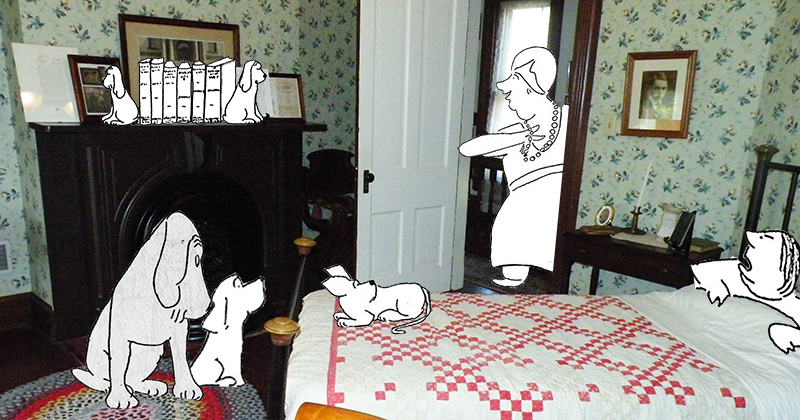 The Night I Slept in James Thurber’s Bed

There are folks for whom reading the works of a beloved author just won’t do. They make pilgrimages to Virginia Woolf’s cottage in East Sussex, down whiskeys in the White Horse Tavern where Dylan Thomas purportedly pickled himself for the last time, get married at Hemingway’s Key West home, though given his track record, that might not be advisable. But would you want to sleep in James Thurber’s bed?

The appeal of what might be called literary tourism seems to be the shared hope that a spark of the celebrated author’s genius might be transferable, though the particulars might be a bit vague. Aspiring writers are drawn to the Starbucks on 23rd and Fifth Ave, where Edith Wharton’s home once stood, where, if nothing else, you are guaranteed a jolt of caffeination. I’m not a believer in the supernatural but there’s a term for this kind of thing: Akasha. The Sanskrit word translates to “unmanifested potential,” but in the Buddhist tradition, akasha refers to the idea that the energy of all the things that have ever happened in a place are always present.

As an “Evening with Authors” series speaker, I was invited to spend a night in the Queen Ann style Victorian that serves as the hub of the Thurber foundation. The home plays a central role in Thurber’s, My Life and Hard Times, and is well established in Thurber lore as being haunted by two ghosts. The house is open for touring and there are those who swear they’ve seen the previous resident who accidentally shot and killed himself during a dinner party and Thurber’s beloved dog Muggs. That might explain why most visiting scribes pass up this opportunity. Also, the accommodations include a single bed, mattress with all the give of a communion wafer, and sheets, true to the period, which have a thread count bordering on exfoliating. My lecture was scheduled on the premises so the short commute enticed me to accept the invitation. 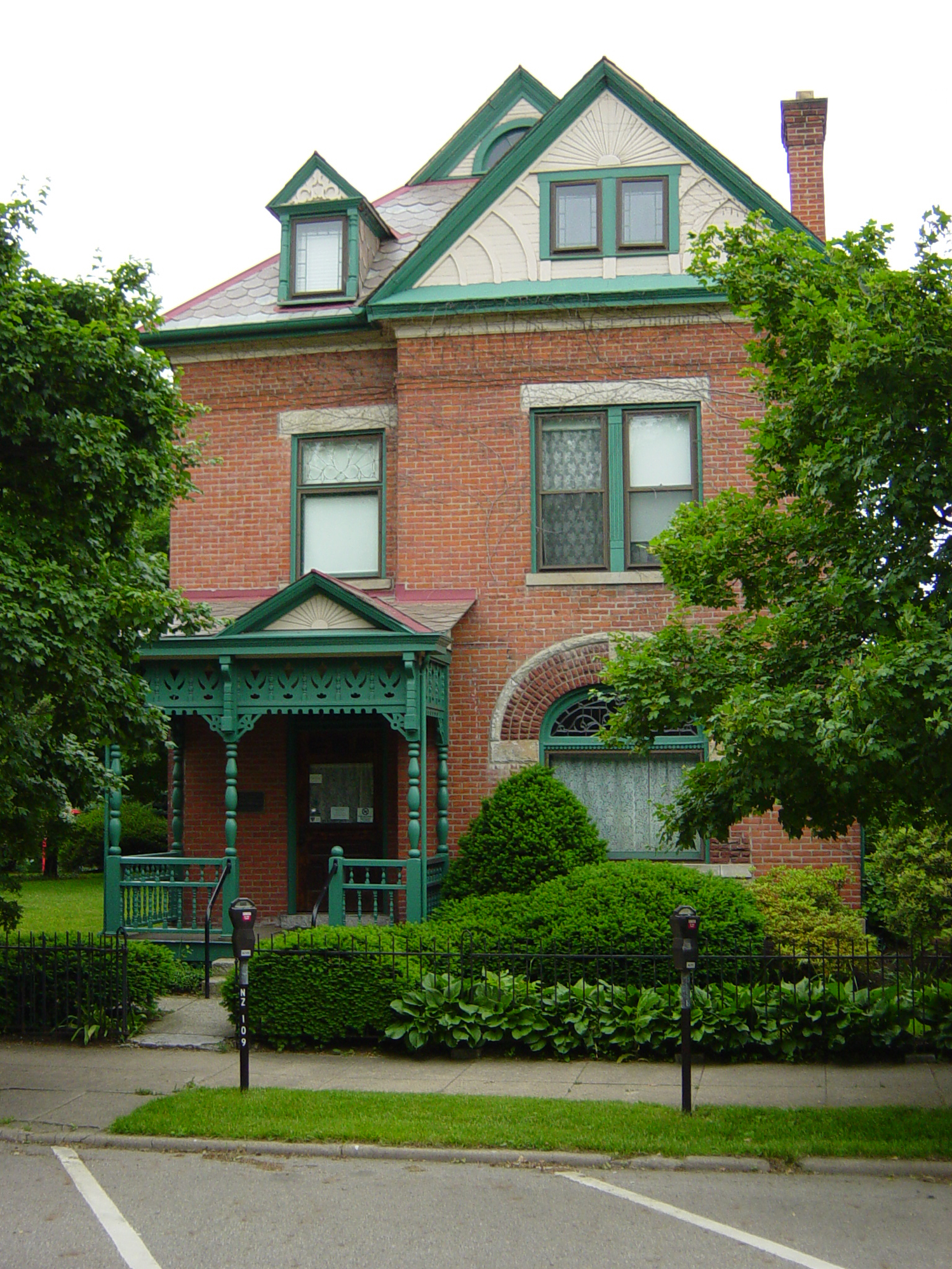 The house is homey, having been restored to approximate the years when Thurber resided there, 1913 to 1917. Visitors are encouraged sit on the mumsy sofas, finger the fussy lace curtains, and play records on the working Victrola. It’s also a dog lover’s paradise: there are life size free standing cut outs of Muggs, statues of Muggs in the garden, t-shirts, cards, and even mugs with Muggs.

The hallways are lined with photographs of the over 400 authors who’ve participated in events. There’s Ian Frazier! There’s Maxine Kingston Hong! Numerous authors are pictured with their beloved hounds. Is that Isabel Allende directly under Dave Barry? For the casual visitor, this might be exciting, but for me, it inspired both comparison and dread. My passage through the gauntlet of literary lights was something akin to Dead Author Walking, the word “fraud” forming over and over in my head until I reminded myself that even the extraordinary David Rakoff, second floor guest bedroom, second row from the bottom just above Lee Child, worried in Half Empty, that “there are no guarantees that this is not the day when the jig is finally up.” 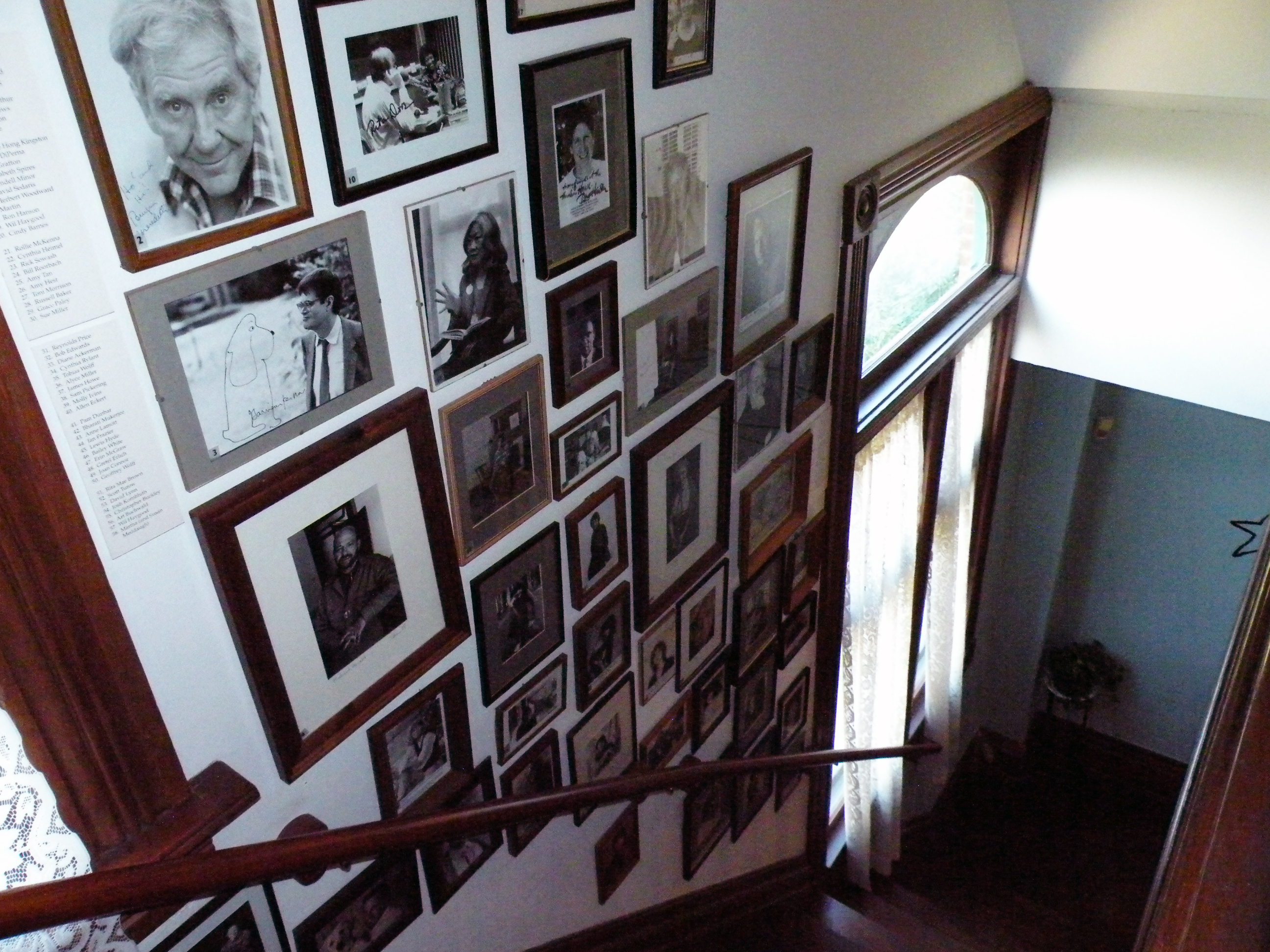 Rallying, I ditched my technology, depositing it in the modern attic writer’s retreat, and armed with a pencil and paper, decided I’d attempt to channel some of that patented Thurberesque domestic hijinks. Truth be told, one of the reasons I’ve never considered myself a devotee, and this is heretical for the true acolyte, is all those romping canines. I like cats, a detail I accidentally let slip to the foundation director who looked at me with an expression suggesting I’d asked to erect a stripper pole in the anteroom of the Pope.

I saw a chance to redeem myself when she mentioned that Mona Simpson, guest bedroom, top row, third from door, next to Justin Cronin, was the only intrepid writer, to date, to brave the bathroom where Thurber, himself, had hidden from an apparition. An admirer of Mona’s elegant prose and personage, I’ve often asked myself when in a pinch, “What would Mona do?”

It wasn’t until I was undressed that I noticed the free-standing tub was located directly under the watchful eye of Nicholson Baker, T.C. Boyle, and 40 odd mostly male writers. Perhaps it was the intimidation factor that caused me to grasp the hot water knob with so much force it came off in my hand. Now, I was at a loss, because of all the things Mona Simpson might do, I was pretty sure she didn’t break James Thurber’s bathtub. Undeterred, I focused on Alan Lightman’s baby blues, bottom row, directly above the tub rim, and began shuttling hot water from the sink in a tarnished metal bucket, probably intended for display purposes only, and tried to imagine a world in which I wouldn’t end up on a literati No-fly List. My brief soak was interrupted by the realization that I’d neglected to bring a towel and had no choice but to use the antique linens that there was no mistaking were placed for display purposes only. 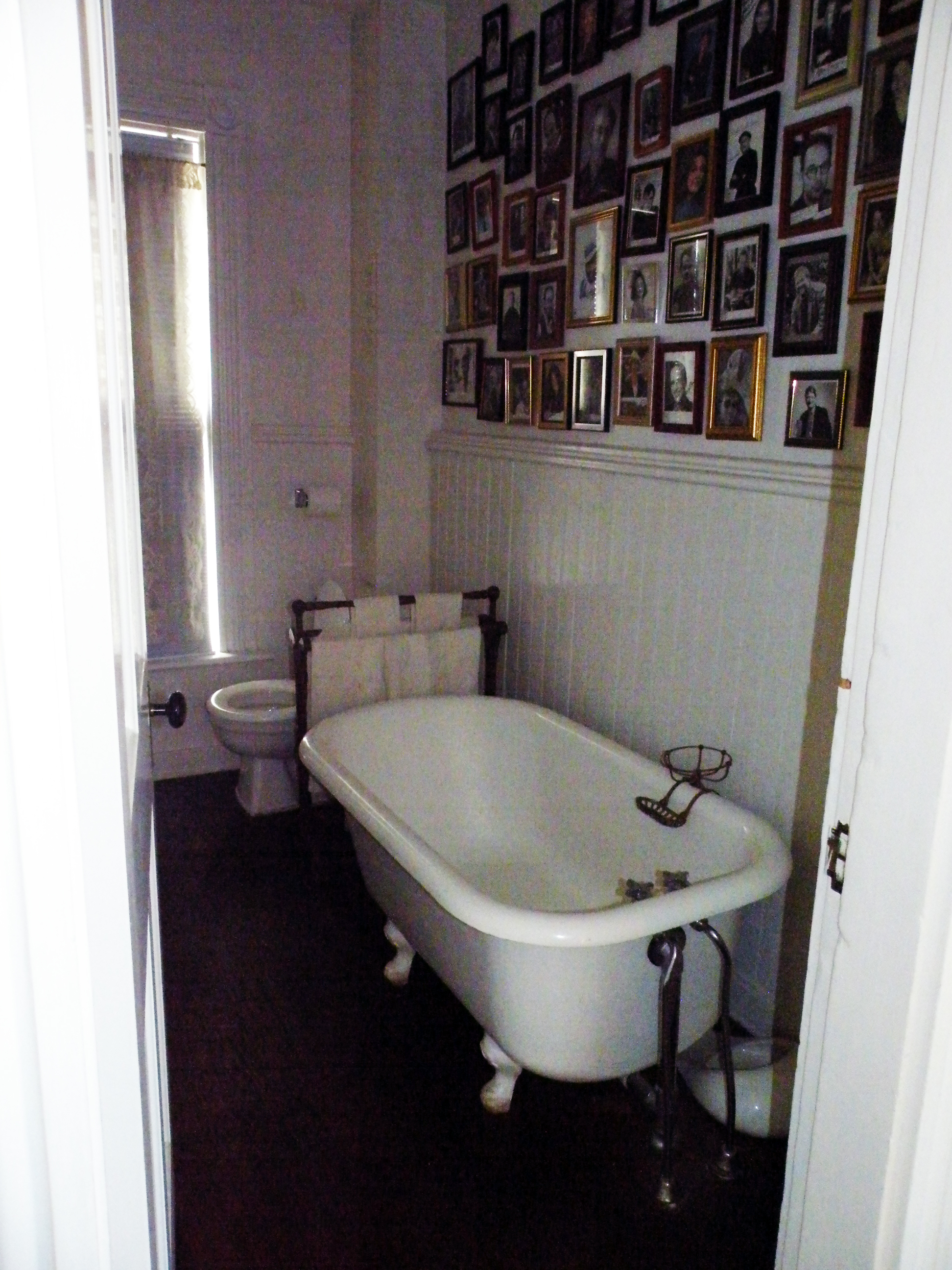 Still damp, I entered Thurber’s bedroom, where the only trace of 21st century was other than that familiar blue internet cord snaking around the base boards. And that’s when the enormity of my miscalculation set in. Thurber’s occupancy was during his time at Ohio State. Do not ponder the akasha left behind in a 19 year old male’s college dorm room. Also, as I’d just sent my own 19-year-old-son to college, I felt confident in the assumption that every item in the room had been picked out by his mother.

I imagined the care that Mary Agnes had taken in selecting the chrome and wood grooming kit neatly secreted in a leather pouch, displayed on the dresser. I’d dashed into Bed, Bath and Beyond, and crammed a plastic shower tote full of items that would probably not last a semester. 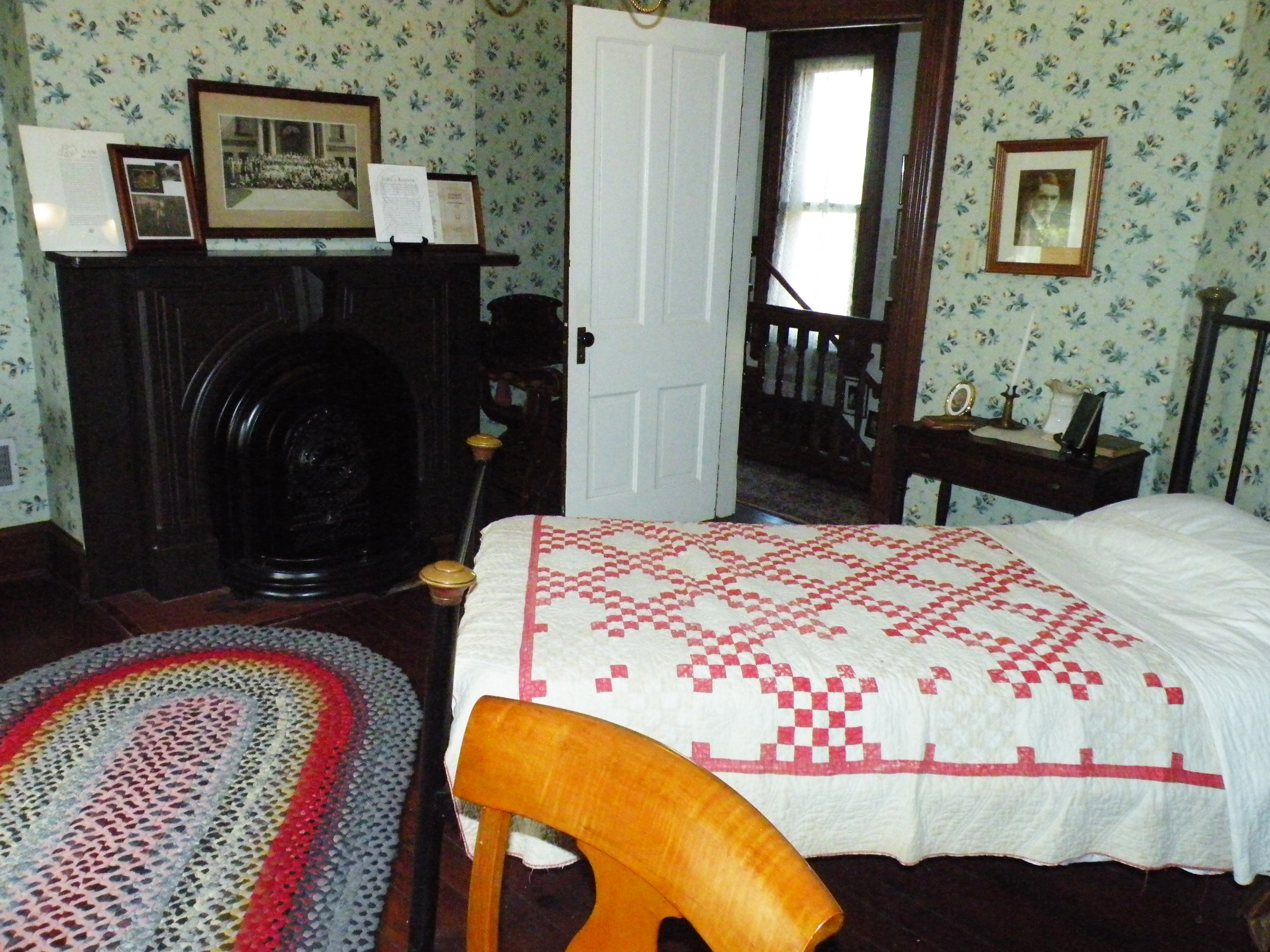 I thought about how Thurber’s mother was his comedic muse and the improbability of my son ever expressing a sentiment like that, although he once secretly filmed me warbling a Judy Collins song, and informed me that his friends had found my rendition hilarious. How her devotion never waned. How at the age of 75, Mary Agnes contacted an eye surgeon to offer the donation of one of her eyes when Thurber’s already compromised sight began to deteriorate.

Seated at the modest wooden desk in front of his manual typewriter, I both envied Thurber the extra time he was afforded absent emails, social media and the temptation of the 24 hour news cycle, and marveled at his prolificness in the era before spell check and red bull.

I contemplated the circumstances that must conspire for a writer’s work to remain relevant 100 years after their passing. Talent, timing, and . . . real estate acumen? In 2003, Robert Gottlieb speculated in the New Yorker that Thurber’s position as a noted humorist might be waning. Since then, we’ve seen yet another screen adaptation of Walter Mitty, and high schools continue to mount punishingly folksy productions of his plays. Surely, akasha aside, this physical space where a coalition of the willing gather to both celebrate and plot promotions of the Thurber ethos had helped secure his legacy. The recent announcement that the ceremony where the prize awarded annually in Thurber’s name was moving from New York to the Ohio home garnered mention in dozens of media outlets. A sense of place still holds value, even in the digital age.

But which writers of this era will have the wherewithal to bequeath their dwellings? David Sedaris, at the halfway point on the back staircase, next to the window that overlooks the four larger-than-life-size canines in the Dog Reading Garden? Maybe. Not only does Sedaris enjoy international popularity, he and his partner have accumulated a number of residences.

I pondered my own wanton desire for immortality. Given my middling amounts of the aforementioned attributes and the likelihood that my home will one day be claimed by a coalition of creditors, I rated my chances somewhere between laughable and highly doubtful. Alas, “devotion and commitment will be their own reward,” is the trenchant advice Anne Lamott, Sedaris adjacent, in the stairwell, it’s worth mentioning is the very one that the ghost ascended in Thurber’s, The Night the Ghost Got In, offered to would be writer in Bird by Bird.

I fell into a satisfying sleep, temporarily relieved of all notions of my future impact and having written only this on my yellow pad: linen isn’t very absorbent, and Amy Tan has a cute terrier. In the morning, I was invited to sign a closet wall, a guest author tradition. I printed my name directly below Rakoff’s, and I mortified to admit, I was unable to resist the temptation to insert “meow” into my signature. Thankfully, no one brought up the busted knob, the wrinkled linen towels, my feline affinity, and if any of the lively crowd at my event were disappointed in my failure to be a literary lion, they were kind enough not to mention it.

Arriving back home, I kissed Alexander Pushkin, my cat, named for the Russian poet whose work, perhaps aided just a bit by the vibrant cultural center housed in Pushkin’s St. Petersberg apartment. Rifling through my bookshelves, discovered several dog-eared copies of Thurber short stories. I devoured them with renewed admiration for their vigor, buoyancy, and economical deployment of wit, which assuredly would have elated Mary Agnes. Perhaps there is such a thing as akasha after all.

Annabelle Gurwitch is the author of four books including Wherever You Go, There They Are (paperback, April 10th). She was a finalist for the Thurber Prize in 2015.

15 Books You Should Read This May 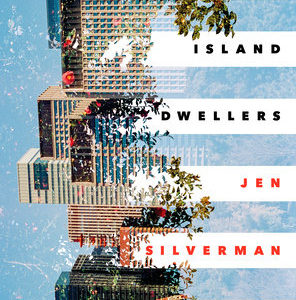 When our marriage ended, I told Seth it was because we had too many White People conversations. He pretended not to know...
© LitHub
Back to top
Loading Comments...