Henry Louis Gates once said that the Harlem Renaissance was “…surely as gay as it was Black.” He was referring to the queer sensibilities of the movement and the barely hidden proclivities of many of its luminaries—Alain Locke, Langston Hughes, Countee Cullen, and Richard Bruce Nugent to name just a few.

In his book, Evidence of Being, scholar Darius Bost writes about the emergence of a Black gay cultural renaissance in the 1980s, and was most prominently represented by writers like Essex Hemphill, Assoto Saint, and arts collectives like Other Countries on the East Coast, Pomo Afro Homo on the West, and performance spaces like the Coffee House in Washington D.C. I am positing that we are in the midst of yet another—a third wave, a new new Black Gay Renaissance. As America grapples with race, sexuality and gender, the brilliance of Black queer creativity is shining a laser-focused and uniquely intersectional light on our troubled society.

Black/Queerness and Queer/Blackness have never been more front-and-center in American culture. From the Academy Award Best Picture film Moonlight, to the Tony- and Pulitzer-winning Broadway show A Strange Loop, to the National Book Award finalist The Prophets, works by Black queer writers are gaining national attention and global acclaim for stories that center the lives of Black gay men. As a Black queer creative in his sixties, witnessing the space that has opened for stories explorations of the lives of Black same-gender loving men, I am both deeply thrilled and ravenously jealous

Having lived through the 1980s, I remember how little space there was for our writing to ever see the light of day. Buoyed by Black women’s creative expression embodied in publications like Barbara Smith’s Home Girls: A Black Feminist Anthology, and Cherie Moraga and Gloria Anzaldua’s This Bridge Called My Back, we knew that we had to write and publish our own stories. This led to the emergence of a dozen or more Black queer anthologies, like those from the Blackheart and Other Countries. But it was a dark time, about to grow even darker.

Death became us. We were writing to save our lives. To tether us to living. Or at the very least, to document our torturous passing in vivid shameless detail before the night sweats, hacking coughs, or purple lesions silenced us forever. We wrote our stories as evidence of our being, as counterpoint to the erasure that we could see happening: brother by beautiful brother disappearing from the landscape.

We didn’t all die right away. We didn’t all die. In 1989, Randall Keenan conjured the achingly beautiful Black gay teen protagonist in A Visitation of Spirits. Melvin Dixon gave us memorable Black queer characters in Vanishing Rooms and Change of Territory. Throughout the 90s, prolific, talented storyteller E. Lynn Harris carved out a market for himself writing a slew of novels, mainly about frat brothers and pro-football players—attractive, upper middle class Black bisexual men. Ten of Lynn’s books made it to the NY Times bestseller list and, ostensibly, made mad bank for Doubleday. Black gay men were hungry for positive self-images, and Black straight women who were intrigued by what came to be known as “the Down Low phenomena.”

Are we writing mainly for queer audiences or has America evolved to the point where gay love scenes no longer shock or dissuade straight readers?

But by the early aughts, Dixon and Harris were gone, along with Hemphill, essayist Joseph Beam, poet Donald Woods, performance artist and diva extraordinaire Assoto Saint, and so many others whose names, dear reader, you probably do not know. AIDS and its evil siblings—drugs, alcohol, and depression—had all but silenced the artistic movements that had nurtured these Black queer writers. Survival took up all our energy. Dying (and escorting the dying on their journeys) was a labor-intensive endeavor which didn’t leave much mental energy for workshopping manuscripts.

Works by these men have become iconic, not only because they were great writers, but also because their production is finite. Finished. Done. They will produce no more staggering poems and hot-to-trot essays. We must sate ourselves with what they wrote, not the promise of what they are currently working on. One wonders what masterworks of American literature they might have produced had their boyish egos had time to subside and their substantial intellects time to ripen.

Since… well… forever American popular culture, and the mainstream publishing industry, has been a bitter behemoth, mainly uninterested in Black queer stories. We’ve lived on the margins, and our writing has been relegated to the periphery as well, trying to catch a break. Trying to get some air.

The protagonist in my recently released debut novel Desire Lines (Querelle Press, September 2022) is an NYU graduate student, obsessed with African and African American novels. But his only solidly queer touchstone is James Baldwin. He eschews the whiteness of the love between David and Giovanni, in favor of the dusky romance of Crunch and Arthur in Just Above My Head—quite possibly the hottest queer love scene ever written. Black men loving Black men is still, as Joseph Beam opined in 1986, a revolutionary act.

When I started shopping my novel to agents six years ago, several of them were intrigued by the story and liked the writing. But their coded email messages were clear. There’s no audience for this. It will be difficult to sell and therefore, it’s a hard (but kind) “no.” Good luck though. It was a bitter pill. I knew my manuscript was good. But to get a book deal, you need an agent. And to get an agent, this person must not only love your novel, but believe they can sell it and recuperate their investment in time and energy. All quite fair and logical.

But for Black gay writers like me whose work has been considered niche, the math didn’t add up to a contract with an agent, or a bidding war for my manuscript, regardless of the quality of the work. All but shut out of the mainstream publishing machine, some Black gay writers have turned to independent presses and self-publishing. Lynn Harris often and proudly told the scrappy story of selling xeroxed copies of Invisible Life from the trunk of his car before it was picked up and reissued by Doubleday. But for most writers, not having the imprimatur of one of the Big Five can sentence you to a kind of literary oblivion in terms of marketing, visibility, and consideration for literary awards.

Since… forever American popular culture, and the mainstream publishing industry, has been a bitter behemoth, mainly uninterested in Black queer stories.

But suddenly the mainstream publishing industry seems to have realized that Black gay men, and those who love us, read. That our stories, when artfully told, are what white people like to call “universal.” At least a dozen novels have been published by Black gay men writing about Black gay men in the last year—all solid and well-reviewed. Several others have been signed to six-figure contracts as a result of an internal push to diversify the book business, as described by Marcela Valdes in a June feature for the New York Times.

While these numbers may not sound like a lot, for those of us who have, for decades, lived barely visible lives, it’s the beginning of a goddam Black queer canon. Hopefully there are now enough successful authors that every stunning new work by a Black queer writer does not need to be compared to James Baldwin, regardless of how heady such a comparison might make the writer feel. We can be described as Jones-esque, Washington-esque, Broome-adjacent.

More will be revealed. Books are many miraculous things, but they are, at the end of the day, products entered into a global market to generate profits. In a capitalist society that values little else, writers and publishers need to think through some important questions. Who wants to read them? Who are they for? Are we writing mainly for queer audiences or has America evolved to the point where gay love scenes no longer shock or dissuade straight readers? Do Black queer authors need to center white characters or love interests to attract a non-Black audience? Are there viable markets for the work in the US and abroad? For podcast, film, and television rights?

I remember riding the 2 train one day in 1994, before it was inexplicably and maliciously transformed into the 3 (if you know, you know.) It was a dark time. AIDS was the leading cause of death for young men in America. Protease inhibitors weren’t yet a thing. For most Black gay men, life seemed capricious and mean-spirited.

Across from me on the littered, graffiti-filled subway car, a middle-aged straight-looking Black woman, not much younger than my mother, was reading James Earl Hardy’s B-Boy Blues. I watched her intently, and she seemed to be enjoying it, musing over it, trying to make sense of its strangeness. Perhaps this was all my imagination, the way you impute thoughts and feelings to strangers on a crowded subway car.

At one point she brought her hand to her mouth, to stifle a sweet laugh, just the way my mother would have done on a crowded subway car. In that gesture I knew that our lives are not so different, our stories not so foreign. We’ve always had things to teach the world about the complexities of life, love, and death. Maybe the world is finally ready to listen. 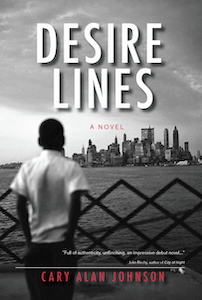 Cary Alan Johnson is an author, activist and Africanist raised in Brooklyn and currently living in Central Africa.  He studied writing with Wesley Brown, Jane Copper Alexis DeVeaux, Randall Kenan, Louise Meriwether, and Susan Scarf-Merrell.  He has a Bachelor’s degree from Sarah Lawrence College and a Master’s degree in International Affairs from Columbia University’s School of International and Public Affairs.  A long-time innovator in national and international queer politics and cultural activism, he was involved in several ground-breaking organizations, including the Blackheart Collective, Gay Men of African Descent, and the International Gay and Lesbian Human Rights Commission. Cary was a founding member of Other Countries, the Black gay arts collective that published 3 volumes of poetry, prose and visual art by Black gay men in the 80s and 90s.  His short stories, poetry and essays have appeared in anthologies and literary journals including Agni, RFD, Joseph Beam’s Brother to Brother and E. Lynn Harris’ Freedom in this Village. A public health and HIV specialist with experience living and working in Guinea, Haiti, Mali, Rwanda, Senegal, South Africa, Ukraine, and Zimbabwe, Cary is currently the director for Population Services International in Burundi.  Desire Lines (Querelle Press, 2022) is his debut novel. 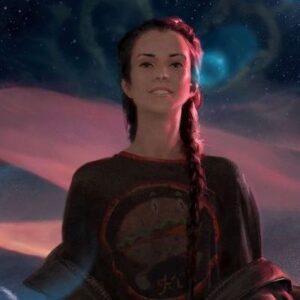 8 Great SF and Fantasy Books for September If your summer TBR stack was full of witches, mechas, and folklore retellings, get ready to spend the fall with… (bone)...
© LitHub
Back to top
Loading Comments...