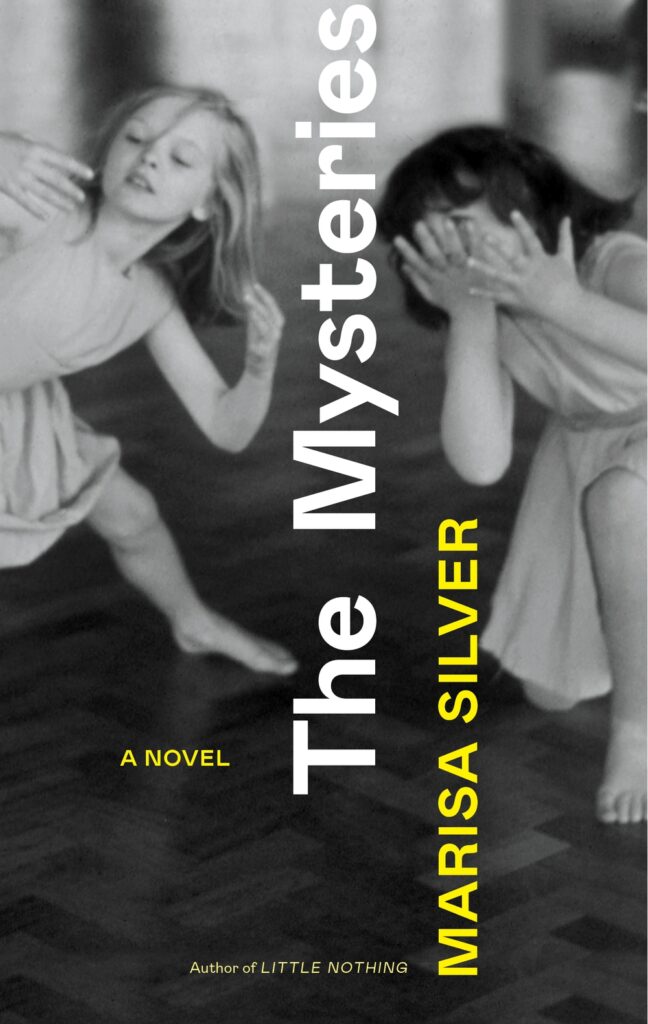 The following is excerpted from Marisa Silver's latest novel, The Mysteries, about two young girls, joined in an unlikely friendship, whose lives are shattered in a single, unthinkable moment. Silver is the author of six previous works of fiction, including Mary Coin, a New York Times Bestseller. Silver has received fellowships from the Guggenheim Foundation and the New York Public Library's Cullman Center. She lives in Los Angeles.

Miggy emerged from the womb enraged by everything it is possible for an infant to be enraged by—the insufficiency of Jean’s milk, the humiliation of diaper rash, being made to wait when she needed to be held and then pounding her fists against Jean or Julian’s chest when she wanted to be put down. The savagery of her desire frightened Jean. Miggy refused the purgatory of her crib and spent her first year sleeping between her parents. Jean would roll over to feed her, then get out of bed to change her, then walk, rock, weep, and sometimes curse her back to sleep.

Jean and Julian were twenty-three years old. They’d married to keep him out of the war. They’d had a baby because she’d run out of pills. There were awful moments during that first year when they were both up at night angrily second-guessing what they had done. If there was no war, would they have married? If they hadn’t gone on a post-graduate, pot-infused trip to Mexico, where life and consequences felt unreal, would she have been so cavalier about birth control? At the urging of her mother, who Jean reluctantly called in the middle of one terrible night, her own tearful Mommyy! pitched to the exact register of her screaming infant, Jean and Julian finally decided to put Miggy in her own room. For three nights, while she wailed, they lay on either side of their bed, the space between their bodies a no-man’s-land mined to explode if one of them were to reach across and seek comfort from the other. To want reassurance would be a betrayal of their child, who they had abandoned and who, at six months, had an uncannily powerful hold over the two people who were charged with her care. Jean felt no victory when Miggy finally gave up and slept. There was only guilt and the feeling that she and her baby were engaged in their own undeclared war.

Miggy’s indignation has not abated with age. At seven, she is a willful, direct girl who feels every constraint as a shackle. She has an unnerving habit of looking her teachers in the eye when she is reprimanded. Her lunchbox routinely arrives home with a little note tucked inside written in instructively rounded letters testifying to one or another infraction. A playground dominatrix, Miggy’s schoolmates find her, frankly, un-fun. Just this past winter, Jean was called into Principal Wells’s office because Miggy had thrown the dodgeball at her opponent’s face. Miggy was in the office when she arrived, and while the principal described the close-range attack, Miggy kicked her legs and looked out the window.

“I’m sure it was an accident,” Jean said. But it was hard to defend her daughter, who seemed neither apologetic nor worried. She was simply bored.

“You give her too much rope,” Jean’s mother declared during her last visit, when she observed the power her granddaughter exerted in the house.

Miggy emerged from the womb enraged by everything it is possible for an infant to be enraged by.

“She’s not a barnyard horse, Mother,” Jean shot back. But her clever retort was only a deflection of her anxiety. As evidenced by her headstrong, ungovernable daughter, Jean is obviously doing something wrong. Miggy’s grievances are always elevated to the level of tragedy. She grabs her hair when she’s frustrated. She stamps her foot when she’s angry. Like a necklace chain that knots itself during the night, her hair is a rat’s nest when she wakes each morning. Combing it out is a daily performance of the mother-daughter tug-of-war: Miggy screeches in pain, but Jean refuses to be put off the task despite, or sometimes because of, Miggy’s exaggerations. And how is it that Miggy arrives home from school each day with one knee sock crumpled around her ankle, its elastic frayed, as if she’s just emerged from a seven-hour brawl?

It’s not an impossible scenario. Miggy does not like most children. She finds them annoying and difficult to manage. Few of them do what she wants without putting up a fight.

“It’s not fair,” she complains.

“One person’s fair is another person’s unfair,” Jean says. But if that’s the case, Miggy argues, hands on her nonexistent hips, why should she not come out on the winning side?

“Because that wouldn’t be fair,” Jean explains.

Miggy roars. She shakes her fist. “I hate you!” she shouts, and then, stunned by the force of her anger, she breaks down in tears. Jean gathers her in her arms. “You didn’t mean it,” she whispers into the top of her daughter’s head, hoping this is true.

The girls are upstairs playing. Jean, holding an unlit cigarette, waits for the coffee to brew in the percolator. The scalding, bitter jolt is her only defense against her craving. She’s trying to cut down, to hold out until lunchtime for the first smoke of the day, but a morning that already feels endless at ten fifteen battles with her resolve. She listens to the sounds above her. Footsteps, then quiet. The squeak of springs as the girls jump on the bed, then silence again. It’s the quiet Jean suspects most of all, and the longer it goes on, the more agitated she becomes and the more she wants to light her cigarette. But then, she hears the uneven rhythm of a rubber ball bouncing off the floor. They are playing jacks. Onesies. Twosies. Cherries in the basket. She relaxes.

Through kindergarten and first grade, Jean tried to goose Miggy’s social life along, calling the class mothers to invite their daughters over after school only to be told that Catherine was suffering from a cold, or that Jennifer had unspecified plans. When she called Maryanne Zielinski, a woman with whom she’d developed a casual playground friendship when the girls were small, Maryanne said that, as far as she knew, Bethanne and Miggy didn’t like each other anymore. Jean was relieved that someone had bothered to be honest, although she had the feeling that Maryanne included Miggy in the mutuality of rejection only out of politeness.

Which is why she feels grateful for sweet, hesitant Ellen, who appeared at the dance studio the previous February. Most of the girls came to class with their mothers. Ellen arrived with a grimly efficient old woman who wore a maid’s uniform beneath a dun-colored woolen coat. She changed Ellen out of her Catholic school pinafore and into her dance clothes in front of everyone, waving away Jean’s offer of the bathroom, as if privacy was a foolishness she had no time for. Jean ordered the class to line up at the barre and started them through a series of warm-ups. Most of the girls in the seven-to-ten-year-old group moved with preternatural self-possession, their posture erect, their expressions poised, as if, as young as they were, they intuited the sly potential of their future forms. Miggy, who must either participate in class or sit in the corner and wait out the afterschool sessions, executed her pliés with throwaway irritation. She has made it very clear that she hates dance. She thinks it is stupid, her all-purpose insult. As dauntless as Jean appears in the face of Miggy’s dismissal of the work that matters to her, there are moments of pettiness, for instance when a mother complains that her daughter has been cast in a minor role in the spring recital, when Miggy’s judgement delivers as direct a hit as the dodgeball she launched with blasé accuracy.

It’s not an impossible scenario. Miggy does not like most children.

Ellen took her place at the barre. She was nervous and uncertain. When Jean instructed the girls to rise to their toes in relevé, Ellen teetered, then lost her balance.

“You don’t have to apologize,” Jean said.

Some of the girls giggled. Miggy was oblivious as she bent over and observed her upside-down and backward reflection in the mirror through the A-frame of her legs.

When it came time for improvisation, Jean instructed the girls to dance like a cloud. “Just let the music tell you how to move,” she said as she put on a record. She listened for a quiet, appreciative moment to Joni looking at clouds from both sides now, her voice rising and falling to the exact levels of desire and doubt Jean felt every day of her life. One by one, the girls made their way across the diagonal stretch of the studio, swaying and bending and leaping, aware of the audience of mothers, who swayed or bent along with their girls. When it was Ellen’s turn, she hesitated. Jean’s heart went out to her. It was awful to be the new girl.

“How about a storm cloud over a rough sea?” she said, encouragingly, but she’d made it worse. Ellen was frozen. Finally, Jean suggested that she march like a soldier. Ellen made her way across the room, her knees chopping up and down mechanically. Some of the confident girls whispered to one another, cupping their hands to their mouths. Jean studied the gestures, wondering at how much the iconography of exclusion seemed embedded in the female body. But she was more concerned for Ellen, who had, in just thirty minutes, made herself an object of scorn.

When Jean called for the girls to choose partners, Ellen ended up with Miggy, who was routinely picked last, the other girls knowing her to be an unreliable and often ruinous collaborator. Jean instructed the students to make their bodies into the shape of numbers. Lying on the floor, Miggy and Ellen each bent themselves into an approximation of a circle with their bottoms touching to form the number eight. Delighted by their success, they held hands for the rest of class. Jean found it hard to draw her attention away from them.

When it came time for improvisation, Jean instructed the girls to dance like a cloud.

Jean pours herself a cup of coffee. She remembers that moment so clearly. It was as if she were witnessing something exotic, although what was unusual was the banality of it all. Miggy was behaving like a girl with a particular friend. Holding hands. Delighted by innocent collusion. Jean could not think of a time when she’d seen her daughter in the grip of such uncomplicated joy.

She checks the clock. Almost eleven. She lights her cigarette.

The Alluring, Barrier-Ridden Promise of the Great Outdoors 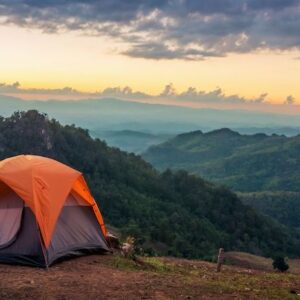 The Alluring, Barrier-Ridden Promise of the Great Outdoors Outdoor retailer REI titled one of its 2017 marketing campaigns with the inviting suggestion “Let’s Camp,” but many...
© LitHub
Back to top