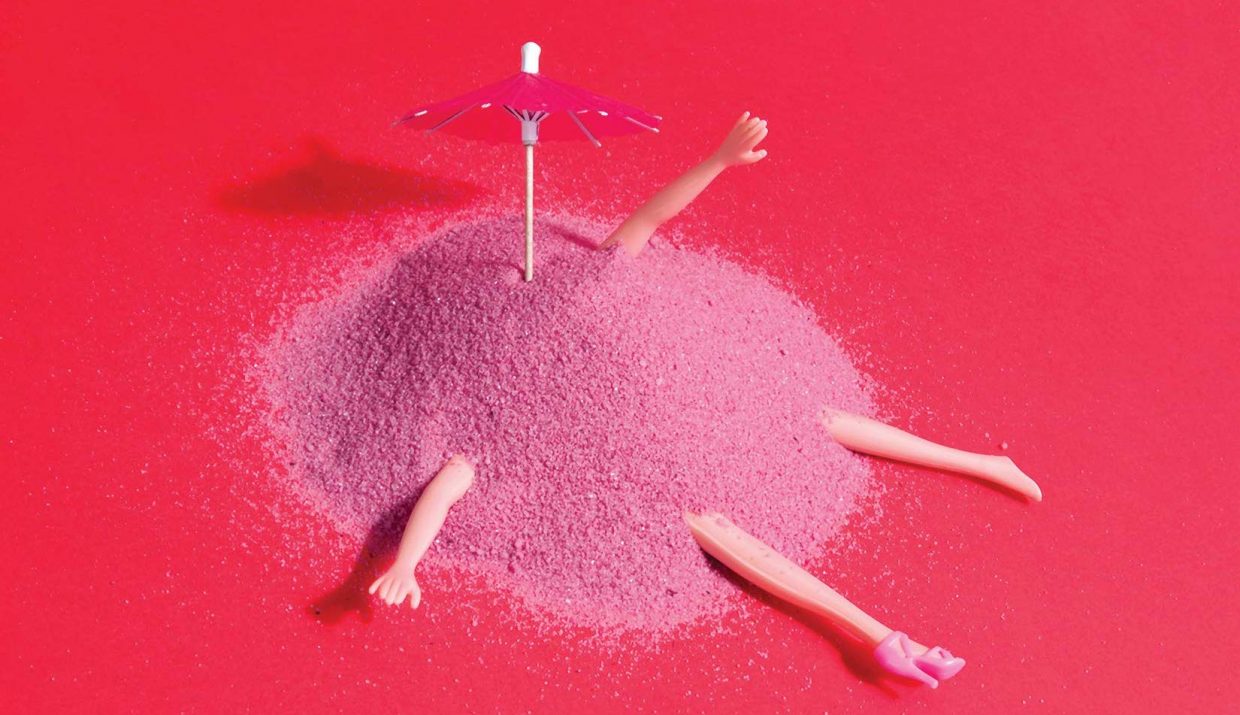 While the personal essay has enjoyed continued popularity, a book-length collection of linked essays, centered on an author’s self or life, is less common than a traditional memoir or novel. A truly successful essay collection can reveal the author processing experiences at many different points in time and through many different lenses. As a writer, I’ve always been drawn to the essay as a form, for its concision, for its ability to highlight an intriguing gap between author and narrator that lends an inherent tension and self-questioning. A collection of essays treating the same or related inquiries multiplies this effect.

The distance afforded by those multivalent lenses can allow an author to regard one’s younger self as a different character, a different persona. This can create an unease or uncertainty that is exciting, and also very relatable to the reader. An author’s ability to forgive that earlier version of herself is especially prevalent in the memoir-in-essays, perhaps because of the extended time period covered as a writer composes essays across years or even decades.

We are lucky enough to be in the middle of a renaissance. Several recent and upcoming memoirs-in-essays use the inquisitive essay form to tell life stories from different vantage points and make the reader question and revel in unreliable narrators and new perspectives. The more traditional memoir focuses on seeking and attaining redemption. The nonlinear structure of an essay collection reveals that there is never easy redemption, never clear resolution: bad things happen for no reason; overcoming one trial does not lessen the need to adapt in the next.

These new, enchanting and powerful collections are a welcome reminder that in our collective state of unrest and unknown futures, there is a comfort in knowing that there is an inherent uncertainty in having the answers. 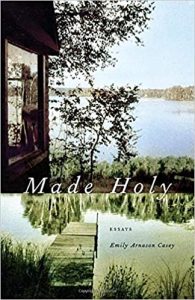 In beautiful, scenic prose, Emily Arnason Casey probes her middle American childhood from the stance of different venues, times of life, and primary characters—a family cabin and repository for memories both happy and sad; a little sister who grew up and wasn’t a sidekick anymore; a mother who didn’t reveal the family propensity to alcoholism until it was too late; an aunt who succumbed to the illness’s lure. In a spiral-like structure that keeps returning to a central and unanswerable question—how, and why, must this family battle the draws and effects of alcohol addiction—Arnason Casey tells a poignant story of a “normal” family that through its quirks and desires must find a path to survival. The author finds solace in nostalgia and a way forward by examining the errors of the past and by embracing, as a mother, the promise of the future generation. Her probing and compulsive need to question reminds us that alcoholism has no simple etiology, and that its cures are as individual as they are elusive. 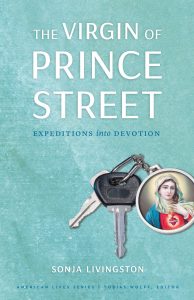 At a time of dwindling religiosity, Livingston finds herself wishing for greater connection to her Catholic roots while also exploring the physical space of the church in upstate New York that made memories for her as a child. Because of religious attrition, the church that she grew up in becomes the gathering space for dozens of rescued saint statues deaccessioned from other churches nearby. Livingston embarks upon a quest to find a missing Virgin Mary statue, that moves not in straight lines but elliptically, following a parallel physical and emotional journey that is an exploration into faith, Catholicism, and a desire for spiritual connection on modern terms. In examining the sustained power of a central icon of the Catholic church and an object of personal, sentimental attachment, Livingston’s linked essays highlight the irresolvable paradox of modern religiosity—that the seeker must follow an uncharted middle pathway when the old texts and their tropes, their patriarchy and their strictures, necessarily fall away. 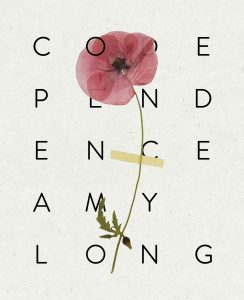 In this haunting and troubling book, Long revisits scenes and anecdotes from her  boyfriend’s heroin addiction and her subsequent dependence on opioids for chronic pain. Formal experiments such as essays disguised as lists, prescription forms, and medical reports are interspersed among scene-driven recollections from different points in time: the author’s first introduction to the drug; the allure of an older addict; attempts at recovery. The grounding presence of the author’s supportive mother is offset by the narrative’s tragic other constant—the euphoria and escape offered by the drug. By eschewing a linear narrative structure, Long illustrates the difficulty of achieving recovery and puts lie to the myth that addiction is a logical disease that naturally ends with a cure. In its very form, this memoir undermines the narrative so prevalent in media treatments of this illness—that in order to trounce the beast, the individual suffering from addiction need only attend a recovery program. Having written about and witnessed my own sister’s decades’ long struggle to overcome opioid addiction, I was drawn to Long’s wisdom in portraying addiction not as a problem to be solved so much as a complexity to be observed and penetrated. 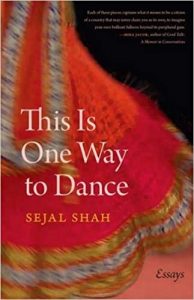 Sejal Shah, This Is One Way to Dance
(University of Georgia Press)

The Indian-American author continually revisits her troubled relationship to her American identity through layered essays treating her bifurcated Indian and American past. Exploring her family’s immersion in Gujarati subculture when she was a child growing up in Rochester, New York; her experience as one of few people of color in her MFA creative writing program; and many family weddings in which she must confront her presumed future as a desi bride, Shah questions her place in both American culture and the thriving American-Gujarati subculture. By placing dates at the ends of the essays, it is suggested that her complicated and lifelong conflicts about race and cultural identity can be told chronologically. But, as she explains in her introduction, many essays had multiple end dates after having been revised and reconsidered as time moved forward. The multiple end dates elegantly upend the notion that a rational, hypothesis-thesis-synthesis structure can encompass the complexities of identity and belonging. Shah’s choice to write non-narratively about her conflicts of identity provide insight for anyone raised with a dual or multiple cultural identity—anyone who may, at different points of time, feel a greater allegiance to one culture, another, or a never straightforward amalgam of many. Who we understand ourselves to be, Shah’s book tells the reader in subtle ways, is not a fact so much as a moving target, an unending query. 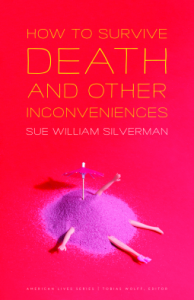 Sue William Silverman, How to Survive Death and Other Inconveniences
(University of Nebraska Press)

Silverman is the author of three previous memoirs. In How to Survive Death and Other Inconveniences, she tells her life story through the lens of an obsession with death and the desire to come to terms with the inevitable but often avoided reality that in the end we are mortal. The essays begin with a chronological life story of growing up in New Jersey and encountering American culture’s death-avoidance, but then take a swerve when several brief but elusive mentions accrue into an account of a rape at a young age and a discovery that her memory of the event connects to her fixation on death. A chronological structure gives way to a thematic plot, in which Silverman seeks to confront her topic through reporting, immersion, and reflection—for instance by visiting a morgue, exploring mythological figures associated with death, and recollecting a family funeral. The sophisticated writing and structure make the whole greater than the sum of its many fascinating and worthy parts. Silverman’s essays continually reveal the irrational functioning of memory and how it connects our pasts to our worldviews. Honoring subconscious logic, How to Survive Death and Other Inconveniences makes the gambit that the mysteries of the self are both keys to understanding and uncertainties to be celebrated. We become who we are without being fully conscious of our choices—probing those choices won’t give us easy answers, but the discoveries along the way will be illuminating and well worth the necessary befuddlements. 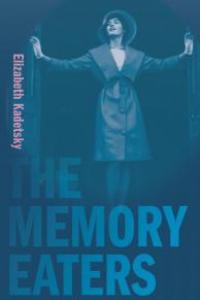 Elizabeth Kadetsky is author of the memoir First There Is a Mountain, the short story collection The Poison that Purifies You, and the novella On the Island at the Center of the Center of the World. A professor of creative writing at Penn State and nonfiction editor at the New England Review, she is the recipient of fellowships from the Fulbright Program, MacDowell Colony, and Vermont Studio Center. 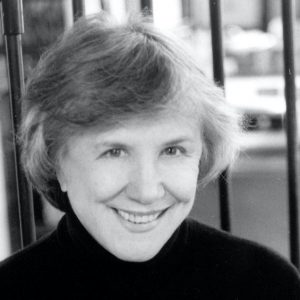 Books brought us together, which seems right. Working on a biography of Gloria Steinem, I met Mary Perot Nichols, who had also...
© LitHub
Back to top
Loading Comments...