In a Vermont assisted living facility, Farnsworth “Farnie” Fowle leaned forward in his wheelchair as he struggled to hear me during our video conference. Nearly 3,000 miles away in Southern California, I leaned toward him too, and raised my voice, the two of us reaching for each other, and the shared past of a century earlier, far from the verdant maple trees that towered outside the windows of his room, and the drought-shriveled shrubs of mine. At 100 years old, the retired foreign correspondent was from another era: still dapper in his navy blazer atop a collared shirt, and charming in his formalities.

“I very much enjoyed living in the Near East, and am always glad to meet somebody from that area,” he said from the Wilder home. The son of American missionaries, his diction sounded as if it were lifted from the pages of the early 1900s consular documents, newspapers and memoirs about the region that I pored over for my research. Of course, it did. He was born in Istanbul, before the founding of Turkey, back when it was the capital of the Ottoman Empire. Grappling with chronic kidney disease and other ailments, though, every word he now uttered required great strength.

I picked up my book, The Hundred-Year Walk: An Armenian Odyssey. Farnie was already part-way through the story, which chronicles my grandfather’s survival of the Armenian genocide, and my quest to retrace his steps. Farnie’s then hospice doctor at Bayada Home Health Care, John Saroyan, had introduced us, after letting me know how much it was affecting his terminally ill patient who was born during the World War I massacres, and raised in their aftermath. The narrative seemed to be unlocking Farnie’s world of long ago, a reel in black-and-white with missing scenes suddenly playing in full color again.

His father, Luther R. Fowle, had initially told him about the 20th century’s first large-scale genocide, in which more than a million Armenians, Greeks and Assyrians lost their lives. It’s a crime Turkey still denies occurred, and continues to haunt so many Armenian families, like mine. Farnie was proud of his father’s life-saving role: As acting treasurer of the American Board in Istanbul, Luther R. had distributed aid to the starving and needy refugees. My Armenian grandfather, Stepan Miskjian, was one of those who desperately needed help.

With Farnie’s vision failing him, his aide and doctor had been reading him my book—and now I would too. “When they read to me, that’s a real luxury—red-letter days,” he said haltingly about his love of books, sometimes searching for words or facts that hovered just out of grasp. Otherwise, time just seemed to pass, he explained, as he moved through breakfast, lunch and dinner, and sleep.

Turning to page 179, I fumbled over my words, knowing both the expertise of my listener and the preciousness of time. I also knew that I was about to mangle all the Turkish words Farnie would know that were sprinkled throughout. Together now, we returned to October 1916, as I began to read aloud my grandfather’s words from the journals he kept:

“’Whatever happens will happen,’ Stepan thought. ‘I’m not afraid of death.’”

Guards were about to massacre my grandfather’s caravan of thousands. They had been marched to the desert in what’s now eastern Syria, the area now controlled by the Islamic State, and scene of new humanitarian crimes. As night drew closer that fall day, there was no escape for the nearly naked deportees, forced to this stretch of land. The terrain reached out, flat and boundless in all directions, without a tree to hide behind. Farnie cupped his hand around his ear, framed by wisps of gray hair, to better hear my voice. As my grandfather counted down the hours left, I felt increasingly uncomfortable about reading Farnie this selection. Was I reminding him of his own mortality? I hoped not.

Farnie listened intently, his left cheek turned to the screen, his expressive brown eyes fixed at a point in front of him. “Why did you say Chechen?” he interrupted. He was right; I hadn’t properly foregrounded this part since I’d picked up the story mid-stream. I was caught off-guard. Only a few moments earlier when we’d begun our conversation, he had trouble remembering basic names and dates, but now the longtime reporter had emerged, methodically assessing the context, syntax and veracity. It was just what his doctor had told me about his memory. He knew the streets, train stations, leaders scattered throughout the chapters. To him, they weren’t arcane historical figures or foreign places, they were associates of his father, or places he’d visited. As I continued, the emotion I’d felt during the first reading of my grandfather’s journals unexpectedly rose to the surface, and came out through my words. I vocalized the caravan’s cries with desperation: “God! God! God!”

Looking over, I saw Farnie deep in thought. Just behind him sat his doctor, John Saroyan, who wiped a tear; he was of Armenian descent and had lost both his great-grandfathers in the genocide, all four of his grandparents winding up in orphanages.

Dr. Saroyan had first learned of his patient’s history during a routine bedside visit as Bayada’s hospice medical director. He had tried reading Farnie pieces he’d written for The New York Times, where he was once a reporter. Farnie didn’t remember anything. Then the physician read to him about my grandfather since he had just finished the book himself. “It was like Fantasia,” Saroyan had told me. “It was like Mickey with the baton, the images were just coming. I think if I had asked him if he could have tasted and smelled the Euphrates, he would have said yes.” 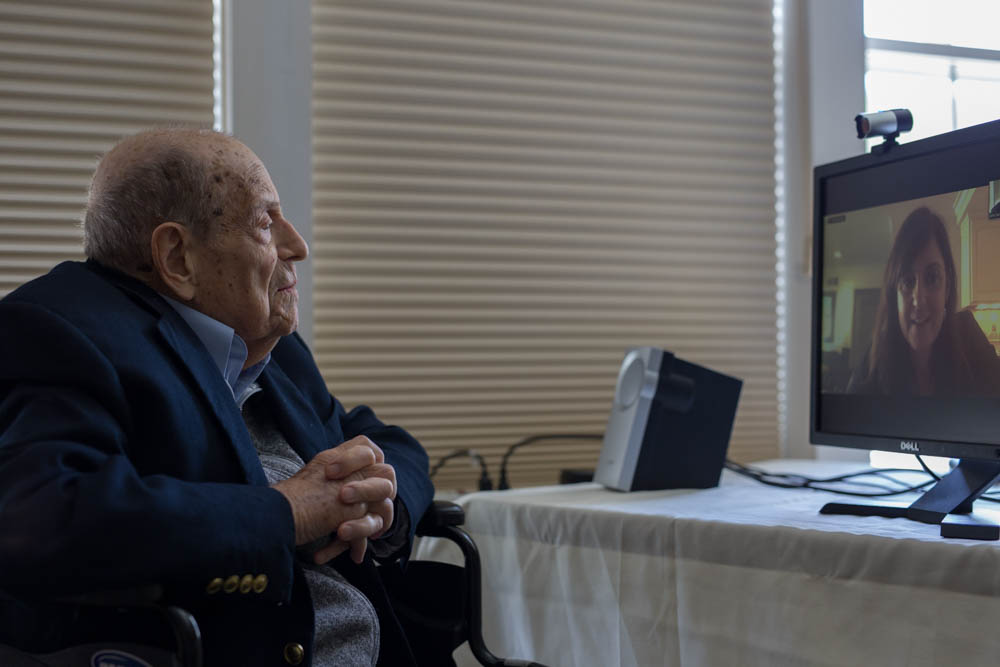 Farnie talking to the author. Photograph by Kristin Stein Saroyan.

Farnie’s wife, Phyllis, had been his greatest reader. When he spoke of her, his face lifted into a smile, and I could glimpse the dashing young gentleman she had fallen in love with while they were both working in Germany. She had given voice to the printed words when his vision first faltered, every night picking up from the chapter where they had left off. Though they never had children, for their nearly 50 years of marriage, she was all he ever needed, he explained. Peeking into his life, I could see how much the universe grows smaller after illness or losing a beloved spouse, as he did in 2000; how even a peripatetic globetrotter who had climbed into foxholes as a World War II reporter for CBS Radio under Edward R. Murrow, and had covered the fall of Rome, would someday need another window into this vast and changing world of ours.

Along with a portrait of Phyllis, a stack of books sat by his bedside, as if waiting for a caring hand to open one. “Music and books are his life,” wrote his nurse at the time, Janet Stephenson, in an email. “He often can’t remember what he is reading, but in the moment, he is right there in the book.”

When listening to my grandfather’s story, Farnie sometimes closed his eyes. Dr. Saroyan says he has long witnessed the benefits of music on his patients, as both a clinician and a musician, and it made sense that the act of reading aloud a book would also deeply affect them too. For the past 25 years, Dr. Saroyan has been performing in assisted living facilities, at first for his grandmother, a genocide survivor. Watching her struggle with pain and trauma informed his decision to specialize in palliative and hospice care. He wanted, in his own way, to help ease people’s suffering, and music can be a powerful analgesic. He has seen listeners laugh and cry. “It’s an ignition of memory; it’s deeply tied to experience,” said Saroyan, who plays the banjo and guitar. “Even in the late stages of dementia, music can bring about a pleasant facial expression, a more relaxed body position, even a smile.”

With Farnie that day, I jumped to a point later in the book. Following my grandfather’s escape from the caravan, a Muslim Arab Sheikh took in my Christian grandfather and gave him refuge, despite their difference of religion and ethnicity, and the rhetoric of the time that the Armenians were dangerous traitors, siding with Russia during the war.

While I read, Farnie grew more animated. He recalled how many Turks he knew had tried to help the Armenians, and how he’d toured the refugee camps of Armenian orphans in the Middle East. He later remembered, too, seeing the empty and abandoned homes that once belonged to those killed, or driven away. As we broke into discussion, it became a singular kind of book club. This man who had lived through two world wars told me he wanted to promote the message of peace now, of acknowledging the pain of the past, and reconciling again. And more prosaically, we even talked about the food the sheikh had given my famished grandfather: pekmez, a type of syrup made from grapes, which Farnie has had. At one point, Farnie began to sing an Armenian song, his voice powerful and strong.

Our talk was going long, and Farnie asked his caregiver for fruit juice. I could tell he’d grown tired and I was concerned he’d want to continue in spite of it. He had said he’d always had a collector’s attitude towards information. “I’ve been a witness,” he stated matter-of-factly, eerily reminding me of my grandfather’s own words.

Sharing and remembering a century’s worth of information had been meaningful for him. When he put into words why, slowly and measured, I nearly choked up. “It makes me feel important,” he explained. As we signed off, I knew this would be the most significant reading I’ll ever give.

Dawn Anahid MacKeen is the author of The Hundred-Year Walk: An Armenian Odyssey, which will be out in paperback in January 2017. Previously, she covered health and social issues for Salon, SmartMoney, and Newsday. Her work has appeared in The New York Times Magazine, ELLE, The Sunday Times Magazine (London), Los Angeles Times, and elsewhere. She lives in Southern California.
http://www.dawnmackeen.com

Wu-Tang's RZA on the Mysterious Land of Shaolin: Staten Island 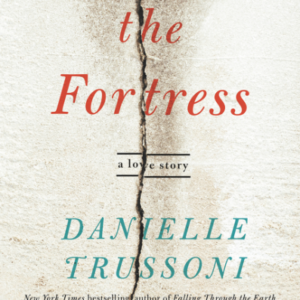