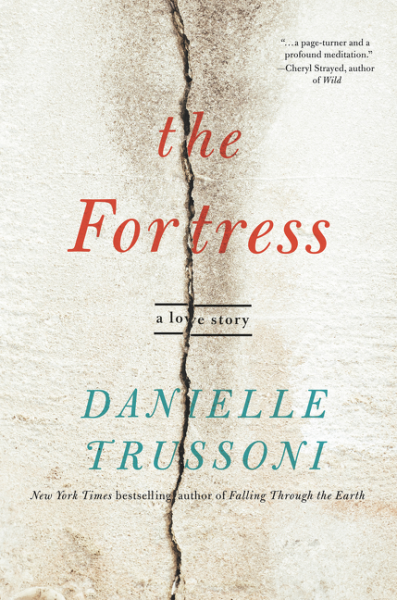 The following is from Danielle Trussoni’s memoir, The Fortress. Trussoni is the author of the critically acclaimed memoir Falling Through the Earth, selected as one of the Ten Best Books of the year by the New York Times Book Review. She is also the author of the internationally bestselling novels Angelology and Angelopolis, which have been translated into more than thirty languages.

How could I be so stupid? How could I be so naïve? How could I be so dumb? These self-accusations became a kind of mantra. I blamed myself. Nikolai had left with our daughter, yes, but I had allowed it to happen. It was my fault for leaving. Fear and worry and outrage—these emotions swirled through my mind, causing static in my thinking. I left ten, maybe more, voice messages, each one as impassioned and outraged as if it were the very first. I called and called his cell phone, believing that eventually he would answer. Finally, after half an hour, he picked up.

“What do you want?” he said. There was not a hint of emotion in his voice. It was as if he were running out to the supermarket for milk.

“You need to turn around and go back home to Aubais,” I said, trying to calm down. “Andy is there waiting for you.”

“I’m not going back to Aubais,” he said.

“This is kidnapping—you know that, don’t you? Kidnapping.”

“I don’t call taking my daughter to visit her grandparents kidnapping,” he said.

“Driving an eight-year-old girl thousands of miles across Europe without her mother’s permission after taking her passport by force is kidnapping!”

“Don’t be hysterical,” he said, and I imagined him rolling his eyes.

“If you do not turn the car around and bring Nico back home right now, you will understand hysterical. My father is waiting for her. He’s going to call me as soon as she’s home. If I don’t hear from him in one hour, I’m calling the police.”

“Go ahead,” he said. “I’ve already been to the gendarmerie.” This floored me. I gasped. “You have?”

“Your lawyer? You have a lawyer?”

“My lawyer said that it is perfectly legal for me to take my daughter out of France for a visit during the vacances de Pâques. My lawyer suggested that I file a report with the police, so that it is clear that I am taking Nico out of the country for a visit.”

In the perfect opening to his endgame, Nikolai had anticipated my next move before I could make it. Now, even if I called the police, even if I went there to file a report, they would tell me that Nikolai was just taking Nico for a visit. I was cornered.

“When are you coming back?” I asked, hearing the defeat in my voice.

“In a week. Ten days at the most.” “How am I supposed to believe you?”

“Honestly, I don’t give a damn if you believe me,” he said. “I prefer not to speak to you right now. Your aggression is beginning to upset me.”

“Let me talk to Nico.” I was on the verge of tears, but I couldn’t actually cry. Something was holding my tears back, some horrible constraint that, I realized as he handed the phone to Nico, was terror.

The phone scratched, and suddenly it was filled with the radiant sound of my daughter’s voice. “Hi, Mama!”

“We just stopped at McDonald’s. I got a Happy Meal.”

“That’s great,” I said, trying to sound as if everything were normal. Nico had no clue what was going on behind her Easter trip out of France. She sounded cheerful and excited, and why shouldn’t she? She was going on an adventure with her dad.

“I hear you’re going to Grandma and Grandpa’s house for a visit?”

“To Venz,” she said, and I realized she was trying to pronounce “Venice.” Why on earth were they going to Venice when Nikolai had told me that they were going to Bulgaria? What in the hell was going on? What other secret plans had Nikolai made?

“Nico, give me the phone,” Nikolai said in the background, and abruptly, before my daughter could say good-bye, the phone went dead.

I later learned they left France on the autoroute, driving past Nîmes, Marseille, Nice, and Monaco, traveling along the Côte d’Azur into Italy. I knew the route well—the pebbled beaches and the rocketing palms and the sky so blue and hard that it seemed like blown glass. I knew a place to buy sachets of lavender that left the car with a sweet herbal scent, and I knew another place where the highway cut so close to the water that the car could tip into the immense green sea. I knew a bistro in Marseille that made good bouillabaisse and a bar in Nice with a postcard view of the sunset. I knew the spots of the Fauvist painters, those rocky terraces where sun and sea created pigmentation so bright it seemed pixelated, artificial. I knew the number of tolls on that road—four between Nîmes and Nice—and I knew the amount of change I needed to toss to pass through them. But I didn’t have a clue as to how to stop Nikolai from stealing Nico away on this road.

The facts I gathered were these: Nikolai went to the bank to withdraw thousands of euros in cash from our joint account; he went to see a lawyer; he stopped by the police station to file his report. Then he packed the car and left France.

I put this timeline together over the course of many weeks, examining the paper trail he’d left behind. The bank statements showed that he’d bought something from our telecom company (a new iPhone 4), and something from the pharmacy (most likely his pills), and something from the tabac. They showed that he’d filled the car with gas in Sommières and that he’d loaded up on groceries at the Carrefour. He had rushed to get out of the country, and I support this impression by the fact that a speed-control camera clocked him driving fifty kilometers over the limit near Nice. A ticket arrived some weeks later with the license-plate number of our 2009 silver Citroën C5, recording the place and date and excess speed.

When I looked over the speeding ticket, I imagined Nico in the backseat, the window cracked, the wind unsettling her long brown hair. I imagined Stinky, her stuffed hippo, tucked under her arm. It was a warm spring in the South of France, and the smell of the sea might have made her think of the days we’d spent on the beach together, long afternoons of sand castles and beignets. Maybe she was excited to be on the road; maybe she thought the whole thing was fun. I knew how much she liked to look at the stamps that inked her passport—Bulgarian and American and French stamps—counting each one as she recalled a detail of the places we’d been together.

I called Nikola i back, and my call went to voice mail. I tried again, and then again, but he didn’t pick up. Many more times that weekend, I called, and I always I found myself listening to a recorded message telling me, “Je suis désolée la personne que vous recherchez n’est pas disponible pour le moment.” I left messages, a dozen messages, so many pleading and angry and fearful messages, all of them asking for details of what he was doing, and when I could speak with Nico, and why he was doing this. All my messages went unanswered.

The blanket of silence and secrecy around Nikolai’s movements led me to imagine the worst. I became so wrapped up in the dark imaginings playing through my mind that I couldn’t eat or sleep. I was dizzy when I stood up and dizzy when I lay down. I wanted to do something, anything, and so I went to the music festival, and I went to a dinner party thrown by a friend of a friend, moving through the weekend as if in a trance. My impulse was to get on a plane and fly to Bulgaria, but I wasn’t sure they were even there, as Nico had said they were going to Venice. And after Nikolai’s report at the gendarmerie, there was no point in going back to France to get the police involved. I was stuck.

I set up my laptop and began to write backtracking messages to Nikolai, begging him to call me so that we could “work things out.” I wrote text messages telling him we needed to look at the “bigger picture” and that I still loved him and wanted him back. Those texts are lost, but reading my e-mail messages now, I see that my tone was conciliatory, desperate, pleading. At one point I wrote,

“It is becoming very clear to me that you do not

want to speak to me and that you have decided that you don’t want to work things out. If our marriage is over, I need to know your plans so that I can start figuring out what to do next.”

It is incredible for me to read this now, because we had decided what we were doing—getting divorced. It was plain that our marriage was over. I had a lover. Nikolai had a lawyer. We were not going to work things out. All that had been decided before.

I closed my e-mail message to him with, “I would greatly appreciate it if you would call me so that I understand what you are doing. I also need to understand what you want from me and how we will end this quickly without fighting and anger.” Without fighting and anger? How could there be no anger after what I’d done in Paris? How could there be no fighting after he’d driven off with Nico? I was furious and ready to go after him. And yet I was using a gentle, reasonable approach. I was remaining calm. And I see now that this pose was a new incarnation of the Angry Warrior, one used to lure her enemy close. By being nice and offering a white flag, I could woo him into bringing Nico back to France. He was playing dirty, and so I was playing dirtier. This ruse marked me as a true Machiavellian or, to put it a better way, I was being a manipulative bitch.

But when Nikolai wrote back, it was clear that he wasn’t buying it. He said that it was baffling to him that I would think that we could work anything out. There was nothing to work out between us. We were getting divorced, and that was that.

From THE FORTRESS. Used with permission of Dey Street Books. Copyright © 2016 by Danielle Trussoni.

THE GREAT WAR Geoffrey Nutter has always been among the go-to poets to relish an unfettered language of almost pure play, music, color,...
© LitHub
Back to top