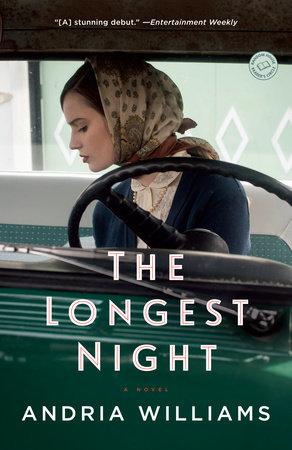 The following is from Andria Williams’s debut novel, The Longest Night, now available in paperback. Williams received her MFA in creative writing from the University of Minnesota. She and her husband, an active-duty naval officer, are currently stationed in Colorado with their three young children.

Nat was the first one out of the car. She stepped into the dirt parking lot, her low-heeled shoes printing chevrons into the reddish dust. Ahead of them the lake shimmered blue, dancing with sun. They were somewhere in northern Utah, one day out from their final destination in Idaho Falls, and not a moment too soon.

For the past two and a half weeks they’d been driving cross-country: Virginia to Idaho in the ’55 DeSoto Fireflite her husband, Paul, had bought used a couple of years before. Paul was starting his next army tour in Idaho Falls as an operator for a small nuclear reactor. You moved for Uncle Sam, he told Nat, but you still found your own transportation. So, with their two young daughters packed into the backseat they headed west, sleeping in hotels and farmhouses and even, on two regrettable nights, in the car. Nat was beginning to feel that they might be vagabonds forever, nomads wandering the rough western states, eating crackers by the side of the road in a hot wind, loitering at the edge of decent farmers’ land, scrambling after barn kittens, urinating in gas stations.

Paul opened his driver’s side door and stepped out. He bent to help Liddie squeeze past the seat, a damp spot showing at the small of his back. Liddie was one and a half, and she hit the ground running, hustling toward the beach with a toddler’s steady, impressive lack of hesitation or common sense, belly leading the way in pink cotton overalls. Samantha, who was three, scampered out through the passenger seat, her rumpled pale-blue dress flapping around her legs. Nat followed them, shading her eyes to the sparkle of the water and the glow of pent-up energy that seemed to rise from their daughters’ small bodies like incandescence.

The round crystalline lake before them was held between mountains as if cupped in a palm. The spring air smelled sweet, and Nat was filled with a sudden stirring of hope.

She smiled up at Paul. “We just might make it,” she said.

Paul’s brown eyes were weary, a little bloodshot. He scratched his head, two brisk strokes over his close army haircut. “Let’s hope so,” he said. Then he smiled back. “How you holding up?”

“Good,” she said. They trailed after the girls, Paul rolling up his shirtsleeves, Nat’s shoes dangling from her fingers.

There was a faint, distant splash up the curve, followed by muted applause and whistles, and Nat turned her head. She spied a rock outcropping that jutted into the water and was surprised to see the silhouettes of people atop it. A moment later one of them sprang off the end of the rock, sailed downward in a gentle parabola, and entered the water with only the slightest sound.

“Rock divers,” Nat said as the head bobbed up. She checked the girls’ location—still a good distance from the water’s edge, their twinlike heads of chocolate-brown hair mingling as they bent to stack rocks—and turned back to the jumpers. The dazzling water, the leap and burst were so familiar that her heart hurt. She had grown up in San Diego; swimming and diving were the things she’d loved. Some of her strongest memories were of leaping off the Sunset Cliffs in Point Loma, watching the white froth swirl before plunging in.

Paul was watching her from the corner of his eye.

“Going in where?” he asked, the suspicion in his voice showing he knew her well enough.

His forehead crimped with uneasiness, and a pulse of guilt ran through her. “That’s crazy,” he said. “You’ll be wet on the drive.”

“With this air? I’ll dry in half a minute. Here, hold my shoes.” Before he could argue she handed them to him and jogged through the sinking, rocky sand, pebbles coating her calves and flinging up around her knees.

She turned and waved. “It’s okay! Be back in a second.”

The girls hopped and cheered beside their father as she poked her way up the rock. Even from a distance she could see Paul’s disapproval, the tenseness of his shoulders and straight line of his mouth. For that one moment she didn’t care.

When she reached the top she saw the jumpers, two men and two women. They lounged on the side of the rock now, sun-warmed and serene. They seemed about Nat’s age, twenty-four, and she wondered at their lives, at what had brought them to this rock midday, free from the responsibilities that regulated her own hours: children and meals and cleaning and ironing. She had been like them once, only a few years ago, and for a moment she paused as if watching grainy silent footage of herself.

“Hi,” one of the men called, and Nat came to her senses and said hello. Now that she was this close to them she felt a little self-conscious, and she said, “The water just looks so alluring.” As soon as she said “alluring” she regretted its dark, slightly affected tone and wished she had used a more regular word instead.

“It’s wonderful,” said a woman, plucking at the tight-fitting skirt of her red swimsuit. She looked up at Nat, cocking an eyebrow. “But you’re going in like that?”

“I guess so,” Nat said, smiling. She stepped to the edge and curled her toes. Her dress hung around her knees. This was no wild ocean but a placid, glass-smooth lake, and the water below her was clear and blue. She pointed her arms, felt the tendons behind her knees hollow and tense, her back stretch long to the tips of her fingers, and dived.

She fell through three long heart-throat seconds—one-a-thousand, two-a-thousand, three-a-thousand—before piercing the water. She could feel that it wasn’t a perfect entry, feet tipped a little too far back over her head, but she didn’t care. The sheer, pure cold sucked the air from her body and she surfaced, stifling a scream. Then she burst into laughter, paddling back toward her family. She hadn’t done something like that in years. How could anyone not love this sensation? It slapped you in the face and shouted You’re alive!

“Nice!” a man called above her.

Her toes reached sand and she waded toward shore. As she caught sight of Paul and the girls waiting for her, however, the excitement began to dwindle. She suddenly felt silly. Her dress suctioned squishily around her; she was forced to take small, awkward steps. By the time she got back to them Paul was fuming, her shoes clenched in his hands.

She squeezed out her hair, avoiding his eyes. “For fun,” she said, her voice small.

Paul shook his head. “You didn’t know what was under the water there. What if you dove down and hit something and never came up, right here in front of your little girls?”

“I knew it would be fine,” she said. And while she’d never admit it to Paul, the relief of not striking anything—that moment of plunging into the water and feeling herself go down, down, unimpeded, the cold exploding past her face and neck and body until her own air pulled her up again— was part of the fun. It had to be a little scary to count for anything.

She remembered that swimming was a different thing for him than it was for her; he’d grown up poor and never learned to swim until he got to boot camp, practicing every night, he’d said, in a pond near Fort Dix. This was one of the few concrete details she had of his youth, and it was a curious, poignant image: thin teenage Paul easing himself into the shallow dark, thrashing quietly along the shoreline until he could glide two strokes alone, three, four. Even then he passed the entrance test by the skin of his teeth, just enough to fill a pair of boots destined for Korea. It was no wonder, really, that the mild risks Nat liked to take scared him: the long swims to clear her head, cliff jumping, diving. But he acted as if she were doing it just to spite him, when in fact it had nothing to do with him at all. Which maybe, from his perspective, was even worse.

What if you never came up? She always came up.

He scooped their daughters into each arm and strode ahead, and she followed, feeling contrite, wishing she hadn’t been so defiant and so stupid. And yet she knew it wasn’t just worry on his part: Having an audience had made it worse. He’d had to sit by and watch strangers cheer her on for something he’d not wanted her to do, as if their approval was more important than his concern.

When she got back to the car he didn’t speak to her. Her dry shoes waited on her seat, side by side.

From THE LONGEST NIGHT. Used with permission of Random House. Copyright © 2015 by Andria Williams.

How the Yugoslav Wars Shaped a Generation of Writers 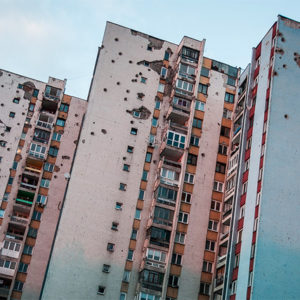 How the Yugoslav Wars Shaped a Generation of Writers “What was happening in Croatia and more generally throughout Yugoslavia was discussed at the university, often in connection...
© LitHub
Back to top