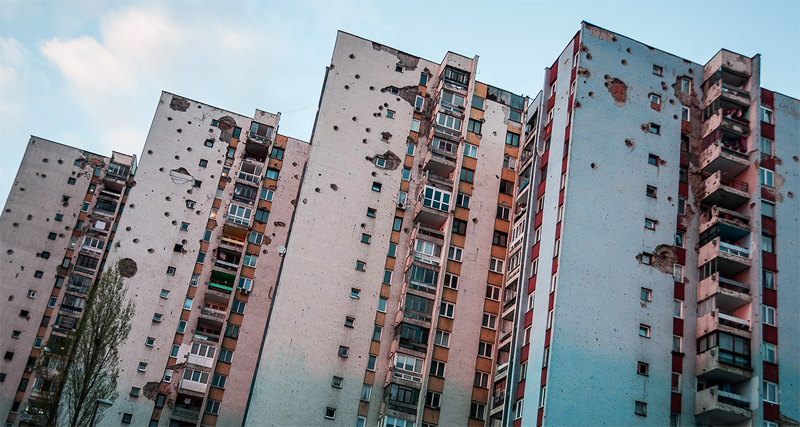 How the Yugoslav Wars Shaped a Generation of Writers

Lidija Dimkovska on the Other Lost Generation

“What was happening in Croatia and more generally throughout Yugoslavia was discussed at the university, often in connection with soldiers from the Yugoslav National Army—many of whom were deserting and returning to Macedonia. We all followed the mothers who set out by bus to search for their sons across Yugoslavia, and who burst into the as­sembly shouting, through tears and rage, ‘Bring our children home!’ New students turned up at the university who seemed older than the rest, with deep bags under their eyes and hol­low faces, confused and frightened, or rude and impudent, or drunk; tears ran down some of their faces during lectures, and it was clear where they had come from. While we were all dy­ing to know, no one was brave enough to ask if they had killed someone, if they had been ordered to kill someone, if they had been imprisoned, if they had been tortured, if they had tor­tured someone else. Once, one of them said, ‘Fuck it all. How did I end up in the wrong place at the wrong time?’ And it was true for all of them—a lost generation that found itself in the wrong place at the wrong time.”

–from A Spare Life

Some years before Yugoslavia split apart in the wars of the 1990s depicted in my novel A Spare Life (tr. Christina E. Kramer), we still believed that everywhere throughout that land was our place in the world. There was even a school trip that proved it called the “trip through Yugoslavia.” In both primary school and secondary school, almost every class in Yugoslavia organized a trip through the country: it consisted of seven to ten days of traveling by bus to the country’s most important historical and tourist destinations, “from the Vardar river to the Triglav mountain” as the Yugoslav national anthem had it.

On my trip through Yugoslavia as a 13-year-old schoolgirl, I first visited Dubrovnik, the most beautiful town in what is now the former Yugoslavia, as well as the marvelous Plitivice lakes, the house where Tito was born in Kumrovec, and the former Jasenovac concentration camp from the Second World War (which was established by the governing Ustaše regime, not by Nazi Germany). We also visited the monument to the killed schoolchildren that the Serbian poet Desanka Maksimović immortalized in the poem “Bloody Tale,” which we all learned to recite by heart in school. My class also saw a Serbian monastery with tombs of kings and monks, magnificent Belgrade with its long avenues, the vivid cafés of Sarajevo, and so many other places. The motto of all these trips through Yugoslavia was: “Get to know your country, to love it more.”

In 1991 the nationalistic, absurd, and unbelievable beginning of the Yugoslav war erased this motto from the heart of my generation. The young men my age were the last to serve in the Yugoslav National Army, willingly or unwillingly fighting for the Serbian nationalistic agenda. Those who deserted from the Yugoslav National Army enrolled in the national armies of each post-Yugoslav republic or nation. All of them, willingly or not, participated in the separation of Yugoslavia. Brothers, neighbors, and friends fought against each other, many of them dying or disappearing.

Today my generation is in its forties, and we still feel the consequences of everything that happened in Yugoslav wars. For instance, I remember that in Skopje, the capital of my country, Macedonia, there was once a presentation of a poetry book by a young poet who was, at that exact moment, serving in the Yugoslav Army. On TV we saw that the Croatian army had caught his unit, and that he and his fellow troops didn’t have any food, any water. When the poet returned to Macedonia from the war, he became a monk. Another who came back from the Yugoslav battlefields went on to become a great poet.

So A Spare Life, with its story of conjoined twins who must become separated, is dedicated primarily to this lost generation that was caught up in the historical and political trauma around it. We used to live in peace, only learning about wars in school; we never imagined we would be witnesses to a war during our lifetime. But then the wars in Yugoslavia stole our hopes and dreams from us. We were used to living in the old world, but suddenly we were forced to figure out how to manage in this new one: this postwar, post-separation world in which many fragile states went on to make numerous mistakes, creating an enormous number of victims. Now my generation explains to its children how after the Second World War there was another war (a war that today is still very seldom taught in schools, and then from a nationalistic point of view). The tragedy of the Yugoslav separation was not in the separation as such but in the brutal way it happened.

These traumatic events that occurred right before our eyes have deeply influenced our art, especially post-Yugoslavian writing. At the time war broke out, my peers and I were still at the beginning of our careers, and so we have been indelibly marked by what we witnessed. When I first visited Sarajevo after the violence ended, I bought the newest anthology of Bosnian short stories, and almost every piece in it was connected to the war. Writers throughout the former Yugoslavia have tried to come to terms with why it happened, and precisely what went on. These would include: Biljana Srbljanović, Goce Smilevski, Nikola Madžirov, Andrej Nikolaidis, Faruk Šehić, Ognjen Spahić, Uglješa Šajtinac, Tanja Stupar Trifunović, Ana Ristović, Vladimir Kecmanović, Tatjana Gromača, Saša Ilić, Taja Kramberger, Aleš Šteger, Primož Čučnik, Ivana Sajko, Tanja Mravak, Igor Štiks, Muharem Bazdulj, Tanja Stupar Trifunović, Jeton Neziraj, Pavle Goranović, Dragana Mladenović, Aleksandar Bećanović, Senadin Musabegović, Igor Isakovski, Dorta Jagić, Goran Vojnović—to list only some of the many important writers born in 1970s.

Of course, not all of us have written directly about war: the works of my generation are varied. Some are about historical events, but many are simply about the experience of being dislocated, or dedicating to exploring the questions of nation, nationalism, freedom, identity . . . Still others reach for universal political themes, or try to explore ourselves as victims of the system. Many of us have used humor to combat these traumatic events.

The Croatian writer Zoran Pilic recently remarked that, “a lot of my friends since the 1990s have left the country; today they are on every continent. This is the generation that was old enough to remember the former country, a lost generation of victims and nomads in Europe trying to find a place for themselves.” Everywhere I travel I meet these exiles. They work all kinds of jobs; they try to support their families. I also often meet writers from my generation at literary events all around the world. These meetings are wonderful and full of emotion. After the reading we always go for a drink together. The connection between us is maybe not as strong as it was between the older writers, but it is real. We translate each other into our national languages. Literary projects like the literary magazine Sarajevo Notebooks, where all of us publish our works in Bosnian, Serbian, Croatian, and Montenegrin, try to consolidate the connections between us.

Nowadays, things are much easier, even friendly. That was not the case in 1995, when I was invited to Strasbourg alongside many other young Yugoslavian intellectuals, all of us born in 1970s. We were fragile and embarrassed, and we felt guilty for a war we hadn’t wanted. The Bosnians didn’t want to speak with us at all. They were so angry and sad that I felt guilty to be from Macedonia, which was then the so-called oasis of peace. One day one of them said to me, “Imagine that you’re a student, and your student card is burned in the National Library in Sarajevo, alongside all of our national documents and all of our books—your personal and national identity has been taken away. You are nobody and nothing, and around you people are dying.” She was right. We tried to understand each other—we even sang together a very popular song by the Balkan rock band Azra, which we all loved:

One day I’m gonna never come home
All the friends I know I don’t recognize anymore.
As if I never was in this world,
As if her body didn’t want me.

My song’s keeping still, and it’d go crazy,
Pretty, modern girls don’t go for cool haircuts.
I shave my beard and mustache to look like Pankrti,
If I had a Fender, you’d see some playin’.

Balkans, Balkans, oh my Balkans,
Be tremendous and stay good for me!

We are only gypsies, damned by destiny,
Always someone comes to threaten us.
And the bands aren’t like they used to be,
My amateur one is starting to rock.

Balkans, Balkans, oh my Balkans,
Be tremendous and stay good for me!

Many times, the professors at the university of Strasbourg, which hosted us, exclaimed, “You love each other!” They tried to create a dialogue between us, so that they could understand what exactly happened and why. But we couldn’t help them—we were all too stressed by what was then happening in Yugoslavia, and anyway we didn’t understand it either. Yes, I am sure that we loved each other, but deep down I could not shake a feeling of guilt for the war, even if none of us was guilty of anything.

If something good has come from these terrible events, it’s that the Yugoslav War and these political crises have provoked an interest in the literature of my region. We are in a way masochistic: in reading literature, and in enjoying art in general, people love tragedy, sadness, conflicts, exile, refugees, etc. And all of these are present in the writers of my lost generation. It is an irony that the tragedies that informed these works have led to them getting translated into many languages and invited to festivals around the world. They had just as much talent before the war and used it quite well, but the war brought to them readers, audiences, and a space in European literature. And most of them are still writing about it.

Lidija Dimkovska is the recipient of numerous awards, including the 2013 European Union Prize for Literature for A Spare Life. She is also the author of the poetry collection pH Neutral History (Copper Canyon Press, 2012), which was a finalist for the 2013 Best Translated Book Award, and Do Not Awaken Them With Hammers (Ugly Duckling Presse, 2006). She lives in Ljubljana, Slovenia. 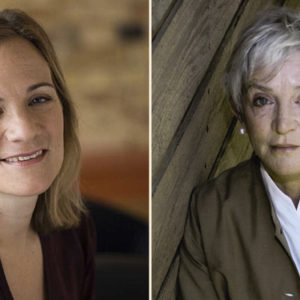 Tracy Chevalier is the author of eight historical novels, including the international bestseller Girl With a Pearl Earring. Paulette...
© LitHub
Back to top