If They're Coming, You Might As Well Be Prepared...

Most “there are two kinds of people” arguments can come off as overly facile or fundamentally flawed. That said, on the question of clowns, two camps really do seem to be in existence: those who find them relatively inoffensive, and those who are utterly terrified by them. Recently, the United States has seen an uptick in the number of clowns lurking around the woods at night and generally being creepy as all hell. You don’t necessarily need to be in the “clowns are terrifying” camp to find this behavior decidedly unsettling. Clowns can appear in many scenarios; beckoning ominously to passers-by and attempting to lure children into the woods is not a context in which anyone dressed in any fashion is going to come off well. Throw in facepaint, goofy hats, and the prospect of balloon animals, and things become even more frightening.

Sinister clowns and clown-like figures recur in pop culture, from Batman’s arch-nemesis The Joker to The Simpsons’ recurring villain Sideshow Bob to John Carroll Lynch’s character on American Horror Story: Freak Show to Violator, the demonic antagonist of Todd McFarlane’s comic book Spawn. As for my own position on clowns, I’m firmly in the “unafraid” camp, with a few caveats. As a child, my anxieties went elsewhere: specifically, balloons. The sound of a balloon popping terrified me, and sitting in close proximity to balloons until the age of around 11 left me with more than a little alarm—so I know a thing or two about seemingly fun things prompting irrational terror. A clown might not have scared the younger version of me, but a clown bearing balloons would have been another story entirely. 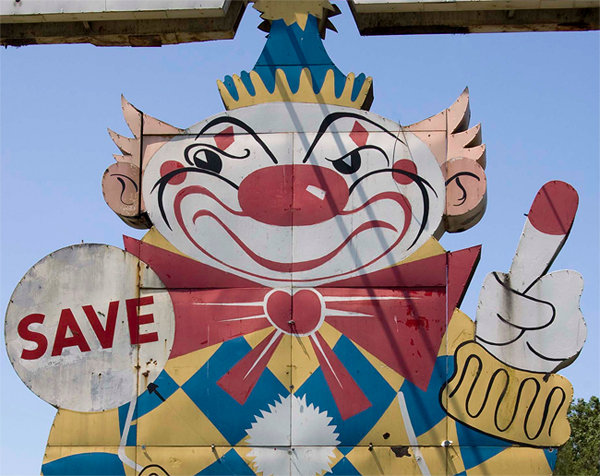 The “Evil Clown of Middletown”

This isn’t to say that my younger years were devoid of ominous clowns, however—far from it. I watched the television miniseries adaptation of Stephen King’s IT when it first aired, and it creeped me out to no end. I grew up a 15-minute drive away from a giant clown-themed billboard outside a liquor store in Middletown, New Jersey which has its own Wikipedia page, and which was, due to its scale and the grim expression on its face, an upsetting thing for any young child to see. Then, the summer before I turned 21, I worked on the crew of a Kevin Smith-produced, Bryan Johnson-directed independent film called Vulgar, about a party clown who gets caught up in a nightmarish scenario involving torture and blackmail.

But beyond my own personal history, there are plenty of sinister clowns to be found in the pages of novels and short stories. To an extent, this can be seen as a kind of subdivision of the larger category of creepy carnivals and circuses in fiction. Ray Bradbury’s Something Wicked This Way Comes, for instance, shows the metaphysical horrors below the surface of a seemingly whimsical carnival in the Midwest. Katherine Dunn’s Geek Love reveals the complex familial and personal dynamics lurking beneath the surface of a carnival freak show. And William Lindsay Gresham’s Nightmare Alley, which follows the rise and fall of a con man enmeshed in hoaxing people under the guise of spiritualism, also uses a carnival as one of its settings. In the novel’s first scene, the protagonist observes one character, having fallen on hard times, taking a job as a geek, which involves drinking the blood of a chicken. It’s a moment that sets the tone for the story to follow, even as it also shows the sordid and sinister machinations beyond something generally considered to be light entertainment.

It isn’t too far from any of these places to the world of sinister clowns; in each case, the carnivalesque goes horribly awry, leaving fear and horror in its wake. Some writers have veered into crime fiction for their tales of clowns gone bad: Jim Ruland has written a chapbook titled Clown Detective, about a pair of, well, clown detectives. And Carson Mellick III’s ClownFellas: Tales of the Bozo Family collects a group of novellas set in a world in which organized crime is run by syndicates of clowns. Along the way, Mellick riffs on coulrophobia and features a character known as Don Bozo. And if you accept Kathleen Rooney’s argument that Jack Handy’s “Deep Thoughts” was a major influence on a generation of writers, it isn’t much of a stretch to argue that Handy’s own contribution to the creepy clown canon is arguably one of the most well-remembered short stories of recent decades.

Of the more horrific takes on clowns in contemporary fiction, Stephen King’s It is the grand champion, the ur-text from which hundreds of rubber-nose-wearing ships have sailed. (Pennywise was also as the inspiration for the long-running pop-punk band of the same name.) All of this, of course, means that King has also weighed in on the current evil-clown epidemic. The title character is, technically speaking, not an actual clown gone bad, but a form assumed by a extra-dimensional creature that preys on children in a small town in Maine. Still, though: scary clown with a demonic form? As with much of King’s horror, there’s plenty of terrifying imagery to be had.

The apex of clowns-as-nightmare fuel in literature may well have come from the pen of Thomas Ligotti. This is not terribly shocking, given that Ligotti could write about an adorable child riding a pony on a sunny day and turn it into the stuff that chills readers’ souls and convinces them that they live in a bleak, arbitrary universe. Among the stories in his collection Grimscribe is “The Last Feat of Harlequin,” about an academic whose work involves articles with titles like “The Clown Figure in American Media.” He ventures to the town of Mirocaw, which hosts an annual festival in which clowns play a prominent role. Our narrator habitually attends such events, and regularly takes part. “To me the title of Clown has always carried connotations of a noble sort,” he writes. Throw in the involvement of an old mentor and you have the beginnings of a compelling narrative.

It’s also a narrative that, by the story’s end, curdles into something utterly terrifying. The narrator arrives in Miroclaw and discovers anonymous townspeople dressed as clowns and battered by their neighbors according to some mysterious custom. “They’re the freaks,” one of the locals tells him. “It’s their turn this year. Everyone takes their turn. Next year it might be mine. Or yours.” By the time the story reaches its climax—in a clown-filled subterranean chamber, where a terrifying ritual takes place—even readers without a pre-existing aversion to clowns may well find themselves recoiling from one the next time they see them.

Ligotti’s story taps into the kind of formalized and codified behavior associated with clowns, and then uses that to unearth something much deeper and more sinister. It’s one of the most effective horror stories in a book of effective horror stories, and it seems no coincidence that the cover of the recent Penguin Classics edition of Ligotti’s Songs of a Dead Dreamer and Grimscribe features a sinister riff on the harlequin whose imagery pervades the story.

What makes the sinister clown so compelling? For one thing, it takes advantage of our innate fear of betrayal. Clowns, as an institution, are supposed to be fun—agents of merriment and entertainment, not bearers of fear and irrational terror. And yet, we live in a world where familiar institutions let us down all the time. The creepy clown, then, may be another manifestation of this, its smile hiding awful intentions, its bright colors a distraction to keep you from noticing that something awful is about to arrive. 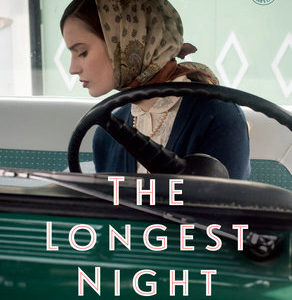 June 1959 Nat was the first one out of the car. She stepped into the dirt parking lot, her low-heeled shoes printing chevrons...
© LitHub
Back to top
Loading Comments...