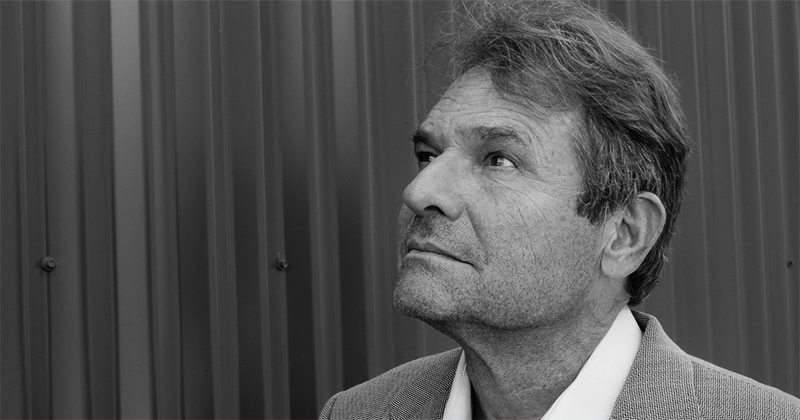 He didn’t seem particularly cool or mysterious. It was easy enough to imagine him doing any old thing: Buying a new cardigan at the mall or grimacing as his dentist tapped an X-ray that showed old mercury cavities in need of porcelain replacements. He embodied the grown-up version of the friendly, polite guy from your high school who was a bit too short to make the basketball team, and his name was reminiscent of shortbread and farmhouses—the bland cadence of it hardly worthy of a person who had written such sublime poems and short stories and novels. Yet Denis Johnson had both a gentle manner and a fiercely charismatic presence. He was a guest writer at the Iowa Writers Workshop in 1993; there he sat, once upon time, around a faux-walnut oblong table with a dozen or so dazzled, striving writers.

I took his lecture class, which was loosely based on Malcolm Lowry’s Under the Volcano: He seemed personally hurt rather than confounded that nobody shared his love for the book. I read each chapter carefully, crafting pithy and ever so wry commentary which I hoped to toss out, as if ad-libbing, during class discussions. But I also thought that speaking up in class would reveal the depths of my stupidity to my ivy-league peers, and I couldn’t imagine talking with a professor outside of class. This was a problem, because I wanted to share a fun fact with Denis Johnson: I had just published a short story, my first, in a literary magazine featuring an interview with him titled, “A conversation with Denis Johnson,” which also happened to be a personal goal.

During the class breaks we smoked outside. Pretty much everyone smoked; we shared the communal, fleeting sweetness of nicotine raising our dopamine levels. But Denis Johnson would try to stop smoking as the weeks passed. I don’t know if he ever succeeded. Kicking smoking was harder than kicking heroin, he told us, tears in his eyes. We looked around the room, trying to focus on some set point other than our teacher at the head of the table as he pressed his palms to his face.

In a few years I would try to stop smoking because I wanted to get pregnant. I would remember his words as the nicotine-free hours inched along, as I mourned the old world: Never again would I sit on the front porch and smoke as I watched the sun go down, no more painting my nails with an ashtray next to all the little bottles of bright varnish, goodbye to whisky sours and Marlboro Lights in the mahogany booth of my favorite bar, to squinting down at a jukebox in the darkness with a cigarette dangling from my fingers. And the biggest loss of all: How could I even live without the relief of fumbling for a lighter during a moment of anxiety, without that magic first inhale tamping it down?

The sentence: It’s harder than kicking heroin became my comfort, my mantra. And whenever I caved to craving or scolded myself for self-aggrandizing agony induced by my new life sans Marlboro Lights, I would think of Denis Johnson in a classroom in Iowa City, in his blue shirt with the sleeves rolled up, crying.

It was one such smoke break in early February, the valentine heart of a gray Iowa winter, when I noticed there was no one talking to Denis Johnson. Usually students clustered around him, but he was enjoying a rare minute of peace, smoking and drinking his coffee as he gazed out at the parking lot. I gave myself a mental pep talk—You can do it—bolted down my own coffee, and strode purposefully over to Denis Johnson. With my heart pounding, I proceeded to gush about this terrific interview I’d just read! He seemed only slightly wary to have his space invaded and regarded me with his standard bemusement and kindness. I dearly wanted to add, as if a breezy afterthought: Hmm . . . I think I’ve got a piece in that issue, too. I was genuinely fascinated by the religious motivations of his characters and wanted him to expound upon his own religious inspiration. Mostly, though, I wanted him to say that he had read my story and that it was really, really good.

Over Denis Johnson’s shoulder I saw the look of puzzled merriment on my friends’ faces, for my peers might have voted me Least Likely to Corner a Visiting Writer; certainly I would have cast a vote for myself in the category Least Likely To Do Anything At All. I understood that my admittance to the Workshop was probably an error, but my imposter syndrome was also laced with smugness: Guess who partied a bit too heartily at the University of Kansas and was put on academic probation twice, yet is here nonetheless? But Denis Johnson didn’t zero in on the class stars, or engage in the clubby atmosphere of the Workshop. He treated everyone with the egalitarian politeness he showed me that Iowa afternoon, even when I said I liked the part of the interview where he talked about how his characters had to (my words here—of course!—not his) grapple with God.

It sounded like a title of a bad poem in overly elegant font. And the word grapple suddenly seemed the root cause of everything that was wrong in the whole world; at the very least it was a word better read than said. O, Grapple! Wasn’t a grapple a hybrid apple that tasted like grapes? Hadn’t I just sampled grapple slices in a little wax cup at Hy-Vee? Well, of course this was the word I would choose to showcase my nuanced intelligence, etc. Yet Denis Johnson kept nodding along, giving the non-committal half smile and eyes-to-the-side gaze of any nice Midwesterner.

“Whenever I scolded myself for self-aggrandizing agony induced by my new life sans Marlboro Lights, I would think of Denis Johnson in a classroom in Iowa City, in his blue shirt with the sleeves rolled up, crying.”

The only time I saw his reserved cheer falter was when he talked about receiving bad book reviews: With so many great books in the world, only a fraction of which you’d ever get to read, why waste time with a book you don’t like, a book, he argued, that perhaps just isn’t the book for you? Because a bad review messes with you when you sit down to write. “If any of you ever give me a bad review,” he said,” I will come and find you.”

It’s not possible to overstate how far this macho posturing strayed from his general composure. I certainly found it distasteful, for I had the magnanimous view specific to a writer that has yet to publish a book: A book belongs to the world, not the writer, who should be grateful for all readers! You must release your manuscript from your calloused hands like a treasured pet bird and watch it soar up, up, and away!

I have a revised opinion after reading the Goodreads reviews of my last book: “It was literally painful to read this book. I was planning on hate-reading this one because it was just so bad. The characters fell flat and the story ended with a burp, not a bang. Sad face.”

Still, it felt oddly comforting to think of Denis Johnson—Denis Johnson!—having the sad, sick feeling of reading a bad review; that he knew something about how harsh words, even stupid and mockable harsh words, got stuck in your head and played on a loop, crushing your confidence. Really, though, how was it possible for Denis Johnson to even receive a bad review? He was called a writer’s writer, but there was nothing walled-off about him in person, and Denis Johnson’s gift remains right there on the page for anyone with a library card.

When he died last year, I remembered a hot autumn afternoon watching my son’s soccer game from my parked car so as not to risk an out-of-bounds ball striking my new baby’s tender, pulsing head. Because I was cradling my baby and focusing on the soccer field—was it the nice coach or the douchey coach talking to my son on the sideline?—I didn’t notice when the big Kansas sky turned from its standard overcast gray to swirling acid-emerald green, but there it was: Denis Johnson’s sky.

I breathed in the smell of my new baby and remembered a different me, temping at a law firm in midtown Manhattan, the sun cutting through the slatted window shades and striping my hands with light as I read Jesus’ Son. I remembered my joy as I read about “miraculous balls of hail popping a green translucence in the yards.” I recalled the next lines not as precisely—some loveliness about a couple walking through town after the storm, hail stones up to their ankles—before an indelible line of summary: “Birth should have been like that.”

I had a raw Caesarean scar and could not disagree. I was still amped up by a difficult pregnancy, both wildly ecstatic this beautiful baby, our youngest daughter, had made it into the world, and newly terrified by life in general. But there in my humid car right before the hail came, right before my son ran to the car screaming and laughing, I was given a sort of reassurance, transcendent and otherworldly, that the green translucence of the world wasn’t a trick of the light.

How did he do it? I wonder, still, how his gorgeous, clean sentences voiced the unsayable, the mysterious. In his interview Denis Johnson had said: All books spring from the same impulse that the Bible was written from. There’s a tendency to elaborate, to add on to that particular novel.

But with Denis Johnson standing in front of me, I chose a non-Biblical religious experience to discuss: the part of the interview explaining how he’d spent an absurd amount of time with a cereal box one morning after he’d taken LSD, and that it was time well spent.

Denis Johnson blanched. “God, what I said about the cereal box makes me sound crazy.” He stubbed out his cigarette. I said that it most certainly did not make him sound crazy, my voice and my anxiety rising, because it was now or never for the big reveal: “The smoking gun that is my unrecognized genius appears in short story form just 54 pages from your interview!” But in the pale winter sunlight of that Iowa afternoon I experienced a tardy epiphany: there was just no way to drop in that conversational gemstone without sounding pathetic. In fact there was not a thing to do in that moment other than to keep telling Denis Johnson—who didn’t need my consolations—that his thoughts on time management and cereal boxes were super interesting! Super great!

And then it was time for for the second half of class. The break was over. Denis Johnson in his temporary corporeal form—his bones and blood and brain and big heart—turned and headed toward the door. But then he looked back and raised his coffee cup to me, an inch or two of kindness as memorable as any sideshow levitation, and said thank you. 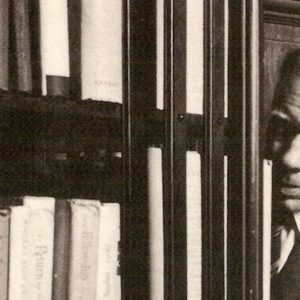 The thing that makes the work of Susan Sontag—who would have been 85 years old today—so enduring is not just her wisdom,...
© LitHub
Back to top