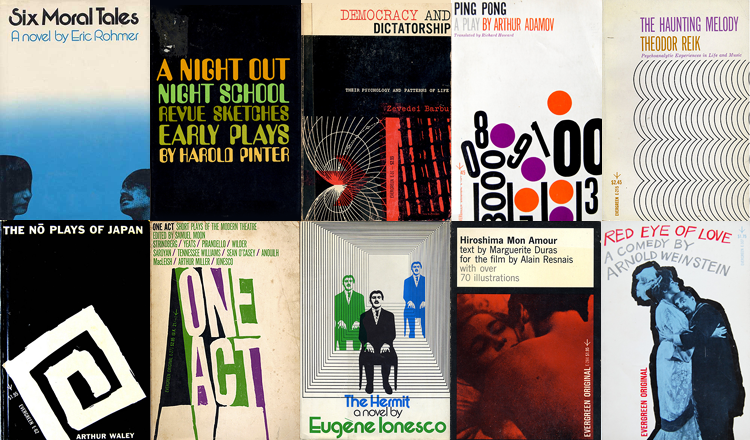 On the Revolutionary Book Covers of Roy Kuhlman

Between 1951, when Barney Rosset purchased it for $3000, and 1970, Grove Press became a veritable communications center for the counterculture, defined in many ways by the visual sensibility of legendary cover designer Roy Kuhlman. Rosset shared Kuhlman’s aesthetic taste—which had been formed by Abstract Expressionist pioneers of the post-war era—and their loose collaboration would provide Grove with an instantly identifiable, internationally renowned avant-garde look.

Kuhlman didn’t read the books whose covers he designed. Rather, working from a brief description, he would subordinate textual content to experimental form, creating a consistent graphic language integrating Grove’s title list with a single style and providing a visual context for the colophon, which frequently constituted an element of the design.

In 1958, Grove began publishing original avant-garde texts as inexpensive “quality” (now commonly known as “trade”) paperbacks. Typically larger and better made than mass-market paperback reprints, quality paperbacks were quickly recognized in the industry as marking a new and significant stage in the paperback revolution.

One of the first authors to benefit from this line would be Samuel Beckett. Virtually unknown in the early fifties, he would be Rosset’s most important acquisition for Grove Press. The eighteenth title in Grove’s Evergreen Series, Beckett’s Molloy is hailed on the back cover by Kenneth Rexroth as “a major modern classic.” Kuhlman’s cover design encourages the analogies to abstract painting that were common in critical appraisals of Beckett’s difficult post-war trilogy.

Over the course of the fifties and sixties, Grove published and distributed numerous translations and studies of Asian literature and culture, including studies of Zen Buddhism, both by Japanese scholars such as D.T. Suzuki and by American popularizers such as Alan Watts. Kuhlman’s designs were particularly appropriate to this most “abstract” of spiritual disciplines.

Grove also contributed to the Latin-American Boom, publishing translations of Borges, Vargas Llosa, and Pablo Neruda, who was a hero of Barney Rosset’s. Kuhlman’s cover hovers at the threshold between abstraction and figural reference, allowing him to gesture toward cultural specificity without sacrificing his signature style.

Grove had a hand in the post-war popularization of African literature as well, publishing the three texts for which Amos Tutuola remains most well-known—The Palm-Wine Drinkard, My Life in the Bush of Ghosts, and The Brave African Huntress—while also exerting considerable effort to get his stories published in American magazines.   Kuhlman’s cover attempts to capture the cultural syncretism of Tutuola’s stories, one of which is entitled “Television-Handed Ghostess.”

Grove published many groundbreaking studies of Jazz in the late fifties and early sixties, helping to elevate the music’s cultural status as an indigenous avant-garde, comparable in significance to the Abstract Expressionism that Kuhlman’s covers comment upon. This cover bears significant similarities to the implied “primitivism” of the covers Kuhlman designed for Tutuola’s books.

Rosset also established close relations with post-war American literature, especially the Beats. Grove would ultimately publish Jack Kerouac’s The Subterraneans, Dr. Sax, Satori in Paris, Lonesome Traveler, Pic, and Mexico City Blues, which, piggybacking on the monumental popularity of On the Road, helped to cement their association with the Beats and the San Francisco Renaissance, to which Kuhlman’s cover refers.

Written in 1938, but unavailable in English until Grove brought out this translation, Antonin Artaud’s The Theater and Its Double was a foundational theoretical statement informing the canon of post-war European drama in which Grove specialized.

Spurred by the play’s Broadway debut, when it was sold for one dollar in the lobby of the John Golden Theater, Waiting for Godot eventually sold more than two million copies, becoming an iconic American paperback and one of the bestselling plays of all time. The cover photo, which Beckett thought “marvelous,” is from a German production.

Endgame was the first of Beckett’s plays to be published under the Evergreen Original imprint.   Grove promoted it as “the play the critics didn’t understand,” encouraging audiences to “read it before you see it.” The cover photo is from Roger Blin’s Paris production of the play.

More than any other play Grove published, The Blacks was inextricably yoked to a specific American performance at the St. Mark’s Playhouse in Manhattan, photos from which were generously distributed throughout this paperback reissue. The original New York cast featured James Earl Jones, Louis Gosset, Roscoe Lee Browne [pictured] Cicely Tyson, and Maya Angelou. This cover also anticipates how Kuhlman and Grove would play with colored fonts to trope on race relations.

As critic W.B. Worthen affirms, “in the first decade of Pinter’s real celebrity, the material idiosyncrasies of Pinter’s printed text drove the understanding of Pinter’s dramatic writing,” and no idiosyncrasy was more prominent than Pinter’s famous pauses which, as Worthen further elaborates, tend to assimilate the plays into a temporality associated with “certain kinds of reading.” Indeed, Grove tended to publish drama that needed to be read as well as seen.

Grove also innovated the genre of the film book, producing a number of lavishly illustrated and annotated paperback screenplays for landmark films. While these books were not terribly profitable—they were expensive to produce and difficult to market—they were popular on university campuses, anticipating in a variety of ways the modes of reception and analysis that would establish these films as cornerstones of an emergent academic canon.

Translated by Richard Howard from the version published by Editions de Minuit, Last Year at Marienbad features more than 140 illustrations, using frame enlargements selected by film scholar Robert Hughes. Written by Alain Robbe-Grillet and directed by Alain Resnais, the film was almost instantly canonized as a classic of collaboration, encouraging critical comparisons between the French New Novel and the cinematic New Wave.

Written in English, Beckett’s first published novel Murphy had been brought out, to little acclaim, in 1938. Kuhlman’s cover for the Grove reissue provides an early example of his creative use of typography.

Hugh Kenner’s early study of Beckett was a foundational contribution to the “Beckett industry” that would quickly emerge to fill the void left by the author’s notorious reticence. Kuhlman’s cover reveals the degree to which Beckett’s name alone had become something to conjure with.

In promoting Ionesco’s 4 Plays, Grove used the same campaign as with Beckett’s work, arguing that the printed text provided the opportunity for readers to determine the play’s significance for themselves. Their ad in the Times read: “Are Eugene Ionesco’s plays ‘pretentious fakery’ or ‘amusing and provocative’? Make up your mind – read 4 Plays by Eugene Ionesco.”

According to Gil Sorrentino, who worked as an editor at Grove in the later sixties, Roy Kuhlman “invented the look of the modern dust jacket.” Grove dust jackets were particularly identifiable through their use of white “negative” space.

One of Kuhlman’s favorite painters was Franz Kline, whose influence can be clearly seen in this early cover for the writings of the Marquis de Sade. In the sixties, Grove would issue a three-volume unexpurgated English translation of Sade’s work.

Rosset originally read Henry Miller in college, and had been determined to publish the notorious Tropics after his success with Lady Chatterley’s Lover. Unlike with that text, Tropic of Cancer was suppressed and litigated in numerous venues across the country, while simultaneously enjoying many months on bestseller lists in those same venues. In order to avoid further aggravating the authorities, Grove eschewed illustration on the covers for both hardcover and paperback editions of all of Miller’s work in the sixties.

After William Burroughs’ wildly explicit Naked Lunch was exonerated of obscenity in 1966, Grove’s lawyer Charles Rembar declared the “end of obscenity” for the printed word in the United States. The designer of this iconic cover is unknown.

Grove frequently used photos of Jean Genet, a favorite of the Beats who was by the mid-sixties a counter-cultural icon, for the covers of his novels.

In 1961, Grove launched a new imprint, Black Cat (named after a night club in Frankfurt), calling it the “mass market line with the liveliest look in the field.” Red Star Over China was the eighth title in the series. The front matter for the Black Cat edition classifies the text as “one of the basic source books of modern Chinese history, as a satisfying and enlightening tale for the general reader, and even as a handbook of guerilla warfare during World War II for partisans in Europe and Southeast Asia.” Over the course of the sixties, Grove would develop this idea of a revolutionary “handbook” as one of its signature contributions to sixties activism.

The mainstream press took little notice when Grove brought out their hardcover edition of The Wretched of the Earth, with the New York Times restricting their coverage to a one-paragraph announcement headlined, “Handbook for Revolutionaries.”  The iconic Black Cat mass-market paperback, issued in 1968, would come to typify this quintessentially sixties genre.

The Autobiography of Malcolm X was originally to have been published by Doubleday. It was already in galleys when he was assassinated, but the subsequent threats and violence gave Doubleday cold feet. Rosset was quick to step in, issuing the hardcover in the fall of 1965 and the Black Cat paperback in the fall of 1966.

Issued as a Black Cat paperback in 1969, Look Out, Whitey! illustrates Grove’s creative use of typographic tropes in their design of revolutionary texts. A veteran Civil Rights activist, author Julius Lester would be associated editor of the Evergreen Review from 1969-1971.

By inverting the nigh-universal convention in publishing of black type on a white page, Black Is foregrounds the degree to which the opposition of black and white is implicated in the very design of the printed book.

Regis Debray’s Revolution in the Revolution? was written with the explicit purpose of providing guidance for insurgents across Latin America. The central conceptual and practical component of the book is the military “foco,” the small group of guerillas who, in their very composition, make up the seedbed of the revolution. Many at Grove perceived themselves in such terms.

The idea to publish an unexpurgated edition of Lady Chatterley’s Lover was originally suggested to Rosset by UC Berkeley Professor Mark Schorer, who would in turn be instrumental in defending, legitimizing, and publicizing the text. Energized by the Supreme Court’s landmark ruling in Roth v. US (1967), which defined obscenity as lacking any “redeeming social value,” Rosset and his lawyer Charles Rembar successfully leveraged the expert testimony of Malcolm Cowley and Alfred Kazin to prove that Lawrence’s notorious novel had literary merit.

While it was the hardcover that generated all the legal struggles, it would be this Black Cat version of Naked Lunch, which included transcripts from the Boston trial, that most Americans would read. Again the absence of illustration is noteworthy.

Billed on the back cover as a complete reissue of the underground London magazine originally published serially in 1879 and 1880, The Pearl was one of Grove’s bestselling examples of Victorian era pornography, selling over one million copies in the late sixties.

The proliferation of cheap Black Cat editions of Bertolt Brecht’s plays—pocket parables, as it were—alongside their frequent production by college and university drama departments illustrates the degree to which Grove, with drama critic Eric Bentley’s help, domesticated Brecht as a countercultural playwright in the sixties.

Loren Glass is Professor of English and the Center for the Book at the University of Iowa. His books include Authors Inc.: Literary Celebrity in the Modern United States, 1880-1980 and Counterculture Colophon: Grove Press, the Evergreen Review, and the Incorporation of the Avant-Garde.
http://www.sup.org/books/title/?id=22373 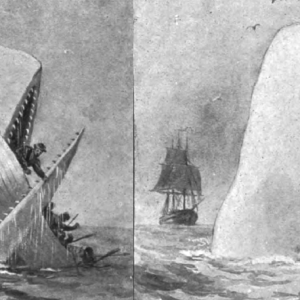