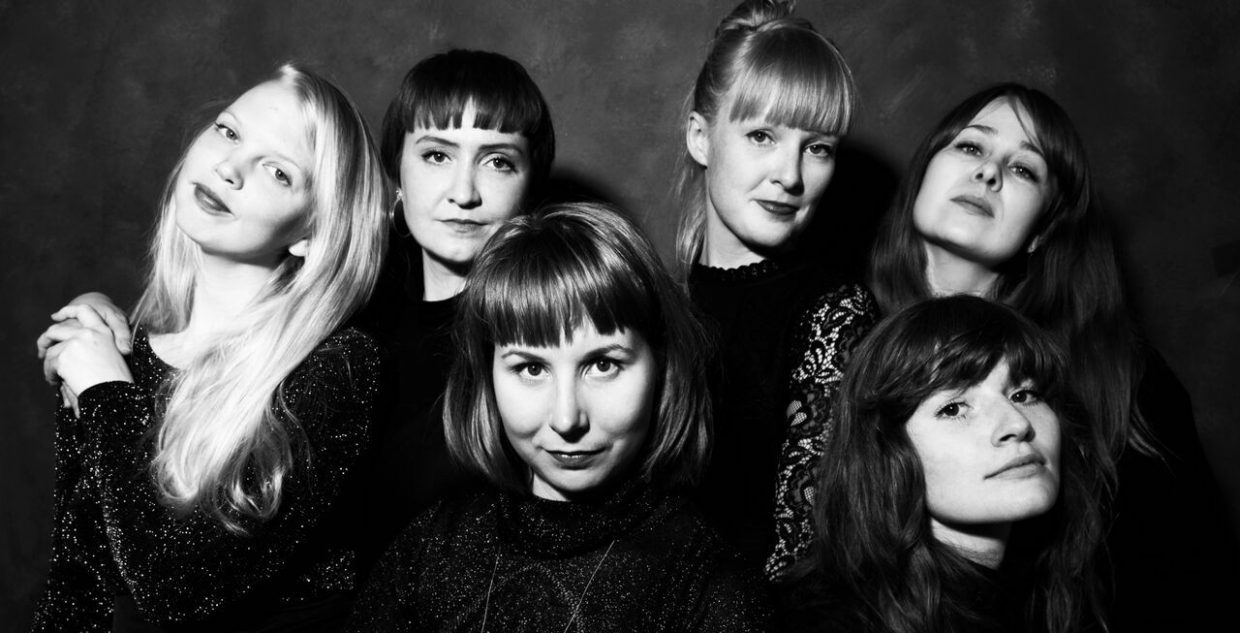 The Impostor Poets of Iceland Issue a Manifesto

"Critics still don’t entirely know what to do with us."

We’re on Flatey, a small island in an archipelago in West Iceland. These islands are clustered in Breiðafjörður, a fjord that Icelanders often talk about in metaphorical terms: “Their freckles were as countless as the islands in Breiðafjörður.” We write this in June, when the sun never forsakes the sky, and half of the island is closed off because it’s nesting season. There are birds everywhere.

There are six of us: Þórdís Helgadóttir, Þóra Hjörleifsdóttir, Sunna Dís Másdóttir, Ragnheiður Harpa Leifsdóttir, Melkorka Ólafsdóttir, and Fríða Ísberg. We’re here to write a book that will be published this fall. It will be our third book of poetry in three years.

In Iceland, there’s little if any hierarchy when it comes to bookstores. It’s nice if your book is released by a publishing house, but anyone can email the largest bookstore chain in the country and get their self-published book on the shelves. It’s one of the plus sides of living in a small society—you’re never very far removed from the tastemakers.

The Impostor Poets came into being in a summer cabin encircled by birch and stone. We’d gone there to write a book of poetry over the course of a single weekend. The challenge we set for ourselves was to eliminate our fixation with perfection, like breaking up a bad relationship, or quitting a draining job. All of us knew the Impostor well, that figure who perches on your shoulder and whispers, “This isn’t good enough.” We conceived of the trip as a springboard into the never-ending project of making our peace with the Impostor, as an impetus to write and publish.

The Impostor Poets are a movement; we invite the Impostor to the table, confront her, and encourage others to do the same.

The thing that brought us together was that we lacked the self-confidence to properly follow through with our writing.

When we work together, we have a set agenda. We start by checking in, sharing whatever baggage we’ve brought with us—what we’re thinking about, what is wearing on us. We might be concerned about issues of control, feeling conflicted about motherhood. Then we write, each in her own corner. Afterwards, we share our material while it’s still raw, unsanded, and we invite each other to borrow inspiration from one another. We lay ourselves bare in mutual trust and work collaboratively on our books. Following these working sessions, we develop the text amongst ourselves and with editors. We publish our books ourselves. Find talented women who we want to work with: editors, artists, and designers. We work fast, together.

We’re staying in an old, wood-frame house that used to be the village general store; the wooden floorboards are warped, worn smooth from all the wool socks that have buffed them over the years. One of us gets a splinter. Drawers from the old store, labeled with looping cursive script on slips of paper, cover one of the living room walls. There are books everywhere.

We don’t know if it’s specifically linked to gender, but the thing that brought us together in the first place was that we lacked the self-confidence to properly follow through with our writing. To publish without overthinking our manuscripts back into our desk drawers. The name we chose for ourselves, Svikaskáld, Impostor Poets, is a reference to impostor syndrome—the feeling that waits to sneak up on you, that other people will realize you have no idea what you’re doing.

In the beginning, our camaraderie was, more than anything else, a decided fuck you to this insecurity. We wanted to create a communal space in which we couldn’t give two shits about our uncertainties, in which we could allow ourselves to experiment, to make mistakes, to try new things. We present our poems as part of a larger, collective body of work and this anonymity provides us with a real opportunity for growth. 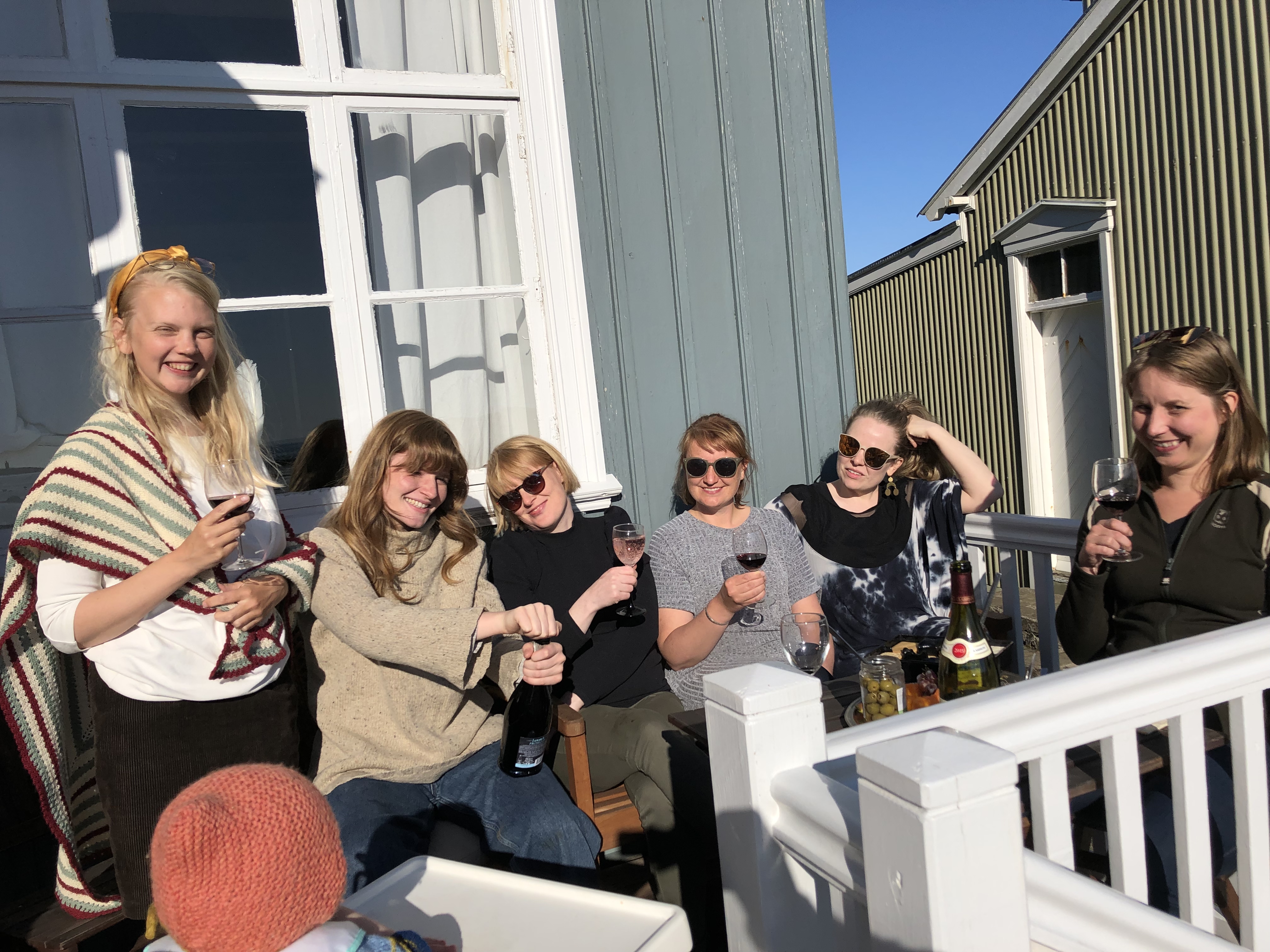 Since the formation of Svikaskáld, we’ve taken this approach in various directions and also interpreted the root word in our name, svik—meaning betrayal, fraud, treachery, trickery, deceit, imposture—in many different ways. Any time we encounter a convention or tendency in society or the literary world, we give ourselves permission to put a question mark next to how things have been done, next to whatever it is that people seem to expect. That’s when, perhaps, we decide to svíkjast: to renege, to shirk, to refuse this precedent, to do things differently. We reject the original image of the poet—the macho master, the lone wolf. We do this by exchanging ideas, by “stealing” from one another, presenting ourselves as a group, sharing recognition, and not worrying about contradicting ourselves or the expectations of others.

There is total trust within this group, although there’s an important distinction to be made between total trust and total fidelity. We all have the freedom to seek out other publishers, groups, or entities if we want to promote ourselves, but we can always depend on the fact that if there’s no interest in our work elsewhere, we can simply publish it ourselves. In an environment like this, you can’t really call anything perfect or imperfect, right or wrong. It’s just wide-open seas and more than enough space for creation and play.

Critics still don’t entirely know what to do with us. Our goals are artistic, not political.

Before we could publish our first book, we needed to un-learn much of what society has instilled in women and confront the way we’ve been socialized, both internally and externally. In 2017, every single one of Impostor Poets was convinced of the genius of the other women in the group but plagued with doubts about her own abilities. We were paralyzed by perfectionism; no piece of writing, be it small or large, was allowed to see the light of day before every possible criticism had been considered. This performance anxiety didn’t spring out of nothingness—there is an agonizing difference between the kind of treatment that young artists in Iceland receive according to their gender. If a young man comes out with a project of middling quality, people say he’s got potential, or, in the worst-case scenario, they just shrug and tolerate him.

But many fields have previously been completely intolerant towards female amateurs—they got less room to stretch their wings, were branded tedious and presumptuous if they put out work that was, in some way, thought to fall short. This harsh state of affairs is relaxing somewhat, but that’s only because with every passing year and decade, women are becoming more visible. And the more role models women have, the more diverse the scene becomes.

The house we’re staying in on Flatey is called Vorsalir, Spring Halls. Around midnight, white and bright, Arctic terns sweep through the sky. We watch them through the window, pour one another one more glass of wine, brew more coffee. 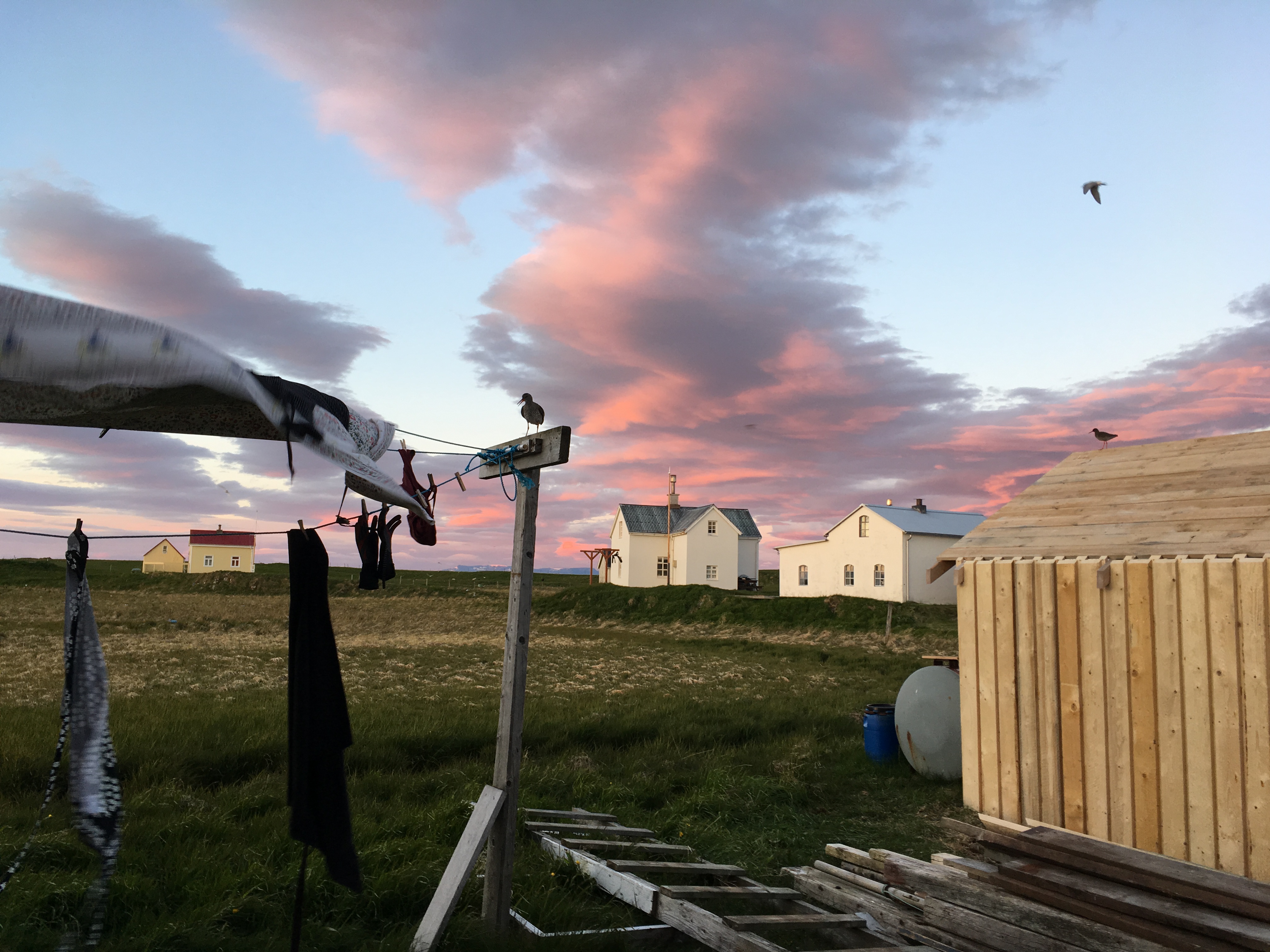 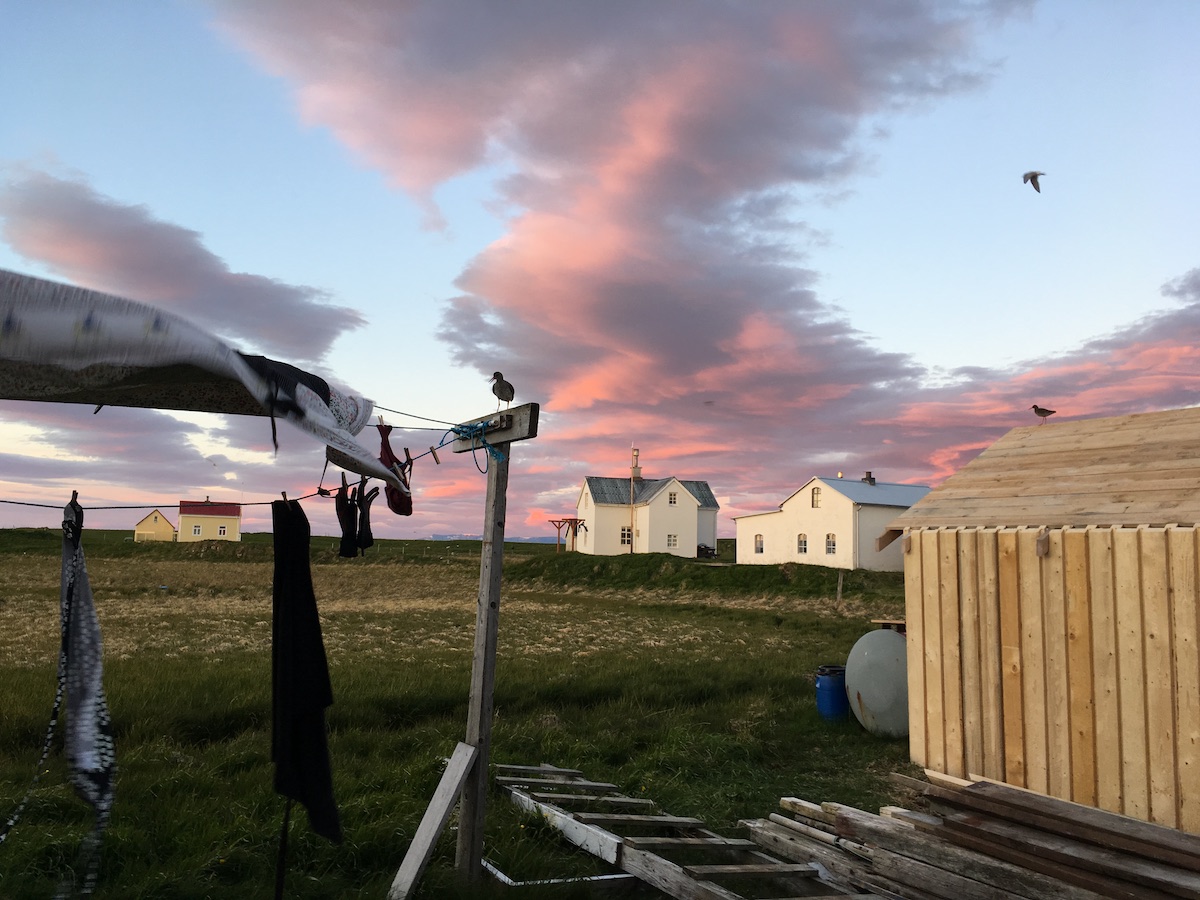 Being a woman poet is a balancing act. We like working together in a group, sharing our poetry with one another. We like conversation and know that a poem is always a conversation. At literary events or during interviews, women tend to be asked about other women authors, about their influences or subject matter, while men tend to be asked about their own work, are less required to answer for the work of other men and compare it with their own. Of course women have their own role models, of course they’re reading other women of the same age. But when men aren’t asked these questions, it perpetuates accepted ideas about male poets being geniuses up in the attic, while female poets are somehow more trivial, all members of the same mediocre book club.

Our books have been well-received; we’ve been lifted up, and have in turn, empowered others. But critics still don’t entirely know what to do with us. Only one review of our first book was published; it bore the title “A Trustworthy Manual for Men.” The review, which was complimentary, called our work “women’s lib poetry.” There’s a tendency for people to define us as a feminist poetry collective, but this is a definition we resist. We are all women and we are all feminists, a fact that can be read throughout our poetry. But we aren’t writing for the cause of women’s equality or liberation—our poetry is art; it’s not primarily intended to contribute to, or be a tool for the struggle, although it certainly can be used in that way, if you like. But our goals are artistic, not political.

The Impostor Poets aren’t hindered by ego—instead, we inflate and reinforce one another’s self-images. We are allies, we are colleagues, and we are always intent upon pulling our fellow women into the limelight with us, and more than willing to do so. Men have done the same thing for hundreds of years. We operate on the premise that there’s room for all of us within the literary scene, because there is always room for quality in the world, and although we as individuals sometimes forget that we are talented and clever, the collective never forgets. It remembers everything. And pushes onwards. 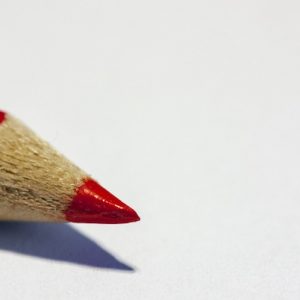 When our writing resists us—when it refuses to do as we hope—we often respond with ever more force, pushing it to bend...
© LitHub
Back to top
Loading Comments...