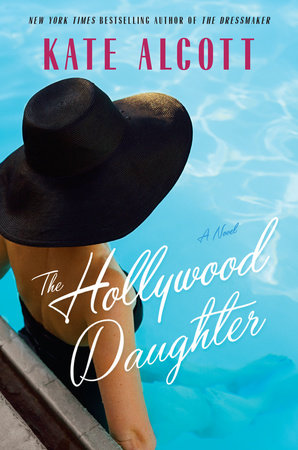 The following is from Kate Alcott’s novel, The Hollywood Daughter. Kate Alcott is the pseudonym for journalist Patricia O’Brien, who has written several books, both fiction and nonfiction. As Kate Alcott, she is the author of The Dressmaker (a New York Times bestseller), The Daring Ladies of Lowell, and A Touch of Stardust. She lives in Washington, D.C.

The cast and crew of The Bells of St. Mary’s transformed Saint Ann’s into something of a fairy-tale place for the brief span of days they were there. I watched the filming as often as I could, any concentration on my classes tossed to the winds. I had to pinch myself more than once. She was here, at a Catholic school, of all places—at my school, gliding down the meandering paths, looking saintly in her black robes.

We were all starstruck, of course. It might have been my imagination, but I thought I saw the real nuns stand straighter, and I could swear a couple of the younger ones were trying to emulate Ingrid’s walk.

Even Sister Teresa Mary fell under the spell. She was seen several times smiling and nodding as Bing Crosby whiled away the time between takes, unspooling one of his lazy, ambling jokes. He was a languid sort of man, I thought—always smoking his pipe, asking the older girls for a light when it went out, then laughing at their flustered responses.

“Oh, of course, you young ladies don’t smoke; I should have known,” he teased, with a knowing wink. Even Sister Teresa Mary smiled. My father said everyone from the studio was under strict orders to cater to her and keep her happy. If she grew restive with the chaos of cables and lighting equipment that seemed—briefly—to devour our school, it could cause trouble.

There was one worrisome moment.

“Doyle is making waves,” Father muttered at the end of the first day of filming. Mother automatically glanced around nervously, even though we were in our house and no one could possibly hear him.

“He’s complaining that the nuns didn’t have the right to give permission for the filming—as bishop, only he has the right. We’ve got people over at the chancery showing him the script now. Even the Legion of Decency couldn’t find anything wrong with this one.”

“He just wants his power acknowledged,” Mother said quietly. “To keep movie people a little afraid of him.”

“Very astute, Vannie,” Father said, raising an eyebrow as he looked at her. All was smoothed out by morning, and for a few days, my father glanced at Mother with an extra edge of respect.

The coming of Hollywood to Saint Ann’s stirred up the neighborhood in ways that Kathleen and I thought were funny. The raspy-voiced clerk who worked in the hardware store across the street sauntered over every day, peering at all the movie equipment in the parking lot with lustful melancholy; I wondered, What had he wanted out of life? Young mothers in flowered housedresses from the little stucco bungalows on the next block wheeled their sleeping babies as close to the action as they could, trying to pretend they weren’t yearning for a glimpse of Bing or Ingrid. They looked frazzled, most of them. They often had a toddler or two on the back of their baby buggies. It took me a while to realize how young they were—maybe only five or six years older than me. We students in our drab black dresses and class ties were given bright-colored badges by the movie crew so we could move freely around the school, even when they were filming. We stored up every little morsel of movie gossip we could, to pass on nonchalantly to all the neighborhood watchers still hanging around after school.

The atmosphere was wonderfully relaxed. Between takes, Ingrid would put her feet up on a canvas chair and laugh and tell jokes with the crew members. “I can’t actually say I enjoy being a nun,” she said once to a Hollywood reporter visiting the set. “The best part of it is, nobody complains about my weight when I’m in this habit.”

We giggled over that, enjoying this little peek into our heroine’s sense of humor, and repeated it around the campus. “It is one of the advantages,” Sister Hildegarde, my Latin teacher, murmured to another nun with a faint smile. That was impressive: Sister Hildegarde had never been known to respond to a joke.

All the sideline vignettes were, to tell the truth, more interesting than the actual filming. A few minutes of watching the cameras turn, of standing on tiptoes, craning to see past the other girls, the nuns, and the crew members, and then long waits. And then shooting the same scene, again. And again.

“Grass grows faster,” we all told each other in a newly discovered weary way. Ten, maybe fifteen takes would consume hours. Kathleen and I agreed that each version of Ingrid floating across the main courtyard, appearing troubled as she worried about her beloved school’s financial future, looked pretty much like another.

Oh, we loved being jaded.

But not on the last day of shooting.

. . . Sister Mary Benedict kneels before the chapel altar. She has been told she is being transferred, and she thinks it is because of her efforts to save the school. “Remove all bitterness from my heart,” she prays as she struggles to accept the decision.

Father O’Malley and Sister Mary Benedict face each other in the courtyard; it is time to say goodbye. The tenderness they share, the respect . . .

As I watched, I had the most confused feelings; suddenly, irrationally, I wanted them to end up in each other’s arms.

. . . Sister Mary Benedict walks away. Father O’Malley is struggling: he can’t let her go like this. He calls her back, they stand face-to-face. “I can’t let you leave like this,” he begins. “I have to tell you the truth. When Dr. McKay said you were perfect, he was right. But he didn’t mean physically.”

What was wrong with me? What was I hoping for? I knew the script, I knew how this ended. What made me suddenly yearn for it to turn into a love story?

. . . “You have ‘a touch’ of TB,” Father O’Malley tells her gently. That is why she has to leave, to get proper treatment.

Relief and joy spread slowly across Ingrid’s luminous face. She is not being banished for trying to battle against the closing of Saint Mary’s. It is only health, after all, that has brought this forced, painful departure.

The spell we were all under did not snap immediately. First, there had to be a mass exhalation of breath. I stared at Ingrid, hardly believing that Sister Mary Benedict was fading before my eyes. In her place was this real person, turning to McCarey, a sudden mischievous look on her face.

“Please, can we do one more take?” she pleaded. “I know I can do this better, convey more.”

Who could refuse Ingrid? McCarey bent to her entreaty, and the cameras rolled again.

. . . Ingrid lifts her face to Father O’Malley. “Thank you, Father, thank you with all my heart,” she begins. Suddenly she moves close to her costar, and flings her arms around him. Bing Crosby, startled, has no time to move before she plants a lusty, wet kiss on his lips, and then—

“Thank you all, you wonderful women and girls!” Ingrid called out, then embraced Sister Teresa Mary as we all cheered. Even the representative of the Legion smiled, albeit a bit warily.

From THE HOLLYWOOD DAUGHTER.  Used with permission of Knopf. Copyright © 2017 by Kate Alcott. 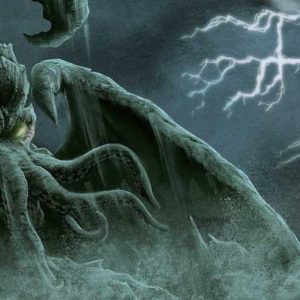 Paul La Farge and Ed Park: In Praise of the Old School Cold Take Paul La Farge’s new novel, The Night Ocean, is inspired by an episode in the life of the great horror writer H.P. Lovecraft....
© LitHub
Back to top