Paul La Farge’s new novel, The Night Ocean, is inspired by an episode in the life of the great horror writer H.P. Lovecraft. His editor at Penguin Press, Ed Park, has long been familiar with La Farge’s work, having edited dozens of his pieces in assorted publications.

Ed Park: I’m just looking up some past articles we worked on together—there are a lot of them! I’m struck by the fact that you were part of the very first Village Voice section I got to edit, as well as the very first issue of The Believer, a magazine I worked on for eight years.

Paul LaFarge: And you were the first editor I wrote anything for! I think the first piece I wrote for you was “In Search of the Fur Bat,” about the history of psychic research at Stanford; then I wrote an essay about the artificial language Volapük, which had about a million speakers in the 1880s, before Esperanto was invented. Later I wrote a short story about a school called “Bleak College,” which was, well, bleak. And those were all in the Village Voice’s Educational Supplement!

I loved working on those essays, and I didn’t know much about how things worked at the Voice, but I have to say, even then I was amazed that you let me write all those pieces. Now that I’m older, and I’ve written for other magazines, I am even more amazed, in a good way. Who else would ever have assigned me an essay about Volapük?

EP: I remember getting that first Voice piece, and smiling at the first sentence: “Stanford University’s Spanish Revival campus sprawls between Palo Alto and the foothills of the coastal mountains like a training center for Taco Bell franchise owners, a gigantic testament to the incompatibility of money and taste.”

PLF: Yeah, I’d just dropped out of a PhD program at Stanford, and that was my sense of the campus. But remember, I was coming from New York, and I had a lot of prejudices about California. Most of which I’ve outgrown, although I still think the Stanford campus is kind of quietly garish.

EP: I just did a double-take looking at that piece. It says that we published it 17 years ago. But we knew each other even before that.

PLF: We had the same writing teacher! I took an undergraduate writing workshop with Maureen Howard, who was just wonderful—in fact she was so wonderful that I’ve never taken another writing class. You studied with Maureen in a different class. And I’d stayed friends with her, and whenever I’d go to see her, at her apartment on Central Park West, she would tell me what a great writer you were, and how smart you were, and I’d sit there and drink tea and listen to her rave about you. I have to say that I was a little jealous. And then somehow, because of Maureen, I think, you sent me something you were working on, about Atlantis. And I had to admit that she was right.

EP: You wrote what I still believe to be the best single piece about Dungeons & Dragons ever published: “Destroy All Monsters,” which is collected in Read Hard, an anthology of Believer articles. Is it fair to say you got obsessed with the assignment?

PLF: Ed, thank you! That essay was a piece of utter madness. I wrote a letter to Gary Gygax, one of the inventors of D&D, to ask if my friend Wayne and I could go out to Wisconsin and play D&D with him, and to my amazement, he said yes. So we went out to Lake Geneva and played and talked to him for a couple of days. Then I came back and spent months and months reading about D&D and talking to people who’d been involved with the game in its early days, and also to people who’d known Gary when he went off to LA to become a movie producer—and then I had to go to LA, to see the vacant lot in Beverly Hills where King Vidor’s mansion used to stand—that was where Gary had lived. And it just went on from there. I think the essay took a year to write, which at the time seemed like a normal thing. You know, just another of those essays that you work on for an entire year. But in retrospect I can see that I’d become obsessed.

EP: It occurs to me that The Night Ocean is making a similar play for a cult or niche audience, the many people interested in Lovecraft and the Cthulhu Mythos, as well as those who don’t know about him or in fact dislike him. (A recent review begins, ” I’ve never been mesmerized by horror writer H.P. Lovecraft, but I was immediately spellbound by The Night Ocean.”) Could you talk about balancing your often recondite or subcultural interests with writing for a broader audience?

PLF: Part of that comes from writing so many pieces for the Village Voice and the Believer! I was taking on some very esoteric subjects, but writing for a completely non-specialized audience, which, I have to say, was a wonderful change from the academic writing I’d been doing at Stanford. So I had to figure out how to introduce the reader into these very particular worlds, each of which has its own terminology—Volapük has its own entire language!—and its own cast of peculiar and fascinating characters, whose names are totally unknown to the general reading public.

Now that I think of it, the way I introduced that Volapük essay, by writing about a time in the late 90s when I was at a party with my friend Herb, and I met a woman who spoke Volapük, was not unlike how The Night Ocean begins: a party, a chance meeting, the start of a relationship. Which was a way to pull the reader into this new, strange world.

EP: I remember talking to you several years back—you must have been in the middle of your Cullman research fellowship at the New York Public Library, diving into the letters of H.P. Lovecraft and the lives of some of the writers he intersected with. My memory is that you were contemplating a nonfiction book about these people. Do you remember when you realized it had to be a novel?

PLF: The historical material that shows up in The Night Ocean is so rich that I still think it would make a great work of nonfiction, but it would have to be written by someone even more obsessive than I am. There’s just too much material, not only about Lovecraft, but about his friends and protégés, some of whom became great writers and editors in their own right and who inhabited all these different worlds. Lovecraft knew Hart Crane, and he once went to a party in the apartment on Columbia Heights where Crane had written “The Bridge,” which was actually the building where Washington Roebling lived when he was building the Brooklyn Bridge—how much would you have to know, about weird fiction and 20th-century poetry (and architecture, too), to make that one scene come to life?

Then there’s Robert Barlow, the central historical figure in The Night Ocean. His life spans the worlds of weird fiction, experimental poetry in mid-20th century San Francisco, and Mexican anthropology and archeology, in English, Spanish, and Nahuatl. Barlow did so much in his short life—he died at 32—that he’s almost impossible to write about. Nine people have tried to write his biography, and none of them have succeeded.

Which isn’t to say that I wrote The Night Ocean as a novel out of sheer laziness. I knew from the beginning of the project that it would be about hoaxes and deceptions, among other things; some of the stories in it would be true but some of them would not, and the action of the novel would involve sorting the one kind of story from the other, to the extent that one ever can do that.

I spent about a year researching The Night Ocean, and I put a lot of what I learned into the book but far from all of it. I still have hundreds of pages of notes about people who I couldn’t find room for. There’s Hart Crane and Washington Roebling and an episode about the British fantasy writer and artist Mervyn Peake (the author of Titus Groan, etc.), and how his life was changed by his visit to the Belsen concentration camp just after the end of the Second World War in Europe, which I kept trying to work into my novel and never could. If someone else wants to borrow all those notes for a nonfiction book, they’re welcome to. 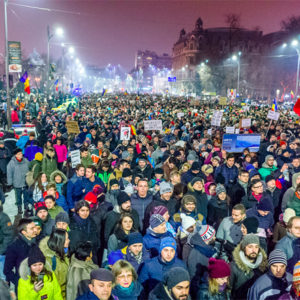 December 12th, 2016, 9pm I need to say it. I write an incredibly long and incoherent email to a friend about the Romanian...
© LitHub
Back to top