On the Boundaries That Define Our Lives

The Alpha and Omega

Our lives begin and end with walls. From the uterine walls we enter this world through, to our final resting place, we are surrounded. Formed from seminal fluid surging through canals, we are then suspended in serous liquid, awash in amniotic sacs. From bodies, we become body, embraced in the warmth of the womb. Once born, we are wrapped in blankets or enclosed in incubators while grandparents and friends stand peering through more walls made of glass. Encased in car seats on the ride home we are then carried to our cradles, always cuddled, our mother’s warm hands cupping our tiny heads.

From cradles we move to cribs, slightly larger, the walls formed of bars from where we watch the outside world. Mobiles spin above us like stars but we are still enclosed, until we graduate from cribs to beds and are then tucked in tightly at night and offered wards formed from words to keep us safe: sleep tight, don’t let the bedbugs bite, which I know has a historical meaning but I tend to think of, metaphorically, as our attempt to prevent outside forces from passing between our carefully constructed walls and somehow harming us.

Once free from the crib we still stay indoors. Around the walls of my daughters’ bedroom stand dressers and shelves of books like a second wall inside the first. On rainy afternoons we sit inside reading while the rain runs in rivulets down the windows or the first frost forms on the glass, adding another layer. As we grow older we leave our houses and board buses to school, or climb in cars to drive to our offices. We walk through narrow corridors to enter classrooms or cubicles, more walls within walls, where we spend most of our days before driving back home, the world moving outside the glass, and when we grow old we move out of our large houses into smaller apartments as the space becomes too much, and we wish to return to something simpler.

Tombs are the last walls we inhabit, when outside forces erode our mortal shells. In New Orleans, tombs have become part of the beauty of the city. The ground is saturated with water, so bodies buried below ground rise to the top as if they are floating back into the world. The tombs are elaborate, carved with angels and crosses. They house entire families. After hundreds of years the wooden caskets rot, and the bones intermingle inside.

Our oldest archaeological finds are tombs. In 209 or 210 BC the emperor Qin Shi Huang of China was buried in an underground tomb with over 8,000 warriors carved from earth. The terracotta warriors are life-sized. No two are alike. They vary in dress, hairstyle, and height, depending on rank. According to the historian Sima Qian, the terra cotta warriors were to help the emperor rule another empire in the afterlife. The mausoleum, Sima Qian wrote, held one hundred rivers of mercury, palaces, treasures, and towers, and above this the heavenly bodies, all enclosed within the earth.

The largest and most lavish tombs in the world are the Great Pyramids. For 3,800 years the Great Pyramid of Giza was the tallest building in the world. It is comprised of 2.3 million stones, some of them dragged, floated, or rolled from 500 miles away. The pharaoh Khufu, for whom it was built, was seen as a god, and the tomb a continuation of his divinity. It was not simply a tomb, but a causeway between heaven and Earth only he could use.

The smallest tombs in the world are caskets designed for miscarriages in the first trimester. They measure 10 inches by 5 inches by 4 inches. They are lined with flannel for warmth and are glued forever closed. They are small enough to hold in your hands.

By the time man learned to form words into history he had also learned to form the earth into fortifications. In much the same way clay tablets were shaped to accept cuneiform or ancient plants pressed to hold hieroglyphics, our ancestors erected walls. They were formed of dirt held together with water and dried or burned into bricks, or stone dug from the earth and dragged in place and chiseled by peoples so distant from us today we have few records of them other than the earth they left behind.

The Hittites, Sumerians, Egyptians, Babylonians, Akkadians, Trojans, and Assyrians all built walls around their cities. They expanded and developed and traded the knowledge of erecting fortifications by attacking one another, learning through trial and error the strengths and weaknesses of opposing walls. When he felt Babylon vulnerable to attack, Nebuchadnezzar reinforced the city with a wall and moat inside the old walls, forming a double line of fortifications. In the palaces of Assyria towers guarded gates, and wall-walks and embattled parapets sat atop the walls. In the vast distances of history, even small cities stood protected by walls.

The remains of some of these walls and ancient forts still stand, although our knowledge of their completed form comes not from the crumbling ruins but from art. On the south wall of the Great Hypostyle Hall of the Ramesseum, one drawing shows the besieged city of Dapour of the Hittites. Atop the crenellated walkways and towers, the Hittites attempted to hold back the attacking Egyptians with spears and arrows and rocks. The Egyptians advanced using long shields while the Hittites rained down arrows from the three walls. From the keep in the center of the city wooden boards were extended, and the Hittite soldiers fought from these boards as well. The Egyptians, upon reaching the walls under the cover of their shields, raised scaling ladders. A few of them made it to the top, and were thrown to the ground.

So Many Forts, So Close to Home

I grew up a few miles away from Fort Chaffee, one of the largest live-fire forts in the US. On weekends National Guard and Air Guard units dropped bombs on the surrounding hills, and the windows in our houses rattled and shook. When we drove through Fort Chaffee, MPs stared at us with mirrored eyes. F-16s flew overhead, and artillery fired in the distance. Some days the roads were closed to civilians, and other days fresh patches of asphalt marked where bombs had strayed off target.

Fort Chaffee butted up against Fort Smith, which in the early 1800s had been a frontier military post, but was now a city of 75,000 people. A few hours east were Camp Robinson and Jackson Air Force Base and Pine Bluff Arsenal, one of six Army installations in the US that store chemical weapons. In the early 1960s my grandfather applied for a job at Pine Bluff Arsenal. After interviewing inside the facility that made chemical weapons out of unhatched chicken eggs, he did not accept the position.

In 1990, when Saddam Hussein invaded Kuwait, I was in Fort Sill, Oklahoma, another large, hot, live-fire fort where the earth randomly shook around us from the force of bombs. A year later I went to Fort Jackson in South Carolina, where it rained every afternoon at four, and then the ground steamed in the humidity after the rain. During one weekend of my National Guard service, my unit flew to Fort Hood, Texas, for training. Our C-130 landed on a remote airstrip at noon, and because the fort was so large night was falling before the buses arrived to pick us up. I remember the miles and miles of scrub brush and mesquite, faint breaths of wind in the hot afternoon, shadows stealing slowly across the landscape, making it almost pleasant to be where we were.

In the mid-’90s, not long after I left the military, I worked for a time in Missouri. Driving through the countryside one afternoon I found myself on Fort Leonard Wood. I was lost and asked an MP for directions. He was polite, but his mirrored sunglasses unnerved me. I was sure that I would somehow be forced to rejoin.

A year after that I was in Colorado Springs, Colorado, where the Air Force Academy shimmers in the shade of the mountains that NORAD hides under. Now I live in North Carolina, only an hour’s drive from Fort Bragg, home of the US Special Forces. To the west lies Fort Fisher, a confederate fort during the Civil War. To the north is where Camp Butner used to be. During World War II it served as a deployment area for the western front. Now the camp has been incorporated as the township of Butner, which is home to several state and federal prisons.

There are roughly 450 military bases in the United States. Worldwide, there are between 700 and 900 United States military bases in over 150 countries. New bases have been built in seven countries since September 11, 2001. There are thirty-eight large and medium-sized American facilities around the world, mostly air and naval bases for our bombers and fleets. In 1898, at the height of imperialism, Great Britain controlled thirty-six naval bases and army garrisons. In 117 AD the Roman Empire required thirty-seven major bases to police its realm from Britannia to Egypt, from Hispania to Armenia.

A few years ago, over one hundred acres of Fort Chaffee caught fire. The old barracks burned, and afterward with smoke rising from the ash of the buildings like ghosts, the land looked like war had come, or that the bombs that had always fallen finally missed their mark.

From my computer desk I can look out my window into the backyard and see two different walls. One is my fence separating my yard from my neighbor’s. The other is his fence separating his yard from mine. I am not counting the window, or the wall that encases it. 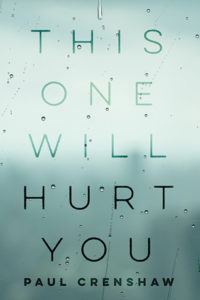 From This One Will Hurt You. Used with permission of Ohio State University Press. Copyright © 2019 by Paul Crenshaw.

Paul Crenshaw is the coauthor of Text, Mind, and World: An Introduction to Literary Criticism. He was a finalist for the Bakeless Prize and the recipient of a Pushcart Prize in 2017. His writing has appeared in Best American Essays, Brevity, North American Review, Ascent, Gulf Stream, The Rumpus, Hotel Amerika, and River Teeth, among many other venues. 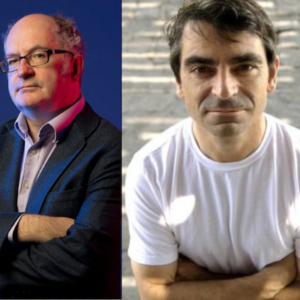 John Lanchester's novel, The Wall, is available from W.W. Norton. * Joe O'Neill: None of your four previous novels particularly...
© LitHub
Back to top
Loading Comments...