On the Ongoing Fight Against the Censorship of Ideas

Like small pox and vinyl records, book banning is something many Americans like to think of as history. But according to the American Booksellers for Free Expression (ABFE), the practice persists. ABFE, which from its headquarters in White Plains fights book banning across the country, keeps a list of books challenged each year by American public libraries and schools. In 2016, that list includes Khaled Hosseini’s The Kite Runner, Toni Morrison’s Beloved, and Emily M. Danworth’s The Miseducation of Cameron Post. Most of the titles are by LGBTQ authors and authors of color who write about life beyond white, straight, middle-class America.

One way ABFE fights book banning is to partner with other organizations in the publishing industry (including their parent organization, the American Booksellers Association) to host Banned Books Week, a seven-day celebration that takes place in bookstores and libraries all over the United States. This year, the event runs from September 25th to October 1st with a focus on “diversity,” a factor behind many book challenges. “There were over 300 book challenges in 2015,” said Chris Finan, Director of ABFE, in an interview. “And themes of race, ethnicity, and sexual preference have been a large part of why those books got challenged.”

On its website, ABFE acknowledges that diversity is difficult to define. One definition that has informed their thinking comes from the ALA’s Office for Intellectual Freedom:

Historically, other reasons for banning books include: sexual imagery, violence, and any content considered obscene. Indeed, arguments over obscenity—how its defined and how that definition relates to the First Amendment—have been at the heart of banned-book controversies throughout the 20th and 21st centuries.

Many historians point to Harriet Beecher Stowe’s Uncle Tom’s Cabin as the first book in the United States to experience a ban on a national scale. The Confederacy barred the book from stores not only for its pro-abolitionist agenda, but because it aroused heated debates about slavery (some historians argue that the book catalyzed the Civil War).

A decade after the war, a carping moralist government official named Anthony Comstock convinced the United States Congress to pass a law prohibiting the mailing of “pornographic” materials. His definition of the term was murky at best. Anatomy textbooks, doctors’ pamphlets about reproduction, anything by Oscar Wilde, and even The Canterbury Tales were deemed too sexy to send through the mail.

These bans, or “comstockery,” as the practice became known, continued into the new century. But by the 1920s, shifts in politics and social mores led booksellers to see themselves as advocates for people’s right to read whatever they wanted. Then, in 1933, an influential court case—The United States v. One Book Called Ulysses—helped usher in a new era of legal interpretation of the First Amendment.

In that court case, Judge John M. Woolsey overturned a federal ban of James Joyce’s Ulysses—the ban had been in effect since 1922, and court transcripts reveal that the judge who banned the book also remarked that it was “the work of a disordered mind.” Woolsey, who admitted to not liking the novel, found legal cause to challenge the previous judge’s definition of pornography—and by extension, his definition of art. He ultimately ruled that the depiction of sex, even if unpleasant, should be allowed in serious literature. His final edict is at once hilarious and evident of a mind capable of separating legal philosophy from personal preference: “[W]hilst in many places the effect of Ulysses on the reader undoubtedly is somewhat emetic, nowhere does it tend to be an aphrodisiac.”

The case set an important precedent. However, Comstock Law remained on the books until 1957, when the Supreme Court tried Roth vs. The United States. The plaintiff was Samuel Roth, a writer and bookseller convicted for mailing pornographic magazines to subscribers. His trial forced the American legal system to once again reconsider its definition of obscenity. The Court’s final decision was bad for Roth: his conviction was upheld, and he remained in prison until 1961. But it was great for lovers of books: the definition was narrowed to apply to only that which is “utterly without redeeming social importance.” That narrowing made room for books depicting sex and violence. Even Judge Woolsey had found Ulysses to have social importance.

In the decades that followed, public officials would continue to challenge the Court’s 1957 definition of obscenity, including Supreme Court Justice Potter Stewart, whose personal definition famously began and ended with the declaration “I know it when I see it.” But in general, the 1960s and 70s witnessed a simultaneous drop in instances of book bans and rise in more explicit art. Artists and authors felt freer than ever to experiment. Consumers were more willing than ever to un-clutch their pearls and engage with racy material. Sex was mainstream in the novels of John Updike and Erica Jong. Then America elected Ronald Reagan.

“Reagan didn’t run on a campaign of anti-pornography,” Finan clarifies. “But he nevertheless ran an election that depowered those who fought for First Amendment freedoms. [His] election encouraged challenges by people who were unhappy with books in schools and libraries that were increasingly realistic in their depiction of life.” The number of challenges to books made by school boards and libraries rose dramatically: “Suddenly we were facing 700-800 challenges a year,” says Finan. In 1982, the ALA responded to this renewed culture of censorship with Banned Books Week. “The point of the event was to get people to understand that these books weren’t pornographic or excessively violent, but simply depicting the real world…and that many were classics of American literature,” Finan says. “Banned Books Week was the first real [American] celebration of the freedom to read.”

In those early days, Banned Books Week consisted almost entirely of libraries and bookstores hanging posters and displaying banned books. “Those displays were enormously effective communication tools,” says Finan, “because people would wander over and find out that the books they love had been challenged. Suddenly they understood that censorship isn’t just about fringe literature.” Today, those displays remain a centerpiece of Banned Books Week, but partnering sponsors are also seeking to involve readers in other ways. The Washington, DC Public Library, for example, hosts a city-wide scavenger hunt of banned books that began on September 1st and will continue until the end of the month. The books, which have been wrapped in black paper printed with words like “SMUT” or “FILTHY,” have been hidden on shelves in libraries and bookstores all over DC.

The Comic Book Legal Defense Fund (CBLDF), another sponsor of Banned Books Week, has published a handbook that lists which comic books have been censored and outlines what readers can do to fight censorship. “Since 2011, at least one graphic novel has been included on ALA’s annual list of the ten most frequently challenged books,” said Betsy Gomez, Editorial Director of CBLDF, in an interview. “In 2015, CBLDF fought more than 24 attempts to ban books, including the comics Drama, This One Summer, The Sandman, Fun Home, Persepolis, Palomar. So far, in 2016, CBLDF has defended a dozen books.” The handbook includes programming ideas for educators and libraries to engage their communities in discussions about banned books throughout the year.

Organizations with no official connection to Banned Books Week are also getting involved. Wordier Than Thou, an open mic storytelling group in Pinellas Park, Florida, began presenting last year an annual burlesque show inspired by selected banned books. “[The show] definitely gets people talking about literature,” wrote Tiffany Razzano, founder of Wordier Than Thou, in an email. “[Last year], throughout the night people would come up to me and tell me about their favorite banned book.” The show, which features area burlesque favorite Mayven Missbehavin’, makes thematic sense: “It’s supposedly offensive material [interpreted by] scantily clad women performing classic burlesque stripteases,” she writes. For the sake of surprise, Razzano wouldn’t disclose which books would be featured this year. But last year’s performance included Gone with the Wind, 1984, and The Scarlet Letter.

It’s rare today for a book banning case to make it to the federal courts, but many challenges to books are still taking place on the state and local levels. At the time of this writing, ABFE has joined a protest against the Chesterfield County Public Schools in Virginia, which seeks to remove Rainbow Rowell’s Eleanor & Park and other titles from students’ voluntary summer reading lists. The proposed removal is “particularly outrageous,” says Finan, because the books aren’t a part of the school’s required curriculum.

If school administrators are attempting to limit even elective reading, what does the future hold for students who want access to all books, classic and contemporary—books that might broaden their understanding of the world? “The problem of book banning hasn’t gone away, and it probably won’t,” Finan laments. “There are always going to be struggles over the proper limits to free speech.”

The Case for White Curiosity 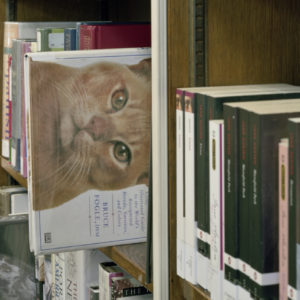 When architectural photographer Elizabeth Felicella was not working for clients, she spent her free time photographing all 210 branches...
© LitHub
Back to top