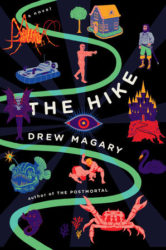 The following is from Drew Magary’s novel, The Hike. Magary writes for Deadspin, NBC, and Maxim. He has also contributed to Rolling Stone, Comedy Central, New York Magazine, GQ, ESPN, Yahoo!, Playboy, Penthouse, and various other media outlets. Magary is the author of The Postmortal, a finalist for the Philip K. Dick and Arthur C. Clarke Awards.

There were deer all over the road. He drove past a street crew in orange vests carrying a dead one off to the side of the highway, gripping the animal by its dainty hooves and moving it like they were carrying a small table upside down. After that, he saw more and more of the deer: some whole, some ripped in half, some just pieces of raw meat. Some of them were consigned to the shoulder, and he wondered if they had been dragged there or if the big, hulking trucks had plowed into them and chewed them up and spat them out in random pieces off to the side. There were a lot of trucks on this highway, all of them faceless. They didn’t seem to be driven by people at all. They were just there, seemingly operated by some grand master switchboard, programmed to never stop. And they were legion. They had paved the asphalt with all that deer blood under him.

His only companion in the car was the disembodied GPS lady voice coming from his phone. She kept silent for fifty miles as he looked out his window at the last gasps of fall in the distant hills—pretty red and yellow swaths of foliage surrounded by sad patches of gray, like an unfinished oil painting. Eventually, the GPS, with an inhuman calm in her voice, led him off the highway, down a ramp and to the right, then up a hill and to the left. Then she commanded:

Eventually, the GPS stopped lying to him, and led him up the steeply sloped driveway of a small mountain resort. It was a wedding mill. He could tell. There was an entire villa of wedding party bungalows, along with designated “Smile Spots” where a pushy photographer could hold a dozen groomsmen hostage for forty-five minutes without access to a cocktail. He drove up the private road, past a bridal salon and an open courtyard for summer ceremonies, all the way to the surprisingly dumpy main inn at the end of the loop. It was a Tuesday. Not even cheapskates get married on a Tuesday. His was one of only three cars in the driveway. He got out and left a message for his vendor:

He walked through the main entrance and was greeted by an old, shabby lobby. Yellowed wallpaper. A table of frosted, maple leaf-shaped cookies wrapped up in little bags that cost five bucks each. Coffee urns that had been drained hours ago. Off to the left, Ben spied a wooden bar with swivel stools, but no bartender present. A small girl in a billowy cupcake nightgown danced around the cookie table in her bare feet as her mother screamed at her.

“Will you get dressed? This floor isn’t clean!”

She shooed her daughter up the stairs as Ben walked over to the reception area. No one was at the desk, but he could see a sad little office open behind it. He let out a meek “Hello?,” the kind of “Hello?” you use when you creep downstairs at night to see if a robber has broken in. A short old lady shuffled out of the office and took his credit card and ID.

She looked at him funny. He was used to that. He had a long scar that ran down from his eye to the corner of his mouth. Whenever people looked at him, they saw the scar and assumed he was a mean person, even though he wasn’t. Or, at least, he wasn’t in the beginning.

“What time does the bar close?” he asked the clerk.

“I think the bar closes around nine.” His little business dinner would probably end well after that. Drinking at the hotel would take more planning than drinking at a hotel usually requires.

“It’s very pretty around here. Is there a path I can go hiking on?” he asked her.

“No, I don’t think we have any paths around here.”

Ben couldn’t believe that. You’re in the middle of a gorgeous mountain region that has long been settled by humans, and you don’t think anyone has blazed a trail back there? He was gonna walk anyway. He’d find something.

She checked him in and gave him a room key. An actual key. Not a key card.

“Ma’am, can you tell me where the elevator is?” he asked her.

Ben grabbed his rollerboard and awkwardly trudged up the staircase with it. There was no porter to help. The hallway upstairs was alarmingly narrow. He would’ve had to turn sideways to let another man pass by. He came to room 19, turned the key, and was greeted by a musty, red-painted room. Nothing about the joint felt comfortable. It was like staying at a hated aunt’s house.

“Little shaky, to be honest. Not wild about the idea of staying an entire night here.”

“Oof. Don’t put your suitcase on the bed. Bedbugs.”

“I’ll have you know that I put it on the table. It never touched the bedspread.”

“It’s pretty here, though. You could have come. Oma could have looked after the kids.”

“Yeah, that’s true. How are things there?”

“I had to kill a huge cricket in the basement. Second biggest one I’ve ever seen.”

“Yeah, so enjoy the time to yourself, you sucker.”

“No worries. Love you.” With three children, they never properly finished any conversation.

He threw on his workout clothes and walked back downstairs, passing through the empty lobby to a small fitness center and a pair of glass doors to the outside. He had his phone and room key on him, but nothing else. Behind the main inn was an open gravel driveway and a flimsy shed for the groundskeepers’ equipment: ATVs and lawn mowers and piles of mulch and whatnot. Past that, he could see a flattened road that led into the countryside. Looked like a path to him. Maybe it was for authorized personnel only, but no one was around to stop him. He cruised past the shed and found the trail widening in front of him. After three minutes, he came across a birdhouse and a trail posting that read “0.1 Miles.” He felt the urge to uproot the sign out of the ground and bring it back to the lobby.

Look at this, you crazy lady. Look at the marked path that’s right behind your hotel.

Ben kept on walking. The path ran atop an esker, with the ground sloping down on either side, like moving along one continuous peak. Down below he could see a valley that was blanketed by massive estates: acres of pristine grass that required hours upon hours of care every day to maintain. He saw big houses plopped down in the center of those green fields, each one fit for a retired president. They probably had kitchens with marble islands and everything. You could have your friends over to one of these houses and serve them fine cheeses and drink good red wine and make merry from middle age until death. It would be a nice little rut to find yourself stuck in. He wanted to jump off the mountainside and fly down to one of them.

The rest of the path beckoned. He felt the urge to jog but a history of knee injuries made that dicey. His right knee was a gnarled root of scar tissue and grafted ligaments, and he would rub it like a talisman whenever he exercised, even when it didn’t hurt. So he gave the knee a reassuring pat and walked faster. He passed a second marker, and then a third, and then a fourth, which was encircled by birdhouses. They really were houses, too—with shingled roofs and steeped gables and little doors and windows for a family of sparrows to peek out of. Maybe they had kitchen islands as well. Maybe everyone got a cool house around here.

And then he came to the half-mile marker and found a circle of benches built from tree-trunk sections that had been sawed in half and bolted to big flat discs taken from sections of another tree. There was a stone pit in the center and a scattering of ashes. From any seat, you had a nice vantage point of the surrounding Poconos. You could smoke pot here. You could play guitar here. You could split a flask of whiskey here and then go have sex behind a tree. It was

that kind of spot. A good spot. Back near his home in Maryland, there weren’t many spots like this. Things were cramped and congested and busy, every last bit of real estate claimed. There were no more secret passageways.

The path circled around the sitting area and led right back to the inn. This was the end of the trail . . . except. Except there were ATV tire tracks leading away from the circle and down into the hard forest below. He took out his phone (he could never go very long without checking it) and noted the time: 3:12

p.m. There was no point being stuck back in Bed-and-Breakfast Land, suffocated by all that quaintness that only people over sixty yearn for. He had time. He had all the time in the world. And the GPS could always lead him back, even if that meant the occasional hiccup. When he was getting ready this morning, he accidentally pressed the walking prompt for directions instead of the driving prompt. The prompt told him he would need eight days to walk to the hotel. He laughed when he saw that.

He pocketed the phone and followed the tracks. 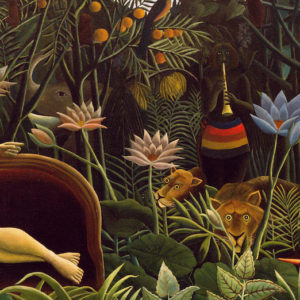 In Praise of the Micro Landscape Two years ago in Connecticut, I shared a plateful of Venezuelan-style arepas with my former literature professor, Bernard....
© LitHub
Back to top