Angela Palm on Learning to See In Miniature

Two years ago in Connecticut, I shared a plateful of Venezuelan-style arepas with my former literature professor, Bernard. We sat at the counter like two workaday men after a long shift, our knees abutting the bar’s wood paneling. The bar, a typically comfortable setting for me, seemed foreign given our history of speaking only in classrooms or during his office hours—the way seeing a priest in the grocery store can be disorienting.

As we ate, Bernard told me about the time he had skipped out on a conference to hike the Hoh National Rainforest off the coast of Washington in search of a protected square inch of silence. True silence, I learned, was endangered: there were very few places left the United States where one could not hear any human-made noise. The symbolism of this protected square inch was as important as its impact on hikers’ busy brains and the park’s local fauna. The sanctity of the miniature space was a synecdochical stand-in for a society drowning in the wake of its own advancement, a pinprick of last light bottled for the world’s final dawn.

I had not seen Bernard for ten years—not since I’d been in his classes as an undergrad. The story he told me reminded me of things I had forgotten about him: the way he fascinates over the mapped face of the earth; how he had ushered me toward the profound stories and histories in even the smallest of landscapes—the woman lying on a sofa in a jungle in Henri Rousseau’s painting “The Dream,” for example. Bernard had always dropped dollops of information on me without warning, leaving me behind in the widening trenches of my thoughts, a vast crevice beneath a shadow, as he moved quickly onto another track of conversation.

I lived in Colorado once for about seven months, and it never began to feel like home. There wasn’t much grass. The air was too crisp and too thin, causing an unfamiliar sensation in my chest. The sharp jags of the Rocky Mountains lined with scrims of conifers cut an unfamiliar horizon.

In Vermont, where I now live, a similar scenario unfolds. I can’t seem to orient myself when I travel outside my small city, even after four years of living here. What boundaries does the Winooski River carve out, exactly? And why does South Burlington appear to lie east of Burlington, rather than south? I didn’t know this area’s history yet. I didn’t know the ways power and privilege, sudden loss, mysterious desertion, and acts of nature had shaped it.

I didn’t understand why I wasn’t connecting with Colorado’s striking vistas or why I was so disoriented by Vermont after decades of having made claims about my “natural sense of direction” until I read An Unspoken Hunger: Stories from the Field by Terry Tempest Williams, who wrote that “each of us harbors a homeland, a landscape we naturally comprehend.” The homeland I naturally comprehended was not Western or Northeastern. It was Midwestern: flat horizons and gridded road systems, bright green and gold, dotted with silos and bored livestock.

It was smaller spaces, too: the space of my childhood bedroom, the six cubic feet beneath the vanity my mother had haggled for at an estate sale, around which I’d draped a sheet to create a reading nook below. It was knowledge of how to make good use of a flooded yard. It was my favorite cubicle at the Indianapolis Public Library and the view of the city’s near-eastside. The six-table restaurant on Pennsylvania Avenue, where I ordered breakfast burritos with lime-cilantro sour cream from the middle-aged woman with wide, able hips. It was the dark, dingy dive bars of my late teens and early twenties and the murky Kankakee River, whose banks formed the backdrop of my youth.

A place, or portion of a place, tells just as much of the story as the people moving about in it. And maybe tells it truer.

These smaller, personal landscapes, comprehended seemingly intuitively, are linked to memory and experience. They render new views foreign, transforming them as opportunity, adventure, reinvention. In my writing, personal landscapes—both micro and macro—appear as story settings, then unfold as symbols, then reappear as stories. They serve as a kind of metonymic understanding for their larger locales.

The bar on the riverbanks, where I worked for years as a busser and interacted with the regular clientele late into the night, was a part of a whole, a representative sliver of rural culture. And when I focused on the details of that familiar setting—the grease-slicked, thin carpet, the jukebox that seemed to play exclusively Led Zeppelin and Hank Williams, the abundance of beer-brand, mirrored wall hangings in which women checked their smeary make-up, the hand slipping another’s tip into a stained apron—the essence of the larger place came through. As Alison Lurie notes in The Language of Houses, a book that analyzes the messages buildings send us, “It is possible to lie in the language of buildings, though not as easily in speech or writing.” A place, or portion of a place, tells just as much of the story as the people moving about in it. And maybe tells it truer.

In her essay “On Miniatures,” by which she means “workable things on very small scales,” Lia Purpura says that small things transcend their size. Though she’s referring to complete miniatures and not things which are merely a part of a whole, the concept holds for micro landscapes. There is intimacy in such places, and an attention to detail that, like complete miniatures, suggests “there is much to miss if we don’t look hard at spaces, crevices, crannies.”

A look at the miniature view cut by a window: Catherine looking out at the moors in Wuthering Heights, fretting from inside, and Anne Carson’s parallel vista while staying at her mother’s house in “The Glass Essay.” These are little landscapes of loss and stagnation, the women confined within the walls of their respective homes. The distance, those moors that swallowed their respective men, swells outside the window. In the opening essay of The World Is on Fire, author Joni Tevis tours the endless rooms in heiress Sarah Winchester’s hodgepodge house. Some of the rooms are windowless, evidence of the woman having sealed herself off from impending apocalypse. Another swallowing up altogether.

Bernard had followed the trail into the Hoh Rainforest as far as he could, but the light had grown too dim for him to continue and still be able to make it out of the woods by nightfall. So he turned around, trekked back down the path, and back to the conference center. There, he took his place among the rest of the attendees, engulfed in the cacophony of academia, just in time for the keynote.

I did not have to tell my friend that he had an epic day. I did not have to tell him that he could write a book about that day, or about how walking through space moves a story forward, because he likely had already thought of that particular irony himself, as a Joyce scholar. I did not have to share with him as evidence my walk through my own past, pen to paper, foot to path, parsing out the landscapes within me, from which I barely had the courage to escape as a means to move forward and through.

“I never found it,” he told me as we drank our beers. There was a hint of disappointment in his voice as he adjusted his glasses, a modern version of the ones I remembered from college. But he’d had a great hike, and wasn’t the Puget Sound beautiful? Neither of us could find fault with that: beauty for the sake of beauty; experience for the sake of experience. The walk, the movement of his feet, his mind spread out upon the landscape like a soft wet blanket, could be enough.

Angela Palm is an author, editor, and writing instructor. Her first book, Riverine: A Memoir from Anywhere but Here was recently published by Graywolf Press. 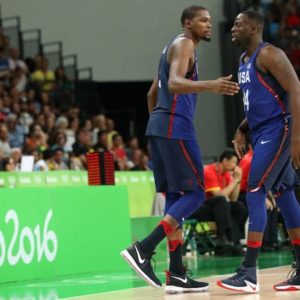 Is the US going to win another gold at men’s basketball? And what does it say about me that I care as much as I do? Not just...
© LitHub
Back to top