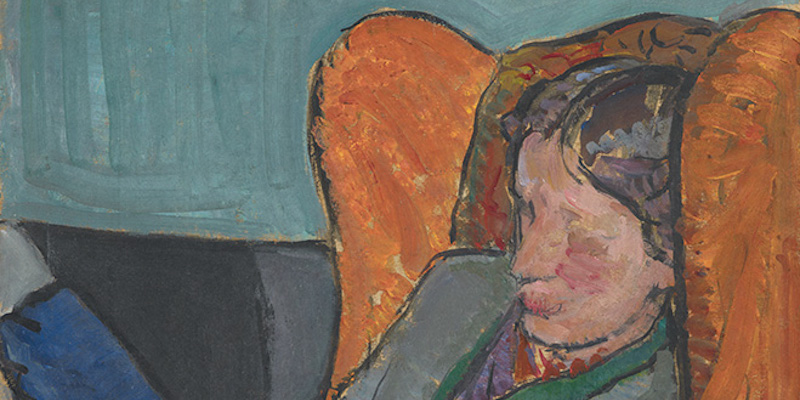 “The flap of a wave; the kiss of a wave.” 8 of the best uses of water in Virginia Woolf’s novels.

My fellow and favorite Aquarian, Virginia Woolf, would have turned 140 today. And given Aquarius’ water-bearing status, is it any surprise that we find water—in metaphors, in imagery, in rhythm, in flux, in just about everything—throughout Woolf’s novels? Not at all. And given Aquarius’ reputation as esoteric and eccentric, is it any surprise that looking through Woolf’s writing about water—and her use of watery imagery—takes us on a complicated dive (yes, pun intended) into loneliness, melancholy, sexuality, time, girlhood, and loss? So to honor Woolf on her birthday, I have gathered eight of the best watery scenes in her novels for you to plunge into (again, pun intended). Enjoy:

“The sun had not yet risen. The sea was indistinguishable from the sky, except that the sea was slightly creased as if a cloth had wrinkles in it. Gradually as the sky whitened a dark line lay on the horizon dividing the sea from the sky and the grey cloth became barred with thick strokes moving, one after another, beneath the surface, following each other, pursuing each other, perpetually.”

“‘Oh, to awake from dreaming! Look, there is the chest of drawers. Let me pull myself out of these waters. But they heap themselves on me; I am turned; I am tumbled; I am stretched, among these long lights, these long waves, these endless paths, with people pursuing, pursuing.'”

“‘What I say is perpetually contradicted. Each time the door opens I am interrupted. I am not yet twenty-one. I am to be broken. I am to be derided all my life. I am to be cast up and down among these men and women, with their twitching faces, with their lying tongues, like a cork on a rough sea. Like a ribbon of weed I am flung far every time the door opens. The wave breaks. I am the foam that sweeps and fills the uttermost rims of the rocks with whiteness; I am also a girl, here in this room.'”

From To the Lighthouse:

“They came there regularly every evening drawn by some need. It was as if the water floated off and set sailing thoughts which had grown stagnant on dry land, and gave to their bodies even some sort of physical relief. First, the pulse of color flooded the bay with blue, and the heart expanded with it and the body swam only the next instant to be checked and chilled by the prickly blackness on the ruffled waves. Then, up behind the great black rock, almost every evening spurted irregularly, so that one had to watch for it and it was a delight when it a came, a fountain of white water; and then, while one waited for that, one watched, on the pale semicircular beach, wave after wave shedding again and again smoothly film of mother-of-pearl.”

“It was his fate, his peculiarity, whether he wished it or not, to come out thus on a spit of land which the sea is slowly eating away, and there to stand, like a desolate seabird, alone. It was his power, his gift, suddenly to shed all superfluities, to shrink and diminish so that he looked barer and felt sparer, even physically, yet lost none of his intensity of mind, and so to stand on his little ledge facing the dark of human ignorance, how we know nothing and the sea eats away the ground we stand on—that was his fate, his gift.”

“It was raining. A fine rain, a gentle shower, was peppering the pavements and making them greasy. Was it worth while opening an umbrella, was it necessary to hail a hansom, people coming out from the theatres asked themselves, looking up at the mild, milky sky in which the stars were blunted. Where it fell on earth, on fields and gardens, it drew up the smell of earth. Here a drop poised on a grass-blade; there filled the cup of a wild flower, till the breeze stirred and the rain was spilt. Was it worth while to shelter under the hawthorn, under the hedge, the sheep seemed to question; and the cows, already turned out in the grey fields, under the dim hedges, munched on, sleepily chewing with raindrops on their hides.”

“Slowly welling from the point of her gold nib, pale-blue ink dissolved the full stop—for there her pen stuck, her eyes fixed, and tears slowly filled them. The entire bay quivered; the lighthouse wobbled; and she had the illusion that the mast of Mr Connor’s little yacht was bending like a wax candle in the sun. She winked quickly. Accidents were awful things. She winked again. The mast was straight; the waves were regular; the lighthouse was upright; but the blot spread.”

“What a lark! What a plunge! For so it had always seemed to her when, with a little squeak of the hinges, which she could hear now, she had burst open the French windows and plunged at Bourton into the open air. How fresh, how calm, stiller than this of course, the air was in the early morning; like the flap of a wave; the kiss of a wave; chill and sharp and yet (for a girl of eighteen as she then was) solemn, feeling as she did, standing there at the open window, that something awful was about to happen.”