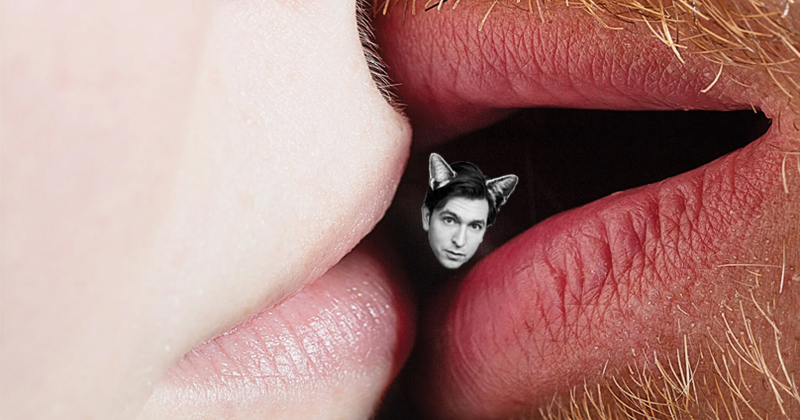 The first reviews of Cat Person: The Movie are in.

Cat Person, the Emilia Jones- and Nicholas Braun-starring movie adaptation of Kristen Roupenian’s mega-viral 2017 New Yorker short story about a twenty-year-old woman who has a brief and unpleasant fling with a shlubby manchild his thirties, premiered at Sundance on Saturday.

If you’re wondering how they turned a 7,000 word short story in which—excruciating sex scene aside—nothing much happens, into a two-hour feature film, well, you’re obviously not one of the 14 people who saw On Chesil Beach: The Movie. Tender or torturous moments can be extended for minutes, lush cinematography can become become a silent supporting player, backstories can be fleshed out in intriguing ways, magnetic new characters can buttress a fragile two-hander. Or, as would appear to be the case in this instance, you can always just tack on a big ‘ol horror movie ending.

To be fair to director Susanna Fogel and screenwriter Michelle Ashford, it sounds like both approaches have been employed, with the latter receiving the lion’s share of the negative publicity. The first reviews, which have been dribbling in over the last 24 hours, have been what I would call mixed-to-very-bad, with almost every critic commenting unfavorably on “bafflingly silly” third act:

“What’s disappointing is how lost this Cat, which premiered last night at the Sundance Film Festival, seems to get along the way: a lean and potent exploration of modern dating padded out into a strenuously self-aware dramedy that flips to half-cocked, wildly improbable thriller in the (wholly invented) third act … By swerving into territory already better owned by outrageous indies like Promising Young Woman—and to a lesser degree, last year’s Sundance breakout Fresh—Cat forfeits its own underlying message, without finding anything else new or even particularly coherent to say. What’s left is just another ‘Lol isn’t dating crazy?’ hot take, fattened and declawed.”

“What follows is a scene of such intense awkwardness and nuclear-grade cringeworthiness that you may want to avoid attempting coitus ever again. Playing out in real time, it’s a symphony of sexual faux pas, male obliviousness, contradictory statements and views on consent…and barked porno-scenario recreations. It ends with Margot having an out-of-body experience, looking down on herself as Robert, in full oil-derrick mode, treats her like a prop. When he’s finished, he whispers ‘Good girl.’ It’s the inverse of physical intimacy. More like pure, bad-sex nightmare fodder … By also trying to mold this material into a prefab horror template, however, Cat Person’s cup truly spilleth over. That’s why we get a climactic scene involving a fight, a fire, and Margot going from ‘Concession-Stand Girl’ (Robert’s demeaning nickname for her) to final girl that couldn’t feel more forced. Worse, it seems to lean into the notion that much of the last-act brouhaha and feelings of compromised safety are actually her fault—a move that seems WTF at best. These elements should add context to the culture that’s produced these issues. Instead, it reduces everything to weak satirical tea and stock scary-movie beats. Toxic masculinity may be the beast within modern men, yet the attempt to give that a form in cinematic terms falls painfully flat.”

“they’ve given us a film that’s funny in places, horrifying in others and all but destined to be a reference point in future discussions about courtship … Ashford has done an admirable job of expanding the short story, adding a wild last act and fleshing out Margot’s world … If the movie’s sex scene reveals a man afraid of being laughed at, its daring third act confronts a different terror: men’s fear of being accused. Fogel takes that anxiety to outrageous extremes, putting Margot in real peril, but in the end Robert feels endangered too, and the casting of Braun (who’s less threatening than readers will have imagined) makes sense when the tables turn. The cultural conversation has evolved fast enough to give creeps pause and honorable men whiplash, and Cat Person will likely prove an important catalyst for further analysis. It’s a squirmy, uncomfortable movie no teenager wants to watch with their mom, but maybe everyone should—required viewing for freshman year.”

“I’m not a purist when it comes to adaptations; my general rule of thumb is that the more irreverent liberties a movie takes with its source material, the better. But there is nothing better about this Cat Person, which coarsens, flattens and torturously over-elaborates a story whose elegant concision was precisely what made it such rich and elastic interpretive fodder … All in all, you can’t fault the actors in Cat Person, least of all Jones, who’s entirely believable and empathetic here as a young woman who can be both cutting and vulnerable, cynical and naive … But you can easily fault some of Fogel and Ashford’s more bludgeoning storytelling choices, including the ways they’ve chosen to visualize their heroine’s active fantasy life … None of which is to suggest that Roupenian’s story is unfilmable, only that it hasn’t been well filmed. As hot properties go, the story has clearly been seized upon for its title recognition and viral cachet, but also with seemingly minimal consideration of why it cried out to be made into a movie—let alone the violent genre movie into which it abruptly swerves in its final act. Is this swerve meant to boost “Cat Person’s” commercial prospects in an industry where horror is one of the few genres that can still reliably turn a profit? Or to literalize the notion that, duh, relationships can be scary?”

“…the script from Michelle Ashford, tries too hard to be The Film We Need Right Now, aiming to check off every thinkpiece issue on her way to the bloody finale … The standout sequence is a horribly well-realised sex scene between the pair, uncomfortably raising questions of why we let things progress so far and how we reframe it in our head while it happens to us. It’s in these harder-to-discuss, knottier moments that the film briefly shows how a successful adaptation could have worked … Despite the notable flaws, I was mostly with the film until the short story’s ending played out, and if perhaps it had ended there a star might have been added. But instead the film lurches into ridiculous, full-blooded horror, turning the grounded suspense of the story literal. It’s a bafflingly silly misjudgment with any of that previous, far scarier, unease replaced with in-your-face violence. The not knowing, as many of us can attest to, is what truly haunts. Where did he go? What did I do? What did I not do? Will I ever really find out? The chillingly unanswered questions of the story are all given the most obvious answers imaginable and relatability is carelessly tossed aside, along with logic and investment.”

“…gone is the deceptively simple, resonant, viral New Yorker short story about the pitfalls of dating in the age of the internet that touched a cultural nerve in 2017, and in its place is a thriller so clownish and ridiculous that early on Isabella Rossellini delivers a dramatic monologue about how a male ant will die after it mates with the colony’s queen. It’s straight outta Death Becomes Her … a heretofore boring, unsubtle movie completely loses its marbles by attaching an inexplicable ending, which boasts as much universality, nuance and power as Taken 3 … Director Susanna Fogel is skilled with building the tension that a scary thriller necessitates. But the larger question is whether ‘Cat Person’ should have been turned into a cheapo thriller at all.”

“Fogel and Ashford tease out the latent horror in the story. The nightmares of dating, the fear of intimacy and the anxiety of trusting potential suitors become strange sounds, shadowy figures and visions of inescapable situations. It’s a liberating approach that the film gets close to nervously sabotaging. Like a helicopter parent with access to Find My Friends, Cat Person can’t help but keep checking in … Roupenian’s story is most interesting when it exercises restraint and a comfort with ambiguity. The violence of socialized gender roles feeds on gray areas and rejection. After Margot ends the dalliance in the story, Robert’s initial sadness morphs and calcifies into an unsavory rage. He texts her again, each message more aggressive than the last until the story ends with him calling Margot a whore. Cat Person effectively reproduces that scene and the ones leading up to it, but it doesn’t end there. A hair-raising third act adds an unusual coda—one that I, after only one viewing, am still processing. The relief, however, is in the filmmakers’ approach to these tense scenes: Fogel and Ashford loosen their grip, at last trusting us to sit in our discomfort, draw our own conclusions and sharpen our tools for the discourse.”

“…while Susanna Fogel’s feature film version of the story is appropriately excruciating (this is a high compliment; mostly, it will set your teeth on edge and raise the hairs on the back of your neck, just as it should), its muddled, messy, and brand-new final act feels at odds with Roupenian’s story and the very emotions it raised with its readers … Fans of the story will not be disappointed by the bulk of the film, which adheres closely to Roupenian’s text … nothing is as good as Margot talking to herself (literally) during an unnerving sex scene. It’s that entire sequence that most directly showcases the strengths of this adaptation. And while bringing a second Margot into the picture might sound like the easy way out, the best part is, it’s not. It’s the much harder way, the much more painful, the much more honest. The final word on ‘Cat Person’ the film? Not nearly as biting and perfectly pitched as the story that inspired it: It’s good…enough. It could have been more.”

“From the start, Cat Person is pleased with itself, telegraphing the obviousness of the broad, foreshadowing, and often patronizing supplemental material that the film adds, ruining almost anything that was interesting about its source material … It may rank among the most unnecessary and ridiculous endings I’ve ever seen. After steadily bastardizing everything nuanced and ambiguous about all those questions listed above—demeaning the audience with over-explanation about how we’re supposed to interpret events—that ending is the final dump in the litter box. But there are things about Cat Person that, at the start, really work. Braun and Jones are fantastic … There are several incredibly funny moments in the first act of the film, when there seems to be a tongue-in-cheek self-awareness about the short story and the deluge of discussion it caused. Far too quickly, though, that self-reference morphs into didactic explication … In Cat Person, the film, nothing is left to interpretation. It speeds past where Roupenian ended her story, transforming the narrative into a full-blown horror film/revenge fantasy; Promising Young Woman by way of Final Destination. It feels wholly inappropriate and crass, an exploitation of thorny, yet worthwhile talking points into slasher entertainment that unmoors whatever grounding the movie had and rocket-launches into the stratosphere of implausibility.”