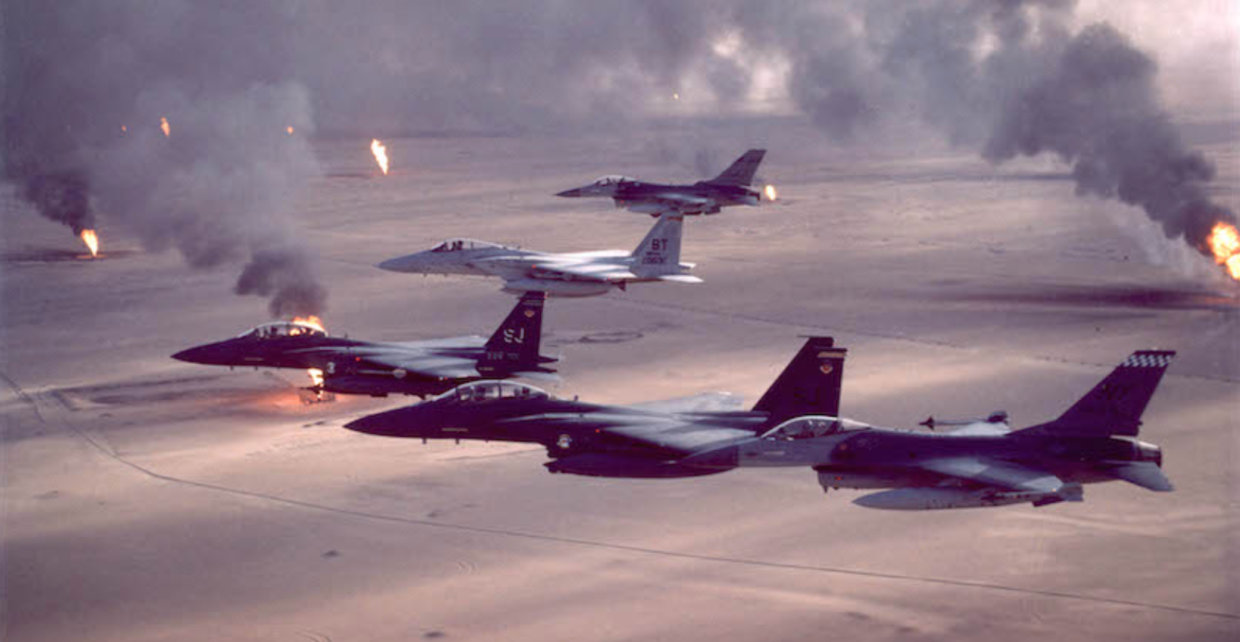 Thirty years ago, as “Gonna Make You Sweat (Everybody Dance Now)” by C+C Music Factory topped the American charts and Silence of the Lambs took Home Alone’s spot at the top of the box office, a U.S.-led coalition of 35 nations launched its defense of Kuwait—an operation codenamed Desert Shield to hammer home the message. This act of liberation, and the campaign known as Desert Storm that followed, would ultimately lead to the deaths of more than 100,000 people, most of them off-screen.

I didn’t have these facts at hand as I was writing, of course; I dug holes big enough to hold them and slotted the facts in later, when I had looked them up online—a place (sort of) where every fact and factoid (or some version of it) is available any time you want it.

In 1991, you had to tune in to Wolf Blitzer and Christiane Amanpour on CNN to know what was going on. Desert Storm was especially good for Ted Turner’s adolescent global news network. Millions tuned in for the bombing that began in January and continued into February with the invasion of Iraq, propelling ratings past the major networks for the first time and creating what has since become known as “the CNN effect.” A kind of 24/7 atrocity exhibition that went beyond merely reporting the war to actively curating it. French theorist Jean Baudrillard called it a virtual war, the coverage of it “hyperreal,” and published a series of three counterfactual essays in 1991: “The Gulf War will not take place,” “The Gulf War: is it really taking place?” and, once the war had ended, “The Gulf War did not take place.”

Here is how James Chapman describes it in his 1994 “television-war” novel, GLASS (pray the electrons back to sand):

The TV sound collected in drifts against my head. The man was talking about Iraq, Saddam, Iraq, United Nations, our president. I looked: little pig nose, smiling and smiling. The cartoon of a flag and an oil barrel appeared over his shoulder. Then a whole unfolding marble-coated floating blue word AMERICA opened out across his body, and a blood-color phrase over the weightless stone: Countdown To War.

Countdown to War is the kind of thing you got used to seeing on CNN in those days, as the media chased ratings and eyeballs. Gulf War television coverage, the filmmaker Ken Burns wrote at the time, felt cinematic and sensational, with “distracting theatrics” and “pounding new theme music,” as if “the war itself might be a wholly owned subsidiary of television.” Indeed, CNN became a little fiefdom of its own in Iraq. When aerial bombardment destroyed the existing communications networks, Turner paid to install his own infrastructure, a “separate system to send audio feeds from the Al Rasheed Hotel to CNN’s center in Jordan and then back to Atlanta by satellite feeds.” And though the title of the novel may sound like a purloined Dada bit, it actually comes from a column published in Air Force Magazine by former Harper’s editor Fred Reed: “We could nuke Baghdad into glass, wipe it with Windex, tie fatback to our feet and go skating.”

Chapman doesn’t just embrace all of life’s heartbreaking vulgarity; he brings it in close for a tender kiss.

In GLASS, Chapman literalizes the metaphor. His narrator is a drunk named VJ who, when he’s not drinking or fighting with his wife, repairs TVs at a superstore where he can show up disheveled because “you work there all day and nobody sees you.” Following another bender and yet another fight, he finds himself getting his head buzzed at the local strip mall. When the barber asks if he’s joining the military—the joke, of course, is that the buzz cut is free when you enlist—VJ decides that he might as well. Now things begin to really blur; the reader realizes they’re watching a kind of screen, too. We watch as the reckless barfly of “Private” becomes the nameless grunt of “Clear Channel,” a standard-issue TV at the foot of his bunk haunting his dreams. The narrative, now no longer tethered to its protagonist, comes to roam freely in “Air War,” before concluding with VJ in Iraq, a bitter radioman and witness, above all, who says things like: “We’re fighting to find out who has to change, and who gets to stay the same.”

Chapman doesn’t just embrace all of life’s heartbreaking vulgarity; he brings it in close for a tender kiss. Like the best American folk art, his writing is deliberately crafted—roughhewn in its elegance, even—yet abounding in moments of untutored eloquence and unstudied grace. In Glass, this entails borrowing heavily from the televisual. At one point, someone sizes up a room by saying: “Giant monsters could run around in here and have space to throw cars at each other.”

Chapman doesn’t shy away from the details, either. He depicts the effects of white phosphorous, the texture of boredom, the inexperience of the enemy conscripts, and the so-called collateral damage, the civilian casualties that occurred off-screen, while Wolf Blitzer took a break to bring us a message from his sponsors:

Here, this man over here, he was walking a road, he “found” a mine.

This was riding her bicycle to work, she ran over an anti-tank round.

I spent this tricennial revisiting Chapman’s novel, peering down at tiny pixelated thises and thats through General Schwarzkopf’s electronic eyes, caught between feeling that everything had somehow changed in the intervening years and feeling that not much had changed at all—between nostalgia and cynicism. It reminded me of something Walter Serner, an early member of the Dada movement, wrote around the time of the First World War: “The world is boring, a fact as undeniable as it is unfathomable. Since no one can bear boredom, people are easily enthralled by spectacle, and for that reason are ever so ready to head off to war.”

Cultural amnesia accompanies imperial decline. We recall the exalted helicopters of Apocalypse Now rather than the searching conscience of Stephen Wright’s Vietnam homecoming novel Meditations in Green. We remember Larry Beinhard’s 1993 novel Wag the Dog, probably because they made a star-studded movie out of it, but Chapman’s novel is, like much of his work, unclassifiable and—I feel obligated to use the cliché here—underappreciated.

Physical copies of Glass aren’t easy to find. It was published by Fugue State Press, the small New York house Chapman founded in 1992, which, besides a wonderfully obscure novella by André Malraux (The Kingdom of Farfelu), also put out perhaps his best work: the 2006 novel Stet, loosely based on the life of Soviet filmmaker Sergei Parajanov. Chapman’s ideal novel strives simply to contain its contents. The novel, he has said, is a “vast impractical experiment where you to try to create a whole meaningful universe,” a grand work, like opera, “in which everything is said.”

The imagination is a powerful thing. That’s something even the least sympathetic reader shares with VJ: all of us are empowered and limited by the extent of our imaginations. I am a few years younger than CNN. In 1990, I was only dimly aware of the war as something happening on TV, in the background of my life. (The subsequent wars in Iraq and Afghanistan, which we are still fighting, spring more readily to mind.) I don’t remember our president, the first George Bush, saying that our troops would “not be asked to fight with one hand tied behind their back.” I don’t recall the Patriot missiles lighting up the neon skyline or the column of tanks rolling—they were always said to be rolling, for some reason—into Iraq. The burning oil drums I’m sure I didn’t see until I was much older, when it had already become part of history.

Some of my friends, though, happened to be USAF brats whose fathers and mothers were deployed abroad. One of them later traded me a souvenir t-shirt, which I still keep neatly folded in a drawer, as a memento of that time. Someday I imagine somebody will say no, it’s impossible, that never happened, and I will open the drawer and pull out the cheap shirt with the faded lettering that reads NUKE IRAQ [Nike symbol] JUST DO IT.

Daniel Elkind is a writer and critic based in San Francisco. His work has appeared in the Los Angeles Review of Books, Public Domain Review, Quartz, and elsewhere.

Writing About Housing Anxiety in the Contemporary Novel 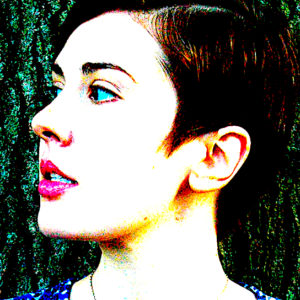 Our fingertips are among the most sensitive parts of our bodies. Bristling with nerve endings, they are in constant communication...
© LitHub
Back to top