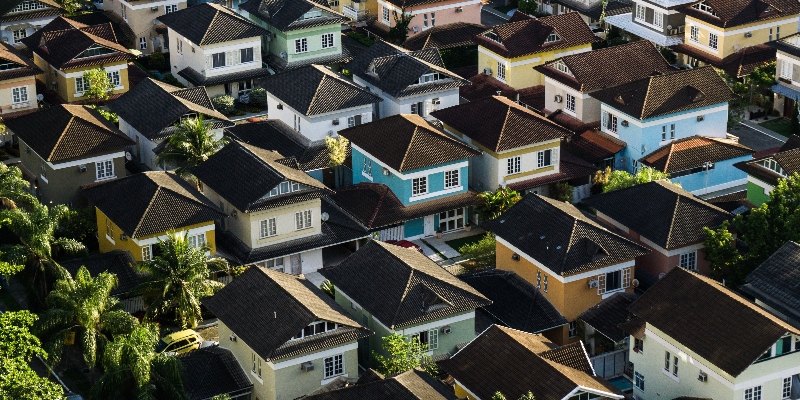 Writing About Housing Anxiety in the Contemporary Novel

I’d like to moon around a garden barefoot
and rosy, instead I wake with night sweats I dedicate to my
landlord
–Helen Charman, “The Tenancy”
*

It’s curious how often the anxieties of tenancy fail to feature in fiction. Housing (and the social and political conditions of acquiring it) is so often observed through a lens of privilege, or not observed at all—as if explaining, even in passing, how a character acquired the wealth to rent a one-bedroom apartment in a capital city were unnecessary or gauche. But this omission is not the case in Megan Hunter’s novel The Harpy, in which Lucy anxiously considers her tenancy like this: “In this house, I belonged, if only for a fixed term. Wasn’t life temporary, anyway, I asked myself; wasn’t permanence a fantasy?”

Permanence as fantasy—and impermanence as horror—is something that runs dark through The Harpy, which follows Lucy and her husband, Jake, in the aftermath of his infidelity to her. An agreement is reached: Lucy will hurt Jake back—three times. Their rented house, where they live with their two children, begins to expose Lucy’s anxieties: the impermanence of her marriage; the failures of her motherhood.

But what makes Hunter’s novel so striking is its refusal to limit the house to metaphor: the material conditions of Lucy’s tenancy—her financial and emotional precarity, social status, acts of physical labor—course through the narrative. Housing, then, is the origin of Lucy’s anxiety as well as its expression, and she feels this intimacy keenly: it’s this corrosive shame that binds the novel together. “The house,” she confesses, “saw me as I was.” It gives form to, and forms, her anxiety; it feeds it.

Who can afford (or is afforded) a home, a sense of permanence? The question has long lingered at the fringes of contemporary fiction, usually from the vantage point of wealth: in Sally Rooney’s Conversations with Friends, Frances lives in her uncle’s Dublin apartment rent-free; the unnamed protagonist of Ottessa Moshfegh’s My Year of Rest and Relaxation lives in an Upper West Side apartment paid for by her inheritance. Rent, for these characters, is not a source of anxiety. The psychological and financial implications of paying for housing are not a worry; the characters’ concerns—and the major plot points of these novels—lie elsewhere.

These forms of tenancy point to the glaring absence of others. Across the globe, more than 70 percent of the population live in countries with a widening wealth gap, and the gap between the average incomes of people living in high and low-income countries has doubled since 1990. These rising inequalities benefit the wealthiest, and particularly where it concerns housing: as a product of the UK’s decades-long housing crisis, 8.4 million people live in unaffordable or insecure homes—precarity only intensified by the surge of the unregulated private rental market. Considering the social, economic, and political contours of our current climate, neglecting to depict the anxieties of tenancy in favor of depicting those who profit seems worth interrogating.

It’s in this context of unaffordable home ownership, and a flourishing rental market, that The Harpy takes place. In the UK, one in three millennials are expected to never own a property, while the number of households in the private rental sector increased from 2.8 million in 2007 to 4.5 million in 2017—an increase of 63 percent. A mortgage for Lucy and Jake is unattainable in this context: “Jake’s career progression had been modest, mine had been in reverse, and meanwhile the prices in our area had risen quickly, silently, like mould along the inside of a neglected jar,” Lucy says. The only people able to buy in their area are “bankers, corporate lawyers, high-level employees of multinational pharmaceutical companies.”

Despite Lucy’s glib exterior—wasn’t life temporary, anyway, I asked myself; wasn’t permanence a fantasy?—she grapples, anyway, with this cultural conflation of home ownership with satisfaction, and tenancy with failure. “I couldn’t help but want it: a mirage of safety, the pretense that four walls could keep your life.” Jake’s affair with Vanessa probes her anxieties not only about her marriage, but about her status as a tenant instead of a homeowner—as if it were somehow a marker of her character, or had ascribed to her a certain moral value. “When Vanessa had complimented the house,” Lucy remembers, “I had rushed to clarify, red-faced, holding a plate of mince pies: It’s only rented. Not ours. I wish!”

Who can afford (or is afforded) a home, a sense of permanence?

It’s this deep shame—the need to correct an assumption about middle class financial status, the desperation to avoid future social embarrassment or exposure—that reverberates throughout the novel. Joy wilts under its intensity, as Lucy is plagued by her own unruly emotions—jealousy, frustration, dissatisfaction—fixated on what her tenancy signals about her. The Harpy’s power lies in its depiction of tenancy as a deeply consuming concoction of emotion, subject to a range of social, cultural, and financial pressures.

Housing anxiety is presented differently in Daisy Johnson’s dark and compelling second novel, Sisters: while the owner of the property in The Harpy never appears, she flickers into view in Johnson’s novel, as the protagonists’ relative. Sisters follows July and September, and their mother, Sheela, as they move—desperate for a fresh start after an incident with school bullying—to stay for a period of time at their aunt Ursa’s house in the North York moors. The house is dilapidated: there is a “dirty tiled floor, chipped where it meets the damp wall”; a window has been “painted shut, nails forced into the soft wood”; July notes that “even the water feels coated, soft with slime.” Perhaps the house is this way because Ursa doesn’t live there: she rents it out, July explains, “fills it with people like us who do not know where else to go.”

Of course, July’s conflation of her family with Ursa’s tenants overlooks crucial factors of financial, and family, circumstance: July, September, and Sheela ordinarily live in their house in Oxford; this stay at Ursa’s house is impermanent, made available to them because of family connection—it’s unclear whether or not they are paying Ursa for this visit. It’s July and September’s late father, Peter, who told Ursa that the house would likely not turn a profit if she sold it: better, perhaps, to rent it out to tenants—people who do not know where else to go. These tenants are absent when July, September, and Sheela arrive. “I think,” September tells July, “she turfed them out so we could stay.” Perhaps Ursa is an unsympathetic landlady. Perhaps she is the type to neglect repairs, allow her tenants to live in unsafe conditions, forgo the clauses of a tenancy agreement. Perhaps she is the type to evict her tenants from the property at short notice.

Where Sisters and The Harpy converge is in their assertion that tenancy can be a state of haunting: the houses in these narratives are anthropomorphic, plagued by the presence of previous tenants, sensitive to their inhabitants’ anxious interiority. “There are signs,” July thinks, “of someone here and not long ago: a sliver of soap on the scummy sink, a couple of shampoo bottles dropped into the bath, a smudge of what might be make-up on the floor.” Johnson is an expert at conjuring a sense of unease in domestic space: the anthropomorphic or uncanny house features in her short fiction (most notably in the excellent “A Bruise the Size and Shape of a Door Handle”) as well as her first novel, Everything Under—and her writing in Sisters is no different. The novel reckons with the ghostly residues of tenancy—a sliver of soap, a marked floor—and the house shimmers with this evidence; a haunting sense of absent history generated by precarious and unstable housing.

In the house, family memory and tenants’ histories brush against each other—an uncomfortable chorus that draws attention to the multiple discomforts of privilege and others’ comparative lack.

This sense of haunting is unsurprising, maybe, given its reflection of the UK’s culture of temporary tenancy: at the end of 2017, a report found 62 percent of households in the private rental sector had spent under three years in the same accommodation; only 4 percent stayed in the same house for 20 years or longer. In the house, family memory and tenants’ histories brush against each other—an uncomfortable chorus that draws attention to the multiple discomforts of privilege and others’ comparative lack; a haunting on multiple levels. Rooms have, as July notes, the chilling “feeling of having been busy moments before.” She is alerted to the presence of others: the tenants who did not have the privilege of stability.

Horror genre conventions of space and memory take root in The Harpy’s depiction of tenancy, too. Like the house in Sisters, Lucy’s childhood home carries the ghostly residues of other tenants: her name, once scratched on the wall, is painted over; “I could feel the people who had been here after us, shifting traces of their unknown lives.” Lucy’s own house is “a surface that had absorbed so many years of my life, my being soaked into its walls like smoke.” She imagines the house “winking,” “its windows so obviously eyes, the closed, discreet straightness of its back-door mouth”; it speaks to her, too, a pained echo of her anxiety—what are you doing? It’s as if the house, too, mocks her attachment to it. Her affection becomes a humiliation and not a comfort: “it had been wrong, I saw now, to get attached to this place, just a building, one I didn’t even own.” Her experience of tenancy as intimacy is troubled by her fixation on its impermanence: haunted by the knowledge of her fixed term contract, intimate attachment feels wrong-footed, even foolish.

What—or who—grants us a sense of belonging? A fixed term or a rolling basis; an attentive landlord, or an absent one? Wasn’t permanence a fantasy? The Harpy is haunted by these questions: it brushes uncomfortably against the economic climate that has made these questions necessary.

Both The Harpy and Sisters problematize and interrogate the definitions of home for tenants—while pointing, either explicitly or implicitly, to the social, economic and political contexts responsible for this precarity. From different angles, Hunter and Johnson conjure dark, radiant narratives of shame and grief that grapple with a culture of precarious housing and its psychological implications. Haunted by previous tenants, the unintuitive contours of the house, or a pervasive sense of dread, Hunter and Johnson’s protagonists are bound by this anxiety—as if they share, in July’s words, a single heart beating “a doubling, feverish pulse.”

In our current climate of insecure and unaffordable housing, this anxiety has no solution. For Lucy in particular, the lack of closure lingers indefinitely—she doesn’t have the luxury of visualizing an endpoint to her worry. The house gives form to—and forms—her anxiety; with no attainable resolution, she dwells there, uneasy.

Laura Maw is a writer of essays and criticism, and her work on horror in film, art and culture has been published in the New Statesman, Hazlitt, Electric Literature, and Catapult, among others

The Struggle to Define Wilderness: On Encountering John Muir in Bear Country 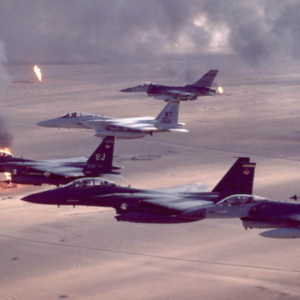 Thirty years ago, as “Gonna Make You Sweat (Everybody Dance Now)” by C+C Music Factory topped the American charts and Silence...
© LitHub
Back to top