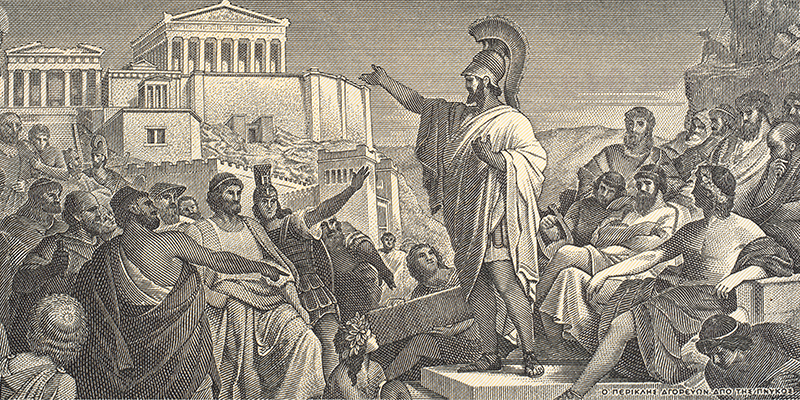 via Library of America

The Evolution of the Political Lie: David Bromwich on Hannah Arendt and Complicity

“Are lies then a latent hazard, or are they a usual condition of democracy itself?”

“Truthfulness has never been counted among the political virtues,” Hannah Arendt asserts near the start of “Lying in Politics”; and she makes the same statement in almost the same words at the outset of “Truth and Politics.” Lies, she adds, while never morally admirable, may be politically justifiable.

This is an unsettling premise for the major essays Arendt would devote to the importance of truth in a free society. Her acceptance, however, of the fact that politicians lie comes from her understanding of the nature of a polity. Whether it takes the form of monarchy, oligarchy, or democracy, a polity is a regime in which people can live unmolested; and the typical activities of men and women are not mainly political, except at rare critical times in a democracy.

A political lie, for Arendt, may therefore be justified, depending on the collective good it secures, since the largest duty of the leader or state official is simply to ensure the continuance of the society. But in a constitutional democracy, honest disclosure matters more than it does elsewhere. Here it is the self-understanding of the people that sustains the government.

And as we enter the third decade of the twenty-first century—when the legitimacy of elections is widely challenged in America, on the basis of rumor, fantasy, and half-digested fact—we are living through one of those periods when conscientious record-keeping and the correction of error are both necessary and momentous. In the face of systematically deceptive leaders, democratic truth-telling shows a kind of integrity that does political work. It removes the stain and may restore the dignity of politics.

A political lie, for Arendt, may therefore be justified, depending on the collective good it secures, since the largest duty of the leader or state official is simply to ensure the continuance of the society.

Arendt came to the attention of a wide public with the appearance in 1951 of The Origins of Totalitarianism. Totalitarian communism and Nazism alike were engendered by ideologists and cemented by the masses who went along with them. The governments and their compliant citizens acted from chosen facts or fictions about the world, and often a mystifying compound of fact and fiction.

A salient feature of totalitarianism, as Arendt defined it, is the constant threat and frequent exercise of state power against foreign enemies but also “enemies of the state” within the society itself. The state, greatly expanded by a mesh of economic, cultural and police bureaucracies, makes its presence felt with a certainty and intensity sufficient to burn away most traces and even memories of an older way of life.

Totalitarian systems negate the very idea of a person. Russia under Stalin and Germany under Hitler in this sense embodied “radical evil”—leaving no space for the doubt, mixed feelings, and questions that are part and parcel of individual identity. The probable lifespan of a totalitarian system, it seemed to Arendt in 1951, was impossible to estimate, but there was clearly no outer limit.

Eichmann in Jersusalem: A Report on the Banality of Evil, published in 1963, marked a second statement and, to some extent, a revision of Arendt’s view of totalitarianism. Adolf Eichmann was the high-ranking Nazi official who had arranged the procedures for transporting the Jews of Europe to the Nazi death camps. He was captured in 1960, in Argentina, by Israeli agents, and stood trial in Israel the following year for crimes against the Jewish people and crimes against humanity. Two aspects of Arendt’s report on the trial were immediately noticeable to a close observer of her thinking.

She had given up the thesis of radical evil: Eichmann, in court, had surprised her by his utterly commonplace nature, his addiction to cliché and apparent lack of zeal, indeed by a depthless ordinariness—which accounted for her use of the provocative word banality.

Totalitarian systems negate the very idea of a person. Russia under Stalin and Germany under Hitler in this sense embodied “radical evil.”

On the other hand, his demeanor confirmed her view of the passive and morally unjudging creatures that were the offspring of mass society generally. Not only those who obeyed but those who helped to invent and facilitate an evil as great as the mind could conceive might themselves be unremarkable. Far from the monsters in human form that fantasy likes to conjure up, they were conformists, careerists, hollow executors of a policy they could not think to question. (They might, of course, also have been enthusiasts, while the going was good.)

On this analysis, the most formidable administrators of Nazi and Soviet communist terror resembled their counterparts in luckier societies whose ability to judge an evil system was never tested. Arendt’s dry portrait of Eichmann was pitched outside the form of intellectual drama many of her readers would have expected; and in writing of the destruction of the European Jews, she offered a frank discussion of the policy of the Jewish councils.

For the councils themselves had cooperated with Nazi authorities and thus ensured the peaceful dispossession and deportation of their religious community. This part of her account was felt by many to be lacking in sympathy for the predicament of the councils; and the consequent attacks on Arendt, especially by American Jewish organizations, prompted her to reflect on the imperviousness of a group or a society faced with unpleasant truths.

Are lies then a latent hazard, or are they a usual condition of democracy itself? Lies to the people, the political theorist Uday Mehta has said in expounding Arendt, “become the warrant for other lies.” The people want to be flattered; their leaders tell them what they want to hear—that is one cause of lying. But “where security and the unity of political society are foundational values, lies, like violence, always have a conditional justification” because “there is always some future eventuality with respect to which a lie can be politically justified.” Lies claim permission within the ethic of responsibility about which Max Weber wrote in “Politics as a Vocation.” If I am a political leader, I give the law not to myself but on behalf of others, with whatever fiction I require as the elected or appointed guardian of their security.

From the mid-1960s onward, Arendt’s interest in the cooperation of democracy with lying was sharpened by the recurrent exposure of false claims of progress by American armed forces in the Vietnam War. These embarrassments reached their climax with the publication in March 1971 of the Pentagon Papers: a trove of classified documents, copied by a Rand Corporation scholar, Daniel Ellsberg, that revealed a decade-long pattern of lies by the Johnson and Nixon administrations.

How much deception can we accommodate before we lose our self-understanding as responsible citizens? How do the lies change us?

This war—so the public had been told—was fought to prevent a communist takeover of Southeast Asia; and the official justifications often referred to the “domino theory”: if one country went communist, all the others would follow. It emerged, however, from a reading of the Pentagon Papers that the foreign policy advisers under Johnson and Nixon, and going back as far as Kennedy and Eisenhower, had never given credence to the domino theory. Rather, the United States was in Vietnam—and was destroying the agricultural livelihood of the country even as it killed more than a million Vietnamese—largely in order to contain China.

Yet the war went on, with false hopes of victory regularly conveyed, because getting out would mean a loss of face. The serial projections of success eventually became so penetrable that a euphemism was taken up by the mass media. The pattern was called the “credibility gap.” The scandal of the Pentagon Papers was the proof they offered that the untruths emanating from government had been consciously fashioned.

The twin concerns outlined above—the manufacture of lies both under a totalitarian regime and in the apparently free public life of a corrupted democracy—may be seen to come together in “Truth and Politics” (1967) and “Lying in Politics” (1971). How much deception can we accommodate before we lose our self-understanding as responsible citizens? How do the lies change us? There is a tendency in all experience to make the strange somehow familiar, to normalize the abnormal. By this trick of the mind, state policies that were previously unthinkable can be rendered almost habitual.

The expectation of privacy, for example—the confidence that there are a great many things about me that are known only if I want others to know them—is incomparably weaker now than it was for an American in 1950 or even 2000. The truth seems to be that our sociable instincts can enlist us as sudden collaborators in a revolutionary change.

Since we have to coexist with our neighbors, it goes against the grain to suppose that the approved actions they agree to take are wrong; we may excuse a transgression that in ordinary circumstances we would find abhorrent; and eventually, we go along ourselves. If so many are doing it, how can it be very wrong? Arendt in her essays on lying suggests that this drift of behavior, multiplied many times in the conditions of modern democracy, can impair and finally destroy people’s common sense of reality itself. 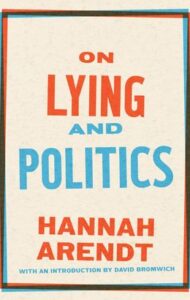 Excerpted from David Bromwich’s introduction to On Lying and Politics by Hannah Arendt,
with permission from the Library of America

David Bromwich is Sterling Professor of English at Yale University. His books include Hazlitt: The Mind of a Critic, Disowned by Memory: Wordsworth’s Poetry of the 1790s, The Intellectual Career of Edmund Burke, and, most recently, American Breakdown: The Trump Years and How They Befell Us. His collection of essays on modern poetry, Skeptical Music, won the PEN/Diamonstein-Spielvogel Award for the Art of the Essay in 2002. His articles on contemporary politics, the war on terror, and the fate of civil liberties in the United States have appeared in Dissent, The Nation, HuffPost, The New York Review of Books, antiwar.com, TomDispatch, Mondoweiss, Guernica, and the London Review of Books.

Back to School for Everyone: Place, Space, and Landscape with Alexandra Kleeman 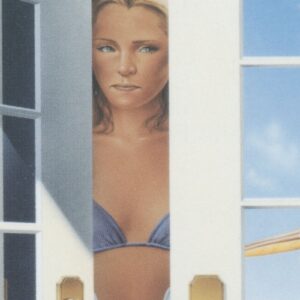 Back to School for Everyone: Place, Space, and Landscape with Alexandra Kleeman

When I began writing my second novel, Something New Under the Sun, I felt for the first time the thrill and intimidation...
© LitHub
Back to top
Loading Comments...