This is how it began, and how it would end, on the long pale strand of a Lincolnshire beach in the last hour of sun, the daylight moon small as a kite in the sky. Far below, a child of three was playing by herself with a new tin spade. It was still strangely warm in that autumn of 1929, and she had taken off her plimsolls to feel the day’s heat lingering in the sand beneath her feet. Short fair hair, no coat, blue eyes and dress to match: that was the description later given to the police.

She had come out of the house that afternoon and along the short path to the beach with her mother, Mrs. Veda Elston. They had already been there for some time, with biscuits in an old tartan tin, digging and sieving the sand. The tide was receding when they arrived, the concussion of waves on the shore gradually quieting as the day wore on; by now the sea was almost half a mile in the distance. In this lull, on their own familiar beach, and so comfortingly close to home, Veda must have let her daughter wander free for a moment. For she did not see what happened next.

Someone moved swiftly across the beach and began talking to the little girl. Someone she perhaps knew, because no sounds were heard as they coaxed her away. One minute she was there, barefoot and absorbed, spade in hand; seconds later she was taken off the sands at the village of Chapel St. Leonards, apparently without anybody noticing at all. Thus was my mother kidnapped.

I see the scene again and again, always trying to grasp the unfathomable moment in which she vanished and everything changed. The place where she was playing empties into air; the tide freezes; the beach turns blank. Time stands still on the shore. How many minutes before her absence begins to register, before Veda becomes uneasy and then fearful, before the silence is broken by shouting and rushing to the spot where the spade lies fallen? The waves continue their impervious lapping, gulls drifting on the surface as the afternoon fades. How long before anybody missed my mother?

I have the police report of that day. It is scant. Mrs. Elston takes her daughter to the beach at or around 2:30 pm. Approximately two hours later, the child disappears so fast that she couldn’t have got anywhere near the water. Unable to find her on the sands, Mrs. Elston retraces their steps, searching the path and even the house in case she might have found her way home. Neighbors help look for the child. An urgent telegram is sent to the father, who is away for work, summoning him back to Chapel.

All of this is duly reported to the police, but not until the following day; and not, I suspect, by Veda. I hear instead the brusque authority of my grandfather George. Veda appears silent with shock. All she offers, via her husband, is the possibility that the child must have wandered up the beach behind her and out of sight. She herself was sitting on a blanket, knitting or staring dreamily out to sea in the mild afternoon sun, as I imagine it, with one eye on the child, occasionally plying her with biscuits—until she just slipped out of view.

Perhaps the crisis was not immediately apparent. After all, the beach at Chapel was so innocent, like the child, and her little legs could not have carried her far. But then came darkness with no trace, and more stricken searching, before Veda had to spend the first dreadful night alone without her daughter.

How could she have disappeared? The beach, to begin with, is completely flat. A broad street of spotless sand, scattered with angelwing shells, it seems to stretch forever in both directions. There are no coves, dunes, or rocks where an adult could hide a child; everything stands in open view.

To reach it you must walk up and over an artificial incline of heaped sand that is supposed to act as a barrier to the sea; a barrier so ineffectual that houses, cattle, and villagers have been swept away in historic storms. This little embankment runs for miles along the coastline, and from its top people can be seen walking far away in the distance. Tennyson, the Victorian poet born and raised not far from Chapel, was drawn back to it all through his life. “I used to stand on this sand-built ridge,” he wrote in old age, “and think it was the spine-bone of the world!”

The waves continue their impervious lapping, gulls drifting on the surface as the afternoon fades. How long before anybody missed my mother?

Come over this ridge, and even more surprising than the flatness is the way the sand appears to merge with the sea. The beach is tawny brown and so is the brine, because it washes over beds of clay. On a still day they become one vast continuous expanse, an optical illusion only dispelled when a chink of reflected blue sky spangles the water or a sudden gust troubles the surface.

Perhaps that stillness slowed the events of the day. Veda did not notice what was happening quickly enough. Nobody scrambled up that ridge in time to spot any hurriedly departing figures. Footsteps muffled by the sand, voices dispersed on the mellow sea air, all it took was a prolonged moment of parental inattention. No commotion. Nobody saw, and perhaps there were few other people there to witness the incident, for it was a weekday afternoon in October.

Nor was this yet a crowded beach as it is today in high season. Black-and-white photographs from the 1920s show deserted sands or very occasional hikers in hobnail boots and straw hats buying tea from a hut by the Pulley, as they still call the narrow passage where horses once pulled cargoes of tobacco and paraffin over the ridge into the village.

The beach was always Chapel’s livelihood. Boats went out for whiting, people searched for mussels and shrimped in the waves at low tide. Ships sometimes ran aground, stalled in the shallows, their debris washing fruitfully ashore. There might be wood for the fire, treasurable in those days before electricity; and on Sundays people took bags and went coaling. Stranger things turned up too.

A ship running guns lost its dangerous cargo at Chapel and soldiers had to be brought in to handle the live ammunition. A case of glassware was shared out among the villagers, not a single piece shattered. And once a crate of grapefruit spilled out across the sands, odd yellow globes never seen before by anyone except Mr. Stow, proprietor of Stow’s Stores by the Pulley; where in the world had they come from?

All along the sea’s margin, curds of delicate foam arrive on incoming waves. My mother used to hurl them gleefully about, risking her father’s instant reproach. In winter, sea-driven winds direct from Scandinavia skim sand into the air, stinging the eyes and gritting the mouth. There are spring tides when the water feels warmer than the gray rain spattering its surface, and blazing summer days when you can swim forever, it feels, along the unchanging shore.

This level strand, with its inviting sea, was the great playground of my mother’s youth. She went there with George, paddling in the shallow froth, clambering about the tide pools, digging holes, drawing in the sand. He took photographs of her with his Box Brownie, and even in those monochrome days they show the beach at Chapel exactly as I knew it too, from the holidays of my own childhood.

Photography gives us memories we hardly knew we had: the house where we were born, our infant selves, the embarrassing clothes we once wore. But the camera is also capable of giving us memories we cannot actually have because we were not there in the first place. This rare gift, this strange illusion of déjà vu, characterizes all of George’s pictures for me. He photographs his daughter on the shore, laughing in a swimming costume I remember as pale lilac, embroidered with a butterfly, though of course I neither saw nor wore it.

She sits in front of a bell tent with a kettle brewing on a portable stove, its meager flame the result of the purple methylated spirits that fueled it, and I scent that sharp stinging reek. There is a picture of her beaming at the bottom of a gigantic hole which I know George has been excavating all day, the sand damper and colder the deeper he digs into the secret innards of the beach. She is carefully seated inside, in clean clothes for the camera. I am with her, smile pinned to my face too, waiting to be lifted back out.

Every beach shot is ecstatic, and almost proverbial: my mother looks happy as a clam. Years of happiness, or so it seems, on Chapel Sands. I particularly love the sight of her perched on the shoulders of a sun-browned man who bears his load with patient resignation. 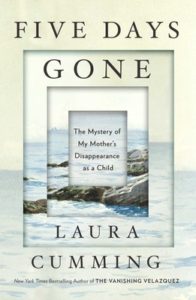 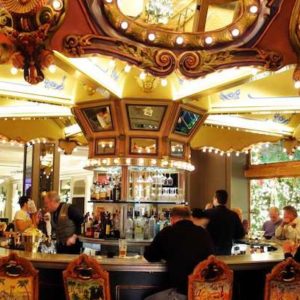 To celebrate our partnership with Kimpton, enjoy 20% off their Best Available Rate. Cozy up in your hotel room with one of our seasonal...
© LitHub
Back to top
Loading Comments...