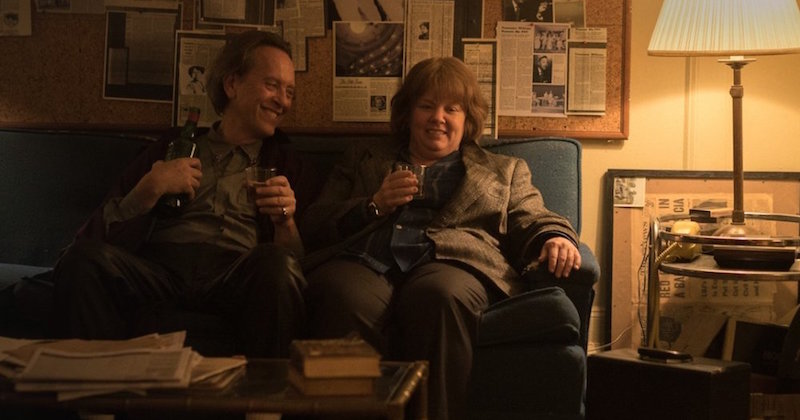 The Crucial Role of the Sidekick in Can You Ever Forgive Me?

Memoirs can seem uniquely uncinematic while also being perfectly suited to film. It’s a strange paradox, but here we go: the reason a memoir gets written is because the story itself is good, is interesting, but the very nature of the genre means that the story is funneled through a narrow experience. (Consider the narrative leaps Spike Lee took to make Ron Stallworth’s good story, Black Klansman, into a good movie, BlacKkKlansman.)

Lee Israel (who died in 2014) published her memoir, Can You Ever Forgive Me?, in 2008. A professional biographer, Israel fell on hard times in the 1990s. A book failed, and she had to turn to dreaded freelancing. To get herself out of financial destitution, she turned to literary forgery, manufacturing letters by famous people (Dorothy Parker, Louise Brooks, Noël Coward, and Lillian Hellman, primarily) and selling them for high prices. Eventually, her crimes became bolder: she would steal real letters from archives, leaving behind forged replacements to cover her tracks. Israel’s memoir is sly and funny, exploring how easy it is to dupe a literary world hungry for any nibble of celebrity, more interested in the appearance of authenticity than in authenticity itself.

It’s also a myopic view of this world. Israel’s subject is ultimately herself, explaining and justifying her criminal activities. “I had had no experience failing,” she writes, but soon she finds herself surviving freelance assignment to freelance assignment, living on and off welfare in a dirty Manhattan apartment where she sleeps on a mattress on the floor. (In 2019, many struggling New York writers may read that and think, “Wait, she had a mattress? Luxury!”) Forgery, as she sees it, is her only way out—and the only way she still gets to still be a biographer, even sort of.

In the film (adapted by Nicole Holfcener and Jeff Whitty, directed by Marielle Heller), Israel cannot be so myopic in her thinking. She’s played by Melissa McCarthy, one of our most gifted comic performers—and like all good comic performers, she needs foils. (Those who doubt McCarthy’s dramatic chops need look no further than the Saturday Night Live sketch in which she plays Barb Kelner, a woman whose attempts to start a company in which she eats leftover pizza wring surprising pathos from the studio audience.) So the most important question of the film Can You Ever Forgive Me? becomes how to broaden out Israel’s focus. If all she’s doing is explaining, then what is there to show?

In 2019, many struggling New York writers may read that and think, “Wait, she had a mattress? Luxury!”

As with BlacKkKlansman, in which Lee elevated a relatively minor character from the memoir into the Adam-Driver-played co-lead of the film, the writers of Can You Ever Forgive Me? understand the importance of a good sidekick. Hence, Jack Hock, played by Richard E. Grant like he’s in a sequel to Withnail and I, reprising his cult-classic character as though, after failing as an alcoholic actor, he then failed as alcoholic literary scenester. The casting of Grant (a great and underrated actor) is key: Hock is portrayed as a man who is just kind of around, and Grant served a similar purpose in American movies throughout the 90s (like The Player and L.A. Story and many others)—the token British guy who popped up in otherwise un-British situations.

In her memoir, Israel makes use of Hock in about two chapters, toward the end of the book; he’s less a co-accomplice than a pawn. Briefly mentioned early on as an old drinking buddy of Israel’s (“whom I had kissed off several years previously”), she then taps him when the heat is on and she needs to offload a bunch of illegal letters without showing her face. He’s gone from the narrative quickly after giving her up to the FBI, and she kisses him off, once again, cruelly: “Sonofabitch Jack had been worked over by aggrieved tricks who’d blackened his eyes and broken his nose and kicked away his old teeth. But he was afraid of my mouth.”

In the film, however, Hock’s arc is just as important as Israel’s. He starts the film as a charming presence, a scamster who can convince people he’s worth knowing even though he’s done nothing. The film centers on the relationship between him and Israel. They become reacquainted randomly in a bar, where they’re both drinking away their afternoons. They bond over an act of petty revenge on a bookstore clerk who refused to buy some of Israel’s used volumes (an act of petty revenge which, in the book, Israel performs solo). (Also worth noting—if you’ll forgive back-to-back parentheticals, the memoir makes clear that the bookstore in question is The Strand, whereas the film makes it a generic used bookstore—unless it is The Strand, and this fact is obvious to people who have lived in New York far longer than I have, and I’m just a fool. At the very least, there are no exterior establishing shots of The Strand, that New York landmark, in the film, which makes the bookselling rudeness seem less a matter of a specific location and more a matter of the general industry tenor. God, between this and the inexplicable Netflix show You, do booksellers need to get together and lobby for positive portrayal in media?)

This is the memoir as career rehabilitation—as pitch.

By the end of the film, Hock has contracted AIDS (he’s already dying when he shows up in the memoir), and he has found some small redemption in his wayward life through his friendship with Israel—as has she through her friendship with him. It’s a sweet and meaningful cinematic relationship, whereas its literary analog is merely a function of business, and quick.

Israel’s need powers this narrative in both forms of media. In the film, she has the need for human contact above all—not only in her friendship with Hock, but also her halting almost-romance with one of her “victims,” a woman who buys rare letters at a bookstore. You watch Israel’s humiliation at a party when her agent tries to ignore her. You sit at the bar with her. You watch her attempts to connect and grimace when it goes wrong. But you understand and recognize what she’s after. And when she forges the letters, she seems to be getting in deep with her subjects, like any good biographer—not in an attempt to exploit them, but in an attempt to understand them, to connect with them.

The Israel of the memoir comes across differently. The loneliness of her life is suggested, not embodied (film, fueled by scenes, lives in individual moments better than memoir, generally speaking—but we’ve been over that before), and she spends a great deal of the book showing off her letters—like, actually showing them off to the reader (there are, by my count, sixteen reprinted throughout this slim book), and talking up her skill as a writer. I mean this with no disrespect; the letters are very impressive, after all. Besides, one understands the impulse to spend more time on the writing process than on emotional introspection; throughout Can You Ever Forgive Me?, Israel, an out-of-work biographer, seems to be posturing for a new assignment (“my success as a forger was somehow in sync with my erstwhile success as a biographer”). This is the memoir as career rehabilitation—as pitch.

All of this means that the book has the quality of a lark. The situations never feel quite real, and even when the FBI agents come around, she dashes them off as stereotypes (“Ed Harris and Tonto,” she calls them). By the end, she assesses her feelings: “Any remorse I experience about this phase of my life in crime has nothing to do with the money various dealers might have lost; I think most of the dealers came out ahead. The remorse here is personal. I betrayed some people whom I had grown to like.” The film turns this into a surprising monologue, as Israel reveals, in newly heartfelt fashion (character arc!), that her time as a forger was the best time of her life. Why? Because it was the only time in her life that she really felt like she was connecting with others? Again, witness the importance of a good cinematic sidekick like Jack Hock. Desperation can be almost fun when you see it reflected in the eyes of a charming chum.

How to Free Yourself From the 'Walking Essay' 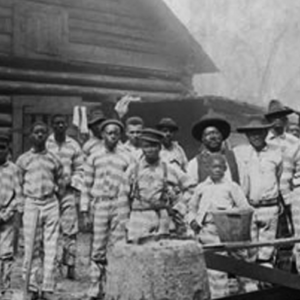 A colored man came and he said he would Take care of him good care and pay me     five Dollars a month his name...
© LitHub
Back to top