Olivia Campbell Considers the Legendary Absorption of the Dancer

As the drummer beats his rhythm—the heels of his palms resounding against stretched animal hide—I move. I am moved. Arms reach and retract, spine twists and tilts, legs stretch and sweep across the vast, golden wood floor.

This being an improv dance class, my body is mine to do with whatever I wish. I quiet my over-anxious brain and allow the music to guide my body in carving out a path through space. Coming from the restrictive, highly choreographed world of ballet, improv feels as freeing as skipping naked, newly feral, through a lush, flower-soaked field. I move. I am moved. Overtaken. Once the music ends, I emerge from a trance to find I have no idea how I got to where I am in the room or what movements got me here.

History and culture offer a treasure trove of attempts to interpret dance’s unique power over our bodies and minds.

The films The Red Shoes and Black Swan feature leads who are driven to demise by seeking perfection in the art of ballet. Their obsession with dance consumes them, and in forsaking all other aspects of life, they destroy themselves. At the end of The Red Shoes, our female protagonist jumps in front of a train, showing us that to dance is to forget the world, to be swallowed whole.

“In some films … the desire ‘to dance’ itself is toxic,” Adrienne L. McLean writes in Dying Swans and Madmen: Ballet, the Body, and Narrative Cinema. “[M]erely associating with ‘the world of ballet’ … can prove fatal.” As for the protagonist of The Red Shoes, McLean notes, “Vicky is doomed merely because she is a ballerina.”

Black Swan grows the roots of this artistic annihilation theme even deeper. Near the beginning of the film, the prima ballerina who’s being forced into an early retirement walks into traffic, a not-so-subtle message that without your art, there is nothing. Throughout the film, our main character is haunted by increasingly intense hallucinations involving her rival/understudy, a talented up-and-coming dancer who happens to bear a passing resemblance to her. This dual perceived competition, with another and within herself, leads her to seek a level of artistic perfection that ultimately can only end in self-destruction. Dance as self-absorption that bloats beyond the bounds of sense and reason.

Since a dancer’s body is at once brush, paint, canvas, and artist, self-involvement is practically a prerequisite. To be obsessed with dance is to be obsessed with yourself. While the prospect of artistic perfection is intoxicating, its pursuit can paradoxically spell loss of creative freedom. When dance is more than a hobby, the ecstatic freedom begins to be eaten up by the intense restriction of aesthetics: technique, musicality. What’s more, professional dance’s all-consuming nature demands physical, social, and psychological sacrifices. So is it the seeking of perfection, the self-absorption, or the dance itself that invokes madness?

Of course the mad artist trope isn’t confined to dancers. Musicians, visual artists, writers, actors: no artist is safe from the titillating perceived connection between madness and creative genius. Think films like The Soloist, about a schizophrenic cello prodigy, Birdman, the tale of an aging actor on the precipice of insanity, and of course Wes Anderson’s new work The French Dispatch, which includes an abstract painter who loses his mind in pursuit of artistic perfection.

“The idea of the mad artist is so compelling,” psychologist Dr. Sybil Barten said at a symposium on the subject. “Both madness and creativity are rooted in the unconscious.”

Some scholars argue that creatives were historically seen as mad because regular people needed a way to explain their genius and their odd behavior. In the Victorian era, being mad simply meant deviating from the norm. Creativity requires risk-taking, spontaneity, non-conformance. These behaviors surely signified madness.

I have been lost in the throes of artistic creation as both a writer and a dancer; the former feels absorbing, while the latter is transformative, nearly spiritual. As a full-body endeavor, I can’t help but feel dance is the most intensely overwhelming and consuming of all the arts. A 2005 study found that dancers reported much higher levels of absorption than other athletes. The researchers explained that absorption is correlated with spirituality and altered states of consciousness.

Of course, most of the time dancing is coded as a feminine pursuit, especially when it comes to cultural depictions of ballet and modern dance. That means hiding underneath the more obvious morals of these stories, I see the insidious reinforcement of our cultural belief that for women, to indulge in art is to forget their proper place in the world. To devote yourself to perfecting your artform is to reject your role as society’s caregiver: a cardinal sin that can’t be left unpunished.

As we learn from the original fairy tale of The Red Shoes by Hans Christian Andersen, dance is also a power that can be used against you. The story is actually about a young girl whose shoes get cursed because of her vanity, and she is forced to dance for the rest of her life. When the girl should have been tending to her dying adoptive mother, she went out to a fancy ball instead, so she is doomed to eternal dance: “Dance you shall,” the man who curses her screams. “Dance in your red shoes till you are pale and cold, till your skin shrivels up and you are a skeleton! Dance you shall, from door to door, and where proud and wicked children live you shall knock, so that they may hear you and fear you! Dance you shall, dance—!” This is dance as torture, brought on by the sin of selfishness.

In the horror film Suspiria, the dancer is not the victim—she is the one in control. Dance is a way to channel supernatural forces for malevolent purposes—to torture or maim others. The story revolves around a mysterious modern dance company that’s also secretly a coven.

In one of the most terrifying scenes in the 2018 remake of the 1977 film, we watch as the new company member dances her predecessor to death’s door without ever touching her. Their bodies are connected by the dance, so as one woman twirls and whips and contracts, in a different room, we see the other being flung around like a rag doll, her body grotesquely contorting, bones snapping, until she is left a simpering pile of sinew. The satanic series of movements has been employed to transfer the lifeforce of the older dancer into the new one. One person’s ecstatic creative freedom is another’s pain and suffering. The separation of the two women reminds us that sometimes this harm is invisible to us.

To lose myself in pursuit of balletic perfection was indeed, for me, a self-destruction. A madness. Losing myself in the creative flow of dance is self-liberating.

But the power of dance can also be wielded for good. The bizarre, disturbing cult favorite Netflix show The OA, also uses a specific series of movements to channel supernatural forces. This time, the choreography’s goal is the opposite of that in Suspiria: it seeks to reverse death. In this case, five movements done by five people in unison, repeatedly, can slowly return life to the recently departed. These movements can also open portals to other dimensions, revealing dance as more powerful than death, and capable of opening up infinite new worlds and possibilities. As a society that exalts words above all else, it’s easy to overlook the fact that movement can convey meaning far beyond the bounds of any vocabulary.

These scenes recall ancient rain dances, fertility dances; dance as prayer. An order of Sufi Muslims spin themselves into a frenzy—dervishes whirling until they lose all sense of their bodies in space and time—as a form of meditation, a search for the divine. Dance as a way to tap into a higher power.

Perhaps dance is a supernatural dabbling that shouldn’t be taken lightly. Perhaps it is its own peculiar sort of madness. Or maybe it’s just brain chemistry. Dance’s transformative power might simply be the state of artistic flow, a state not everyone finds comfortable to inhabit. In a flow state, your brain dampens its executive function network and allows the default mode network to take over. (Brains of creative geniuses actually show increased activity in both networks simultaneously.) Letting your default mode network drive for a change can feel discombobulating at first. But that’s precisely the point.

Writers rave about the creatively generative power of walking, about how the movement of the body jolts the brain’s machinations. Just imagine the rush, then, of the movement itself being both generator and  outcome.

While writing, I still experience the flow state, but it is not nearly as immersive as my dancing flow. One difference is that the production and consumption of writing is separated by time, the creator separated from the consumer. Dancers encounter their audience live and in person, creating an unreplicatable kinetic electricity. You can practice all you want beforehand, but once the music starts, there are no more chances for editing.

Words are too literal, too specific. Dance’s meanings are mushy, subjective. Subjectivity can also be scary, disquieting even, but it can also be freeing. Movement succeeds where words fail.

I struggled for a long time with how selfish dancing felt. You spend hours a day staring at your reflection in the mirror. I lost myself in dance. In wanting so badly to succeed, I prized perfection over my health: ignoring inflamed tendons, pounding laxatives, breaking bones, losing toenails. Now, freed from the pressures of professional success, dancing feels like freedom again. Therein lies the important distinction. To lose myself in pursuit of balletic perfection was indeed, for me, a self-destruction. A madness. Losing myself in the creative flow of dance is self-liberating.

For me, dance is meditation, escape, therapy. It requires nothing less than living exclusively in the moment. To dance is to be swallowed by the now, to live in the perpetual present. To dance is to lose yourself in a fugue outside of time, just beyond words, cushioned from concern. 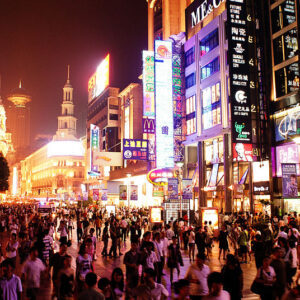 Until recently, the hardships facing the first generation to be born after China’s economic reforms in the late seventies...
© LitHub
Back to top