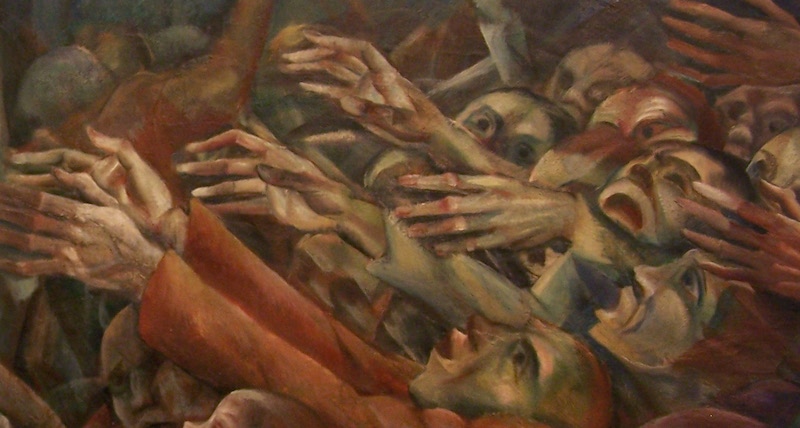 "Radiant Stations of the Crass" and Other Rituals of Consumption

If Black Friday did not exist, Thomas Pynchon would invent it. Black Friday is the High Mass of American Consumerism: an annual ritual of crowds feasting on the promise of deals after they have feasted on Thanksgiving meat. Early openings, huge savings, long lines, rushed check-outs, clogged parking lots. We might be buying gifts for those we love, but it is difficult to not view this day as a threnody. How did we get here?

Months after 9/11, Thomas de Zengotita wrote of the numbing of the American mind: “There is no important difference between fabrication and reality, between a chemical a pill introduces and one your body produces, between role-playing in marital therapy and playing your role as a spouse, between selling and making, campaigning and governing, expressing and existing.” He attempted to chart the temporary nature of our grief, and concluded that we are not worse people than we used to be—we are overloaded: “The moreness of everything ascends inevitably to a threshold in psychic life. A change of state takes place. The discrete display melts into a pudding, and the mind is forced to certain adaptations if it is to cohere at all.”

Pair that sentiment with sentences from Under the Volcano by Malcolm Lowry: “Incalculable are the benefits civilization has brought us, incommensurable the productive power of all classes of riches originated by the inventions and discoveries of science. Inconceivable the marvellous creations of the human sex in order to make men more happy, more free, and more perfect.”

Black Friday is the apex of that numbing perfection of our consumerism. Is it a blessing to be blessed with so many options, so many ways to spend our money? Often books about consumer culture have it both ways: they critique the commodification of our selves, and yet they know the language of advertising can sing on the page. Here is a reading list that captures the spirit of our greatest consumer holiday.

The cab ride that opens the novel reads like a catalogue of American consumer culture: Wall Street, banks, theater advertisements, McDonald’s, Blaupunkts, Timothy Price’s “Tumie calfskin attaché case he bought at D.F. Sanders,” an Easa-phone, a “six-button wool and silk suit by Ermenegildo Zegna, a cotton shirt with French cuffs by Ike Behar, a Ralph Lauren silk tie and leather wing tips by Fratelli Rosetti,” and his “expensive-looking Walkman.” A few pages later, Price’s tie changes brands—“he turns around and straightens his Versace tie”—either a notable copyediting blip or a sly comment on the interchangeable nature of our materials.

Main character Patrick Bateman’s murderous rage reaches its pinnacle in domestic spaces, where he and others of his set have cultivated their social lives with the blueprint precision of architecture. An original David Onica portrait hangs above Bateman’s gas-log fireplace: “a six foot-by-four-foot portrait of a naked woman, mostly done in muted grays and olives, sitting on a chaise lounge watching MTV, the backdrop a Martian landscape, a gleaming mauve desert scattered with dead, gutted fish, smashed plates rising like a sunburst above the woman’s yellow head, and the whole thing is framed in black aluminum steel.” Although the satire of some of his possessions now seem trite—his VCR boasts a “three-week, eight-even timer”—he owns a Wurlitzer jukebox, a Baldwin concert grand piano, and a Sansui stereo system. Every mundane domestic action Patrick undertakes and every product that polishes that action is described in meticulous, appreciative, consumerist detail.

Mullen’s prose poems are sharp and smooth, depicting a supermarket like we’ve never seen before: “With eternal welcome mats omniscient doors swing open offering temptation, redemption, thrilling confessions . . . In sanctuaries of the sublime subliminal mobius soundtrack backs spatial mnemonics, radiant stations of the crass. When you see it, you remember what you came for.”

Mullen chews copy speak and spits it back: “Cool cache stashed between carbon dated ziplocked leftovers and soothing multicolored safety tested plastic teething ring.” The next time you drone through aisles, think of her lines: “A dream of eggplant or zucchini may produce fresh desires. Some fruits are vegetables. The way we bruise and wilt, all perishable.”

A novel that captures the sentiment of a generation is an advertising dream: text as context, story as sellable item. Although Coupland rejected his identity as generational guru, Generation X, the story of three friends, remains the most worthy document of a culture.

Andy, the narrator, says “where you’re from feels sort of irrelevant these days”—less so from a sense of generational unity, and more from the fact that “everyone has the same stores in their mini-malls.” Coupland’s marginal definitions of terms like “poverty jet set” and “historical underdosing” commodify the text, creating a novel in service of explanation: a literary manual of culture.

The desert offers these characters an escape from their staid suburbs, where “Our systems had stopped working, jammed with the odor of copy machines, Wite-Out, the smell of bond paper, and the endless stress of pointless jobs done grudgingly to little applause. We had compulsions that made us confuse shopping with creativity, to take downers and assume that merely renting a video on a Saturday night was enough.” Yet beneath this consumer noise, characters seek meaning: “We know that this is why the three of us left our lives behind us and came to the desert—to tell stories and to make our own lives worthwhile tales in the process.”

Published in 1965, Perec’s novel became a required text in French secondary schools. Perec considered the novel a way to show how the “language of advertising is reflected in us.”

Second-person narratives by David Foster Wallace, Lorrie Moore, and Jay McInerney have placed the narrative lens on the consumer-reader, and Perec is an ancestor to this tradition. Perec’s first chapter brings the reader through an apartment, cataloging the material rather than the human. “There, life would be easy, simple,” Perec writes of the apartment’s couple: “All the servitudes, all the problems brought by material existence would find a natural solution.”

Twenty-four year-old Jérôme and twenty-two year-old Sylvie are market researchers, a profession that “left them an appreciable amount of free time.” This accumulation of well-proportioned things creates a state of transcendence for the couple: “They would call this balance happiness, and, with their freedom, with their wisdom and their culture, they would know how to retain and to reveal it in every moment of their living, together.”

Ballard’s novel takes the theme of Pynchon’s story “Entropy” to its absurd conclusion: a self-contained, high-rise world where every need and desire of its inhabitants is fulfilled, resulting in isolation within steel and glass. The forty-floor building has a thousand apartments, along with a supermarket, bank, salon, liquor store, school, and several swimming pools.

The story begins “Later, as he sat on his balcony eating the dog, Dr. Robert Laing reflected on the unusual events that had taken place within this huge apartment building during the previous three months.” Dr. Laing feasts while “squatted beside a fire of telephone directories” before “setting off to his lecture at the medical school.”

The first hint of violence three months before? A bottle of sparkling wine that “had fallen from a floor fifty feet above, ricocheted off an awning as it hurtled downwards, and burst across the tiled balcony floor.” In Ballard’s dystopian world, a grain of sand can throw off our system of convenience, and descend us into terror.

Fama might be the poet laureate of Cyber Monday—“The Internet is my home / Where it’s easy to be beautiful”—but his poetry is an ode to the pull of being out in New York City: “I am at Uniqlo / Buying underwear / And after I paid / I stayed and shopped again.” Each line arrives, unpunctuated, like overheard gossip.

“I want to create a product,” he writes, “too unstable to be marketed.” “I could write here randy details / of my consumer choices / banal and otherwise / it would not amount to much.” As consumers, we are far less interesting that our purchases.

“The station wagons arrived at noon, a long shining line that coursed through the west campus.” DeLillo begins his novel with the return of students to campus, but the students are less important than what they bring: “carefully secured suitcases full of light and heavy clothing; with boxes of blankets, boots and shoes, stationery and books, sheets, pillows, quilts; with rolled-up rugs and sleeping bags; with bicycles, skis, rucksacks, English and Western saddles, inflated rafts.” More: “stereo sets, radios, personal computers; small refrigerators and table ranges; the cartons of phonograph records and cassettes; the hairdryers and styling irons; the tennis rackets, soccer balls, hockey lacrosse sticks, bows and arrows; the controlled substances, the birth control pills and devices; the junk food still in shopping bags—onion-and-garlic chips, nacho thins, peanut creme patties, Waffelos and Kabooms, fruit chews and toffee popcorn; the Dum-Dum pops, the Mystic mints.”

The narrator, Jack Gladney, calls this arrival a spectacle; equally so is the family’s Friday night ritual of Chinese food and television. His wife, Babette, makes the decree: “She seemed to think that if kids watched television one night a week with parents or stepparents, the effect would be to de-glamorize the medium in their eyes, make it wholesome domestic sport.” Later, the family journeys to the Mid-Village Mall. Mother and children follow Jack “through the emporiums and department stores, puzzled but excited by my desire to buy.” With a euphony that would make the Latin-liturgy celebrating priests of his youth proud, DeLillo documents Jack’s consumer transcendence. His family tells him to buy two shirts when he can’t choose one. They “fed me pretzels, beer, souvlaki . . . They were my guides to endless well-being.” Why not? His “family gloried in the event. I was one of them, shopping, at last.”

Listen, Black Friday shoppers, to DeLillo, your priest: “I shopped for its own sake, looking and touching, inspecting merchandise I had no intention of buying, then buying it . . . I filled myself out, found new aspects of myself, located a person I’d forgotten existed . . . The more money I spent, the less important it seemed . . . I felt expansive, inclined to be sweepingly generous, and told the kids to pick out their Christmas gifts here and now . . . Voices rose ten stories from the gardens and promenades, a roar that echoed and swirled through the vast gallery, mixing with noises from the tiers, with shuffling feet and chiming bells, the hum of escalators, the sound of people eating, the human buzz of some vivid and happy transaction.”

Featured image: detail from The Orator, 1920, by Magnus Zeller. 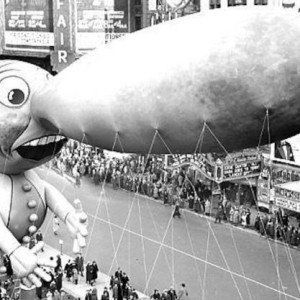 Hi. You probably want to ask me a question. It’s a valid question. It’s the question most non-NDN* (*Indian) people want...
© LitHub
Back to top
Loading Comments...