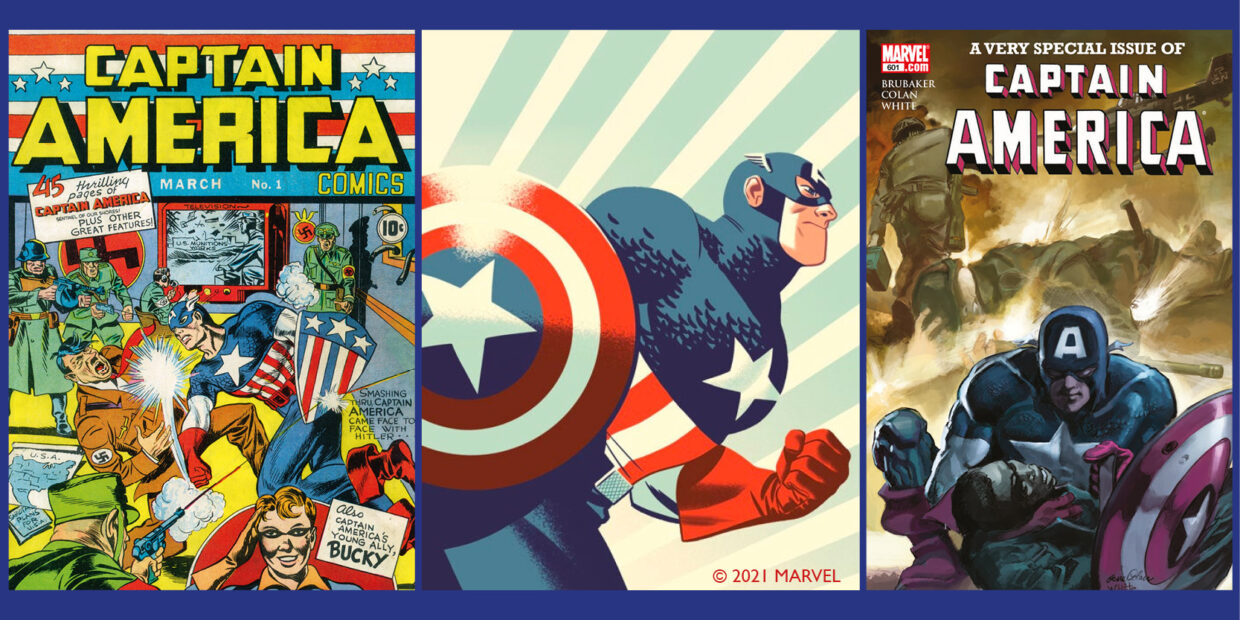 Roy Thomas on the Rise of an Iconic Illustrated Figure

Captain America has always been a winner.

With all the talents that have recorded his adventures, from his Timely Comics beginnings 80 years ago through the latest offerings from Marvel Entertainment, both in comics and now in other media, how could he possibly have been anything else?

By 1940, publisher Martin Goodman was already flying high in the burgeoning comic book industry. He had one massive monthly hit on his hands—Marvel Mystery Comics, starring the Human Torch and Sub-Mariner—and was experimenting with more titles, including plans to soon launch both the Torch and Namor in their own titles.

But he wanted more.

He well knew that the war raging across the world against Germany and her allies was not likely to be resolved without the involvement of America, for the second time in the 20th century. And he wanted a comics hero who could represent that fast-approaching rendezvous with destiny.

Enter Joe Simon, his spanking new comics editor—and Joe’s partner in crime-fighting, Jack Kirby. As artists, writers, and conceptualizers, the pair had few if any equals in the early comic book ranks. They were a one-two punch.

Perhaps Simon came up with the original costume and even name—the truth of all that is lost in the mists of history—perhaps others scripted some of the actual stories—and there were other inkers involved—but it was undeniably Kirby, above all, who brought the new Sentinel of Liberty to life, in the pages of Timely’s Captain America Comics #1, which hit the nation’s newsstands around the end of 1940, with a March 1941 cover date.

At that point, Captain America was already becoming a popular phenomenon, with his exploits also appearing in the new anthology title All Winners Comics.

And what a debut it was! In the course of an action-packed eight-page origin, 4F weakling Steve Rogers metamorphosed into a red-white-and-blue powerhouse code-named Captain America—knocked the stuffing out of the Nazi agents who killed the scientist behind the Super-Hero formula—even acquired a young sidekick named Bucky, who would become one of the best-known second bananas in pop literature.

Of course, Jack and Joe’s origin was barely the beginning. They produced three more exciting Captain America stories just in that premiere issue . . . one of which introduced the ultimate Nazi, the Red Skull, destined to become one of the best-known villains in the history of the medium.

And they topped off that quartet of tales (plus a two-page Cap text story) with two additional, non-Cap yarns to round out that first issue . . . one of which, Hurricane, was even drawn by Kirby. Didn’t that guy ever sleep?

Captain America Comics #1 became, inevitably, the unanimous choice of all concerned to become the comic book reprinted in a variorum, stand-alone edition packaged with the book you now hold.

Over the course of 1940–1, Simon and Kirby produced the first ten issues of Captain America Comics before they split Timely for other challenges. But they left behind one of the most powerful templates ever devised for portraying a Super Hero, especially one who was the embodiment of US patriotism in a time of imminent worldwide war.

At that point, Captain America was already becoming a popular phenomenon, with his exploits also appearing in the new anthology title All Winners Comics. One artist who had worked on those ten initial issues was Al Avison, who had managed to imbibe at least some of the spirit of Kirby during that year’s worth of effort. Then there was young Stan Lee, Joe’s successor as editor, who had cut his eyeteeth scripting a two-page text story of Cap in issue #3 and couldn’t wait to tear into a comics saga of the star-studded stalwart.

Only six issues into the new regime, Lee and Avison united for a 25-page Captain America epic, by far the longest to date. (It was good to be the editor: scripter Stan could write stories any length that editor Stan would okay!) Not even the double-page splashes by Jack Kirby were any more dramatic than Avison’s for ‘Red Skull’s Deadly Revenge’ in Captain America Comics #16 (July 1942). The penciler had uncredited help from two of Timely’s best inkers of that era, Syd Shores and George Klein. And nobody who read that yarn was likely to forget the image of the Red Skull wearing Cap’s colorful costume, as he tried—and inescapably failed—to make a mockery of all that Steve Rogers stood for.

Captain America reigned supreme among patriotically garbed heroes during the World War II years, and fought on till 1949.

The true tour de force showed that, even without the twin genius of Simon and Kirby to guide him, Captain America would fulfill the fated greatness inherent in him from the start. (Still, nobody’s perfect: When Cap and Bucky stand over the Skull’s apparently lifeless corpse after he falls from an airplane, they can’t be bothered to make sure he’s really dead. Instead, they rush off to new thrills . . . and somehow, we’ll never know how, the Red Skull would be resuscitated to fight another day, in another place, even for a different cause.)

Captain America reigned supreme among patriotically garbed heroes during the World War II years, and fought on till 1949 . . . the year in which he, the Human Torch and Sub-Mariner were all put out to pasture, as most Super Heroes at other companies already had been.

But, in 1954, when TV’s Adventures of Superman had shown there was still gold in them costumed-hero hills, publisher Goodman had editor Lee revive Timely’s wartime ‘big three.’ It was a false spring, and the revival lasted only a year or two . . . though long enough for Cap to get involved up to his flare-topped boots in the Cold War. In this era, yet another strong, inspired artist entered the lists to draw him: none other than John Romita, near the start of a glorious career in comics. John combined the action feel of Jack Kirby with the humanity and characterizations of Milt Caniff (of Terry and the Pirates fame), as he drew all but one of the mid-1950s Cap tales.

“The Hour of Doom,” from Captain America #78 (September 1954), was the last of that round of Cap adventures; the time hadn’t been ripe for a full-scale Super Hero resurgence. Even so, the (sadly unidentified) writer’s Cold War scenario posited the wonderful image of Captain America heroically holding back the very hands of time itself—and the triumph of American good over collectivist evil, whether represented by the Nazis of the previous decade or the Iron Curtain Ivans of the then-current one.

But it was nearly a decade later—and, coincidentally, in his very next appearance following his 1954 denouement—that Captain America basked in his ultimate moment. Stan Lee (now working with returned artist/co-plotter Jack Kirby—and very productively, too!) was bringing out new Super Heroes like there was no tomorrow, and they were selling like the proverbial hotcakes. Even the Sub-Mariner and a teenage Human Torch had returned.

But—would an audience that had yawned at his 1950s return be any more enthusiastic about Captain America in a time with no looming war to unite them?

Stan and Jack brought Cap back to roaring life in The Avengers #4 (March 1964), one of the very first comics to sport the new “Marvel Comics Group” logo that now gave the old Timely company a more dramatic new identity. Cap would be a “man out of time”—frozen in suspended animation since 1945 (never mind all those stories between ’45 and ’54), now thawed out and anxious to find his place in a world that had moved on for nearly two decades without him. But, along the way, he had lost his faithful young friend Bucky—seemingly killed by the same blast that sent Cap into deep-freeze. Stan played those aspects to the hilt, and Kirby’s dramatic artwork was never more masterful or evocative. Captain America quickly proved himself worthy of a level of popularity matching even that of his fellow Avengers Thor and Iron Man.

Since then, he’s never been out of print—or out of the limelight. 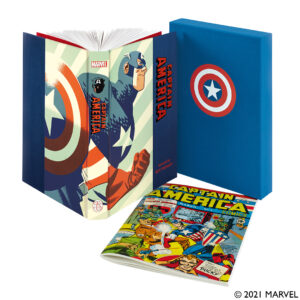 © Marvel 2021. The above is part of the introduction of The Folio Society edition of Captain America by Roy Thomas. It is available exclusively at foliosociety.com/marvel

Roy Thomas has been a writer and often editor in the comic book field since 1965, when he gravitated to Marvel to become Stan Lee’s assistant and protégé. He succeeded Stan Lee as Marvel’s editor-in-chief in 1972, and was only the second person to script a Spider-Man story. He has been at the forefront of the comics industry for much of his life and is credited with co-creating, amongst other characters, Vision, Carol Danvers, Ultron, Iron Fist, Red Sonja, Ghost Rider, Nighthawk, Banshee and Valkyrie. Thomas is currently editor of the fanzine Alter Ego, and in 2011 was elected to the Will Eisner Hall of Fame. 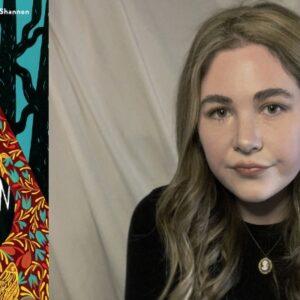 On this episode of New Books Network, Gabrielle Mathiue talks to Ava Reid about her new book, The Wolf and the Woodsman...
© LitHub
Back to top
Loading Comments...