Linseed oil, varnished wood, unwashed urinals, leaking gas, mutton stew, sizzling sausages, mildewed towels, mown grass, sweaty socks, illicit tobacco: these are just some of the odors that waft their way through memoirs of public school life in the early 20th century. Again and again, it is the sense of smell that triggers the deepest, most ineradicable school memories. Of course, the olfactory is tangled up with the visual, sonic and tactile senses, but smell comes first, transporting the subject back into the deep fabric of the past, the very marrow of memory. Cyril Connolly describes his first days at St Cyprian’s prep school in exactly these terms: “I came to know the smell of the classrooms, of slates, chalk and escaping gas, and to fear the green baize doors which separated the headmaster’s part of the house from the boys. On the one side, silence, authority, the smell of savories; on the other noise and freedom.” For Connolly, smell is primary. The past is present first as a subtle whiff, and only then is it fleshed out in the more enduring registers of sight and sound. And with smell comes the equally primordial sense of fear, his earliest awareness of the school’s authority and his terror of what lies on the other side of the green baize door.

The human sense of smell is generated in two of the oldest parts of the brain, the amygdala and the ventral insula, both of which evolved earlier in the life of humankind than the neocortex, which is the seat of our more refined linguistic and rational faculties. In evolutionary terms, smell is the most atavistic of senses, which stems from the least rational parts of the brain. It triggers deep-seated associations of fear and lust, repulsion and desire, and is the source of some of our most ancient taboos, which stem from the visceral, involuntary recoil from shit and rotting meat. With its deep evolutionary history, smell transports us not only back into childhood, but into the early life of the tribe. It reactivates the primal fears and desires that would otherwise remain buried by civilized society and adult behavior. No wonder, then, that smell is so central to boarding school memoirs.

In the mid-20th century the critical public school memoir became an important subgenre of English literature. Seemingly all of the major (male) authors who came of age between 1910 and 1940 wrote some form of wounded school memoir, including Robert Graves, Henry Green, Harold Nicolson, Anthony Powell, George Orwell, Cyril Connolly, W.H.Auden, Christopher Isherwood, Louis MacNeice, John Betjeman, Cecil Day-Lewis, C. S. Lewis and many more. It was to this genre that Giles and Esmond Romilly turned for their first book-length publication in 1935, hoping to ride the wave of publicity generated after Esmond had run away from Wellington College to edit the underground magazine, Out of Bounds, which sought to foment student rebellion in the public schools. For the Romilly boys, this was part of the extended propaganda war against the public school system and the repressive society it helped to sustain. Esmond even chose to spend his publisher’s advance on setting up an alternative news agency that would gather and sell critical stories about the public schools to the mainstream press. The news agency didn’t last long, but the memoir was favourably reviewed and sold well, running to a second edition only two months after it was published.

The genre emerged in large part as a corrective to the romantic myth of school life that was conjured again and again in public school fiction. These were antithetical genres, in terms of both political outlook and literary form. The school story tended to be conservative in politics, venerated the collective life of the institution and worked towards a narrative climax in which the wayward individual fully committed to the ideals of his school, class and nation. The school memoir, by contrast, tended to be liberal or socialist in politics, valorized the inner life of the individual and described the gradual formation of the author’s mature identity in opposition to the meaningless discipline of the institution and the inauthentic “character” of the typical public schoolboy. This process of dissident self-formation usually involved the author’s embrace of the twin gods of the age—art and communism, or some conflicted mixture of the two.

A telling exception to this rule is C. S. Lewis’s Surprised by Joy (1955), which mixes boarding school misery memoir with Christian apologetics. Lewis’s memoir describes the common experience of his class: early separation from the home (exacerbated in Lewis’s case by the death of his mother when he was ten), emotional deprivation, feelings of abandonment and futility, the oppressive conformism of institutional life and the flight to art and books as a refuge from his immediate environment. But unlike the majority of his peers, for Lewis the final escape from the values of the old school came through religious faith, rather than political commitment. “Looking back on my life now,” he recalls,

I am astonished that I did not progress into the opposite orthodoxy—did not become a Leftist, Atheist, satiric Intellectual of the type we all know so well. All the conditions seem to be present. I had hated my school. I hated whatever I knew or imagined of the British Empire.

Art, Communism and God: these were the only forces grand enough and glamorous enough to furnish a viable alternative to the all-encompassing public school ideal.

But while they were bitter critiques of the system, public school misery memoirs were also examples of the privilege that elite education conferred. Indeed, the narrative arc of the school memoir leads ultimately to the formation of the narrator’s adult self—urbane, cultured, ironic—from which perspective he looks back upon his schooldays with a mixture of resentment and nostalgia. From the safety of adulthood, the author is able to review his schooldays with magnanimity, examine the case from all sides and capture both the light and shade that fall upon the scene. Public school memoirs bristle with tales of bullying, abuse, corporal punishment, casual sadism, arcane customs, unfathomable rules, grinding boredom and emotional despair. But they also register the joy of intimate friendships, intellectual and aesthetic awakenings, dissident camaraderie and the slow ascent after graduation to prestigious positions within the cultural and political establishment.

[The school story] worked towards a narrative climax in which the wayward individual fully committed to the ideals of his school, class and nation.

The danger, however, was that the public school misery memoir would become an opportunity not only to diagnose the ills of the institution, but to wallow in the obscure details of one’s own bewitchment by a perverse system. The literary critic Regenia Gagnier has argued that the nostalgia that many left-wing intellectuals felt towards their schooldays had a dampening effect on the spread of socialism in 20th-century Britain. In rejecting their privileged education, she observes, critical memoirists also “rejected totalitarianism . . . But they had always fought totalitarianism with art, creativity, and individualism in isolation; therefore, they could not quite trust socialism, either.” Instead of putting their shoulders to the wheel of practical reform, as their political beliefs dictated they should, public school radicals more frequently pored over the details of their own personal sense of alienation, replayed in their memories their individual resistance through art, friendship and radical politics. While popular spy novelists like John Buchan and Sapper suggested that schoolboy aestheticism went hand in hand with political extremism and treason, the opposite was in fact true. More often than not, the secular religion of art, as expressed in the form of the public school memoir, tempered the radicalism of upper-class dissidents by maintaining their nostalgic attachment to the old school.

Recalling his days at Harrow in the 1910s, L. P. Hartley refers to the “Freudian bruise” of his school memories. Hartley begins his essay with a description of his irrational fear in later life of falling asleep on a train from Rome to Venice. This fear stems not from any serious concern about missing his stop, he realizes, but instead from the persistent memory of his schooldays and the constant dread of being late for morning call-over. Decades after leaving the school, Hartley bears the residue of institutional discipline in his subconscious. His fear of teachers and prefects, rules and conventions, remains with him in adulthood in the form of a “dent on my consciousness.” In fact, Hartley’s phrase “The Freudian Bruise” would make a good title for an anthology of autobiographical writing about public schooling in the first half of the 20th century, certainly a better one than Greene’s rather unimaginative The Old School. These narratives are often organized around key moments of desire, taboo, repression and transgression. They deal with memory as a kind of wound that will not heal, and they stage a return, in the aestheticized form of the memoir itself, to the source of these deep-rooted aspects of the self.

Cecil Day-Lewis echoes Hartley’s phrase in his own autobiography, The Buried Day (1960), in which he describes his experiences at Sherborne as “an invisible compost” from which his adult identity grew. Like the “Freudian bruise,” the image of the “invisible compost” conveys the subject’s ambivalent feelings of attraction and repulsion towards his adolescent memories. Day-Lewis casts his schooldays as a thick, oozing mulch, rank smelling but also endlessly appealing, something to be churned under but also lingered over and enjoyed. In later life, in spite of his rejection of the “false heroics” and “distorted values” of the public school ideal, Day-Lewis finds himself returning to Sherborne and immediately “falling under its spell.” By mixing the language of shit and magic, realism and romance, he captures the perversity of the boarding school experience.

Christopher Isherwood used a more antiseptic, medical register to convey the spell cast by the school over his developing character. Isherwood’s memoir takes its name, Lions and Shadows, from the novel that he worked on throughout his schooldays, a juvenile hybrid of public school fiction and experimental Bildungsroman that depicted a series of “tests” undergone by the protagonist in order to prove his masculinity in the eyes of the school. Looking back from the perspective of maturity, Isherwood describes this text as “less a work of art than a symptom—of a certain stage of pubic development in a member of a certain class, living in a certain country, and subjected to a certain system of education.” The effect of this perverse system is to turn the child into a “spurious adult,” so that in later life the old boy feels “bound to try to regain his childhood—by means which, to the outside world, appear ever more and more unreasonable.”

Isherwood describes the same sense of stalled development that Connolly captured with his theory of “permanent adolescence,” the stunted, backwards-looking, indelibly nostalgic mentality that ensured that members of the ruling elite remained in thrall to the memory of their schooldays. The word “nostalgia” is derived from the Greek roots nostos, to return home, and algos, pain. Rather than a longing for the past, which is the predominant meaning of the word today, the roots of nostalgia lie in a desire to return to one’s true home, to cease wandering and to re-engage with the source of one’s identity in a familiar, cherished place. The deep vein of nostalgia that runs through even the most critical of public school memoirs confirms that, in spite of its inhumanity, the boarding school was the author’s home for the majority of his childhood, the site of his most formative experiences and the foundation of his mature identity. 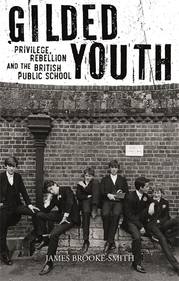 James Brooke-Smith is an Associate Professor of English Literature at the University of Ottawa. His writing has appeared in the Times Literary Supplement, Village Voice and Public Books. 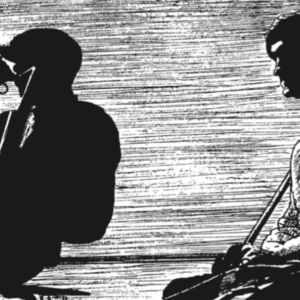 In 1945, Samuel Beckett published an article entitled “Le Monde et le pantalon” (“The World and the Trousers”),...
© LitHub
Back to top
Loading Comments...