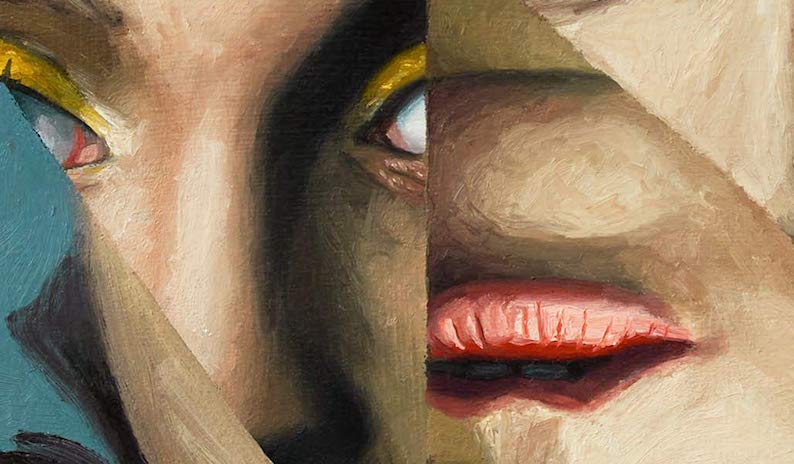 The Blurry Boundaries of Sibling Intimacy: A Reading List

A few years ago, my older brother got married. In the weeks preceding the happy occasion, a sad, stubborn feeling crept over me, which I can only describe as a kind of mourning. This troubled me: I had been, up until this point, as far as I could tell, genuinely happy for him. He was marrying a funny, intelligent woman he’d been in love with for the better part of a decade. I had gotten married a couple of years earlier to someone I loved very much, and whom my brother had adopted, with characteristic generosity, as his own brother.

Ever the younger sister, my feelings—tricky, melancholic, possessive—persisted for many days. Slowly, a phrase emerged in my mind, which seemed to give accurate voice to my feeling: This is the end of childhood.

My brother was 33 and I was 31 at the time. I hadn’t felt like a child in a long time. Our lives had long ago taken on their healthy, individuated shapes. Why then this sudden, overwhelming feeling of loss?

At my own wedding, a couple years before, my brother had been emotional too. He had come to think of me, he explained in his toast, despite my being younger than him, despite our outward differences, at times as an older sibling, other times a twin. The admission had surprised me. I had always felt so much the younger sibling, and yet I also knew what he meant. We had, it was true, over the course of our long relationship, been complex counterparts: opposites and mirror images; companions and competitors; interlopers and essential witnesses in one another’s lives.

Of course, time did its healing work. I was carried away by the celebrations, by seeing family and friends, by observing the love my brother and his partner so clearly felt for one another. After the wedding, I returned home with my husband, to my own full if imperfect life, and the intensity of my feelings subsided, making way for a duller, vaguer sense of something having irrevocably changed, the necessity of that change: that mixed blessing of growing up.

And yet my early feeling of loss, its intensity, stuck with me. What if, I wondered, I really was the kind of person for whom a sibling’s wedding, a sibling’s happiness, was in fact intolerable? What if I were someone for whom the sibling bond, this often fractious but primal connection, was the only one that meant anything to me? What if I could never recover from the end of childhood, the necessary rupture and violence of growing up and away from my family of origin?

Later, this thought experiment would become the starting point for my debut novel Tides, in which the enmeshed relationship between the protagonist and her sibling serves as the haunting undertow in the story of her intimate loss.

Beneath some of my favorite examples of novels that explore the blurry psychic boundaries of sibling intimacy. 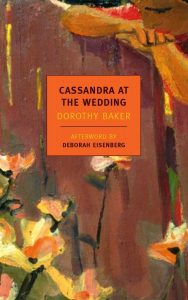 In this dark comedy of manners, Berkeley graduate student Cassandra, tries without success but with much pathos and comedy, to stop her identical twin sister, Judith, a Julliard-trained pianist, from getting married. Set at the family ranch, in the foothills of the Sierras, the first and final sections of the novel are brilliantly narrated by Cassandra, with Judith’s more even-keeled retelling sandwiched in between. The effect of the alternating points of view is tender, hilarious, and heartbreaking. It is easy to understand why Cassie is so desperate to preserve the sisters’ ‘ancient oneness’ and yet the narrative also points to the way the relationship suffocates and stalls both sisters. Cassandra at the Wedding is overflowing with intimate knowledge, of what it means to grow up in the embrace and shadow of another, and of how painful and necessary it is to sever that bond in order to become oneself. 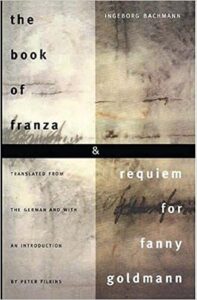 Bachmann died before she could complete her Ways of Dying novel cycle, but The Book of Franza, in its incomplete form, remains one of the most searching, shattering books I’ve ever read about trauma, memory, and the complicated bonds of siblinghood. Set in the aftermath of the Second World War, the novel follows adult siblings Martin and Franza from Vienna to the fictional Galicien, their rural Austrian hometown, into the Egyptian desert, where Martin is pursuing geological research. Franza has recently fallen apart after discovering that her husband, a renowned Viennese psychiatrist (nicknamed “The Fossil” by Martin), has been keeping a series of detailed notes about her, which he hopes to include in his scholarly work about experiments conducted by the Nazis on concentration camp inmates. As Franza further deteriorates – mentally, physically – she reverts to a childlike state.  Martin, whom Bachmann portrays as quintessentially male – rational and exasperated in the face of his sister’s torment – tries to make sense of ‘the entire myth of childhood and its puzzle.’ In this disorienting, slippery tale, points of view alternate between third and first person, with Martin and Franza shapeshifting between subject and object. It’s a disarming read; Bachmann’s gorgeous, elastic prose points to all that can be shared between two people, and that which is so harrowing, so unspeakable, that no language or relationship can reclaim it. 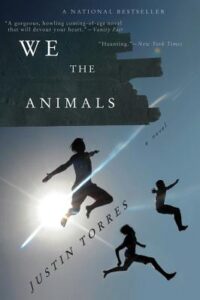 I can’t think of another book I’ve read that conveys with more poignancy the bodily experience of living inside a family. This is the story of three brothers, sons of a Puerto Rican father and white mother. For most of the novel, the ‘we’ stands in for the collective body of the boys, the single organism of their siblinghood. They speak, eat, fight, together, ‘one voice for all’, their ‘cave language’. They watch their father with fascination: they resist him, fear him, mimic him. The family, it seems, is a body that consumes all individual bodies. Slowly, the protagonist, the youngest boy, emerges in the narrative as a singular entity, an ‘I’ made separate by his burgeoning queerness, his love of reading and writing. The book works so effectively at the poetic level, that the very pronoun switch from the collective “we” to the solitary “I” is entirely devastating. 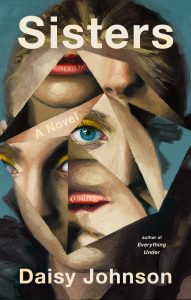 This lyrical, gothic novel follows teenage sisters September and July as they take refuge, after an unnamed incident, in a dilapidated family house in the North York Moors. Their mother, a writer of children’s books, disappears for days at a time inside her room and the girls, only ten months apart (but merging their birthdays after September decrees it) seem to exist in a state of mind-body-meld that belies something far more disturbing than your average sibling bond. When September loses her virginity on the beach, for instance, July feels the pleasure and pain as viscerally as if it were her own. July, the younger sibling, is our narrator for the majority of the novel, and we slowly see, through her eyes, the way September, the eldest and more domineering of the two, begins to possess her, to ‘wear [her] like a coat.’ The house too, starts to ooze and engulf and terrify, until the final intoxicating reveal. 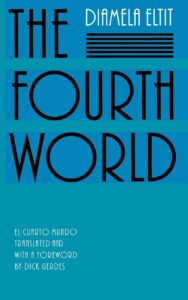 This is a strange little novel, but if you’ve ever wanted a play-by-play of what it feels like to share the womb with an overbearing twin, then this might be the one for you. In this diptych, the twin brother, able to inhabit the dreams of every one of his family members, plays the role of omniscient patriarch, narrating, in clinical language, not only the complexities of his parents’ relationship, but also his own feelings of envy, rage, and growing desire for his twin sister. In the second, more poetic and compelling half of the novel, the twin sister takes the mic, and describes her fraught pregnancy (you can guess who the father is…), and the complete dissolution of the family structure, the implosion of all order. First published in 1988, more than a decade into the Chilean military dictatorship, this is a radical, fragmented, discombobulating text that uses family dynamics and incest as a lens through which to view the effects of political repression on the intimate lives of its citizens. 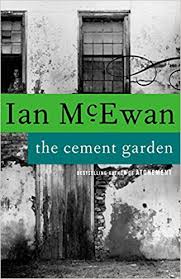 This is the darkest, most claustrophobic of the novels on this list. Four siblings, ranging from ages six to seventeen, go to great lengths to cover up the fact of their mother’s death in order to stay together in their childhood home. Our narrator, Jack, is fifteen and nearly superstitious about his filth. He nurses a fascination for his beautiful older sister, Julie, and masturbates nearly constantly. Time bloats in the stagnant, increasingly malodorous house, and the kitchen, in particular, becomes ‘a place of stench and clouds of flies’. The four children, in their private pact against the outside world, play-act, fight, laugh, and slowly regress to a primitive, feral state. Encouraged by his older sisters, the youngest child, Tom, takes to acting like an infant girl, sleeping in an old cot attached to the eldest sister’s bed. Their eerie idyll is threatened when Derek, Julie’s snooker champion boyfriend enters the frame. This increasingly disquieting story culminates in a fantastically shocking final perversion, which is permanently seared in this reader’s mind. Not for the faint of heart. 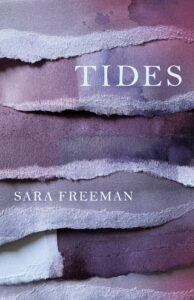 Tides by Sara Freeman is available now from Grove/Atlantic.

Sara Freeman is a Montreal-born writer currently based out of Boston. She graduated from Columbia University with an MFA in Fiction in 2013. At Columbia, she won the Henfield Prize for the best piece of short fiction by a graduate student. Her work has previously been published in a number of literary magazines. 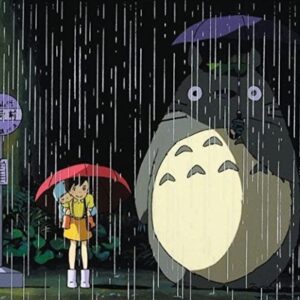 My Neighbor Totoro opens with a truck chugging along a country road, packed to the brim with furniture and belongings. In the cab,...
© LitHub
Back to top
Loading Comments...