Way back in the 20th century, the world was filled with gender stereotyping, most of which turned out to be nonsense. Women can’t play chess? When Judit Polgár and her sisters starting beating grandmasters and world champions in tournaments, that idea was quietly dropped. Men can’t do housework or manage a household properly? Not at all. They just have to want to. And train themselves for it; since we still don’t train boys in the global concentration needful to keep an eye on everything that needs watching.

While Neolithic Man went out hunting megafauna, Woman was gathering herbs, fruit, vegetables and grains, grinding, cooking, preserving and hoarding; all the while keeping an eye out that little Grug didn’t fall off a cliff, drown in a river or be carried off by a sabre-tooth tiger. This polymathic skill-set is ingrained in our genetic code now, since those who couldn’t do it fell out of the Darwinian lottery. Modern women’s lives are not that different. You have paid work, but you also have to run the household. Men “help out.” Which is a very different thing from taking responsibility.

When I was young and brimming with idealism, one of the things I realized was that we feminists at bottom were optimists. Yes, we do believe that men can be functioning adults. And they can be. More and more men are taking control of their lives, in the nicest possible way. But one of the last bastions of gender segregation was the military. Women had infiltrated the armed forces, but were still regarded with suspicion. And obviously they can’t be line-of-battle combat troops. Except of course in Israel, which never felt it could afford itself the luxury of a male-only army. Given that the IDF is one of the most successful of all modern armies, you would have thought that might have overcome this air of proprietorship; but apparently not. It was also widely held that women could not understand warfare. So when Lindy Cameron’s Redback was first published in 2007, I read it; and loved it so much that I lent it to my Dad.

Dad had been a soldier, at the tail-end of the Second World War. When a small child, I would hide under the kitchen table and listen to him and his mates conversing in undertones, complete with significant Kabuki silences, about their experiences. It was a revelation. The actual fighting was never mentioned. It was always about comic moments: the sort of thing Spike Milligan wrote about in his memoirs. The most significant emotional moment occurred when one of them asked, voice tremulous with the sense of touching on forbidden topics: “Mate? Do you still get the nightmares?” “Yeah, mate. Course I bloody do.”

Dad was a blokes’ bloke; also a shearer, tent-fighter, and later a foreman stevedore. I grew up with guns and swords adorning the living-room walls. He was firmly of the view that women had no place on the battle-field, and also that women could never understand soldiering. So I wondered greatly what he would make of a book written by a woman, with a female soldier in it.

He loved it as much as I did. And changed his views on women and soldiers on the strength of it. What he liked best were books of the likes of Tom Clancy and Matthew Reilly, crammed with dauntless heroes fighting for justice against terrorists, the CIA, MI6 and more weapons specifications than the mind can comfortably imagine. Redback has all of this and more, save for the weapons specifications. We women are left unmoved by them. We do not care about the number of rounds per second capable of being fired off by AK-47s. We are left cold by naval guns, missiles and the metaphorical horse-power of tanks, destroyers and armored personnel carriers. Those whose imaginations have been marooned in the doldrums of perpetual adolescence care about all that, but we don’t. Machines matter far less than those who wield them. But all the rest of the great panoply of international intrigue, crammed with well-drawn cameos of countless heroes and dullards—all this we do enjoy. As did my father, a man of far greater intelligence than most readers of pulp fiction.

Redback has all this in abundance. We have assassinations, terrorism, politics and intrigue. And—a stroke of genius this—our chief protagonist is not the invincible ironclad hero. Jana is an intelligent young woman kidnapped by improbable insurgents in the opening scene. Her rescuer is the ironclad hero. Or rather heroine. Commander Bryn Gideon and her band of professional fixers are superbly drawn. Gideon gets a certain degree of front-of-stage, but she is perceived only partly through her own eyes. When your muscular hero hogs the stage the effect is diminished; and we are heading down towards James Bond territory. To have Gideon perceived largely through Jana’s eyes is a deft piece of writing. And the insufferable Alan is perceived through many different eyes. All, however, agree that the man is a clueless pillock of the kind that every woman alive has met. Some have had the colossal misfortune to marry one. As Jana sits, kidnapped and bound, she asks herself “how a person as unobservant as Alan ever made it beyond copyboy, let alone become host of a top current affairs show.”

While world leaders swagger, pontificate and posture, the needful leg work to combat actual terror is being done by those who don’t shoot first and forget to ask questions later.

The plot is vast, panoramic, multi-centred, technologically proficient and—and in view of subsequent world events—alarmingly prescient. Perhaps the most notably skillful aspect of the narrative is the gradual revelation of what is going really on. The characters are as much in the dark for most of the book as the reader is. All they can do is follow the clues as they unfold. This book effortlessly lives up to the highest standards of airport fiction, save in one respect. The one thing the Clancys, the Reillys, and (needless to relate) the Flemings of the world cannot do is lightness of touch. They are probably aware that this is an essential component of popular fiction, and they would love to achieve it. But they don’t have the tools for it. Lindy Cameron can, and does. Allow me to quote some examples:

“What about the United Nations?” It was Ebrey again. Lyall and Thorpe exchanged amused glances. “He is young,” Thorpe observed.

“He was eyeballing the vid-phone as if he had shares in it.”

“And with pinpoint accuracy, their not-really-very-smart-at-all long range death dealer usually hits the empty house next door, or kills the wedding party up the street,” Kali said.

“The world will not actually end if you’re not fit enough to line dance with the other world leaders on Sunday night.”

In another sort of book, these deft observations would be underlined with data dumps relating exactly why the UN is completely useless; or why smart bombs aren’t so smart, or why global summits are a waste of time and space. But intelligent readers will supply these details for themselves; and there is no point interrupting your ripping yarn to explain yourself at tedious length.

Nevertheless. It is a time-honored hallmark of this type of book that the rule against information dumps is deliberately breached; because the readers who buy these books absolutely love reading all the minutiae of military hardware. What they want in the ripping yarn’s afterglow is the sensation that having now read the book, they feel they could personally strip down and reassemble anything up to a Seventh Fleet battleship. What Cameron does in Redback is apply the literary novelist’s tools to the problem. I know of my own knowledge that her exhaustive research included an interview with an Apache helicopter pilot. Rather than having the techno-speak narrated by the author or one of the characters, the information is dramatized by the interaction between the pilot and the mechanic. Show, Don’t Tell! holds as true in adventure stories as anywhere else.

Above all, what Redback does is to highlight the undeniable fact that the most useful thing spooks can do is to wait, watch, and collect information. While the CIA’s Bamm-Bamm just wants to shoot someone, his Aussie colleagues—bored out of their brains in Pakistan’s backblocks—prefer to find out what is actually happening. When Gideon and her team rescue the ineffable Alan—again—all they want for the latter is to get him safely out of the way so they can interrogate one of the black ops guys who can tell them why his fellow-American spook wants to kill him. Gideon and her team of Redbacks will not hesitate to shoot if they need to. But in a world where terrorists regard the Western Alliance’s surveillance of them with amused contempt, it is far more useful to try to find out what is really happening and why. While world leaders swagger, pontificate and posture, the needful leg work to combat actual terror is being done by those who don’t shoot first and forget to ask questions later.

Without giving any spoilers, I can tell you that this is the best book of its type I have ever read. It is a superb and inspiring work. You will never think the same way about computer games again. I recommend it wholeheartedly.

Kerry Greenwood OAM is the author of more than 50 novels, a book of short stories, and numerous non-fiction works. She is best-known for her Phryne Fisher series (as seen on film and TV) and Corinna Chapman, baker and reluctant investigator. The latest Phryne (Death In Daylesford) will be released in October. Kerry is also the author of several books for young adults and the Delphic Women series. She is not married, has no children, is the co-warden of a Found Cats’ Home and lives with an accredited wizard. In her spare time, she stares blankly out the window. 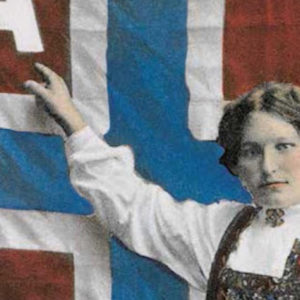 Being Norwegian is both a blessing and curse. It means living in one of the wealthiest and most progressive countries in the world,...
© LitHub
Back to top