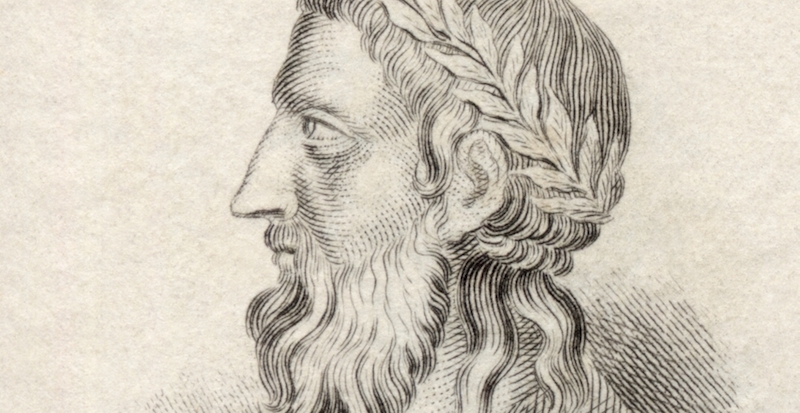 Dan Beachy-Quick on Anacreon the Greek's Lyrics of Drunken Love

Before the altar of Hera in Samos, as reported by Apuleius in his Flowers of Rhetoric, is a statue of the boy Anacreon loved, and whose name, Bathyllus—like a broken column’s stones among the green grass and red poppies of the ruin—is littered throughout the fragments remaining. The statue is singing a song to the tyrant Polycrates, who also loved the boy, and the song is a poem of Anacreon’s, sung “for friendship’s sake.”

Apt enough, that the boy would sing the song of one who loved him to another man who did the same, and for the brief flicker of time a lyric poem lives on the lips (moment that pauses time and makes it almost eternal); the song itself kept love open— disarmed rivalry, pettiness, jealousy; confirmed that love is larger than the bounds of the body in which desire is felt, kept, and satisfied. That the statue no longer exists might also be one of love’s lessons—the rumor alone, ancient as it is, lets us see the boy singing if not wholly hear the song.

Spurning epic seriousness, Anacreon sang of his life’s devotions, and his “life was devoted to the love of boys and women and to song.” Many ancient accounts add wine to the list of the poet’s erotic faiths, and Anacreon lived a life long enough to indulge himself more often than most. Born in Teos, he lived for 85 years, ending the wide span of his life in Athens. There, it is said, he saw the tragedies of Aeschylus performed—those plays that the tragedian described as mere “slices from Homer’s banquet,” so different from the poet’s lyrics of infatuation and drunken love.

That fragment of text places his life loosely in the sixth century BCE (570-485), alive during the reign of Cyrus the Great, friend with the poet Simonides who, according to Plato, was highly paid by the tyrant Hipparchus to never leave Anacreon’s side. Well-known for the delight his poetry gave—delight that sings of delights—the poet also served as moral warning for those unable to praise the luxury that birthed the beauty of his poems.

“Asked why he did not write hymns to gods but to boys, he replied, ‘Because they are my gods.’” Love blasphemes to stay true to love.

The facts get lost left to their own devices; the face gathers itself around the voice, and though nothing is known, the heart quickens with impossible presence.

Living such love leads to other depictions: a man with lust in his eye, robes trailing on the ground, limping with one foot bare and playing the lyre, singing a song to Bathyllus who, I’m guessing, is nowhere to be found. Nowhere save in the name embedded in song. Anacreon’s death arrives as one of those fated ironies that overwhelms fact by letting us see the poet’s face. This ever-drunk, ever-desiring poet dies in his 85th year when a single raisin gets stuck in his throat.

Let the tale be a lesson that every grape should be translated into wine; and let us see in the doomed sanctuary of our own minds the statue Pausanius saw in his travels through Greece, standing in the Athenian acropolis between gures of Pericles and Sappho, dear Anacreon, caught in stone “singing when he is drunk.”

In the 10th-century manuscript that contained the many volumes of the Palatine Anthology one also finds two volumes containing the poems known as the Anacreonata—poems written centuries after Anacreon’s life but written under his name. In the first poem, Anacreon himself, old but handsome still, still amorous, walks up to the nameless speaker, takes the garland from his own head and gives it to the other man, and the crown smelled of Anacreon.

“Fool that I was, I held it up and fastened it on my brow—and to this very day I have not ceased to be in love.” It is not known if it is one poet or many that wrote in the voice of Anacreon, singing the ancient loves, drunk on old wine ever new, singing the old names new . . . Bathyllus . . . The poems—complete, free of time’s fragmentation that leaves us Anacreon’s poems in tatters and ruins scattered through other texts—were written as late as Roman times.

The facts get lost left to their own devices; the face gathers itself around the voice, and though nothing is known, the heart quickens with impossible presence. I can have faith in such a poetry: to be in love with another’s love, and to write the songs that keep that love alive.

Lovely pigeon wild,
from where, from where did you fly?
From where? With pine-perfumes of balsam-air
your panting breath drops down its odor;
you come down in a mist, like little rain.
Who are you? And who cares for you?

“Anacreon sent me
to a child, to Bathyllus,
that boy so suddenly conqueror
and tyrant of us all.
Love herself took me in her hand
and And sold me for my little song;
aor Anacreon, many times,
I carry messages.
And now what letters from this man
I carry safe away!
And he tells me with open face
that he will set me free—
but even if he releases me,
I will remain for him his slave.
Why should I need to fly
from mountains down to fields
and make my seat in the trees
to eat—what?—some coarse, wild thing?
Now I eat cake
snatched from the hands
of Anacreon himself,
and to drink he gives to me
the wine he drinks himself, his oath to love.
Our drinking done, I begin my dance,
my despot striking the tune,
I cast a shadow on his face with my wings;
and when his tongue lulls itself to sleep,
I lie down on the strings of the lyre.
There, you know it all—. Now go away—.
You gave me to endless chattering,
man, like I’m some carrion-crow.” 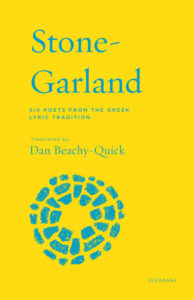 Dan Beachy-Quick is the author of A Whaler’s Dictionary, a book of interlinked essays on Moby-Dick; Wonderful Investigations, a collection of essays, meditations, and tales; and, most recently, Of Silence and Song, a collection of fragments, marginalia, travel writing, and poetry. He is also the author of six collections of poems, a novel, and other projects. The recipient of fellowships from the Guggenheim Foundation and the Woodberry Poetry Room at Harvard University, Beachy-Quick has also received the Colorado Book Award and has been a finalist for the William Carlos Williams Prize and the PEN/USA Literary Award in Poetry. He directs the MFA program at Colorado State University and lives in Fort Collins. 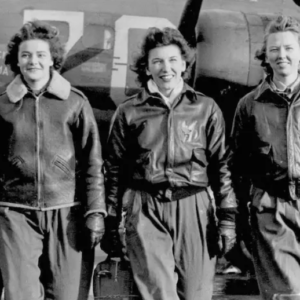 Way back in the 20th century, the world was filled with gender stereotyping, most of which turned out to be nonsense. Women...
© LitHub
Back to top
Loading Comments...