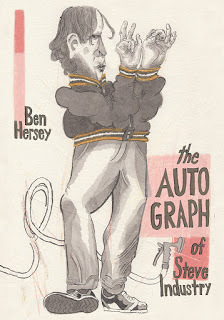 The following is from Ben Hersey’s novel, The Autograph of Steve Industry. Hersey is a writer and performance artist who has been featured at a wide variety of literary, performing arts, and music festivals. Hersey teaches writing and composition at Holyoke Community College and lives in Easthampton, MA with his wife and son. The Autograph of Steve Industry is his first novel.

On stage with my band, The Steamrollers, and we’re a long way from home mid-song. That’s a good one, a feeling. My eyes closed and Toby and Gardenhose behind me are synched up and the gravity of the music is thick while the air-floor is ripe and deep.

Beer cans crackle and Salisbury Beach on a summer day? Any day now, although the nightmare harmonica anthems coming out of me lately got me feeling pretty apprehensive about the idea of New Hampshire this summer.

Seeing a woman’s neck suddenly exposed while you are doing some mundane task, like shutting the silverware drawer, or putting on your blinker. “Necks in Traffic:” new song title.

I sometimes go into candle-panic at the Christmas Tree Shop, but there’s pleasure in that, too, that even though it seems sickly or something… no, you know what? It’s good.

The music of the ink drill, color is a fact, brilliant, to die for, and will soon be again visibly seeping under my alive hide. Ever since I was a kid, I been this way. Always had this picture in my head of my own organs drifting in spaces, certain bones, and certain muscles in transit. Oh, if the tats could move. Up to my head, down to my toes and over the city. The tattooed cityscape. Or other people’s bones, organs, muscles, too. Celebrity parts. Closing my eyes and imagining exchanging organs with Shelly Long. Slow inhalation / long exhalation. I always wanted to do her over the bar. Opening up on the leather tat chair. What stinging feelings will allow you to suck on—that’s definitely on my list. “Permit to Suck.” New song title.

Seasick bodies in motion bloated in Celtics windbreaker old days, Charlestown bowling alley townies plus murdered cousins plus psychedelic drug use plus roast beef and donut use let this all fall away with the onrush of Keno dopamine.

There are mornings in this life when you find yourself in a Dunkies with a fresh extra large extra cream and the cover’s off and the steam off eternity’s amber infiltrates your brain in such a way so as to make the seacoast cracker and crumble and the hot tide rises up for a kiss on your heart. And, yeah, I’m with Gardenhose most likely and we’re talking GPS systems or striped bass or whatever, but so what? Once I’ve lapped from that vessel, me and Gardenhose, well we’re just a couple quantum psychics hanging out in Beverly or whatever with the sun on our scars.

Sometimes you gotta do something even if it’s wrong, like a shit-eating-grin at the hottest city-girl behind her urban mask at 1:30 a.m. in Tambourine Man’s in Beverly. This was the other night about two minutes before we decided our next album is either going to be called Bay State Blues or Blue Taco Sessions.

Walk with me through my emotions. Let’s go out onto the street to get a good look at my house. Let’s stand in the shed, or the pantry, or the basement, and just take it in—physically. The smell of nails, dried paint cans and sawdust. Litter pieces frolicking up against a chain link. Hear my Saundra’s nine-headed lyric of fire? Me neither.

Sweet smells: creosote and/or milk duds. Suzy-Q use. I used to live near the Hostess Outlet, oh sweet lord, did I tantalize my mouth with death creams, lengthen my sways, trying to stay off drugs. You ever use Hostess to kick the coke habit? I could sometimes make a single Ding Dong push back the malady for as long as sixty minutes.

Soil in my fingertips gripping a pool stick with cigarette breath. Blanking out then keying in. Seeing familiar buildings from odd angles, feeling confused, being more sober than a counter top but still forgetting briefly who I am and the mystery that immediately follows like, “Wow, what am I talking about?” Walking through the lots at Eastern Auto Exchange just for a look. Blinking as important things pass me by or return, the burned leaves smell of my daughter’s jacket, holding a blank tape (and all that potential). I’ve learned a thing or two about letting go of the things I can’t control. God grant me the wisdom and whatnot. Know what I mean?

Wearing a fucked up t-shirt and working on the Chevy in the garage.

Pushing back the bills in favor of the frills. General Gao’s chicken and Keno at Kowloon. A thousand times, yes.

The A.C. in Stop & Shop during the summer. A thousand times, yes.

On stage, blowing up the dead-ends and moving on through the debris.

Getting paid after a show and going out for Dunkies. Having people go, “Dude.” Go, “Damn.” Go, “Wow, I didn’t even know that was real?”

When I feel like I’ve negotiated a stretch of cock-soft days in a builder’s mood. Memory is fucking wind, dude. When Saundra used to come home from the night shift at Bickford’s and dangle a twenty-bag of AstroTurf in my face. I remember her snaggle tooth saggy smile behind the weed bag like it was yesternight. One night she whomped up some pot brownies—this was early in the relationship—and put on The Cure, and as my ears cleared and my heart opened I thought, what the fuck is this fucking shit? This isn’t music, this is like puking on a silk-ass bathrobe. Saundra laughed her ass off. Had I said it out loud? She was bent over the side of the leather couch and I took in all the curves of her lady- land as if to wallpaper the halls of my future with it. I was high and clear headed. I said, “What? What?” She said, “I know, I know!” She shut it off and I saw that it was daylight and through her red curtains I saw a fragment of a squirrel on the porch railing, its tail doing a kind of foreign snake dance. I thought, what the fuck is this newness? I looked at her and she was seeing and saying it too, and seeing me. Seeing me with these absorbing rotating eyes. For a second there I saw eyes within her eyes. I had never been seen like that. Oh, holy fuck, I went deep quick, kid.

From THE AUTOGRAPH OF STEVE INDUSTRY.  Used with permission of Magic Helicopter Press. Copyright © 2016 by Ben Hersey.

Why We Need Revolutionary Poet Faiz Ahmed Faiz More Than Ever 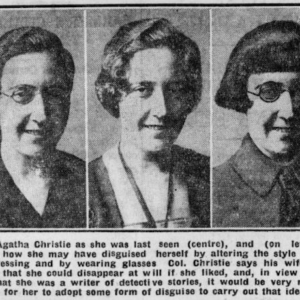 Lit Hub Weekly: November 28 - December 2, 2016 Like many previous Dickinson drops, going back to the eighteen-nineties, they radically alter our vision of perhaps...
© LitHub
Back to top