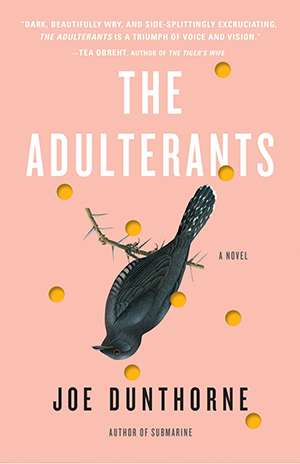 The following is from Joe Dunthorne's novel, The Adulterants. At 33, Ray Morris is finally growing up. He's lived a fairly boring life, never having committed adultery, been arrested, or punched above the neck. But with his wife newly pregnant, he's confronted with a series of catastrophes that will launch him into adulthood. Joe Dunthorne's debut novel, Submarine, won the Curtis Brown prize and was later adapted into an award-winning film by Richard Ayoade.

Throughout our twenties, nobody in our friendship group had been willing to admit they wanted to procreate. It was a shameful, secret pursuit, like skiing. From the age of eighteen to thirty-five, Garthene had taken the combined pill. We used to joke that she had all her unused eggs backed up inside her, and if she ever did come off the pill they’d all come barrelling down at once with a rumbling sound, like when you release the balls on a pub pool table. Then Michael and Kamara’s twins broke the deadlock. The first day we met them they dozed on our laps, pinned us to our chairs with happiness. Garthene, I think I want one. She said she needed more time. She still felt too young. I made the point that, in the eyes of modern medicine, a thirty-five-year-old mother is officially geriatric. And anyway, there was a nine-month built-in waiting time, not to mention the whole conception palaver, which could easily take half a decade, particularly given my lifestyle. All those years with my laptop on my actual lap. Hot baths. Tight trousers. Everything pointed toward a devastated sperm count. Instinctively, I just did not feel fertile. I got myself tested. It turned out that I had a low sperm count but excellent morphology and motility. Quality, not quantity. Garthene came off the pill, not because we were going to try for a baby straightaway but just to check that she too had a healthy reproductive system. Baby steps toward baby steps. We bought a fertility-tracking app called Ovulator. Each morning it asked Garthene whether her cervical mucous resembled water, raw egg white, or school glue. This was a new intimacy, knowing my wife’s inner texture, updated in real time. It messaged us with : – ) on a fertile day and : – ( on the infertile ones. Garthene disapproved of the regressive suggestion that people without children are not happy. I disapproved as well, while privately fearing it true. We had unprotected sex only on the sad days and, just once, very drunk on duty-free schnapps, on a happy day, after which Garthene was immediately pregnant. One and done. Garthene took the news badly. Since drinking alcohol was inadvisable, she went for long walks alone, out across the marshes, gloveless even though it was January, coming back with her hands turned to claws, eyes streaming. For a week, she slept only in two-hour blocks as though road-testing future sleep deprivation. I told her that I would absolutely respect and support her decision, whether she wished to go ahead with the pregnancy or terminate it, and, with this display of loving maturity, I was building a case for myself as a father.

Sitting alone beside the nurses’ station in ICU, I held an antiseptic gauze to my mouth and waited for Garthene. She had broken hospital protocol to let me sit here outside visiting hours. It felt good to be an exception. The ward was dark and calm, just the sound of soft footsteps and ventilators steadily wheezing, the occasional bleat of an IV alarm. It had the atmosphere of a long-haul night flight—low light, interrupted sleep and a psychotic trust in machines. A sign on the wall said Shhhh because noise, particularly human voices, can be stressful in the drugged and paranoid half-dreams of patients on the border of life and death. It occurred to me only now that there were few places less appropriate for my in-depth confession.

“This was a new intimacy, knowing my wife’s inner texture, updated in real time. It messaged us with : – ) on a fertile day and : – ( on the infertile ones.”

I spotted the tall, pillow-lending colleague as he emerged from behind a partition. I tried to catch his eye but he walked politely around me, head lowered, as one might avoid being given a free newspaper. Whether he was silenced by immense guilt or simply busy caring for the very sick was impossible to say.

Eventually, a blue curtain slid aside and Garthene appeared. She sat at the desk across from me, mouthed the words just wait, then started typing with her index fingers. I used this time to observe her in her natural habitat, keeping records, saving lives. In fact, I did not observe so much as gaze upon her. That made her a little awkward and she ran her hand through her hair. I loved that she was already elegantly silvering. Little glints like when you open the cutlery drawer. Her brown hair was so thick that it disguised the rectangularity of her skull beneath. Garthene’s head, at a guess, had the dimensions of a child’s shoebox. I adored this about her and looked forward to our retirement when her hair’s thinning would reveal further nuances. The fact that I would never guess the exact shape was one of the ways in which our marriage would stay fresh. To think my younger self thought your skull resembled a child’s shoebox when now, I see, it much more closely looks like a deflated plastic football that a child has been sitting on.

“Stop looking at me like that,” she whispered, without taking her eyes off the screen.

“It’s just I love you so much,” I said, and even I could tell how poorly I was able to control the volume of my voice.

I rolled my lips inside my mouth.

She found an empty bed on one of the bays. The fresh sheets still showed the grid pattern where they’d been recently folded. In ICU, a newly vacated bed means either someone’s got better or died, health or death. I tried to discern which one this was. Health, I decided, based on nothing. Health.

She pulled a curtain around us. “Don’t speak,” she said.

“You’re probably wondering what happened to my face.”

“I was punched in it for a very good reason.”

She sprayed my mouth with something that tasted of batteries.

“Just tell me in the morning,” she said, her mouth at my ear.

She switched on a bright surgical lamp and hovered it above me. I lay back on the bed, mouth open, enjoying the way the light gave her a halo. As she made the first stitch, I suffered almost no pain, drunk on love and also drunk on alcohol. It was an intimate thing, to feel her at work, tugging tight the dissolvable sutures. I wanted her to sew me up forever. Close the wound, then close my eyes, ears, and so on, all nine orifices, make me whole again. Instead she sent me home.

From The Adulterants. Used with permission of Tin House. Copyright © 2018 by Joe Dunthorne.

Why Do We Still Buy Mass-Produced Souvenirs?

This Thing of Darkness: An Interview With Rachel Ingalls 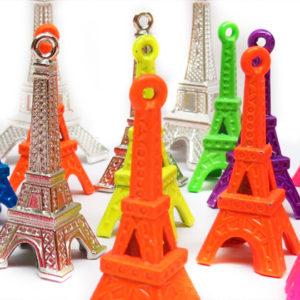 Why Do We Still Buy Mass-Produced Souvenirs? At Par’ici, a souvenir shop located at 52 Rue Mouffetard in Paris, almost every item on offer has something to do with...
© LitHub
Back to top