How Julia Zarankin Found Herself in Franzen Territory

Fifteen years ago, I accidentally became a birdwatcher. I didn’t just start watching birds calmly: they engulfed my world, my bookshelves, my vocabulary, my jokes and even my aesthetic sensibilities. My unlikely transformation is the subject of my first book, Field Notes from an Unintentional Birder. I haven’t yet succumbed to the multi-pocketed vest, but I’m no longer ruling out the possibility.

For me, books came before birds. Even before binoculars. I had lived a fully indoor life until I was in my mid-thirties. My family immigrated from the former Soviet Union, and the last thing my parents wanted to do in Canada, their newly adopted country, was embrace the outdoors; instead, they gravitated toward concert halls, museums, libraries. The outdoors, they believed, were for other people. And then, in the midst of a career transition, I found myself auditioning hobbies.

I tried them all—pottery, book-making, yoga, aqua-aerobics—and then I happened upon the last essay in Jonathan Franzen’s Discomfort Zone while browsing in a bookstore. Titled “My Bird Problem,” the essay spoke to me with uncanny clairvoyance, and at the end of the 20 or so pages, I had decided that my only way forward in life would be to develop a bird problem of my very own. As I read and reread the essay, I started to see a passion for birdwatching as one of the keys to developing hope both for this planet of ours and for human relationships as well. Franzen articulates his “bird problem” as the feeling of being unable to ignore “not the world’s falling apart in the future, but my feeling inconveniently obliged to care about it in the present.” But for me, my bird problem was about to be something different, with even higher stakes: a new lease on life.

The only problem was that I still hadn’t seen a single bird. Through Franzen, I first heard about Phoebe Snetsinger, and immediately bought her memoir Birding on Borrowed Time, published posthumously after her unexpected death in a car accident on Madagascar, while trying to see her 8398th bird species. Snetsinger’s singular determination (read: obsession) to see as many of the world’s birds as possible after a dire cancer diagnosis at age 50 spoke to me in a way that I hadn’t expected: birds and birding afforded the potential to reinvent your life on your own terms, which was exactly the prescription I needed at that point in my life (even though I glossed over much of the actual descriptions of birds).

The more I thought about birds, the more they began appearing in everything I read.

Just as I finished Snetsinger’s memoir, Olivia Gentile published the riveting biography of Snetsinger, Life List: A Woman’s Quest for the World’s Most Amazing Birds. The book put Snetsinger’s life in context, provided depth, nuance and complexity to this single-minded woman’s obsessive desire to amass the world’s largest life-list of bird sightings. Snetsinger’s life was in many ways a race against time—not only due to her terminal diagnosis, but also making up for lost time she faced as a woman coming of age in the 50s where even a brilliant transcript from Swarthmore, and serious scientific potential, offered her nothing beyond the expectation to marry well and raise a family.

From Snetsinger and Gentile, I learned about “spark birds”—the sighting that sets your love of the avian world in motion, that demarcates a before and after, that ignites your desire to see more—and decided that I needed to acquire one of my own. And so I found a bird group in the area, but unlike Snetsinger, I didn’t fall for a flashy, sexy spring migrant with a fiery orange throat and a migratory path that makes the most intrepid of travelers queasy (the blackburnian warbler); mine turned out to be the commonest of backyard birds, the red-winged blackbird. I turned to Kenn Kaufman’s Kingbird Highway before I knew anything beyond the mesmerizing effect of that red-winged blackbird that haunted my thinking with its exquisite crimson epaulets that didn’t match its grotesque, crackly call. I would return to this book again and again over the course of the next ten years, each time armed with more knowledge of the bird world, and even more impressed by Kaufman’s ability to capture the feeling of what it means to be on the cusp of a new life without ever veering into sentimentality, or losing track of ornithological precision.

Just as I started looking up more regularly, only to realize how much of a challenge this new hobby would be, I found Simon Barnes’ How to be a Bad Birdwatcher, which gave me permission to accept that I would be an eternal beginner birder who excelled at misidentifications and the occasional great avian coiffure assessment. The point of my love-affair with birds wasn’t to attain a level of perfection, but rather to let myself enjoy the process of getting to know their fantastically curious behaviors and plumages. It turned out that, as with life, there is no right way to be a birder, and being “bad” at something doesn’t necessarily make it any less enjoyable or worthwhile. In a sense, Barnes’ book offered me a lesson in how to live more…happily.

Sure enough, the more I thought about birds, the more they began appearing in everything I read. While teaching a course to lifelong learners about Anton Chekhov, I started to pay closer attention to the natural world in his stories and plays, to the environmental disasters he witnessed around him and to his calls to action against habitat destruction. Birds populated his stories and bore witness to life in all of its forms, from the mundane to the horrific; we hear the “mournful, muted cry” of the bittern in the devastating story “In the Ravine” and in Uncle Vanya, the servant, Marina, keeps feeding the chickens on the estate as the world disintegrates around the characters. Chekhov’s birds are a sign of persistence and resilience, and in that way, to me, they point us toward a form of hope (but never redemption).

If it hadn’t been for the birds in books, I never would have been inspired to look up.

Although I made valiant (read: futile) attempts to learn birdsong by memorizing mnemonics, listening to recordings and downloading apps with every persuasion of bird song quizzes, it wasn’t until I read Don McKay’s “Chickadee Encounter” (Apparatus, 1997) that I began to internalize the bird’s song: “it’s practically pauseless,/but as though some big machine—/domestication maybe—hiccuped,/a glitch through which the oceanic/thirsts of poetry pour.” And song of the wood thrush crystalized in my mind after reading McKay render it as “a sorrow that’s so old and silver it’s no longer/sorry.” Only when McKay described it as “a place/ between desire and memory, some back porch/ we can neither wish for nor recall” could I properly associate what field guides referred to as its “flute-like call.” The sounds in the field gained meaning for me through poetry.

I came across Meera Lee Sethi’s Mountainfit (originally published by CCLap in 2013) just after holding a bird in my hand for the first time: each chapter charts her experiences volunteering in remote bird observatory in Sweden, but also uncovers, in miraculous detail, what it means to collide with a new way of seeing and being in the world. The book gave me the confidence to volunteer at a bird banding station and ultimately see the pursuit of birds as a way to find my own wild side.

I did in fact develop a bona fide bird problem, but it began with literature. If it hadn’t been for the birds in books, I never would have been inspired to look up. 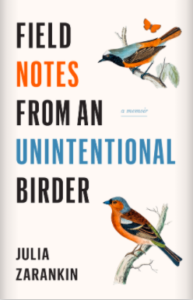 Field Notes from an Unintentional Birder by Julia Zarankin is available via Douglas & McIntyre.

Julia Zarankin is a writer and a self-proclaimed birdsplainer with a particular fondness for sewage lagoons. Her writing has appeared in The Walrus, The Letters Page, Cottage Life, Orion Magazine, Threepenny Review, Prism International, Maisonneuve, The New Quarterly and The Globe and Mail. She was a finalist for the CBC Short Story Prize (2020) and Field Notes from an Unintentional Birder is her first book. 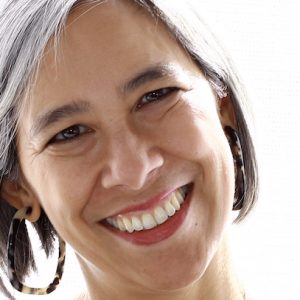