When Lawrence Ferlinghetti died this week at age 101, nearly one month shy of his 102nd birthday, many of my friends, even writer friends, expressed surprise on social media. I didn’t even know he was still alive!

Indeed, Ferlinghetti outlived all the younger Beat writers he once published, including Jack Kerouac, William Burroughs, Allen Ginsberg, and Greg Corso. When The New York Times, in a 2005 interview, asked him why, he answered, “Kerouac drank himself to death, and Burroughs, when he was young, thought the healthiest person was one who had enough money to stay on heroin all his life. I really never got into drugs. I smoked a little dope, and I did a little LSD, but that was it. I was afraid of it, frankly. I don’t like to be out of control.”

But for me, and a segment of San Franciscans and aspiring bohemians worldwide, Ferlinghetti seemed immortal; we found comfort in this. As many of us have been wringing our hands over what might become of the soul of the city, or the role of the writer in society, we could always say, There’s City Lights!, a sentinel in North Beach, one of the few neighborhoods in the city that still feels as it once did. The bookstore isn’t only one of the best known in North America—in 2001 it was officially declared a landmark—it’s also one of the most beloved. In the early months of the Covid-19 pandemic, City Lights closed and started an online fundraiser, announcing they might not reopen. The store received more than $450,000 in four days.

When Ferlinghetti first opened City Lights in 1953, North Beach was still mostly Italian. “We used to get some Italian anarchist newspapers direct from Italy,” he told Interview magazine. “And the Italians on the garbage trucks would pull up in front of the store and rush in and get their copies.” His original partner, Peter Martin, was the son of Carlo Tresca, the famous editor and labor organizer who was assassinated by mafia in New York City in 1943.

But Ferlinghetti’s influence reaches well beyond that of the store he founded. As poet and publisher, Ferlinghetti challenged the literary elite’s definition of art and the artist’s role in the world.

In 1955, he launched the City Lights publishing house, devoted to publishing avant-garde books. And in 1957 he took on obscenity charges with the publication of Allen Ginsberg’s Howl and Other Poems after San Francisco local police arrested Ferlinghetti, and a City Lights clerk, Shigeyosi Murao,

charging them of having sold an “obscene book.” The American Civil Liberties Union defended Howl, bringing a series of recognized artists and literary authorities to testify to the poem’s merit and worth.

“It is not the poet but what he observed which is revealed as obscene,” Ferlinghetti said in the poem’s defense. In a landmark first amendment case, the judge ruled in Ferlinghetti’s favor and Howl and Other Poems became a bestseller.

Through his work as publisher and writer, Ferlinghetti was also instrumental in bringing poetry out of the academy and back into the public sphere with readings and political activism.

This spirit of the hip outlaw infused the neighborhood, and Ferlinghetti was the source of this infusion.

Along with Ginsberg, and other progressive writers, he took part in events focusing on issues including the Vietnam War, the Cuban revolution, the nuclear arms race, the United Farm Workers of America, the murder of Salvador Allende, the Sandinistas in Nicaragua, and the Zaptista Army of National Liberation in Mexico. In an interview with the San Francisco Chronicle he said about his time serving in the war, “Seeing Nagasaki made me an instant pacifist.”

San Francisco was alive with poetry and protest in the 1970s and early 80s when my father, queer poet Steve Abbott, was an active writer and editor. Events took place not just at City Lights, but at cafes and bookstores throughout the Bay Area, including Cody’s Books in Berkeley, The Grand Piano Café in the Haight, and the Cloud House in the Mission. (Of these only City Lights still stands). My dad then served as editor of Poetry Flash, a periodical tracking and reviewing Bay Area poetry. With him being a single parent and me his only child, I tagged along most nights, whether he was reporting on the readings or taking part himself. Even that “poet voice,” which so many describe as annoying, is as comforting and familiar as a lullaby to me. Especially as it was often accompanied by live music.

It was Ferlinghetti who pioneered poetry and jazz experiments. “A Coney Island of the Mind,” published by New Directions in 1958, included a series of poems to be read aloud accompanied by jazz performance. The title of the collection, taken from Henry Miller’s “Into the Night Life,” represented what Ferlinghetti called “a kind of circus of the soul.”

The voice in these poems is that of the “everyman,” and reflected Ferlinghetti’s populist consciousness. His poem “Autobiography” begins:

The result made Ferlinghetti one of one of the most widely read poets in America. “A Coney Island of the Mind” has been translated into nine languages, and is, according to City Lights, one of the best-selling poetry books of all time. Much of Ferlinghetti’s writing grew out of his journals and notebooks.

As a teenager I wanted to approximate the idea of the notebook-wielding artist. I would ride the bus from our ratty Haight Ashbury one-bedroom apartment into downtown and then walk to North Beach. There I would explore the San Francisco Art Institute and then scribble in my journal in Caffe Trieste while drinking Earl Grey tea. At City Lights I could find my dad’s poetry books, and also all sorts of books appealing to wannabe anarchists. This spirit of the hip outlaw infused the neighborhood, and Ferlinghetti was the source of this infusion.

City Lights Bookstore still feels like a holy place, and is a necessary stop whenever I return to the city.

Although considered a central figure in San Francisco, Lawrence Monsanto Ferlinghetti was born in Yonkers, New York. In “Literary San Francisco,” he wrote: “I grew up with the firm view that nothing west of the Hudson really existed. And in that New Yorker’s demented map of America, there was a high island sticking up at the far western edge of the great American slough: San Francisco.” Describing himself as “one of those literary carpetbaggers,” he wrote that the city first appeared to him “like an island, vaguely Mediterranean, with its white buildings, a little like Tunis from the sea, not really part of America.”

His French and Italian immigrant parents, Carlo Ferling and Clemence Mendes-Monsanto met at Brooklyn’s Coney Island. His father, an auctioneer from Northern Italy, changed his name from Ferlinghetti to the less ethnic-sounding Ferling on his arrival in America. He died seven months before Ferlinghetti was born. Soon after, Ferlinghetti’s mother entered a state hospital, leaving her five sons in the care of family. Ferlinghetti’s great aunt took him to Strasbourg, France to live for five years. He learned to speak French before he could speak English. When she returned with him to New York, her marital problems forced her to place Ferlinghetti in the care of a wealthy couple, who raised him in Bronxville, New York. There he took printing press courses, delivered newspapers, and played basketball. He was both boy scout and rebel. In his poem Autobiography he wrote of these years:

I got caught stealing pencils
from the Five and Ten Cent Store
the same month I made Eagle Scout. (Coney, 60)

While hitchhiking and riding the rails through Mexico one summer with friends, he discovered the populist writers Carl Sandburg, Edgar Lee Masters, and Vachel Lindsay. After a four-year tour in the navy, Ferlinghetti settled in NYC, where he pursued a masters at Columbia and circulated among the intellectuals of Greenwich Village. In 1947, he moved to Paris to complete his doctoral degree at the Sorbonne and later married Selden Kirby-Smith, aka “Kirby,” a Swarthmore graduate he met on a boat ride from New York to Paris. Together, they moved to San Francisco, where he taught French, wrote art criticism and kept a painting studio. Friendships with Kenneth Rexroth (a focal figure for West Coast poets and activists) and Peter Martin (of City Lights magazine) spurred the development of his own writing. Listening to community radio KPFA spurred his social conscience.

In 2003, Ferlinghetti was made a member of the American Academy of Arts and Letters. In 2005, he received a lifetime achievement award from the National Book Foundation. Although “Coney Island of the Mind” is Ferlinghetti’s most enduring work, he published novels, plays, travel journals and other writing. In 2017, he published new poetry in the anthology “Ferlinghetti’s Greatest Poems.” In 2019, Doubleday published Ferlinghetti’s “Little Boy,” a book he’d been working on for two decades. Its publication coincided with Ferlinghetti’s 100th birthday. Though he stayed home that day, the streets outside City Lights filled to celebrate him, with poets like Robert Hass, Guillermo Gómez-Peña, and Ishmael Reed reading aloud from his work.

City Lights Bookstore still feels like a holy place, and is a necessary stop whenever I return to the city. One of the greatest days of my life was launching Fairyland, a memoir of my father, at the bookstore in 2013. The upstairs poetry room where I read was at capacity. It was mid-June and hot. The stairwell leading up to the room crowded with people sitting on the steps or leaning against the wall. The reading felt like a homecoming. Even elder Beats like Jack Hirschman attended. City Lights was thick with Ferlinghetti’s beatific energy that night. Let that spirit continue to reign over North Beach and San Francisco and the lives of so many poets who are being born every day.

Alysia Abbott's work has appeared in Real Simple, Salon, and TheAtlantic.com. She is a graduate of the New School's MFA program and was a contributing producer at WNYC radio. She lives in Cambridge, Massachusetts, with her husband and two children. She is the author of Fairyland, A Memoir of My Father (Norton).

When a Young Literary Star Refuses the Spotlight 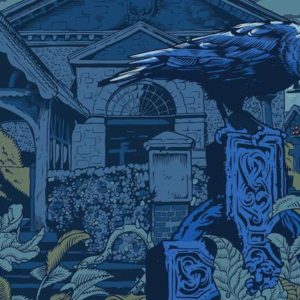 The stories I like best feel like seductive nightmares. You are drawn against your will through a spontaneous performance...
© LitHub
Back to top