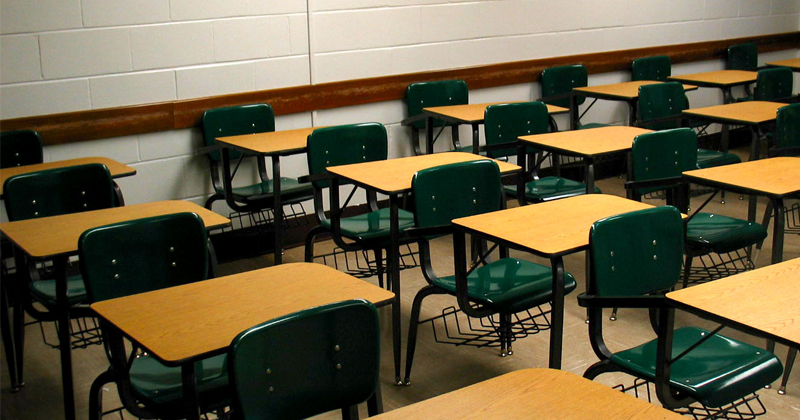 Zachary Lazar on a Writing Class of Undergraduate and Incarcerated Students

If Something is Worth Doing…

We’ve arrived after a two hour drive from New Orleans and stand waiting outside the prison’s locked foyer, but one of my students is told she can’t go in because her clothing is too revealing. It’s a Saturday in January, the first day of an introductory creative writing course that will include eight Tulane students and eleven students incarcerated here at the Lafayette Correctional Center. Most of the class takes place online, by video conferencing, but we also we make three of these visits during the semester. A prison administrator finds a long coat in her car that she gives to the underdressed student, and with her in this new disguise, we’re finally buzzed in through the double doors. Escorted by correction officers, we walk alongside a large outdoor gym to the cafeteria, where the incarcerated students are waiting for us. They’re seated in a single line at a row of tables, the four women in orange, segregated from the seven men, who wear gray prison sweatshirts and gray pants. I urge the Tulane students, who are dressed like they’re going to watch a football game or a concert on the green, to sit in the empty row of seats across from the inmates. No one knows yet how to greet each other or even how to look at each other. I realize that I’ve forgotten how I did this last semester and the semester before that, how I managed to make it so that the Lafayette students and the Tulane students were not separated. I stand there in the silence, taking out my materials and laying them out in front of me, then I introduce myself.

I start with a prop, a copy of my newest book, which, I tell them, was inspired by a week I spent at Angola prison in 2013 as a journalist. I’ve told this story so many times that it feels rote to me, but I try to remember that it’s not rote to the students, who are hearing it for the first time. When I was at the prison, I say, I was struck by how many talented and thoughtful people I met. Some of them have been my friends for five years now, including one who wrote a novel that I found a publisher for. That’s why I wanted to start a class like this. I consider it to be a part of the same “art project” I embarked on five years ago.

“I’m not a bleeding heart who wants to save the world,” I say. “Well, actually I am, but I’m not only that.”

We Tell Ourselves Stories in Order to Live

I write about violence and its ramifications—that’s my subject. There’s a simple reason for this, which is that when I was six years old, my father was murdered. When I tell people this story, I’m always oversharing. It’s always awkward. There’s a temptation to apologize or make light of it somehow, but I’m telling this story now for a reason: it’s a story about the importance of stories. I show the students another prop, another book I wrote, Evening’s Empire: The Story of My Father’s Murder. The book as a prop is a way of defusing the subject’s shock value, also of deflecting sympathy, which I don’t want. The murder happened. I didn’t choose my father’s story, his story chose me. By writing it, I gained a measure of control over it as well as a deeper understanding.

The students’ faces are no longer blank, they’re intent in a way that I recognize, especially some of the incarcerated students, whose faces are emotional in a way that is hard to read. Maybe ten minutes have passed, probably less. I make a joke about how I can be a little intense sometimes.

I go on to say that when you’re six years old and your father is murdered, among other things it’s confusing—everything you thought you knew about the world is now in doubt. Whatever story you were telling yourself about how life was supposed to work now has to be replaced by a different story. I say that one reaction you might have to such violence is to want revenge. I was six years old. I wasn’t going to get revenge. In fact, no one was ever even tried for my father’s murder. Instead of revenge, I began to ask questions. Like, why does evil exist? And beyond that, since it does exist, why is there also more to people than just evil? Why are people also full of kindness, generosity, love?

My seventh grade science teacher said that. I think about it all the time now that I’m a teacher myself. I realize now that I forgot to have the students introduce themselves. I make a joke about my absent-mindedness. Then we go around and all the students say their names and tell us a little bit about where they’re from. They’re all embarrassed about where they’re from, all for different reasons. A woman from Scott, Louisiana, says that Scott is the “Gateway to the West,” and I ask her what that means and she doesn’t know. No one knows. In Crowley, there’s something called the International Rice Festival—everyone’s heard of that except for the Tulane students and me, so the Louisianans laugh at us. It turns out there’s a punk rock scene in Lafayette, a hip hop scene in Franklin. In the classes I’ve taught here before, I’ve had rappers, Cajun and zydeco musicians, visual artists whose medium is usually the tattoo. The strong and wholly inaccurate first impressions we made of each other at first sight are now starting to give way to something closer to the truth.

“They all know a lot about poetry from the music they listen to, from song lyrics, even if they don’t read much poetry on the page.”

What always surprises me is how easy it is to get the students from Tulane and the students from Lafayette to talk to each other if I just let them do it. The first time I taught this class, two semesters ago, I brought along ideas about how to break the ice, but in the time it took me to look at my notes, the ice was already broken. The same thing happens now. I ask the administrators if we can mix everyone up instead of having them all separated, and they say yes, so we rearrange the seating and within a few seconds everyone is smiling and talking. It happens so fast that I don’t see how it happens.

I pass out some poems now by Marie Howe, Denver Butson, and Morgan Parker. I tell them they all know a lot about poetry from the music they listen to, from song lyrics, even if they don’t read much poetry on the page. I want them to notice how poetry on the page works differently—how it has no music or beat to enhance the words, just the flavor and meaning of the words themselves.

Write a poem in the language of your own time and place. That’s the first assignment. Since none of us was born in England in the 1500s, I say, it would be stupid to try to write in the language of Shakespeare. I tell them about Dante inventing Italian literature by eschewing formal Latin in favor of lowly Italian, the language of the street. The first assignment, I go on, is to embrace where you come from, to not belittle or demean it or pretend it’s unimportant. As the students stare down at their handouts, I remember something Porche, my driver, said as we drove over from New Orleans. She said she works hard to convince people of color like herself to do their jury duty, to not try to get out of it (their reluctance is not inconvenience, she told me, but an unwillingness to play a part in a system that puts so many people behind bars). They should serve, Porche told me, because a black juror can hear black language in a way white jurors sometimes can’t. It brought to mind a recent decision by the Louisiana Supreme Court regarding a suspect, who, when questioned by police, said, “If y’all think I did it, I know that I didn’t do it, so why don’t you just give me a lawyer dog ’cause this is not what’s up.” The court found this could be interpreted as a request not for representation, but for a dog—a canine lawyer, to be precise. They ruled the defendant had not invoked his right to an attorney.

I tell the class now that the world we live in is full of images and stories that we are mostly unconscious of, disseminated by TV, movies, the internet, advertisements, and that many of these images and stories are aspirational, making us want things we don’t have, be things we can’t be. Someone makes up these desires, but how many of the people who make them up live in Crowley, or Scott, or Lafayette?

The last prop I’ve brought along is a copy of the literary magazine we made in the class last semester. On the cover is the image of the tarot card “The Magician.” One of his hands points to the ground, the other is raised to the sky, and before him are the symbols of the four elements—earth, air, fire, and water—the opposites that he will try to reconcile. Above his head is an infinity sign, and on his waist is a snake biting its own tail, the ouroboros, a symbol of eternity. As I told the class last semester, the magazine will last for eternity, as long as you don’t lose it or throw it away. A stranger, opening to the table of contents, would have no way of knowing which of the listed authors is incarcerated and which is not. There are stories of drug abuse, sexual abuse, violence, and the joy of getting high, and there are stories about family life, about Super Bowl Sunday in Opelousas, with rice dressing and crawfish, and there are stories about losing parents, or realizing you’re gay, or raising animals on a farm, or harvesting ginseng in the Appalachian mountains. Some of the incarcerated writers have been to college themselves, while others never made it past the eighth grade. One of them wrote a weird story about buried doubloons, Jean Lafitte, and the ghosts of slaves. Another one wrote an even weirder story that starts with Hurricane Katrina and ends with Tupac Shakur still alive and living incognito in the Bahamas.

We’re still at the very beginning of the semester, so it’s impossible to know what’s to come.

Here’s a picture from last semester, the graduation ceremony—the moment when everyone sees his or her work in print for the first time, a moment in which no one is bored by who they are but surprised by what they made. 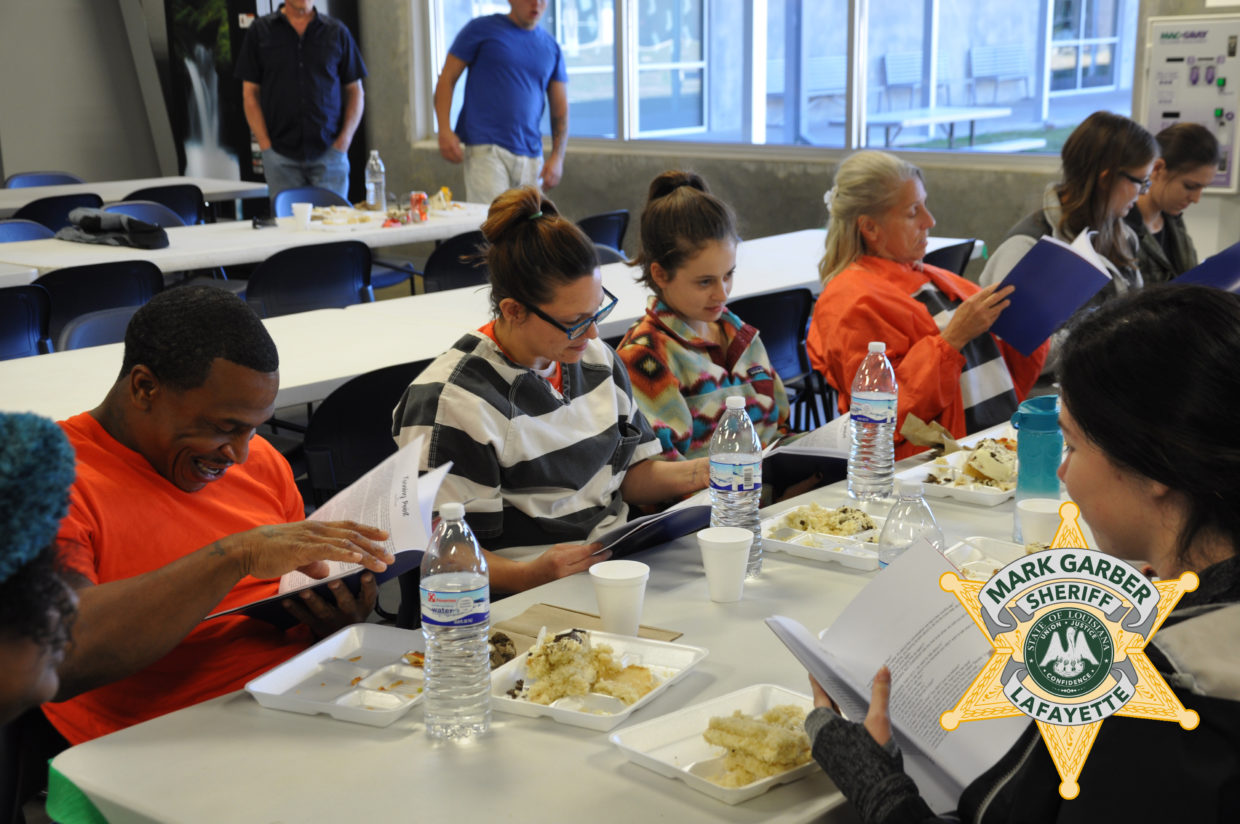 Zachary Lazar is the author of Vengence. His previous books include the novel Sway, chosen as a Best Book of 2008 by the Los Angeles Times, Rolling Stone, Publishers Weekly, and Newsday, and the memoir Evening’s Empire: The Story of My Father’s Murder, a Chicago Tribune Best Book of 2009. Lazar is the recipient of a Guggenheim Fellowship, the Hodder Fellowship at Princeton University, and, most recently, the John Updike Award from the American Academy of Arts and Letters for “a writer in mid-career whose work has demonstrated consistent excellence.” He lives in New Orleans.

Before There Was YA, There Were Horse Books 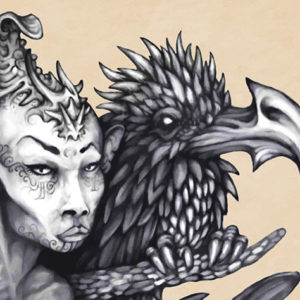 Sofia Samatar is a writer of great vision, enchantment, and exhilaration. Author of the linked novels A Stranger in Olondria and The...
© LitHub
Back to top
Loading Comments...