This week in literary film and television news, it was all about beginnings—and one ending that is also, hopefully, a beginning. We got word of a bunch of new literary film projects, like Ta-Nehisi Coates and Ryan Googler’s adaptation of a legendary Rachel Aviv New Yorker piece, news about film versions of YA novels both new and old (and in the case of Mary Poppins Returns, quite old), more Dark Tower stuff, and Jake Gyllenhaal on an adventure as a WWII fighter pilot. As far as that ending goes, it seems the impossible has happened: Terry Gilliam has actually finished principal photography on his Don Quixote-inspired film. Fingers crossed that means it will actually reach us one day—but considering the trajectory this film has had so far, I wouldn’t bet the horse on it.

Ta-Nehisi Coates is writing the script for Wrong Answer, a film based on Rachel Aviv‘s 2014 New Yorker piece of the same title, which detailed the scandal that ensued after Atlanta middle school teacher Damany Lewis changed students’ standardized test scores in an effort to meet the institutional standards (via No Child Left Behind) that would keep the school from being closed. Ryan Coogler (also the director of the Marvel film adaptation of Coates’s Black Panther) will produce and Michael B. Jordan will star as Damany Lewis. This is a fascinating, complicated story, and we should all be glad it’s in Coates’s hands.

Distributors—Annapurna, Netflix, Amazon, and Focus among them, according to Deadline—are currently bidding for Boy Erased, the adaptation of Garrard Conley‘s 2016 memoir about his experiences in a conversion therapy program. Joel Edgerton has written the script and will direct and star alongside Lucas Hedges. Whispers about Russell Crowe and Nicole Kidman as supporting players, but no confirmation yet.

Production has begun on the film adaptation of German author Cornelia Funke‘s best-selling 1997 children’s novel Dragon Rider. The film will be the full-length feature debut for director Tomer Eshed, based on a script written by Johnny Smith, who, just by the way, was also one of the writers on Gnomeo & Juliet, another—ahem—literary film.

Taking bets on what the next mega-smash YA film adaptation might be? Consider The Hazel Wood, by Melissa Albert, forthcoming from Flatiron Books in January 2018. Columbia Pictures has picked up the rights to the book, and Doug Wick and Lucy Fisher, who produced the Divergent films (based on the novels by Veronica Roth), are already on board. Sure, Divergent wasn’t exactly The Hunger Games—but every tween you know probably still saw it.

Dying for a peek at Emily Blunt as Mary Poppins? Mary Poppins Returns, which picks up 25 years after the classic film (based, of course, on the classic P.L. Travers novels), isn’t coming until Christmas 2018, but EW has some exclusive photos to share. Looks magical, but with Blunt and Lin-Manuel Miranda, how could it not be?

Gilmore Mom Lauren Graham has recently optioned Windfall, a YA novel by Jennifer E. Smith, to be adapted into a feature by her production company, Good Game Productions. You may have noticed that Lauren Graham’s name is in bold—well, perhaps you’ve forgotten that she too is a novelist: she published Someday, Someday, Maybe in 2013 with Ballantine Books as well as a memoir last year.

Jake Gyllenhaal is taking to the air—but not for long. The actor will star and produce alongside Oscar-winning producer John Lesher in an adaptation of The Lost Airman: A True Story of Escape From Nazi-Occupied France, by Seth Meyerowitz, for Amazon Studios. The book is a biography of U.S. Air Force Staff Sergeant Arthur Meyerowitz, the author’s grandfather, whose plane was shot down over France in 1943, where he hid with a French resistance group for over six months before making his escape.

After 17 years of struggle, principal photography has officially wrapped on Terry Gilliam’s much-plagued poster-child for “development hell” The Man Who Killed Don Quixote, based (loosely) on the classic by Miguel de Cervantes. “We’ve been at it so long that the idea of actually finishing shooting this ‘clandestine’ film is pretty surreal,” Gilliam said in a statement. “Any sensible person would have given up years ago, but sometimes pig-headed dreamers win in the end, so thank you to all of the ill-paid fantasists and believers who have joined to make this longstanding dream a reality!”

No new trailers this week, but we have seen a few new TV spots for the forthcoming adaptation of Stephen King‘s The Dark Tower. Read: below, you may ogle Idris Elba as he saves the world from darkness! Here’s the best one for newbies: 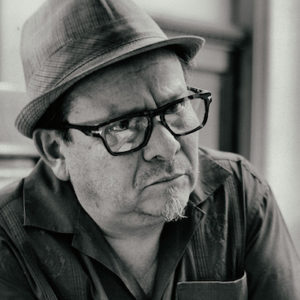 An anomaly among contemporary Mexican writers, who mostly come from resolutely privileged backgrounds, J.M. Servín is an autodidact...
© LitHub
Back to top