The Author of For the Love of the Dollar on Work, Xenophobia,
and the Writing Life

An anomaly among contemporary Mexican writers, who mostly come from resolutely privileged backgrounds, J.M. Servín is an autodidact who never went to high school. His novels tend to take place in the streets of the roughest neighborhoods of his native Mexico City—also in contrast to many of his counterparts, who often set their metafiction in imaginary versions of Europe and Asia or in unnamed generic cities that largely remain undescribed. In his first novel, Cuartos para gente sola, Servín describes a world of clandestine, back-alley dog fights—over a year before the film Amores perros, which showed a similar world, was released. His dystopian novel Al final del vacío depicts a Mexico City in the near future that is alarmingly similar to the one that over 20 million people live in today.

In addition to fiction, Servín is also a prolific author of what is known in Mexico as la crónica (chronicle), a loose-limbed form that tends to combine elements of literary journalism and memoir. His first book to be published in English, For Love of the Dollar (Unnamed Press), belongs to this genre.

The true story of Servín’s seven-year sojourn as an undocumented immigrant in the tristate area in the 1990s, it doesn’t fit any of the predominant stereotypes about Mexican immigration to the other side of the border. Servín’s residence in the US was an extended sordid joyride, through dive bars, peep shows and all-night diners. These are where he passed his idle hours while working as a maintenance man in a Connecticut golf club, a dishwasher in a midtown Manhattan restaurant, and pumping gas at a Mobil station (where judicious snorts of cocaine, and slugs from a flask in his pocket, helped to alleviate the winter cold).

David Lida, an American writer who has lived in Mexico City since 1990, has been a friend of Servín’s for about 15 years. The two recently talked about Servín’s work, Mexican and US immigration policy, and day jobs.

David Lida: In the 20th and 21st centuries, a parade of writers from the US and the UK have written books about, or that take place in, Mexico. Meanwhile, very few Mexican novelists or journalists have written about the US. Why the disparity?

J.M. Servín: With the exception of Guillermo Prieto, who wrote Viajes a los Estados Unidos between 1877 and 1878, I don’t know many writers who’ve done anything with that theme. I have the impression that many Mexican writers are insular and obsessed with what happens in their own city or region. When Mexican writers leave the country with grants from institutions or as cultural attachés, they seldom penetrate other realities from dynamic experience. Maybe it’s also because of the hypocritical posture that many Mexicans assume, faking antagonism against a culture that has influenced all of us and whose lifestyle attracts us all. In Mexico, it’s good business to appear to be a nationalist.

DL: Your experience as an undocumented immigrant doesn’t fit the predominant clichés, of someone starving to death working 14 hours a day at a job Americans don’t want. Do you believe your experience, as described in For Love of the Dollar, is representative of other undocumented Mexicans in the US?

JS: My experience is impregnated with a spirit of adventure inspired by US pop culture: soul, funk, bebop, New Journalism, the Beats, Henry Miller, Ralph Ellison, Truman Capote, Herman Melville, bourbon, blondes, film noir. My precarious economic situation in Mexico gave me the definitive push to leave behind what I saw as a stingy and fucked-up country.

DL: For decades, the presidents of the United States have promised the Mexicans an immigration policy that’s more coherent and permissive. Obviously, none of them have fulfilled that promise and, under the Obama administration, more people were deported by far than in any of the previous presidencies. Do you think that Trump, by satanizing Mexicans as criminals and rapists, is a little more honest and less hypocritical?

JS: He is more honest because the US government has always thought that way about the Mexicans. Trump speaks to the collective unconscious of the white majority that has never accepted anyone else’s differences. Aside from that, Trump isn’t doing anything for which the Mexican government hasn’t historically paved the way. The Mexicans are most despised by the politicians who govern them. The Mexican government has historically avoided its responsibility to its people by turning immigrants into heroes, and the gringos take advantage by turning these Mexican “delinquents” into a bargain-priced work force.

DL: Many US politicians make a lot of noise about external enemies—be they Mexicans, Muslims, the Vietcong or the Mara Salvatrucha—as a way of creating a smokescreen to cover up the enemies within. What do you think when you look at the panorama of the US now?

JS: I believe the US is disintegrating into a polyhedron of communities with their own identities and ideological beliefs, which increases the historical paranoia against migrants. The gringos are more and more lustful and addicted to whatever makes them avoid feeling responsible for the chaos they’ve sown throughout the world.

Lida What are you reading right now?

Servín The social history of crime in 20th-century Mexico, the stories of Lucia Berlin, tabloid newspapers, medical reports of patients with terminal illnesses, and, due to nostalgia from my childhood, a book of Russian tales. It was the first book that strongly influenced my imagination.

Lida If someone who’d never read a book written by a Mexican asked you for recommendations, what would be on your list?

Servín The Bandits from Rio Frio by Manuel Payno, The Underdogs by Mariano Azuela and the trilogy of horror by Sergio González Rodríguez: Huesos en el desierto, El hombre sin cabeza and Campo de guerra. [Rodríguez’s The Femicide Machine and The Iguala 43 were published by Semiotext(e).]

Lida Which contemporary Mexican writers do you admire?

Servín. Sergio González Rodríguez, who just died. He was a panopticon of ideas, attitude and lucidity to understand the last 40 years in Mexico. As for the rest of them, I’m not much interested in anything contemporary. Unless we’re talking about women.

Lida From other countries?

Servín James Ellroy, above all. Horacio Castellanos Moya. Thanks to my wife, the writer Bibiana Camacho, I discovered Lucia Berlin. Emmanuel Carrère. But as you can tell, in general it’s not my way to hunt for shooting stars. Almost everything I admire is from the past.

Lida Which authors have been most influential for you?

Lida In For Love of the Dollar, you describe a marginal life, and desperately boring jobs that you did to survive. Can you get by from your writing or do you need to do other jobs to survive?

Servín I had a better time in those days than now, and I made decent money. I get by from my writing—once in a while I get some royalties, and I was given a couple of writer’s grants from the government, and from time to time I’m hired to write a piece for a magazine that pays decently, if belatedly. But if it wasn’t for my wife, who has a day job, I’d probably be filling out a job application at this very minute.

Lida Can you talk about what you’re writing now?

Servín A testimonial novel in which I go over the story of my family and the everyday crime of Mexico in the 1970s and 1980s. It’s the most ambitious thing I’ve ever tried.

Lida Aside from the US, for some years you lived in Paris—not as an undocumented worker, but married to a Frenchwoman, with all of your rights and privileges intact. Those of us who admire For Love of the Dollar would like to read a sequel about your experiences in France. Have you thought about writing it?

Servín I’ve written a part of it already. I’ll finish when I extricate myself from this great emotional and formal conflict that I’ve gotten myself into by working on the novel I mentioned in the previous answer.

David Lida is the author of, most recently, the novel One Life. 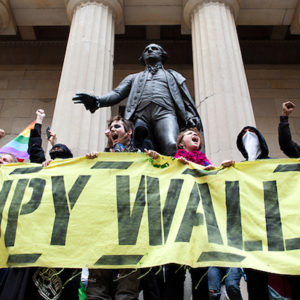 It’s been over five years since Occupy Wall Street first entered the public consciousness, with a lengthy stint in lower...
© LitHub
Back to top