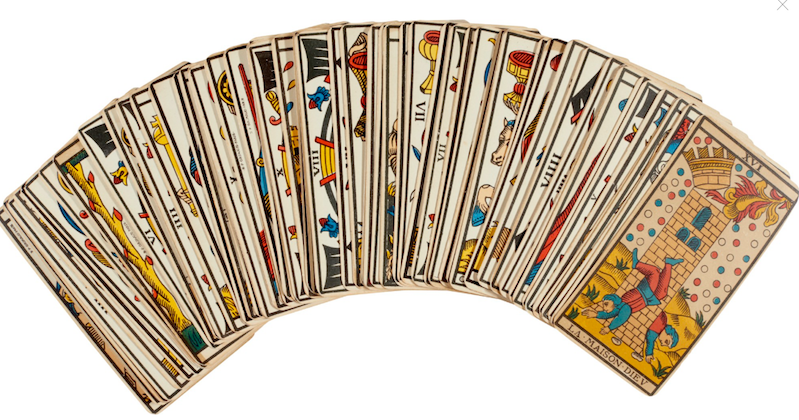 The Tarot de Marseille deck, gifted to Plath by Ted Hughes on the occasion of her 24th birthday, sold earlier this afternoon at a much-ballyhooed online auction (somewhat creepily titled Your Own Sylvia) conducted by Sotheby’s London.

The hot ticket deck (which was expected to fetch somewhere between $6,000 and $9,000) was part of a 50-item trove that included Plath and Hughes’ gold wedding bands, which sold for nearly $38,000; more than a dozen love letters from Plath to Hughes dating from the rosy early days of their marriage; a set of recipes; and a family photo album. All in all the Plath/Hughes reliquary, sold by the poets’ daughter Frieda Hughes, netted over $1 million.

I’m a little surprised that Plath’s wedding ring didn’t generate as robust a bidding war as the tarot deck (you can wear a ring, after all) but, then again, tarot and the occult did inspire some of Plath’s most famous work, including her 1960 poem “The Hanging Man,” so perhaps it makes sense.

Here’s what Plath wrote about the deck in a letter to her mother, Aurelia, the day after receiving the gift in the fall of 1956:

We celebrated my birthday yesterday: [Ted] gave me a lovely Tarot pack of cards and a dear rhyme with it, so after the obligations of this term are over your daughter shall start her way on the road to becoming a seeress & will also learn how to do horoscopes, a very difficult art which means reviving my elementary math.