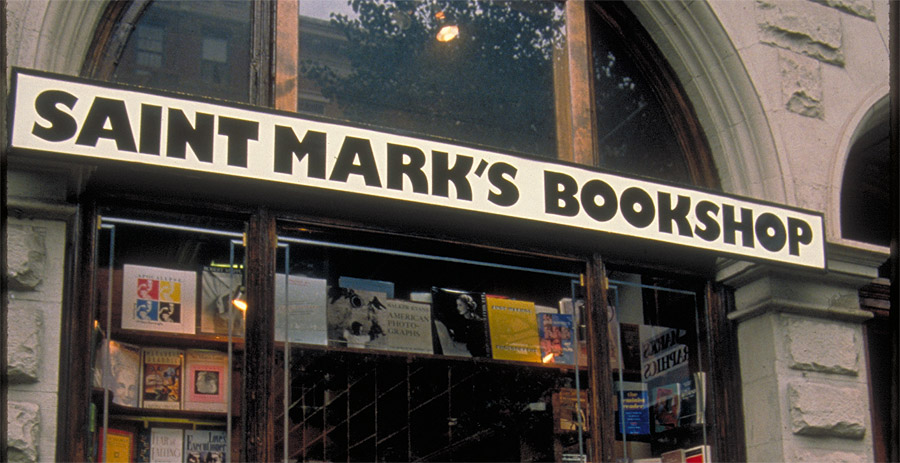 An Ode to the Late St. Mark's Bookshop and its A-List Roster of Regulars

It’s heartbreaking that St. Mark’s Bookshop has closed its doors. Bob Contant, Terry McCoy, and their co-founders created a bookstore that both showcased and helped foster the creative output and artistic tastes of a neighborhood that happened to be one of the most influential and iconic artists’ enclaves in the world: the East Village, aka Downtown New York. As a young writer, it was a privilege to work there and watch the parade go by, to get a working education in avant garde art, literature, reading habits, and the people who were art-famous or trying to get there. This essay is excerpted from Bagging the Beats at Midnight, a memoir-in-progress of St. Mark’s Bookshop.

“Bjork was just upstairs.” Krista sounded tired as she breezed through the basement door, reporting the latest celebrity customer.

“Nuh-uh! Those fuckers!” I was stuck in the basement receiving a large shipment from Ingram, unpacking stacks of new paperbacks and backlist fiction, counting and checking off titles, price-gunning books that lacked a bar code, boxing the books back up to be carried to the first floor for shelving.

Pissed, I ran over to Patrick’s phone and dialed the back desk extension. Leave it to the music-heads—Kevin, Jared, and Abby—to be too-cool-for-school to mention fucking Bjork. “You GU-UYS! Why didn’t you TELL me BJORK was in the store?!” I yelled through the speakerphone intercom. At the word “Bjork,” Kevin grabbed the phone and said through gritted teeth, “She’s still here.”

“Oh good!” I took a box of books with me when I went upstairs and glanced around the store, cheerful in my anonymous working-clerk identity as Bjork browsed magazines near Kevin, Abby, and Jared, who wereat the info desk all looking into their shoes—unless glaring in my direction.

Of course, the back desk crew was simply correct—I had violated the rules. St. Mark’s was a place where downtown artists were regulars and bigger celebrities were frequent, while customers and clerks alike were to be utterly blasé about fame. Diva Diamanda Galas would come by to browse the new photography books and discuss opera and psychiatry with Edward, the elegant daytime register clerk. Richard Hell hung out with Diana as she priced and unbundled piles of magazines. When she wasn’t talking to Mr. Hell, Diana was on her way to lunch with Robert Frank’s wife June Leaf, laughing at Maurizio Cattelan’s jokes, or conferring with Seth Tobocman about the next issue of the radical comics anthology, World War Three. Arthur Nersesian dropped by almost daily to discuss five minutes of anything with any clerk who was at any counter. Susan Sontag was often caught browsing overstock behind the counter, and many a clerk embarrassed herself by not recognizing her before shooing her back onto the floor. The clerk in question was later punished by a well-directed tap of the credit card by the imperious Ms. Sontag. Jim Jarmusch cruised the fiction and film sections and John Waters dropped by when he wasn’t filming in Baltimore. Chloë Sevigny, Harmony Korine, and A.R.E. Weapons band members regularly clogged up the back aisle reading fashion and lifestyle mags. I learned to recognize Karen Finley by the leopard print thong sticking out of leather pants.

Once I picked up the phone and a woman who sounded exactly like Dr. Ruth said, “Thees ees Dr. Ruth. Do you haff ________? Gut. I’ll be there een 15 meenutes.” She was promptly chauffeured downtown from the Upper East Side to retrieve the book. Robin Williams came in one slow summer morning and bought Uncle Tungsten by Oliver Sacks when it was still in hardback. He wore wraparound reflective silver shades but his identity was unmistakable. He smiled at me as I rang him up, knowing I knew who he was, but no words passed between us. At the height of X Files mania, I spotted Gillian Anderson standing stock-still near the front-wall poetry titles one crowded Friday night, looking exactly like an unhappy mannequin of herself. She was much smaller than her screen-presence suggested, and (like Whoopi Goldberg) looked far too much like her for it to be her.

John Waite came to my register another busy weekend night. I was following the rules and keeping calm while I rang him up, even though the 13-year-old in me was jumping up and down, “It’s John Waite! It’s John Waite!” But my cool wasn’t enough for this rock star who’d last had a big hit in 1984. He’d paid with a credit card, but when he got no reaction from me, he repeated his transaction, grabbing one of the impulse books (maybe The Melancholy Death of Oyster Boy or 101 Unuseless Japanese Inventions) in front of the register and letting me see his credit card again. My heart broke a little as I recalled how huge “I Ain’t Missing You” had been in my eighth-grade psyche. Meanwhile, when the poet Nuala NiDhomnaill (who writes only in Gaelic) was at my register, I gushed all over her: “I love your poetry!” She was shocked I had heard of her, and she never even knew that I’d read everything in translation I could find, and attempted to follow some of her Irish.

David Blaine came in one weekday evening, trying to impress his tight-skirt date with how many books he could carry stacked in his arms at once. Poet Suheir Hammad stopped by for tête-a-têtes with Jared near the Lit Journals shelf, while Dennis was once cock-blocked by Lenny Kravitz in the Science section. Junot Diaz used to breeze through often, in the days when his book of acclaimed short stories, Drown, was the only thing of his on the shelf. Carl Andre was a regular, and he always dressed and looked like he was Amish—stocky German frame, that jaw-tracing beard, a straw hat, denim overalls, and tan workboots. There was another fellow who looked almost exactly like him, with the same outfit, and for all I know, he was Amish. I always felt terribly strange seeing Andre. He was a painter who’d been married to the amazing feminist artist Ana Mendieta—there were chilling photos of her “siluetas” in one of our Art Crit books. In a heated argument, he had supposedly pushed her to her death out the window of their 5th floor apartment. The official reports couldn’t find enough evidence to say it wasn’t a suicide or an accident, but everyone close to them thought differently. According to Arthur Nersesian in his novel Chinese Takeout, the trial had been the O.J. Simpson drama of the ’80s New York art world. What I remembered was the protest in SoHo that took place soon after I arrived in Manhattan in the early ’90s. Andre had a show up at the new downtown Guggenheim, and the Women’s Action Coalition organized a large rally outside during the opening. Their signs read, “Carl Andre is at the Guggenheim. ¿Donde Está Ana Mendieta?” I was fresh off an undergraduate education in art, women’s studies, and feminist film theory—news photos of the protest left an impression on me, to say the least.

There were times when we consciously broke the code of cool. Jacques Derrida bought a copy of Derrida for Beginners when Dan was at the register; Dan teased him with, “Still trying to understand yourself, eh?” (I saw only Derrida’s back as he walked away up Third Avenue). Avital Ronell came to the information desk to mention that her students were going to come in looking for The Telephone Book, but we had only one copy on the shelf in the popular Cult Crit section. I recognized her and knew also that the title was hers; when I called down to Terry on the phone I said something uncharacteristically deferent like, “We’re running low on an important philosophy title. Can I assure this professor that we’ll restock it by the time her students come looking for it?” (Ronell gave me a blushing nod.) Terry must have thought that I’d been abducted by aliens and replaced by a British career-clerk, but every once in a while that kind of behavior felt terribly gratifying. (Another time a customer asked me to erase the penciled-in price on a book before wrapping it as a gift. To begin with, I found a pencil with an eraser, and erased the dirt from the rubber on a blank sheet of scrap paper before letting it touch the book’s end papers—as I had learned while working the paper floor at Pearl Paint. “Ah, a real professional,” the customer said, in full appreciation of the gesture’s meaning. I was surprised by the pride I felt in this.)

Our boss Bob, a longtime New Yorker, was the most jaded of us all when it came to famous customers—though even he had a few exceptions. The first time Tuli Kupferberg came into the store, I almost mistook him for a small homeless man dressed all in purple because at least two of those things were true. But from the basement Bob got wind of his entrance, and the next thing I Bob he was standing with him in the Mystery section, his face aglow like a child’s. Nobody ever topped that reaction, but when the author of Fight Club came to sign his new book, Choke, all I heard for the rest of the day was Patrick chuckling at Bob’s delight. “‘Chuck Palahniuk was such a sweetheart!’”

Like many others, I spent months and possibly even years waiting on Gary Indiana before I learned that he was a prolific author and not merely another flamboyant, well-read regular. Gary tended to start every conversation in media res. He would come into the store waxing eloquent about his “sexual loneliness,” laughing about what Jayne County said at the art opening last night, using midlist fiction authors as punchlines, lamenting that there were no more drag queens like Jackie Curtis, or complaining that if Schwarzenegger won the election tonight, he had to write his bio for Verso in the next few months. Once the story was that his recent ex had just sold all his books to the Strand, and even though his name was written in the books, Fred Bass refused to give them back. He got kicked out permanently from Kim’s (the great video store around the corner), so he started coming to me when I was at work and asking me to go rent a video for him. Like a junkie for film. When the whole North East lost power and we learned about the grid system, he raved, “See? Hegel was right!” Sometime later, he came in with a twisted New York license plate, a vanity plate that said “HABERMAS.” He said, “When I saw this, I just had to have it.” He’d ripped it off the car with his bare hands. Later he made photo stickers out of it and passed them out to everyone he saw.

Karen Lillis is the author of four books of fiction, including the novellas Watch the Doors as They Close (Spuyten Duyvil, 2012) and The Second Elizabeth (Six Gallery Press, 2009). Her writing has appeared in The Austin Chronicle, Composite Arts Magazine, Evergreen Review, Everyday Genius, Cashiers du Cinemart, Free State Review, Guide to Kulchur Quarterly, LA Cultural Weekly, and TRIP CITY, among others. She is the recipient of a 2014 Acker Award for Avant Garde Excellence in Fiction. 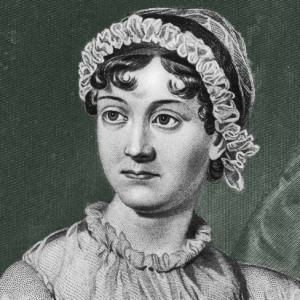 The beautifull Cassandra a novel in twelve Chapters dedicated by permission to Miss Austen. Dedication. Madam You...
© LitHub
Back to top