Stay Home, They Told Us… Diary of an Italian Editor

Sara Reggiani on Life in Quarantine

“Stay home, if you can,” they told us in the beginning. And I could. I run a small publishing house from my home and at home is where I have always spent the majority of my time. I was not afraid. I can do it, I told myself. This changes nothing. Then the advice became an order. “Stay home!” they told us. And everything changed.

We live as if a predator roams outside. And no one knows when it will tire of the hunt and move on. Usually crowded with tourists from all over the world, the streets of our beloved Florence are now totally empty. Pigeons and doves and carrion crows, taken aback from the sudden quiet, look at each other in disbelief. Spring is coming but we know we won’t be able to enjoy it. Things we used to take for granted, like taking a walk in the park or paying a visit to a friend, have become a luxury that we cannot afford. This used to be a time when gatherings were welcome; now we are asked to stay away from each other, to be wary of anyone who comes too close. When this will be over, how long will it take before we feel safe again to greet each other with a kiss on the cheek? And where will all the homeless people go while we are busy complaining of getting bored at home?

At least we have refuge, even if it is starting to feel tighter and tighter, I tell myself as I ration food for the week: the less time we spend in crowded areas like supermarkets the better, and in any case only one family member is allowed out at a time to go food shopping and must carry a document with them stating the reason for which they have left home—if the statement turns out to be false, charges are filed.

It’s not a war we’re living through, we have everything we need: food and distractions, books, music and technology to communicate with the rest of the world. But for the past few days I have woken with a drone in my ears. I get up, drink coffee, sit at the computer, talk and downplay things with my husband, make lunch, work some more, make dinner and the drone is always there, a thin veil that separates me from what little I can still see and touch. I am a robot, performing the actions for which I was programmed. My mind attempts to establish contact with a new, static body—for now we are permitted to go out for a walk, but alone and never far from home—a body that does not do the things it once did. It’s the isolation, I tell myself. The uncertainty of tomorrow. The lack of oxygen.

This sacrifice is necessary and will even lead to good on many levels if only, when it is all over, we don’t forget we are fundamentally vulnerable and that our actions have consequences.

The truth is that in this funereal silence—the sounds of the city have vanished, only the bells of Santa Croce articulate my days—we now feel the full weight of our thoughts. And behind mine is a voice that says, I had no choice, I had to stop you. This will pass, but don’t forget. This is why I do not die of fear—of the illness, of the economic crisis, of the loss of points of reference. Because I know that voice is right, that this sacrifice is necessary and will even lead to good on many levels if only, when it is all over, we don’t forget we are fundamentally vulnerable and that our actions have consequences.

Perhaps I talk like this because I am lucky: first off I have a home where all day, I sit at my desk, I pore over and translate stories to be published. This is my job. Stories. The virus has already infected the way I read them and has told me which to publish in the coming year, when my readers will need to recover from this trauma and look forward. It’s not the end of the world, I tell myself as I fold the clean linen with unusual care and attention. Because this is another unforeseen consequence: every act, even the most insignificant, has taken on new weight, every caress I give to the cat I also give to myself, every “goodnight” is pronounced with the sincere hope that the night doesn’t bring nightmares worse than the one we are already living.

Some times, at dawn, my eyes still shut, body relaxed and mind already tired, I think this new slowness the virus is teaching us is nice, that this lesson in patience is healthy. That what was wrong was the frenetic energy of before, which never let us enjoy anything, which took our breath away, energy that has now been poured into social media, morphing into the urge to tell, to warn, to show solidarity. We wrap ourselves up in one another. We make noise to stop this silence becoming a mirror. If the virus wanted us alone, there is a reason. Why not try and embrace it, the silence, to finally reflect on how our lifestyle should be changed?

It’s not the end of the world, I tell myself as I fold the clean linen with unusual care and attention.

Stay home, read a book! yells everyone, but how am I to know which book I need amidst this din of suggestions that often seem like just another attempt to impose ones own identity and tastes onto someone else? Perhaps this time books are insufficient, and I say this in amazement, considering the work I do. It is not easy to concentrate on reading while the world around you trembles. Maybe once we have grown fully accustomed to the change we will rediscover the necessary calm, but it is still early, and music is what is needed now, to soothe the nerves.

Egotism still abounds, but even here the virus has a lesson to teach us. Anyone who leaves home without a valid reason now risks killing his or her neighbor with a mere cough. Some are afraid, have come to their senses—or simply fear punishment will arrive from on high. Others are unmoved, but man is man, and this is a whole other story.

It has been months since I have seen my parents—they still live in the city where I grew up, Pesaro, Marche, one of the regions with the highest number of infections—but we have never spoken as many times a day as we do now. They are 70 years old and never imagined they would experience something like this. “I’m not afraid,” my mother told me last night, “I feel like a silent bee, but I’m not afraid.” A silent bee. So that’s the drone I have in my head, I thought. It is the old me struggling, unable to come to terms with having to be still. But what if I were to try?

Sara Reggiani is co-publisher of Edizioni Black Coffee, and has translated numerous books from English into Italian. 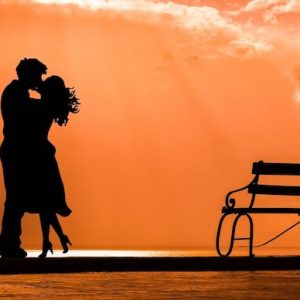 In the 1980s, feminist academics (including myself) became intrigued by romance reading, partly because—paradoxically—the...
© LitHub
Back to top