“These fragments I have shored against my ruins”
–T.S. Eliot, The Wasteland

On the six-month anniversary of July 21, 2019, in which over 100 men garbed in white entered the Yuen Long railway station in Hong Kong and beat commuting passengers with metal rods and wooden clubs, I spent the day attempting to write fiction and failing. Instead, I read Stéphane Mallarmé’s A Tomb for Anatole.

I read Mallarmé while trying to process the trauma of panic-blurred footage of a pregnant woman being chased down and attacked. Of corroborating reports on citizens desperately trying in vain to connect to emergency hotlines. And the disturbing news of police arriving, immediately retreating and then returning only after the thugs—some later identified as members of local triad gangs—dispersed from the station, leaving in their wake over 40 injured passengers, some bleeding and down on the ground.

A clash in public opinion around this event, like so many others, has since divided the city. Protestors suspected collusion, while those in support of the police applauded their efforts to track down some of the perpetrators. Then there were the few who darkly claimed that this was payback for weeks of disruptive protests.

A Tomb for Anatole was published in 1961, 63 years after Mallarmé’s death. It comprises 202 texts of an unfinished epic poem written after the loss of his eight-year-old son, and is largely identified as an elegy on grief, encapsulating the impossibility of coherence in its fragmented shape.

In Hong Kong, writing is at risk of obliteration.

In her essay “Fragmentary or Unfinished,” Lydia Davis describes the inarticulateness of these forms of writings as being “the most credible expression of grief.” On days this past year when the chaos and loss is too much and my words stall on the page, I seek fragmented writing. After the death of 22-year-old student Chow Tsz-lok, who was suspected to be fleeing from authorities when he plummeted off a rooftop, I turn to Joan Didion and her compulsive reordering of events in The Year of Magical Thinking; in between carousels of rubber bullets and teargas and blood, I immerse myself in George Saunders’ Lincoln in the Bardo and his cavalry of haunted djinn; and after watching footage of prostrate bodies on the streets of Wuhan, presumably victims of coronavirus, I read Weather by Jenny Offill, drawn to her delivery of global impending doom. “In the silences, the grief is alive,” Davis says of the pauses, the lapses between fragments. So, in those white spaces, I grieve.

And all the while, my words come out in fits and starts, as fragments: discontinuous, incomplete, rootless.

It has been over a year since the extradition bill was announced in Hong Kong; nine months since the first anti-extradition bill mass protest in June; and roughly a month since the city entered a state of semi-quarantine after the outbreak of COVID-19. Last April, I resigned from my full-time job with the intent to commit myself to fiction. Since then, I have struggled not just with writer’s block or revision strategies but the more psychological task of how to write in and after such events, when there is so clearly a demarcation, a pre-fragmentation—a before.

It appears others are experiencing a similar loss of past self and the emerging of a new one. Students and activists are increasingly turning to poetry, and sometimes, fiction, in Cantonese and English. Out of a desire to resist forgetting, writers grasp a specific active moment and record it, no matter how painful or unfinished, no matter how fleeting. These fragments bring us closer to the emotion of ongoing reality.

I like the intimate diary-like vignettes of observers such as independent curator and arts writer Yang Yeung, who wrote on Facebook after returning from the Human Rights Day march on December 8: “I was one of the many forming the coil around the bus-stop. We were focusing a little more on the anterior of our bodies, with anticipation, than on other things. It was not too long a wait: the buses came like water, so we could leave like water.” I also empathize with Tammy Ho Lai Ming—co-founder of literary magazine Cha: An Asian Literary Journal, president of PEN Hong Kong—who updates her social media regularly with irate, sobering or humorous notes attached to protest or virus imagery, dreams, and prose-poems written in the immediacy of a moment. (Some have since been published in Asian American Writers’ Workshop’s The Margins, among other journals.) Seeing and checking back on fragmented posts written by peers and friends are reminders to pause, to connect the exterior to the interior, to humanize the movement with individual perspectives.

“Any complete picture is an illusion. A picture that seems less complete may seem less of an illusion, therefore paradoxically more realistic.”

Then there are the quickly-produced lo-fi protest zines, little booklets or folded broadsheets that range from journal-like documentation of milestone days to calls-to-action intended for distribution at a rally. Within this genre is a small selection that tackles experimental writing, such as the speculative Salty Wet, an epistolary zine of fragmented thoughts, tweets, conversations and quotes around the future of Hong Kong. Or Liana Fu’s 出入口 Passages, which unpacks diasporic relationships to Hong Kong via discontinuous imagery and text, such as the insertion of a square bracket, which references the Chinese character for “mouth” or “opening”: “ I keep getting stuck on hating [  ] for wanting to [  ] so much so I feel like I have something worthy to say. I hate feeling [  ] about all of what I’m feeling now.”

The briefer the text, the more present the grief. Stephen Lam’s We Did Not See, We Did Not Forget is a sheet of circular photographs of coffee filters—redolent of X-ray scans of the body—on the backside of which he printed poetry. “We did not see everything / We did not see what you see / We did not see the students / We did not see you,” the isolated lines read. In between, in the white spaces, an unseen trauma rumbles awake.

How can we understand and see Hong Kong from afar? The Bauhinia Project, initiated by an anonymous Hong Kong poet in Berkeley, solicits and gathers poetry and words from Cantonese-speaking protestors, translating these texts and sharing them across California through small events and artworks. “From the teargassed street / Into the restaurant / He asked if I wanted to eat something / I had no money left” one reads. Another describes the fears of a 28-year-old queer woman, afraid that if new laws are enacted she will be separated from her lover; in another, a young man recalls when his mother takes his place in an altercation with riot police, asking him to go home and rest. These morsels of interior voices, rejecting chronological order or totality, hold up a true mirror of a broken Hong Kong from 6,900 miles away.

The immediacy and experimental nature of the fragment resists totalitarianism—of form, content, and other centralized powers. Fragments can travel easily across land and water. They can be shared in an instant, requiring very little context; their very existence already implies an imagined or projected whole.

We must find connectivity within ourselves and one another in those white spaces of grief.

As Maurice Blanchot says: “The severed finger refers back to the hand, just as the first atom prefigures and contains in itself the universe.”

In Hong Kong, writing is at risk of obliteration. There is evidence of erasure all over the city. Where there was once clearly defined protest graffiti—some calligraphic, poetic or incendiary—there are now only colorless bleached spots, smears that resemble abstract shui mo paintings, layers of white paint. Despite long-held stringent laws on graffiti, it is difficult to not see this as a metaphor for the lost word. That is why what is being written now is vital. Like a glimmering vug in a large, stiff face of unyielding rock, these fragments persevere, pushing their way into the light.

There is a geodata website in which you can quickly see new confirmed coronavirus cases in Hong Kong. Zoom in on the dots—pulsing white with a red halo—and a comprehensive report reveals the exact locale and last-seen date of the infected person. These days, I compulsively draw up the page, checking again and again to see if there are any new updates. There is a quietness to day-to-day activity. Although most people are back to work, there are many working from home still Unbound from the classroom, children zoom around on bikes in the cloak of night, and in almost every residential block, there are clusters of people in self-quarantine, ordering cans of non-perishable foods online.

As crippling as the current epidemic has been for economic and political progression in Hong Kong, it has allowed for more white space in the city. In this silence, I have been writing again. I joined an online writing class about fragments led by Alexandra Chang and have sketched a faint outline of my collection of short, fragmented stories. With these acts, I have arrived at the conclusion that it is no longer authentic to seek internal closure or wholeness in writing about or from Hong Kong. As Davis stated, “any complete picture is an illusion. A picture that seems less complete may seem less of an illusion, therefore paradoxically more realistic.”

I have recently been thinking of this Hon Lai Chu essay, published after the 2014 Umbrella Movement. In it, she goes to the edge of the water the night the police force cleared protest sites in Mongkok, with the thought in her mind that “to see the sea should be the most basic right for people living on an island, and yet, for even this much one must make a stand.” She argues that only those who fight for human rights might begin to form a complete world, for themselves and others.

But the reality is that there is so much fragmentation to begin with, and we must find connectivity within ourselves and one another in those white spaces of grief. “The world has always been broken,” she writes, “and it is exactly because the world is broken that this city is not just my city, nor yours, but is everybody’s image mirrored on the shards.” From these shards, we may try to form multiple images—however partial, however ephemeral—of our home.

Ysabelle Cheung is a writer and editor based in Hong Kong. She holds a BA in English literature and creative writing from the University of East Anglia and was the managing editor of ArtAsiaPacific from 2016 to 2019. Her criticism has appeared in Artforum, ArtReview, Hyperallergic and the Los Angeles Review of Books; her fiction in Catapult and the anthologies Hong Kong Noir and the Queen of Statue Square. 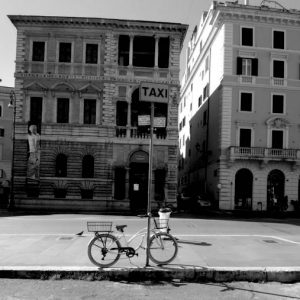 Stay Home, They Told Us... Diary of an Italian Editor “Stay home, if you can,” they told us in the beginning. And I could. I run a small publishing house from my home and at home...
© LitHub
Back to top