“People like us… we don’t get a choice.”
–Amazing Spider-Man Annual #35

Spider-Man was the perfect superhero for the child of immigrants from London in the 1990s. He understood shame and guilt like I did.

Peter Parker’s dual identity—one moment the science nerd, the other as friendly neighborhood Spider-Man—spoke to me. I empathized with the way he code-switched between shyness in one life, and cockiness in the other. He wore different masks and spoke in different languages, a duality synonymous with that of the child of immigrants. Often, while trying to do good, he was caught in lies. He led a secret life. He was unpopular at school. He could have been me.

I kept my head down at school and studied hard, trying my best not to fail at the subjects my father longed for me to succeed in—science, math, while easing my way to As in English and creative writing. I spoke in codes—at my predominantly white school, I stuck with the nerds as it was the best place to hide; at home, I spoke Gujarati; with friends, I spoke like a fan of gangster rap.

With great power comes responsibility, Uncle Ben told Peter, before dying tragically. It became a mantra—for Spider-Man and for me.

I felt the responsibility of my parents’ migration. Mum and dad came here to have a family and ensure that that family get a good education and become successful. Dad spent the 1970s buying into the conservative myth that if you work hard, you’ll be rewarded for your labor. He wasn’t so naïve that he assumed it was a level playing field—instead, he knew, as all immigrants knew, that you have to work twice as hard to have half the opportunities.

“Fate gave me some terrific super-powers, and I realize now that it’s my duty to use them… without doubt… without hesitation!!”
–The Amazing Spider-Man #18

It’s a strange time, your first one in a comic shop. You don’t understand the code, feel inferior for not knowing exactly what you’re looking for, and take up space in front of shelves long-term fans feel entitled to. The first Spider-Man comic I picked up had the Green Goblin lobbing pumpkin bombs at Spidey. My best friend Junaid was obsessed with Superman. My loyalty was yet to be bought.

It was 1990 and we were at Calamity Comics, in North West London. Soon, I learned the code. Through the episodic adventures of Spider-Man, I felt a part of something.

“All these years—I’ve done my best to make up for that! I’ve worn this suit—gone out there and put my life on the line again and again! But no matter how hard I try people die!”
–Amazing Spider-Man: Soul of the Hunter vol. 1

My parents weren’t wealthy and the worst thing I could do, in their eyes, was waste money. Comics were a waste of money: specifically, a fiver a week on several issues that took fifteen minutes to read, and then five minutes to re-read a day later. I binged through issues. My eyes danced across each panel.

The idea of putting on a suit and being a better version of yourself appealed to me. For Superman, putting on the suit entailed being himself (Clark Kent being the everyday mask he wore); for Spider-Man, putting on the suit meant being everything Peter Parker couldn’t be. I found comfort in that. In life I was Peter Parker—reading comics I was Spider-Man. I dreamed of the confidence with which Spider-Man dispensed of Dr. Octopus or the Green Goblin; the cockiness with which he deployed his web-shooters; the wisecracks he flung at villains with abandon.

“I’m glad you remembered the hyphen,” he told Electro. “Most people leave it out.”

“Too bad you couldn’t get a new hairstyle,” he told Doc Ock.

“You always have an answer for everything,” Richard Milestone once told me.

I lived in fear of being beaten up. Not because there was any real threat of someone knocking me out, but because I was a teenager and I wore my outsider status like a brick wall I was always on the verge of getting shoved against. Comics allowed me stillness, escapism, a world where quiet nerds like me could make a difference.

The more comics I read, the more I became obsessed with being a writer. I didn’t care what: short stories, the great American novel, film scripts, arcs for comics, raps. I wasn’t fussy.

My first, terrible attempts at writing were synopses for Spider-Man arcs that were yet to be written. Thankfully, such juvenilia no longer exists, because when I moved out of home with my girlfriend at 22, I decided I could no longer have ties to such childishness. I threw it all away. I think back to what those issues taught me about storytelling, how they gave me the tools to pace, to ensure that dialogue is punchy, exciting, realistic and not overwritten.

The biggest thing comics taught me about writing was that bad writing involved characters explaining the plot to each other. Good writing showed you the plot. Writing those synopses, in a brown exercise book, I honed these skills.

I wrote Peter Parker into my school. I made his antagonists my own. I made Mary-Jane a girl he got the train with. I resituated his battles with Sandman and the Vulture in North West London. Peter Parker became a cypher for me. Spider-Man became the best possible version of myself.

Being a writer was the furthest thing from what my dad wanted me to be. He was desperate for me to take over the family business and expand it. Our small family business, importing gift-wrapping paper from abroad and selling it to high street retailers, was a homespun affair. In tandem with my homework, my mother and I would sit in front of the television, watching sitcoms like The Fresh Prince of Bel-Air while folding reams of gift-wrapping paper to the correct size for the correct retailer. Start at the bottom and you will then understand every level of the business for when you take it over, my dad thought. He probably also liked my sister and I for the cheap labor. He sat on the other side of the room, listening to ABBA records, a whisky in hand, thinking, strategizing. We watched television with subtitles on.

Most Sundays, I went with him to the warehouse to pack orders. While they took breaks, I was expected to do my homework, time I saw as an opportunity to find comfortable boxes to slouch on, and read comics. They were my dirty secret.

Our lives were about saving money. Mum bought most things in bulk, because cooking for our family, my dad’s brother’s family and my grandparents—all of whom were working on the family business—was cheaper than shopping meal to meal. I made money to buy Spidey comics by buying up cheap Batman and Superman comics I could sell on to rich kids at my school who lived in the suburbs and wouldn’t go to the comic shop.

I wrote in secret. I read in secret. When I was caught, I lied: “I borrowed this comic from Junaid. This rap song, with the swear words still in? Taped off the radio. These notebooks of writing? They’re for English class. That film script that has my name on the cover? Junaid wrote it. I just helped.”

I felt shame that my heart was not in the family business.

Flicking through the racks in Calamity Comics one Saturday, I came across parts one and two of a four-part arc called Kraven’s Last Hunt. In it, Kraven the Hunter hunts down Spider-Man, defeats him, and appears to shoot him dead. Kraven then buries him, and, donning a copy of Spider-Man’s costume, seeks to prove himself superior at his adversary’s former activities. By becoming Spider-Man, he becomes his best attempt at his public perception of who Spider-Man is. But he misses a crucial component—Peter Parker. He has no idea who he is. He has no knowledge of his rage, his caring for others, his compassion, his humanity. These are the key ingredients for Spider-Man. The person behind the mask. I didn’t understand that at the time. That much as I hid, people could still see me.

Years later, my mum was in hospital, diagnosed with lung cancer. About a fortnight before she died, I came to visit her and dad and to give her a finished copy of my first novel. She held it in her hands and looked at me

“I always knew you’d do it,” she said. Dad nodded.

In that moment, I felt like my parents were finally looking at the teenager behind the mask, the boy driven by guilt and shame but also responsibility. I felt like they were really seeing me.

Nikesh Shukla is the author of Coconut Unlimited, editor of the essay collection The Good Immigrant, and, with Kieran Yates, a non-fiction essay about the 2011 riots called Generation Vexed: What the Riots Don't Tell Us About Our Nation's Youth. He hosts The Subaltern podcast, about writing. 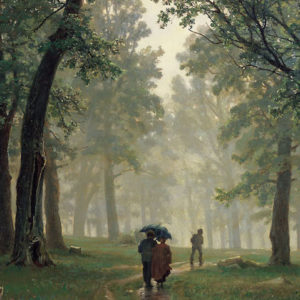 In the fall of 1860, trees were at the center of Thoreau’s life. His long interest in how they live, grow, and propagate...
© LitHub
Back to top