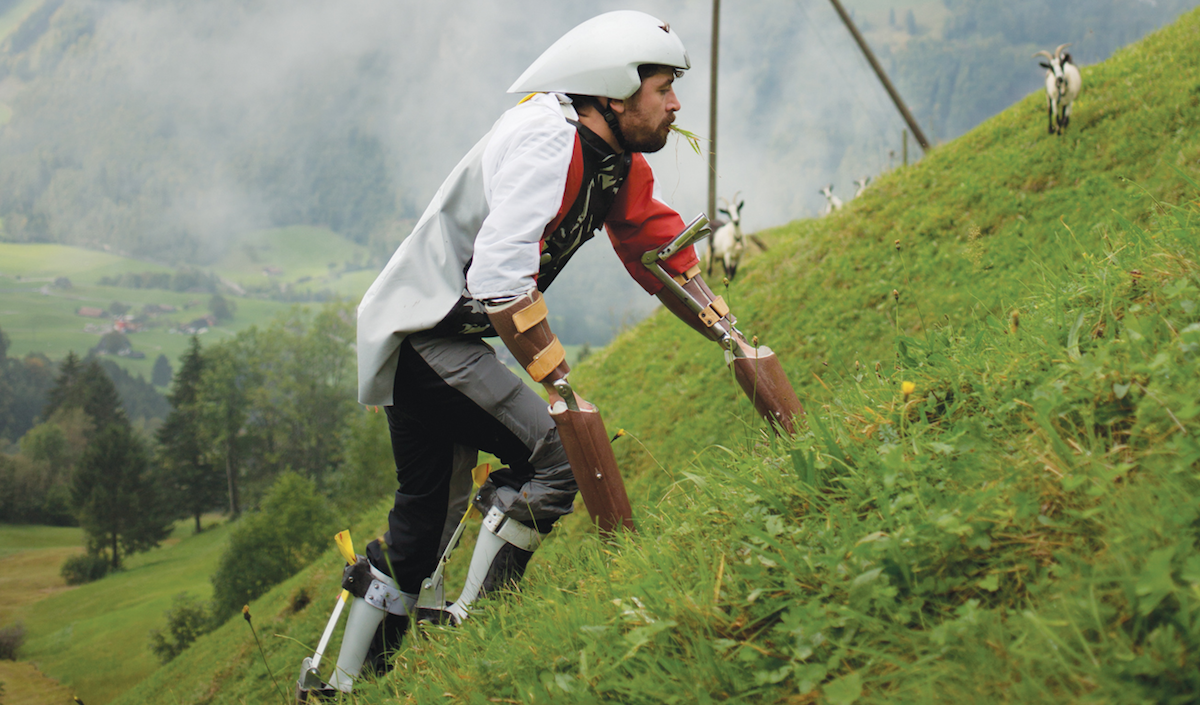 GoatMan, the new book from designer Thomas Thwaites about his attempts at becoming one of the herd, answers all of the questions about human-goat transmogrification that you never thought to ask (or thought at all).

“He who makes a beast of himself gets rid of the pain of being a man.”
–Samuel Johnson

Although the quote above is perhaps best known as the epigraph to Hunter S. Thompson’s novel Fear and Loathing in Las Vegas, it would make for an equally fitting introduction to GoatMan, a new nonfiction book from English designer Thomas Thwaites, out now from Princeton Architectural Press. Whereas Thompson sought to escape the realities of being a political animal in 1970s America through drugs, alcohol and violence, Thwaites takes a much more literal approach. He attempts to ease his modern malaise by, at first, envying his nieces’ dog’s peace of mind, then submitting a grant proposal to the research charity the Wellcome Trust detailing his plans to “become” an elephant, before finally realizing his true, goat-filled destiny after speaking with a Danish shaman.

What follows are 200 pages, replete with photographs and illustrations, of Thwaites’ journey into the mind, body and soul of a goat. He speaks with animal behavior experts to understand how goats think, collaborates with veterinarians and prosthetists to design a goat-like exoskeleton, and studies shamanism to learn how human beings have historically tried to become animals. The final test of his success is joining a herd to cross the Alps, relying solely on his prosthetic goat limbs, a pressure cooker to help him eat grass and a raincoat provided at last minute by his mother. Things admittedly do not go according to plan, but the ride is hilarious and often times legitimately revelatory regarding our relationship with animals as well as ourselves.

I recently spoke with Thwaites about the extent of his transformation, the lessons he gleaned from it and the difficulties of writing a book while trying to be a goat. (Note: The discussion has been edited for clarity.)

Arvind Dilawar: At any point during your transformation from human to goat, did you feel yourself more the latter rather than the former? Did it ever become even slightly more difficult to relate to human problems or just speak with people?

Thomas Thwaites: I suppose my goal was to forget myself—that kind of forgetting that happens when you’re walking a familiar route, say, and suddenly you’re nearly home, and you can’t even remember what you were thinking about for the last 20 minutes. I think it’s similar to a state of mediation. Now whether I achieved this in the field, surrounded by 50 goats, eating grass myself, while on four legs, well, perhaps momentarily. The trouble is I suppose that it was so novel for me. Maybe it was a kind of an innately self-defeating thing to do! And then there was the physical discomfort. My waterproof suit made of some advanced technical fabrics turned out to be not so waterproof, and so when the sun started going down I would start to get cold and start shivering, and hunger and my human worries and concerns came flooding back. So momentarily yes, but ultimately there’s no escape! Being eye to eye, nose to nose, and hoof to hoof with the other goats certainly heightened my affinity for them though. My plan is to go back. I’ve had lots of (well, three) emails from different goat herders, who’ve seen the project blogged and offered me the chance to join their herd. Now that the “project” bit of it is out the way (and the book!) and I don’t have to worry about that anymore, I can go back just for myself and I think I’ll get closer. It’ll be less novel for a start, and I learned a lot the first time, so I’ve already re-made an improved set of back-leg prosthetics. So I guess it’s an ongoing project for me. One day I’ll get there!

AD: What will you do differently the next time around?

TT: Now that the project is all done, I can go back and hopefully it’ll be easier to forget myself, which was the goal the first time, but then there’s my friend there taking photos, which is a bit of distraction. And also, I learnt a lot about my prosthetics during that first major field test. I’ve changed the back-leg prosthetics so that they now support my legs from the front, which allows me to relax into a better goat posture. (Note: When using fiberglass bandages to make casts of one’s legs, ideally only do one at a time and make sure you’ve got a power saw handy so you can cut yourself out of them.) There’s also things I didn’t manage to finish in time for the experiment—growing my hair long then using resin to stick it together into horns, for example.

AD: You seem relieved that the book documenting your adventure is complete. Did you always plan to write a book about the experiment? Did that sabotage your ultimate goal by forcing you to think like a writer when you really wanted to be thinking like a goat?

TT: I am relieved the book is finished. I’m not a very quick writer, so it was a bit of a slog getting everything down on paper, but then plenty of authors would say that! And the project wasn’t necessarily going to become a book. I’m a “designer” (speculative) as well, so my projects are also for exhibition. The second prototype goat legs are touring Australia in an exhibition called “New Alchemists,” and the third prototype legs are in an exhibition in Rotterdam called “The Life Fair.” So I wasn’t thinking so much like a writer when I was trying to be a goat, but you’re right in that I do feel I need to go back and do it again, now that the project is done and the Wellcome Trust, who funded the project, have their deliverables and stuff. It’s the same difficulty with all these kind of experiments: how to not let the practicalities of potentially relating them unduly influence the experiment!

AD: What were the literary influences behind GoatMan? Henry David Thoreau’s Walden immediately came to my mind.

TT: A link between Walden and my goat experiment was made at a symposium I was speaking at too, but the thing is, I’ve not actually read Walden. It’s now very much on my list though. And, to again mention my work in the same sentence as some of the greats, I would say Kafka’s The Metamorphosis probably fed into my project to become a goat. I mean, we’re talking about the problems of being a human I suppose.

AD: The Wellcome Trust funded your transformation from man to goat. What was their ultimate response to your project?

TT: Ha! Well, I think one of their goals in funding projects like this is to somehow encourage a scientific outlook in society. I guess one of my goals—well, when writing the book after the project anyway—was a sort of reconciling of this ancient human spiritual desire to take on the characteristics of other animals, with present-day science and technology. I mean, science, when applied, is kind of about the pursuit of humanity’s dreams, right? So I think our goals align. The project in the UK has had a fair amount of press in the tabloids and so on, which is good in one way, but then I worry if anyone will get past the “crazy guy tries to become a goat” thing to the deeper research behind it.

AD: What do you want readers to take away from GoatMan?

TT: I’m totally fine if some people just hear a bit about the project and it brings them some amusement or happiness at the absurdity of it. There’s plenty of problems in the world caused by people taking themselves and their beliefs far too seriously. And I guess that relates to the deeper meaning of it: It’s an exploration of different ways of seeing the world, both human and non-human, but also within different human tribes. It’s nice to have a conversations with a shaman, an ethologist, an anatomist, a prosthetics clinician, a neuroscientist and a goat herder all in the same book. All have very different ideas of “nature.” [GoatMan is] a personal attempt for me to get outside of my own worries and perspective on the world, and also to survey these other perspectives.

AD: Did you experience any short-term or long-term benefits from your experiment?

TT: I did get a new perspective on the world. Being on four legs, amongst a herd, at the same level as everyone else, you really realize that to the goats, they’re the people. They’re goats and we’re non-goat animals, if you see what I mean.

Being on four legs, amongst a herd, at the same level as everyone else, you really realize that to the goats, they’re the people. They’re goats and we’re non-goat animals, if you see what I mean.

AD: Would you recommend that other people emulate goats, even if only in modest ways?

TT: I think there is much to be gained, even from simply eating a few leaves directly from a tree with your mouth! Try it—it’s a very sort of “leveling” experience. It reminds you that you are also just an animal, very embodied, not just a thinking thing, shuffling information back and forth down the tubes of the Internet.

AD: Is there any part of the daily routine of a goat that humans would do well to incorporate into their own days?

TT: Galloping along together as a herd.

AD: *SPOILER ALERT:* The book ends with you crossing “the bridge from the real world into fantasy,” scaling the Alps to meet a man who falls from the sky. What really happened?

TT: Well, I was walking up this glacier and a parachutist landed next to me. We were pretty close to an extreme sports resort. By that time I was pretty exhausted, and well, I was pretty close to the border with Italy, but it all got a bit much… So, um, I walked off into the sunset, never to be seen again. Or something. 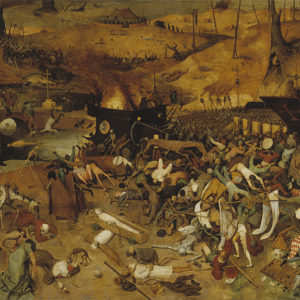 It wouldn’t be hard to assemble a canon of plagues in fiction. In some cases, the qualifications are emblazoned right...
© LitHub
Back to top
Loading Comments...