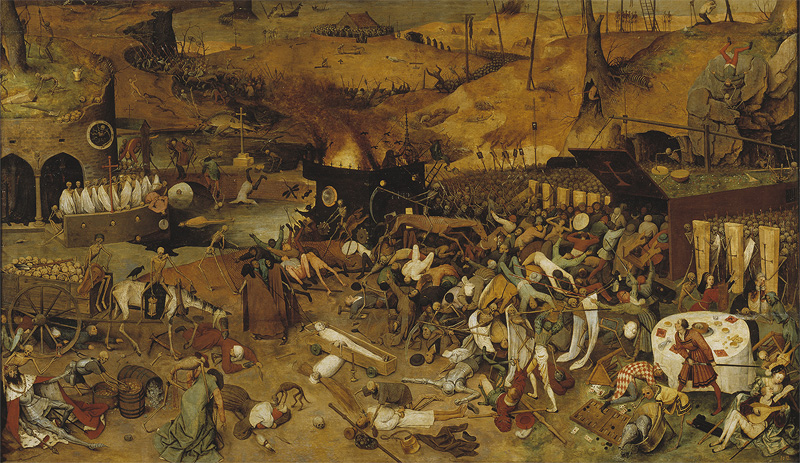 From the Historical to the Fantastic, How Disease Scars Us All

It wouldn’t be hard to assemble a canon of plagues in fiction. In some cases, the qualifications are emblazoned right down the spine: Albert Camus’s The Plague, for one, or Gabriel Garcia Marquez’s Love in the Time of Cholera. It also isn’t hard to see why the harrowing aspects of a plague make for a compelling element for many a novel. In the simplest terms, they heighten tension, creating a scenario in which the stakes of life and death are raised, and where characters become acutely aware of their own mortality. Someone grappling with big questions is one thing; someone grappling with big questions even as they and the people that they care about run the risk of horrific death is another—one with more urgency.

Literary plagues take many forms, from the true-to-life to the more fantastical. For a haunting example of the latter, there is Chris Adrian’s 2006 novel The Children’s Hospital, which plays out like a remixed version of the Old Testament. In it, the eponymous building becomes the last refuge of humanity after Earth is again flooded. The survivors within attempt to maintain some sort of civilization in the face of concerns both supernatural and mundane, but slowly, as the novel draws to its conclusion, a plague begins to decimate their number.

It was called the botch, and a person was said to be stricken with it or not. Almost everyone acknowledged that it was a curse from God, but speculation abounded on whether there was not some natural and therefore treatable mediating agent—a virus or bacterium or toxin.

An early description of the botch is hauntingly methodical: the stricken character notices some odd patches on her skin, ignores them until the effects to her health become too severe, and is then turned to ash by a paranormal attempt to cure it. It’s both a horrific image in its own right and a terrifying harbinger of the direction in which the novel is headed.

That’s the other thing about fictional plagues: they’re a great way to accompany the end of the world.

Yuri Herrera’s novel The Transmigration of Bodies (translated into English by Lisa Dillman) isn’t about the end of the world. Probably not, anyway. It’s an unpredictable work that unfolds in a number of directions over its brief length. At its most basic level, it’s about a man referred to throughout as The Redeemer, who is attempting to reduce tension between two warring families even as a plague settles over the city around them. But it’s also a stylized novel—stylized on top of stylized, to be honest. For one, there’s the name of the protagonist. The city in which the novel is set is at once historical and futuristic, a quality Herrera’s book shares with Vladimir Sorokin’s The Blizzard. (Which is also about a fictional plague, albeit one that results in a more familiar result: zombies.) And there’s also a knowingly literary aspect to the book, with echoes of the Montagues and Capulets in its two families, and a club called Metamorphosis.

Amidst all of this style, the disease acts as a grounding element. “The disease came from a bug, and the bug only hung around in squalid areas,” Herrera writes early in the book. “You could swat the problem against the wall with a newspaper.” True, but regardless, the disease has made its impact felt—one character warns her family against wearing perfume, lest they attract mosquitos that could infect them.

There are other signs that the disease may be more widespread, or more threatening, than its residents are inclined to admit. The Redeemer visits a pharmacy only to find it closed: “On the metal shutter, a piece of paper: Out of Masks.” Later, The Redeemer hands over a mask to one of his associates, a man known as the Neeyanderthal, or Neeyan for short, who demonstrates his contempt for the disease, wiping the mask across his mouth “like it was a napkin” and then discarding it. It speaks volumes about Neeyan’s fearlessness—or his recklessness.

In the world of Herrera’s novel, the fears brought on by plagues can spark change in society at large. “[L]ike everything, this too would pass, and the world would act innocent for a while, until it scared them shitless once more,” The Redeemer notes at one point after observing the complex body language that accompanies public sneezing. This disease is part of a cycle, then—a way for society to emerge as something different in the wake of something horrific. The nod to Metamorphosis, whether Kafka or Ovid, takes on a new dimension in light of this. And while The Transmigration of Bodies may exist in its own ahistorical space, that message can resonate when found in more historically rooted works as well.

Moonstone: The Boy Who Never Was, by the Icelandic writer Sjón, is largely set against the backdrop of 1918 Reykjavik, where the Spanish influenza is devastating the population. (The English translation is by Victoria Cribb.) Although lyrically told, it is largely realistic, its more dreamlike aspects emerging mostly within the context of disease or delirium. Here, the protagonist is one Máni Stenn (hence the novel’s title), a young gay man with an obsessive fondness for movies and an increasing awareness that something has gone very wrong in the world around him.

Much of the novel is told through the filter of Máni’s visits to the cinema—which, given the era, was then in a heyday of silent films accompanied by music. This is the status quo when the novel opens, which leads to vivid imagery as influenza begins to make its way through the local population. “[T]he cinemas have become ever quieter,” Sjón writes, here describing the epidemic in terms of the musicians who normally provide music for film slowly dwindling in number. It’s a particular window onto the city—but, given this novel’s protagonist, it’s an effective one. And soon, that silence has spread out of the theater to overtake the city as a whole.

An ominous hush lies over the busiest, most bustling part of town. No hoofbeats, no rattling of cart wheels or rumble of automobiles, no roar of motorcycles or ringing of bicycle bells. No rasp of sawing from the carpenters’ workshops, or clanging from the forges, or slamming of warehouse doors.

Later, Sjón will describe the symptoms of influenza in similarly lyrical terms, to powerful effect. At one point, he nods to the Irma Vep film Les Vampires—which, though not actually about the supernatural creatures its title might suggest, still creates a sense of unnatural languor, danger, and proximity to death. The juxtaposition of the two also recalls the scenes late in Werner Herzog’s film Nosferatu, in which the devastating effects of plague and vampirism overlap and desolation overtakes a city.

In Moonstone‘s final chapter, Sjón takes the book in a more overtly personal direction. Specifically, he works in several of his own relatives, including his uncle, who died as a result of AIDS in 1991—thus drawing a connection between two epidemics that bookended the 20th century. Máni’s familial history turns out to include leprosy, which further increases the contrast between Sjón’s elegantly written prose and the horrific effects of the diseases invoked throughout it.

In Moonstone, the admiration of some of Máni’s fellow citizens feel as a result of his actions during the epidemic is juxtaposed with their homophobia, which, by the end of the book, has turned violent. Plagues and epidemics can act as catalysts for societal change—Steven Johnson’s nonfiction work The Ghost Map examines the way a cholera epidemic in 1854 London led to advances in public health, for instance. But epidemics can also reveal the unpleasant qualities of people within those societies.

Dragonscale, the plague that devastates society in Joe Hill’s novel The Fireman falls on the more fantastical side of fictional epidemics: it’s spread via spores that cause tattoo-like marks to appear on the skin, and it makes the infected prone to spontaneous combustion. But in true Twilight Zone fashion, this condition turns out to be less threatening to humanity than its own basest aspects: intolerance, violence, and conformity.

Several explanations are given for Dragonscale throughout the book. One early chapter offers a pair of conflicting explanations: that it’s a Cold War relic, or possibly a biological agent created by sinister corporate types. Some characters interpret it along religious lines; others research more deeply into its ability to act parasitically (or symbiotically, depending on your perspective). But Hill, wisely, allows a sense of ambiguity to endure. Certain explanations are more plausible than others, but none is ever verified. From a narrative perspective, that makes sense: this is not a book about the plague itself, but about how it transforms society, sometimes literally.

Harper, The Fireman‘s protagonist, is a nurse working in New Hampshire as the novel opens. By this point, Dragonscale has already begun to sweep across the globe, but society remains largely functional. It’s not much of a spoiler to say that this condition does not persist: between increasing paranoia and the tendency of the infected to combust under tense conditions (often with a domino effect), institutional stability doesn’t stand much of a chance. Soon, Harper has linked up with a reclusive society composed of people learning to control their condition, on the periphery of which lives the title character, a man whose knowledge of Dragonscale ventures into the territory of pyrokinesis.

Though the early pages of Hill’s novel abound with fear of this condition—Will someone near Harper burst into flame? What impact would Dragonscale have on her life?—the most unnerving sections of the book focus on how a previously open community curdles into something authoritarian. That a group of misogynistic killers lurks on the fringes of the plot for a large stretch of the book doesn’t make things any easier for The Fireman‘s heroes. It also showcases a fundamental shift in society: from a basically supportive and communitarian space to one in which divisiveness wins the day, and fear of those who are considered to be the other overcomes everything else. Alternately: The Fireman starts out as a story about the ravages of a plague, and turns into a story about the ravages created by those who are unaffected.

Perhaps that’s overly didactic, but novels with plagues and epidemics are rarely subtle. In The Fireman, Moonstone, and The Transmigration of Bodies, disease is presented as a danger to society, but it also leaves a significant mark even on those who aren’t infected. It’s difficult to read any of these novels without thinking of the contemporary world: the fears faced by its characters aren’t too far removed from the fears faced by many right now. Some make those ties explicit—Hill’s novel features references to how a number of public figures fare in the age of Dragonscale, and the contemporary resonance of Moonstone has already been covered. Adding plague to a novel ratchets up the tension and the stakes and offers readers a disquieting reminder of their own vulnerability amidst the larger plot. But alongside suspense lurks a memento mori, its presence undeniable.

Feature image: Detail from Pieter Bruegel’s The Triumph of Death, 1562.

LISTEN: Paul Holdengräber talks to the poet Sjón about the importance of travel, keeping your audience awake, classical Nordic literature, the Future Library, and articulating the world. 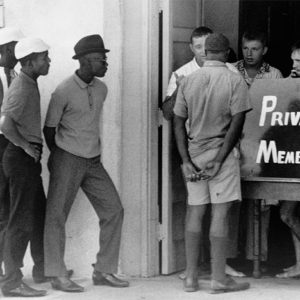 As long as I have been able to afford it in my adult life, I have found, whenever possible, a swimming pool. I learned to swim...
© LitHub
Back to top