I have a confession to make. When I’m writing, I’m almost always trying to be funny. Sure, the rules of society and literature and plot-building force me to sneak some serious things in every now and again, like divorce and financial crises and dying and all that. But, about 85 percent of the time, when I’m sitting here at my computer, caffeinated to the gills and flanked by two emotionally needy dogs, I’m just trying to get a laugh

Consequently, it probably comes as no surprise that for my entire reading life I’ve been most drawn to books whose authors, I suspect, were up to the same thing.

Below, you’ll find a list of seven such books, along with a bonus book, free of charge. In terms of subject matter, they’re all over the place: from a classic send up of academia to a woman coping with her father’s Alzheimer’s disease to a grown man swearing about birds. The link, though, is that each of these books will make you laugh.

And, when I say laugh, I mean LAUGH—all caps. I’m talking snort-laughter here. These are the kinds of books that make you look like an insane person on public transport. That ruin perfectly good shirts because you spit Diet Dr Pepper all over yourself. That cause your wife to roll over at midnight and say something like: “Matt, seriously, I have a meeting in the morning, please shut up. Also, are you eating Doritos in bed again?” 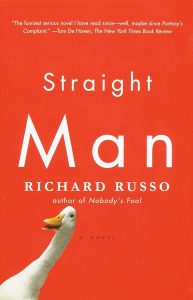 After a quick prologue, Straight Man begins just after our main character, creative writing professor Hank Devereaux, Jr., has his nose impaled by a colleague’s spiral notebook, and…well, it goes on from there. Comedically speaking, the narrative voice is pitch-perfect, and the plot is full of hilarious dramatic action—fueled mostly by Hank’s relentless determination to make the exact wrong decision whenever possible. In addition, Richard Russo offers a valuable piece of advice for young writers: “Always understate necrophilia.” 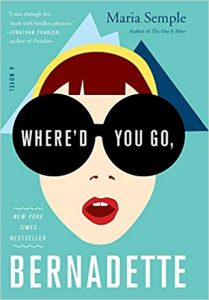 Like any writer, I seethe with open hostility whenever I read a book that’s “too” good. That was definitely the case with Where’d You Go, Bernadette. The zaniness is fun and infectious, the insights are brilliant at every turn, and the laugh-out-loud humor feels so natural that it gives the illusion of effortlessness. If you missed it a few years ago when EVERYONE was reading it, go get it ASAP. I suggest borrowing it from a friend or shoplifting it, though, because… how dare you, Maria Semple. 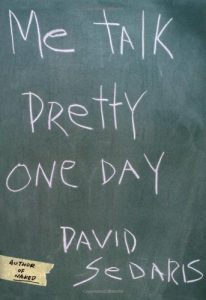 A little obvious, right? Like walking up to some teenagers who are talking about basketball and suggesting that they check out LeBron James. But, like LeBron, David Sedaris is a living legend. We could argue all day about which of his very funny books is funniest, but, for me, Me Talk Pretty One Day remains his comedic masterpiece. Seriously, I dare you—DARE YOU—to get through the essay “You Can’t Kill the Rooster” without pulling a muscle. 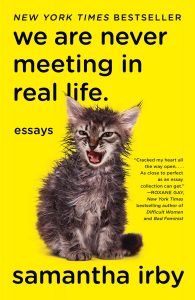 Samantha Irby, We Are Never Meeting in Real Life

Not to sound overly romantic here, but you just know that Samantha Irby’s books are going to be funny before you even read them. Pick up We Are Never Meeting in Real Life and you’ll know what I mean. The thing buzzes in your hand—practically hot to the touch. Same goes for the essays within. They’re cringy and human and fearless in the best and funniest ways possible, and, just as important, they’re empathy-building machines. If I ever meet Samantha Irby in real life, I’m going to hug her. And, if I get roughed up a little by security in the process, it’ll be worth it. 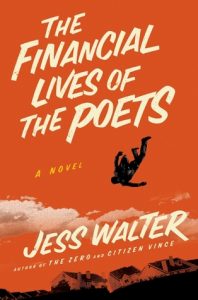 Jess Walter, The Financial Lives of the Poets

Jess Walter is ridiculously talented, and he’s celebrated accordingly. Financial Lives of the Poets is my favorite of his books, though, because it’s his most unabashedly funny. A journalist quits his job to launch poetfolio.com, a website that combines financial news and blank verse. What? Exactly. It fails, of course, which leads to fiscal ruin. In an attempt to redeem himself, our narrator, Matthew Prior, stumbles into a scheme that’s even riskier than money poems…and far more dangerous. Jess Walter is satirizing the American Dream here. Unsettling? Very. But, it’s also comedy gold. 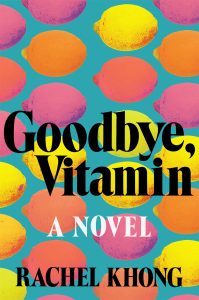 I’ve read Goodbye, Vitamin a couple of times now, and, I still don’t know how Rachel Khong pulled this thing off. Here’s the elevator pitch: a broken-hearted woman moves back home with her parents to help out as her ailing father slips further and further into dementia. Sound hilarious, right? But, here’s the thing: it is! It’s a classic case of Humor as Trojan Horse, and it’s amazing. Just as the sadness threatens to overpower the narrative, boom, a perfectly whimsical turn of phrase saves the day. You know what? How dare you, too, Rachel Khong! 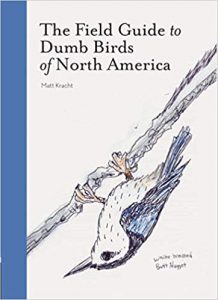 And sometimes, you just need something silly in your life. And, holy shit, this book is the silliest. Like the title suggests, it’s set up like any one of the countless “birding” manuals that you’ve seen, maybe at your grandpa’s house. The twist, though, is that instead of paying reverence to the birds of North America, Matt Kracht makes fun of the chattery little bastards by calling them names and detailing just how stupid they are. The swearing is top-notch, and the birds—bless their dumb little hearts—come off as lovable, dim-witted heroes. 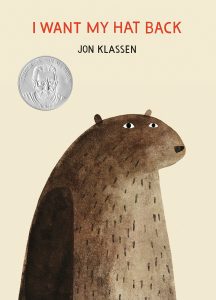 Jon Klassen, I Want My Hat Back

If you’re a parent like me, you like the idea of your kids being literate. Unfortunately, children’s books can be monotonous, particularly at bedtime when your nerves are shot and you’re exhausted from doing whatever the hell it is that you do all day. I suggest I Want My Hat Back. A bear retraces his steps back through the forest in search of his missing hat, encountering animals along the way. The writing is Bob Newhart-style deadpan and the illustrations, complete with lots of blank animal stares, are a delight. It’s so good that you’ll have no problem reading it again and again and again and aga… 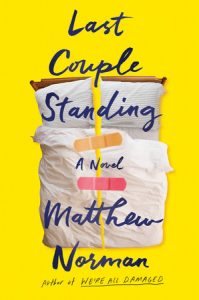 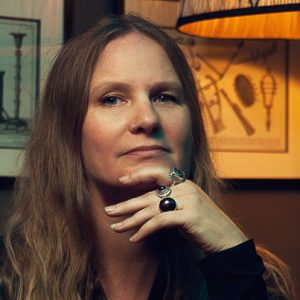 This week on The Maris Review, Lidia Yuknavitch joins Maris Kreizman to discuss her story collection, Verge, out now from...
© LitHub
Back to top
Loading Comments...