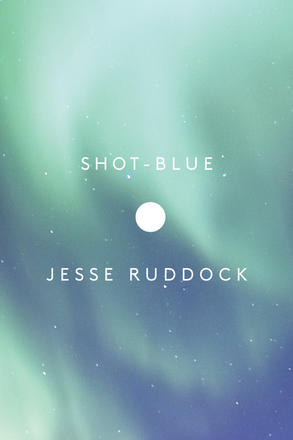 The following is from Jesse Ruddock’s debut novel, Shot-Blue. Born in Guelph and based in New York, Ruddock first left Canada on a hockey scholarship to Harvard. Her writing and photographs have appeared in the NewYorker.com, BOMB Magazine, Music & Literature, and Vice. This is her first novel.

The guides took turns fishing off the dock, and it was Tristan’s turn for casting lessons at five o’clock. Five wasn’t a good time. The bass were stuffed from hunting in full sun. If you managed to catch one, its fight would lag and it would rise to the surface throwing up wan, shredded, half-digested minnows, little pieces of flesh that looked like they’d been run through a washing machine. The walleye didn’t rise to the surface to feed until dusk, two or three hours from now, and even then they couldn’t be caught off the dock, only in less trespassed waters. The lake trout were at fifty feet, too deep for casting.

The interest for him wasn’t in the fish, but in seeing if the people would be defeated by reaching out and touching nothing.

Four women tightly dressed face the water. The first three held their bodies with apprehension, as if anything might happen to them and they couldn’t be ready. They were pretending to be more nervous than they were because that was fun. The fourth, standing at the far end of the dock, away from him, was much taller and stranger than the others. It was hard to tell if she was a woman or a girl. Her face was a young woman’s, fresh under the eyes. Her dark brown hair tied back under her hat was, Tristan had to think, a lot like his. But her shoulders and back were all bonework. Under a loose white shirt, they called fossils to mind. It was Stella, but he didn’t know that.

The first three held their fishing poles away from their bodies. They didn’t make a move without instruction. But this one, at the end, looked down over the edge and held her pole close to her body, running the line through her fingers to feel if it was brittle or smooth. He always checked his line like that. He guessed she could cast as far as he could.

The sky was a tableau to the north, with clouds blooming like it was their last chance before a frost. As they bloomed, they grew darker, rose and twisted in conflicting winds, and would come to ground. These clouds would be as tenacious in crumbling as they were in building up like this.

He saw it coming. He knew she saw it too. There was no wind blowing across the dock, but there would be.

‘Let’s collect ourselves,’ he said, ready to begin.

‘If I collect myself, I’ll die,’ said Stella impatiently, but no one could hear. ‘There’s no question anymore,’ she said, ‘there never was. I used to collect things, but they fall apart.’ It gave her pleasure to say so. That no one could hear made it better.

Tristan took his pole and shook it to show its give. ‘When you’re ready,’ he told them, looking over the water, ‘you can cast from this side or the other.’ And as he spoke, he showed them, but with his lure fastened a couple feet out. ‘You can be casual and flick your wrist.’ He flicked his wrist. ‘Or you can shift your weight and throw yourself into it.’ He opened his stance and showed them what he meant.

People always wanted her to think and feel for them. Here, on this dock, she had only to feel the wind that was coming. Sometimes she didn’t want even this much responsibility. The wind was indifferent, but it took her over. Most people would not have felt it or seen it in the trees, but Stella was sensitive to her solitude breached: the more subtle the breach, the more she perceived it. And this wind was false in its warmth. All winds carried messages. She knew the rain would be cold today. The wind’s warmth was a sleight of hand; if she was taken in by it, she would only be more cold in the end. If she missed home, the deep south of her childhood–and she didn’t, knowing nothing softens the brain like nostalgia–if she missed home, she missed the rain. In the morning if it rained, it was warm rain. In the afternoon, warm rain. In the middle of the night, at three or four, raining as she was coming home from the bar: warm as blood. Maybe not always, but that’s how she remembered it. In the city now, even if the air was ninety degrees and the trees were labouring to breathe, and everything metal–from her earrings to the taxi door handle–burned to touch, the rain still fell cold. Cold rain didn’t bring anything. It brought relief from the heat, physical relief, but no soul’s respite. It didn’t smell of plants and animals. It didn’t bring the children outside.

Stella ran the line through her fingers and felt capable of doing something beautiful easily. ‘Maybe the rain will wash me away and I’ll miss my chance,’ she said, still only to herself. ‘Where will I wash up? Will there be others? I don’t want to be followed.’ She rocked a little at the edge of the dock, making the others nervous, which she could feel and liked. ‘Maybe I won’t get washed out, I’ll be a shore.’ Here was the question she’d been looking for, seeing the sky in the water. ‘Maybe I won’t feel anything then?’ She felt a few drops of rain.

‘You can watch,’ Tristan said, his voice timorous but body sure as he swung his pole behind his back and whiplashed it forward. He let go of the line with a light snap and his lure flew low over the water.

She didn’t look at him but knew he was there, a boy, and there were the others but they didn’t have anything to do with her. She could see through them like shadows, even walk through them. She could step over them without lifting her knee high.

The other women tried. Stella and Tristan watched them, Stella with disgust and Tristan with some concern that they would soon blame him for not being able to do it.

Stella and Tristan saw each other through the others but made no sign there was something they shared. Independently but at the same time, it struck them through. They didn’t know each other but didn’t like each other, and maybe hated each other. Stella wanted him to be negligible and Tristan wanted her to go back to where she came from. He couldn’t see her face clearly under her hat–he wanted to and didn’t want to. Another afternoon and they might not have been so quick to feel defensive, such natural enemies, but the sky abloom was like music urging them to feel more right now–not to wait, but to do it, as the clouds broke into a downpour of raindrops, the first few huge, hitting the dock like wads of spit.

Stella stopped rocking. Tristan put his hands in his pockets, something he never did. Don’t look at me, he thought. Why was she looking at him? Who do you think you are? she wanted to ask, feeling him recognize her. He recognized her whole way of being, a ruse to make people keep their distance. It was in him to do the same thing.

Stella lowered the drag on her reel and pulled out a generous lead. The first thing she felt was the weight of her lure and it pleased her, heavy enough to carry far.

The other women watched in admiration as she went through a motion so practised she might have been running her hands through her hair.

Behind the dock were shrubs with branches worn bare by the constant rinse of waves. They were more like piles of wire than living and breathing things. On her backswing, Stella’s lure touched them, and to touch was to be caught.

She snagged. It was a common mistake, but the breath it held back was uncommon and she sighed.

The other women echoed her sigh, an obedient choir ready to do her bidding.

Tristan almost sighed with them, but covered his mouth and yawned instead.

Sighing wasn’t something he did.

She might have taken out some slack, but instead pulled so hard her pole bent like a ready bow.

The boy was saying something now, but of no use to her. ‘I’ll get it!’ he was saying. He was here.

To make him get back, Stella pulled harder.

Drops of rain struck her face and hands. It was cold rain.

She pulled so hard her line might snap. She could feel it stretch. ‘I’m getting it,’ the boy told her. But she was getting it.

When her pole whiplashed, her body relaxed, understanding it was over–at the end of her line was nothing but a spit of air. But the line hadn’t broken. The lure was let go wild and precise as a slingshot. The hooks shook against the body of the lure, they all heard it. Then the hooks were silent, they heard that too. The lure didn’t strike so much as stick under the eye, sinking into the ridge of her cheekbone. The hooks sunk in the way the prongs of a fork sink and disappear into a cake to see if it’s cooked through the middle. But unlike the fork, which slips out when you pull up, the hooks were barbed, and if pulled now would tear her cheek apart.

Tristan came up close to her.

‘I said cut the line,’ she told him calmly.

She hadn’t said to cut the line, but Tristan understood what she was telling him: he shared the blame.

He took out his pocket knife and worked on cutting the line. It wasn’t quick work because he needed to be careful not to pull on the hooks curled into her skin.

‘What are you doing?’

The rain was coming down now and his hands were wet and shaking too, because they were so close.

When the line fell away, she stepped back and told him to find someone.

He would, he said, but he didn’t turn to go. He couldn’t stop taking looks at the lure hanging off her face. It was one of his, a minnow crankbait, black-bodied with a gold stripe down the back, head to tail. It had fleck orange eyes.

From SHOT-BLUE.  Used with permission of Coach House. Copyright © 2017 by Jesse Ruddock.

When Femininity is Code for Feelings 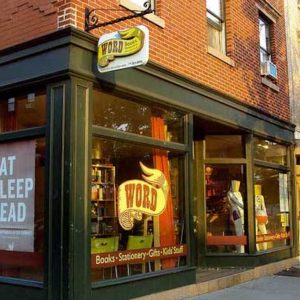 How Working at a Bookstore Changed My Writing Career I was one of those regulars who lingered too long at the counter, but I was excited like everyone else in North Brooklyn...
© LitHub
Back to top