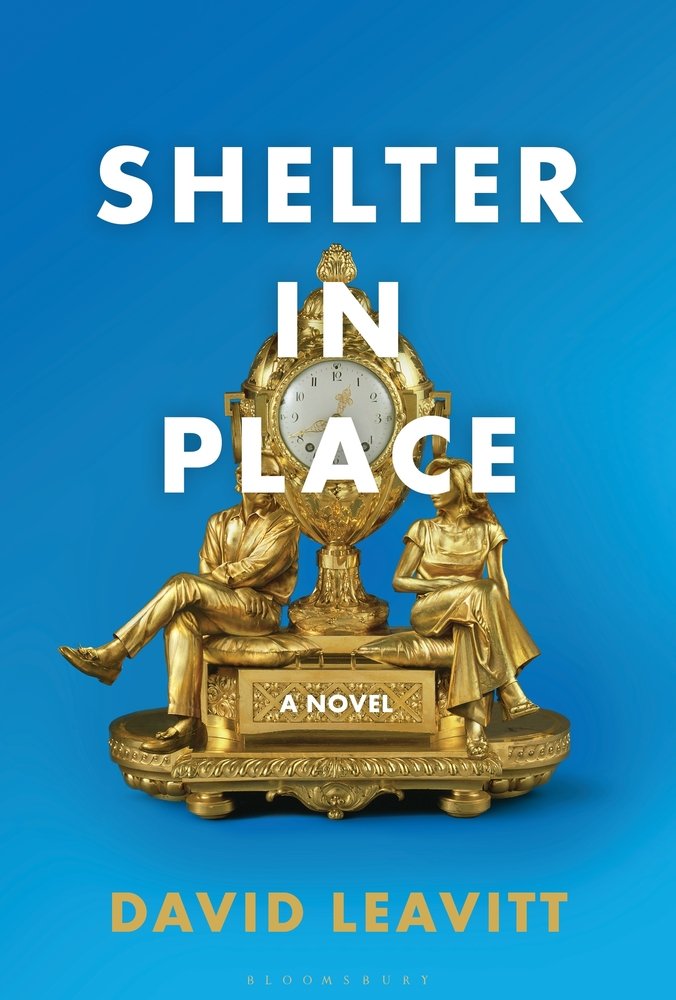 The following is excerpted from David Leavitt's latest novel, Shelter in Place, which takes place the Saturday after the 2016 U.S. Presidential election. Leavitt's novels and story collections include Family Dancing, which was a PEN/Faulkner Prize finalist and received the National Book Critics Circle Award. He is also the author of two nonfiction books and co-directs the MFA program in Creative Writing at the University of Florida, where he is Professor of English and edits the journal Subtropics.

“Would you be willing to ask Siri how to assassinate Trump?” Eva Lindquist asked.

It was four o’clock on a November afternoon, the first Saturday after the 2016 presidential election, and Eva was sitting on the covered porch of her weekend house in Connecticut with her husband, Bruce; their houseguests, Min Marable, Jake Lovett, and a couple named Aaron and Rachel Weisenstein, both book editors; Grady Keohane, a bachelor choreographer who had a place down the road; and Grady’s houseguest, his cousin Sandra Bleek, who had recently left her husband and was staying with him while she got herself sorted out. Not sitting on the porch was Eva’s younger friend Matt Pierce—younger in that he was thirty-seven.

He was in the kitchen, preparing a second batch of scones after having had to throw away the first, to which he had forgotten to add baking powder.

A benevolent autumn sunset illuminated the scene, which was one of comfort and ease, the porch warm from the woodstove and the guests snug on the white wicker chairs and sofa, the cushions of which Jake, Eva’s decorator, had covered in a chintz called Jubilee Rose. On the white wicker table, a pot of tea, cups, saucers, a bowl of clotted cream, and a bowl of homemade strawberry jam awaited the tardy scones.

Eva repeated her question. “Who here would be willing to ask Siri how to assassinate Trump?”

At first no one answered.

“I’m only asking because since the election, I’ve been possessed by this mad urge to ask her,” Eva said. “Only I’m afraid that if I do, she’ll pass it straight on to the Secret Service and they’ll arrest me.”

“What, listen in on what we say to our phones?” Sandra said.

“I’m not saying they can’t do it,” Bruce said, “I’m just saying that in all probability, the Secret Service has better things to do than monitor our conversations with Siri.”

“Can cell phones be tapped?” Rachel Weisenstein said. “I thought only landlines could be tapped.”

“What century are you living in?” Aaron asked his wife.

“I mean, if we were terrorists, maybe,” Bruce said. “If we were an ISIS cell or something. But a bunch of white people drinking tea on a covered porch in Litchfield County? I don’t think so.”

“But I don’t want to assassinate Trump,” Bruce said.

Suddenly Aaron had one of his famous tantrums. “You people,” he said. “Will you just listen to yourselves? I mean, look what’s happening to you. Is this really happening? Don’t we have a First Amendment in this country? Don’t we have the right to say whatever we damn please?”

A benevolent autumn sunset illuminated the scene, which was one of comfort and ease, the porch warm from the woodstove and the guests snug on the white wicker chairs and sofa.

“Speaking for myself, I’d be disinclined to take the risk,” Min said. “What about you, Jake?”

“The thing is, even if you did kill him, would it do any good?” Sandra said. “Pence would be president. That might actually be worse.”

“You mean it’s a sort of thought experiment,” Sandra said.

“Oh, for God’s sake.” Aaron took his phone out of his jacket pocket, pressed the home button, and said, “Siri, how would I—”

“Give me my phone,” Aaron said.

“That may be beyond my abilities at the moment,” Siri said.

“Only if you promise not to do it,” Rachel said.

“Rachel, I’m asking nicely,” Aaron said. “Give me back my phone.”

Right then Matt Pierce came onto the porch with the scones. “Sorry for the delay,” he said. “Normal service has been resumed . . . What’s the matter?”

She threw the phone at him and ran into the house.

Everyone looked at Aaron.

“Don’t those scones smell delicious?” Eva said. “But I fear the tea may have oversteeped.”

“I’ll make a fresh pot,” Matt said, backing through the door that led to the kitchen.

In the winter of 2016, Eva Lindquist was fifty-six but looked ten years younger. Though tall, she did not give an impression of height, perhaps because Bruce, her husband, was so much taller, nearly six foot six. Given her last name, many people assumed her to be of Scandinavian descent, an impression she did little to counteract and more than a little to cultivate, most notably by tying her hair in plaits and wrapping them around her head.

“But I fear the tea may have oversteeped.”

She and Bruce had no children. Instead they shared their homes—the apartment on Park Avenue and the country house in Connecticut—with three Bedlington terriers, those dogs that look like lambs or seals, with their feathery blue-white coats and curved backs and long, tapering tails. The current pack was their second generation of Bedlingtons, littermates, as their forebears had been, and named, as their forebears had been, after characters from Henry James—Caspar, Isabel, and Ralph.

Unlike Bruce, Eva was a New Yorker born and bred. Her parents—this was something she neither advertised nor concealed—were Polish Jews.

Bruce was from Wisconsin. Lutheran. For four decades his father had been the leading obstetrician of Oshkosh, in which capacity he had delivered two state senators, an NFL offensive guard, and a singer on The Lawrence Welk Show. Bruce was in his third year at Harvard Business School, on the cusp of turning twenty-four, when he met Eva, then in her senior year at Smith. In their wedding photos they look nothing alike, which surprised their friends, for whom it was a commonplace to remark that they might be brother and sister. Both had fair skin that burned before it tanned, and hair the same silver-blue as the coats of their dogs, and eyes that radiated a greater uncertainty than either was in the habit of voicing.

“Amazing how couples grow to look alike,” their friends would say, when what they meant was “Amazing how he has grown to look like her.”

Jake Lovett had first met them in the late eighties, when they’d just moved into a new apartment, several blocks uptown from the current one, and Eva had asked his business partner, Pablo Bach, to decorate it. Since Pablo considered rentals beneath him, he passed the job on to Jake—Jake’s good fortune, as it turned out, for when the building went co-op, and Eva and Bruce bought a bigger apartment on a higher floor, it was him, not Pablo, whom they hired to oversee its refurbishment.

Since then they’d moved twice more, both times selling at a profit. All these apartments Jake had decorated, just as he’d decorated the succession of country houses—in Rhinebeck, in Bedford, in Litchfield County—that the Lindquists had acquired and sold off as Bruce’s income soared. Theirs was a milieu with which Jake was familiar—affluent New York liberals, not old money but not new money, either, and certainly a far cry from the city’s aristocracy, the Whitneys and Vanderbilts and Astors, over whose drawing rooms Pablo held sway. With a few notable exceptions, those people eschewed intellectual pretensions—they had no need of them—whereas Eva liked to think of herself as a saloniste, in which capacity she hosted frequent dinner parties and tea parties and weekend parties, to which she invited a motley of gay men and unattached middle-aged women and married couples vaguely affiliated with the arts—editors, curators, agents—as well as the occasional elderly lady who, when drunk, could be counted on to tell risqué stories about famous dead people.

No actual creators. Creators scared Eva. Unless you counted Jake as a creator, which he didn’t think she did.

As for Bruce, if he had any friends—Jake had never seen evidence of any—they were not included. Bruce was an easygoing fellow, content to follow Eva’s lead. Outwardly, things looked like smooth sailing for him and Eva, until she decided to buy the place in Venice.

Jake Lovett had first met them in the late eighties, when they’d just moved into a new apartment, several blocks uptown from the current one.

“You’re wrong,” Eva said. “Nothing in our lifetimes has been worse.”

“Or 2000,” Bruce said. “Remember all that hoo-ha down in Florida? The butterfly ballot, and the hanging chads, and the pregnant chads?”

“There were dimpled chads too,” Aaron said.

“That was definitely not a good year to be named Chad,” Grady said—a joke that elicited some hesitant laughter, though not from Eva, who took the opportunity to pour herself another glass of pinot noir. It was eight o’clock on the evening of the Saturday that the friends who were gathered around her table, eating spatchcocked chicken and oven-roasted beets, would forever after remember as “the Saturday of the botched scones.”

“Now I look back at the 2000 election and I see it as the dress rehearsal for this one,” Eva said. “Before that—I checked online—do you know when was the last time the winner of the electoral college lost the popular vote?”

“And what if things had gone the other way?” Bruce asked. “Would you feel the same if Hillary had won the electoral college but lost the popular vote?”

“It couldn’t have happened,” Aaron said. “To have won the electoral college, she’d have had to win Ohio and Florida, in which case she still would have won the popular vote, only by a bigger margin.”

“And my answer to it,” Eva said, “is that if the scenario were reversed, I’d be defending the electoral college to the death. So would the rest of you, though I doubt you’d admit it. That’s the difference between us—I’m willing to be inconsistent. I’m willing to say openly that protecting democracy matters more than protecting a system.”

“But I thought democracy was the system,” Sandra Bleek said. “Not when it’s used to benefit the people who want to undermine it.”

“It could be argued that when you take that line, you become one of those people,” Bruce said.

“I’d be defending the electoral college to the death. So would the rest of you, though I doubt you’d admit it.”

“Or ask Siri how to kill?” Grady said.

“Well, we killed bin Laden,” Eva said. “I don’t recall anyone objecting to that. And let’s not forget Hitler. All those people who tried to assassinate Hitler—today we look at them as heroes.”

“When my mother was dying, she used to joke about organizing a hit squad of terminally ill people to take out Reagan,” Jake said.

“He was not nice,” Grady said. “Have you noticed that lately, every time you turn on the TV, some old liberal’s yammering on about what a great diplomat Reagan was, and how civil the Reagan years were, yadda yadda yadda? It drives me nuts. I mean, does no one remember AIDS? How he wouldn’t even say the word?”

“From wherever she is”—Jake looked up, then down—“I hear my mother shouting, ‘Hear, hear!’”

Excerpted from Shelter in Place by David Leavitt. Copyright David Leavitt © 2020. Reprinted with permission of the publisher, Bloomsbury Publishing. 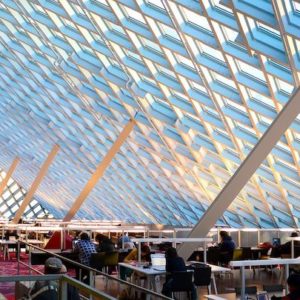 What Are the Responsibilities of a Literary Institution? The quality of light by which we scrutinize our lives has direct bearing upon the product which we live, and upon the changes...
© LitHub
Back to top