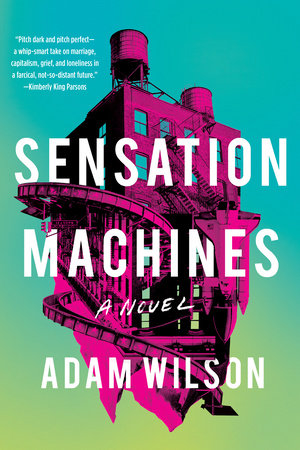 The following is excerpted from Adam Wilson's new novel, Sensation Machines, a rendering of a Post-Trump America in economic free fall. Wilson is the author of Flatscreen, and was the recipient of the The Paris Review’s Terry Southern Prize for Humor. His work has appeared in Harper’s, Tin House, The Paris Review, and The Best American Short Stories, among other publications.

The coffee shops by Ricky’s apartment were Starbucks or Starbucksian: corporate, cleanish, out of toilet paper. In the case of the one that I entered, the bathroom was not out of toilet paper, but out of order. At least, this was the explanation offered by the handwritten sign on the door. The sign had been affixed with what looked to be an entire ream of Scotch tape. The tape tried too hard to convince. Here, I speculated, was a pristine bathroom, moated by sign and tape so as to banish the errant pissers who wreaked havoc each morning, forcing the store’s lone human employee to spend his lunch breaks scrubbing. The workforce was fighting back. I opened the door.

“Shit,” I said, because there was a lot of it on the floor.

I’d worked in the industry since college, when I interned with Ricky at Merrill Lynch. I was 26 when the housing bubble burst, but the nature of derivatives was such that vast degrees of separation existed between the families who’d taken out subprime loans and the guys like me who’d blindly traded CDO packages, each of which contained literally thousands of these mortgages. I’d been trained to imagine my market movements as purely hypothetical, a grand-scale sudoku that would increase my annuals without affecting the mechanics of American life. We weren’t Nazi soldiers following orders, but entrepreneurs following the rooted imperatives of our system, the promise that success comes at the expense of faceless others.

These others were out of sight, in Middle America, a place that mostly existed, for me, in midcentury novels by the Great White Males who’d been extinct for some time. And though I grew up an heir to financial depression, I still had trouble picturing the boarded-up houses and tent cities, the families ruined by debt. I couldn’t fathom the fallout from our actions, the factory closings and depleted pension funds. I couldn’t see how this recession would shape the next decade’s economy and lead to the current crisis. If I could see those things, I couldn’t connect them to what I was personally enacting.

There’s a long version and a short version of how I lost all my money. The long version is boring, and involves balance sheets and credit swaps, the broken dream of Detroit’s renaissance. It involves failures of predictive modeling and optimistic long positions. It involves the death of my daughter and a new inclination toward risk. And, if I’m being truly honest, it involves a not-insignificant measure of greed.

The short version is simple: I bet on America.

I soon found myself poorly leveraged, my liabilities threatening to outweigh my assets, and my sympathies for left-wing ideology steadily increasing. So while it would be easy to brag of my altruism by asserting that my shifting beliefs were based on a comradely desire for systemic fairness, the real source of my newfound empathy was that the system had failed me as well. I’d done all the right things—gotten the right job, married the right woman, made the right purchases based on Amazon’s recommendation engine—and I’d ended up with a dead child, a slumping marriage, and financial ruin.

I waited in line, waited for my pills to kick in, watched the coffee junkies queuing for their fixes: eyes glued to shoes, hands darting in and out of pockets, feeling the phantom buzz of their phones. I checked my own, which had been ringing with clients, debt collectors, and this morning’s half dozen missed calls from Wendy. I didn’t call anyone back.

When I reached the counter, the tele-barista said, “Good morning.”

It was twelve hours earlier in Manila, and I could see the blinking city through the window behind his head. These cyborgs combined the precision of automation with the frugality of outsourcing to provide a uniquely shitty customer service experience, though it’s worth noting that they rarely messed up an order. Their monitor heads livestreamed humans in the Philippines who remotely operated the robot bodies that brewed the coffee.

“And good evening to you,” I said, hoping to get a laugh in response, though, like the baristas of old, my guy was humorless, an underpaid teen with no time for chitchat.

“My name is Arnel, may I take your order?”

I told him what I wanted, and Arnel nodded, and a door opened in the robot’s belly. I watched my coffee being poured.

“I don’t mean to be the bearer of bad news,” I said, “but someone appears to have shat all over the bathroom floor.”

“Are you reporting an act of vandalism?” said Arnel. “Do you wish to lodge a formal complaint?”

His face was too close to the camera. I could see my reflection in his eyes. His question seemed like a trick or a threat. I was wary of reporting anything in an official capacity, afraid of paperwork or a delay in service.

“I’m just saying maybe someone should clean it up.”

“Copy that,” said Arnel, and he must have clicked his mouse or hit a key, because a siren went off above the bathroom door. The store’s human employee came pushing a mop bucket to meet it. She typed a code into a wall panel that turned the siren off. I didn’t understand why the bots couldn’t clean bathrooms while the humans served guests. I’d been told they didn’t have the dexterity. A metallic arm extended my coffee toward me. I wished Arnel a good day.

Ricky wasn’t answering his cell, but I was friendly with Donnell, his doorman. When he wasn’t signing for packages, or working evenings hawking iPhones at a Verizon store, Donnell wrote a blog that considered sports and pop culture through the lens of his life as a single dad. He was an excellent writer and, if the universe were remotely fair, he would have been writing for a larger audience than his few hundred daily readers, and for more coin than he got running banner ads. Years ago, I’d endeared myself by donating discards from my sneaker collection as giveaways for the blog’s donation drive, and, ever since, Donnell and I had enjoyed a rapport, longing for the days of pre-replay refereeing and the great elbow throwers of yore.

When I arrived in the lobby, Donnell did not look up. A book was open in his lap, and the doorman bent over it, presenting his graying Afro to anyone who entered. Donnell, I knew, was roughly my age, but he looked prematurely life-worn with his Don King haircut and plastic rim bifocals, his food-stained doorman’s gold-button blazer. On his desk sat a half-eaten egg sandwich. A peek of a circular sausage stuck temptingly from the bread’s square edge.

“You gonna finish that?” I asked.

Donnell nudged the sandwich in my direction. He closed his book and placed it face up on his desk; it was a hardcover copy of Sarah Jessica Parker and Matthew Broderick’s co-authored self-help book, Bueller? Anyone? Sex After Sixty.

He was referring to the Knicks. These were rough times for the team, coming off four seasons in the cellar and Spike Lee’s defection to the Milwaukee Bucks.

“Oh, come on,” I said. “At least your boys looked cute in those new uniforms. What would you call that color? Rust? Ocher?”

I considered sports expertise my Massachusetts birthright. In Mass, even dandies and high femmes could hold their own in discussions of the Patriots’ depth chart. I liked New York, where sports knowledge still suggested masculinity, and where I, a white-collar wuss, could penetrate the ranks of quote unquote real men by watching SportsCenter in bed. My discussions with Donnell were self-affirming, our easy banter supporting the delusion that I was not a snob looking down from his tower of privilege, but a streetwise code-shifter with working-class black friends. Or, at least, with one working-class black friend. That this friend had little choice in the matter of our friendship was something I willfully refused to acknowledge.

“Interesting choice of reading material,” I said, and lifted the book. I skimmed its pages, which were filled with notes and underlines.

He was a man of theories, a writer who relished the challenge of selling difficult arguments, and who, with humor and insight, often managed to succeed. A recent post defended NBA salaries from a Marxist perspective. In Donnell’s hands, the league’s millionaires became labor incarnate, staffing the only industry that granted its workers just revenue share.

I admit that I was jealous of Donnell’s aptitude. His blog’s modulation between high and low registers was exactly what I was trying, and failing, to achieve with Eminem. For months, I’d been too embarrassed to bring up my own project during our weekly discussions. In part, the reason was obvious; Donnell was a writer, and I was a wannabe. But there was also a racial element to my reticence. I didn’t want to come across as a try-hard white guy whose scholarly knowledge of hip-hop betrayed a fetishistic aspect to his interest.

I was a Jewish teen in the 1990s, meaning hip-hop soundtracked my seminal years. It was pumped into malls, played at school dances, taped off the radio, and traded on mixtapes at camp. I got a shortwave radio for my bar mitzvah, and the first thing I did was search the airwaves for Hot 97, the mythological station of Summer Jam fame.

But while friends like Ricky found themselves reflected in, say, Phish’s maple syrup funk, part of hip-hop’s appeal was that it wasn’t a mirror, but a window into a foreign world. Which is to say: I loved hip-hop both in spite of and because of the fact that it wasn’t mine to love.

And then there he was, with his bleached hair and Kmart wardrobe, his pill-popping mom and lower-middle-class angst. I identified with Eminem so strongly it scared me, given his homophobia, misogyny, and nihilistic rage. I told myself that this was only a persona used for pushing boundaries, and that all that really mattered was Em’s level of skill. But even the latter was a controversial topic. To proselytize too hard for a white rapper’s talent was to risk promoting Caucasian exceptionalism. I worried that I’d have to face these questions if I ever wrote my book.

“So how does Carrie Bradshaw fit into your theory?” I asked Donnell.

“How doesn’t she fit, is what you should be asking.”

“You’ll get it when you read the piece. That is, if I ever find time to write again. Jackie’s home on winter break, the other doorman’s on two-week vacation, and Verizon has a sick day policy to rival the Führer’s.”

Donnell released a puff of air in a manner that told me I couldn’t understand. It said that I, with my food grubbing and demand for banter, only added to his woes. I knew about Donnell’s money troubles from his blog: bank-breaking debt, a shitty mortgage on a money pit apartment. Our situations, I understood, were fundamentally different. For a moment, I wondered if he actually liked me, or whether I was just another asshole with whom he was forced to interact. Perhaps it’s testament to the triumph of self-deception, but I refused to accept that the latter was the case.

Excerpted from Sensation Machines by Adam Wilson. Copyright © 2020. Reprinted with permission of the publisher, Soho Press. 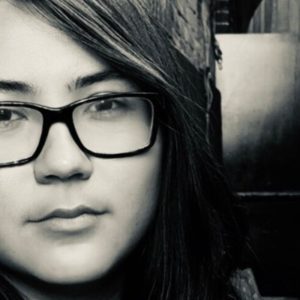